The Americans is over, and it ended its near-perfect final season in the perfect — and a perfectly Americans — way.

Joe Weisberg and Joel Fields made a hell of a series. It was very good at being a spy show, which is what it ostensibly was — some targets we’d see only briefly, others would linger for seasons, and still others for years; the fights were bloody, the thrills thrilling, and the wigs top-notch. But underneath, even when people were ending up in suitcases or getting dismembered in parking garages, it was always a story about a marriage and a family. In its finale, it reaffirmed that, one tragedy and heartbreak and connection at a time. In doing so, it solidified its place as one of the great American dramas, and in my opinion, at least, easily earned a spot in the series finale hall of fame.

But none of that feels important right now. Part of what made the incredible performances of Matthew Rhys, Keri Russell, Noah Emmerich, Holly Taylor, Alison Wright, Margo Martindale, Frank Langella, and others so vital, so deeply felt, is the tension that often emerged when the task at hand ran counter to the emotion under the surface. That tension always added another layer to an already layered show, so Philip could speak to Kimmy with tenderness, but also remorse and also self-disgust and also grief. So much grief. Years of grief. And here I sit, a humble television fan, assigned the task of analyzing this work of art while under the surface, all I want to do is sob a bit more and watch that train blow by, again and again.

But there’s a job to do.

Below, you’ll find some thoughts on this nearly perfect season of television, which is also one of the great final seasons in TV history, and a few briefer thoughts on the series as a whole. You’ll find a quick conversation with Matthew Rhys and Keri Russell, who generously took the time to speak with us and other outlets last week ahead of the finale. And you’ll find some grief, because a great story has ended, leaving those who’ve loved it heartsick and satisfied all at once.

Still, there are upsides to saying goodbye to one of the greats, even if you were part of its greatness. “If I never wear another wig in my life,” Rhys told us, “it’ll be too soon.”

A FEW WORDS FROM MATTHEW RHYS AND KERI RUSSELL 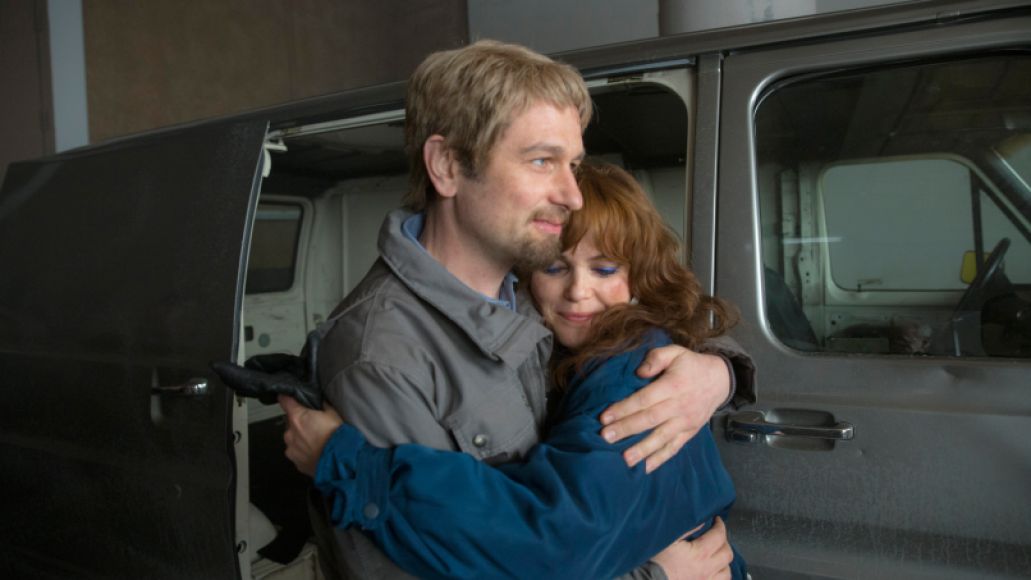 Matthew Rhys and Keri Russell in The Americans

Matthew Rhys on the suit from “The Summit” and capitalism in general.

It’s a real immigrant story, you know, and regardless of who they were, spies or whatever … they came to the US and they want to succeed.

Keri, on Elizabeth’s choice to let Jackson live and her humanity.

Well, first of all, that kid [Austin Abrams] … was so good. He’s so young, and was so good. I love that scene because there’s something so upsetting when — because up until this point, I think, Elizabeth is like, “Shut the fuck up, you had a great night of someone fucking you, like, deal with it, you’ll be fine,” you know. But then when he – the way he’s looking at me saying, “You’re scaring me, let me go.” I think he’s so horrified and afraid, and I think Elizabeth sees the monster that people have seen in her … I think it’s devastating. And everything is sort of unraveling.

I think the reason Elizabeth was such a good soldier was she was able to not see that. She was able to be the better soldier and not let things distract her. And I think her unraveling in this season, being so tired, and working on her own, not having anyone to help you, or support you, you start to make mistakes, and you start to slip up. And in her case, the mistakes are [the result of] becoming more human, right? Developing a conscience about things. Seeing the kid as she kills the parents, watching that video … that’s got to be a low moment in anybody’s life.

This pick could easily have gone to “The Great Patriotic War”, “The Summit”, “Jennings, Elizabeth”, or the season-opening “Dead Hand” (our pick for the best TV episode in March 2018). But there’s a higher degree of difficulty for season finales, to say nothing of series finales. This one is basically perfect.

When we talk about great TV endings from now on, expect to hear about “START” in the same breath as the finales of shows like M.A.S.H., Cheers, and Six Feet Under. And expect to read more about it below. 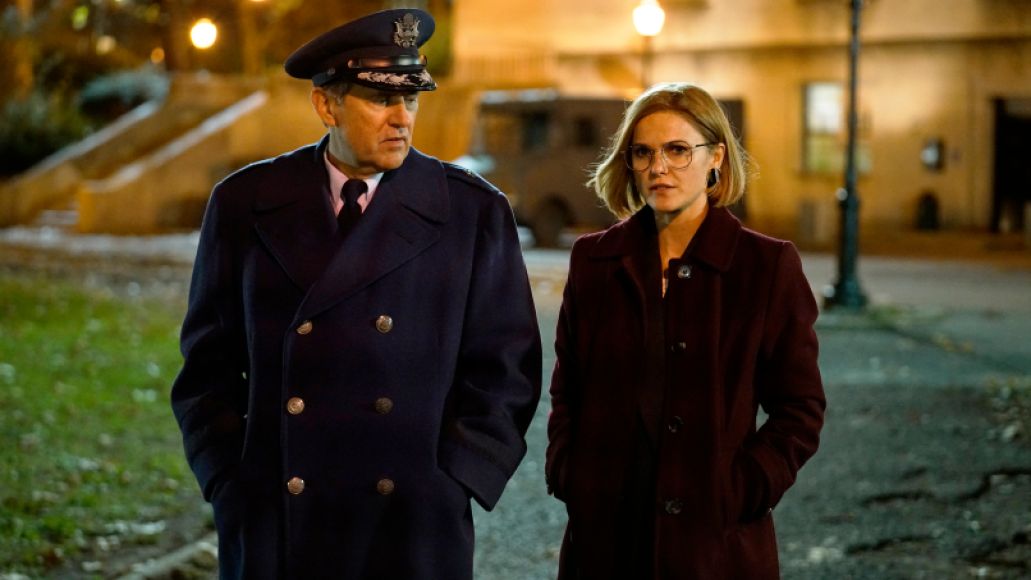 From FX’s The Americans

It says something about this remarkable final season that its weakest link ends with one of the best and most horrifying sequences in the series, as Paige runs up on to her brain-spattered mother, putting herself, her family, and the mission at risk and crystallizing the two over. “Tchaikovsky” is a terrific hour of television. Its only real failing is not being quite as good as the episodes that come before and after. Well, that, and perhaps a few Gennadi-related scenes that slightly outstay their welcome. 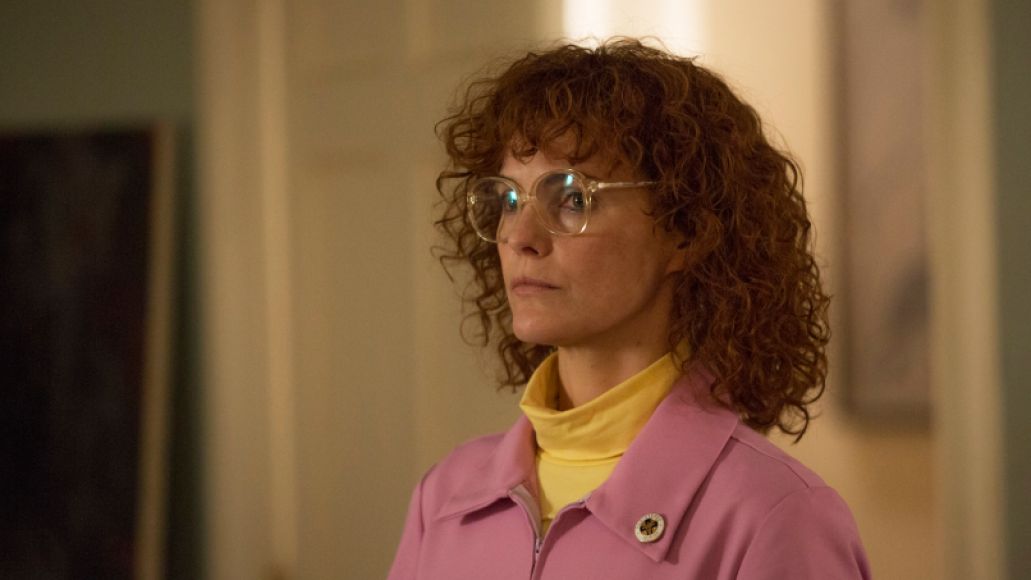 Keri Russell in The Americans

When we did this dance with Killing Eve, I cheated and picked both its leads. Were this a series-long MVP selection, I’d do the same, but as good as Matthew Rhys is in the final season of The Americans (and as good as Holly Taylor is and Noah Emmerich is), season six belongs to Elizabeth Jennings.

Russell has been extraordinary in this show from the very beginning — someone give her an Emmy, already — but I was particularly taken by her turn in “The Summit”, which may be Russell’s best episode overall. Watching the good soldier, the hardliner, the stone-cold-practical elite spy find her instincts turned toward mercy was a remarkable thing. In essence, she spent one season going through the arc Philip traced over several seasons, and his season five experience was all packed into “The Summit”. That alone would have solidified Russell’s performance as one for the ages.

But her hiccup of grief when she realizes she has to leave Henry? The look on her face when she sees Paige on that platform? Her final line, the show’s final line, delivered gently, in Russian?

It’s a knockout. Give her an Emmy. 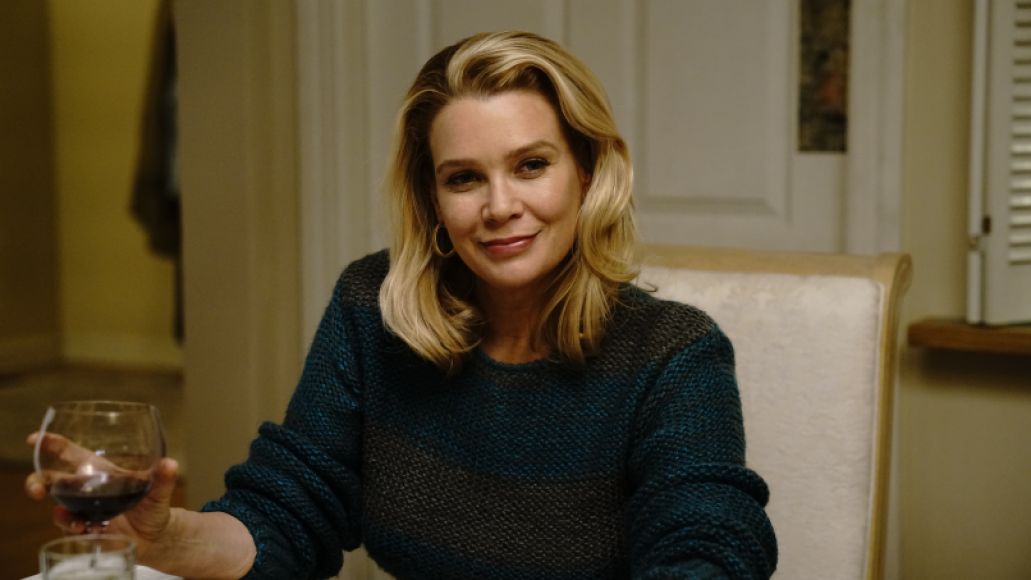 Laurie Holden in The Americans

As it turns out, it doesn’t really matter if Renee (Laurie Holden) is a secret Russian operative. In one of the cleverest tricks pulled by a clever show, the uncertainty surrounding her identity and intentions becomes a central part of the tragedy of The Americans. Philip tells Stan his suspicions, and it’s an act of friendship that’s simultaneously shattering and cruel. Stan is left not knowing who or how to trust anyone else ever again, and that would have been true even without the inescapable worry that the woman he loves is not who she says she is.

And because we don’t know either, it’s all the easier to empathize with Stan’s plight. Does he chase that rabbit down the hole, knowing what he finds may destroy what’s left of his life? If he chases it and finds nothing, won’t he already have done irreparable damage to his marriage? If he doesn’t, can he ever trust her? Even if he did search and find nothing, would that be enough to convince him that she’s just Renee, the lady from the gym? After all, he searched the Jennings’ garage way back in the pilot, found nothing, and was wrong.

It’s a brilliant move, made more potent by the last, lingering shot we get of Holden, staring across the street, unreadable.

In a show of great musical montages, they saved one of the very best for last — and by splitting it in two, they made it even better. I encourage you to check out Michael Roffman’s excellent piece on the show’s best musical moments. It’s a list, and it has a new No. 1. 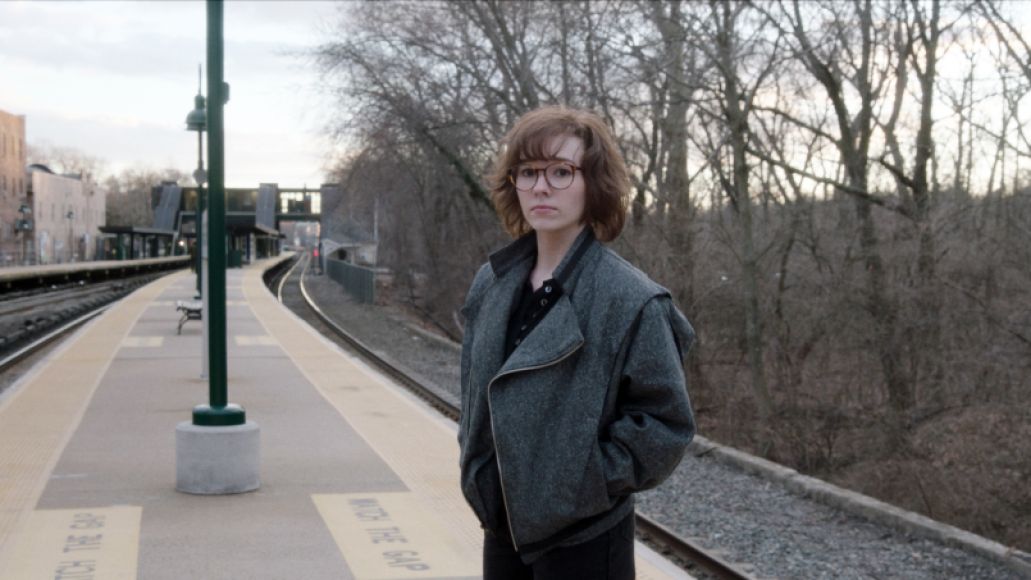 Holly Taylor in The Americans

When I saw Paige Jennings through that train window, I couldn’t breathe.

In its final hour (and change), The Americans gave us full-blown Russian tragedy, but with somehow less violence. Not a drop of blood was shed, except heart’s-blood. Not a blow was struck, except with honesty and absence. The ominous cyanide pill was dropped in the only grave we’ll ever see for the Jennings family, its lethal potential extinguished alongside the identities they carried for decades. The shootout so many dreaded for years was 12 minutes of conversation in a parking garage. The only big death was the death of a family.

Holly Taylor’s face peering through that window is an image that we’ll be seeing for years, every time this finale is discussed (and it will be discussed often). In it, you can see accusation, regret, longing, anger, and punishment. Like every scene in this finale, it’s many things at once. It’s not just a great episode and a great finale; it’s the best episode of a great season. I’m not sure I’ve got it in me to watch it again, but at the same time, I can’t wait to watch it again.

THE SIX BEST OF THE SERIES 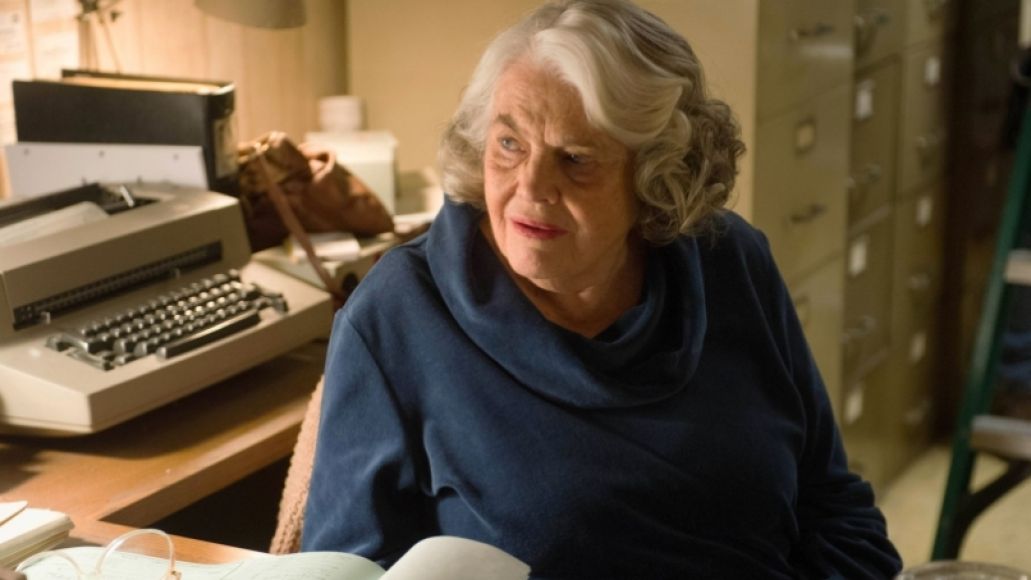 Lois Smith in The Americans 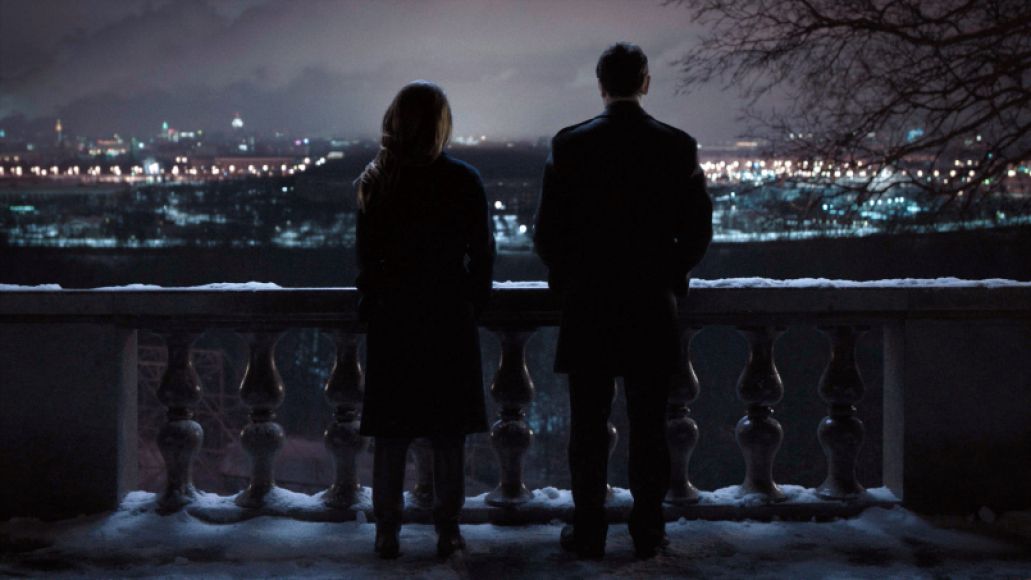 What can I say, comrades? A spy show that was always actually a family drama is over. We’ll have much more to say about The Americans in the weeks, months, and years to come — we’ll be talking about it on TV Party next week, but there’s more to come beyond that — but for now, let’s state facts.

The Americans gave us six seasons of television that was good at worst and all-time great at best.

The Americans gave us two leading performances of incalculable depth and a woman who was more than a wife, mistress, or adversary.

The Americans gave us some of the best damn montages we’ll ever see.

The Americans gave us Mail Robot.

The Americans is done now. I miss it already.

TV Review: The Americans Takes Its Final Bow with a Near-Perfect Season