Top Episodes is a recurring feature in which we handpick the definitive best episodes of a groundbreaking, beloved, or otherwise awesome television series. This time we revisit Lawndale and the sick, sad world of Daria Morgendorffer.

If all was right in the world and as it should be, animator and satirist Mike Judge would be a household name. Since the mid-’90s, Judge has pointed a high-resolution lens — both scathing and sympathetic — at many of the institutions and absurdities firmly embedded in American culture. He’s made us laugh, cry, and reconsider through unlikely characters like Beavis and Butt-Head, Hank Hill, cubicled caricatures like Milton and Bill Lumbergh, and even President Camacho, who, compared to the current inhabitant of the Oval Office, seems like a tactful and seasoned diplomat. And out on the peripheries of Judge’s universe frowns Daria Morgendorffer — outfitted in her staple green jacket, black army boots, and thick-rimmed glasses — watching the latest episode of Sick, Sad World in her padded bedroom, armed with an acerbic wit and monotone tongue capable of annihilating any dumb jock, shallow fashionista, or hypocritical adult who crosses her well-insulated path. She’s hardly traditional leading-lady material, but on lease from Beavis and Butt-Head’s Highland stomping grounds, creators Glenn Eichler and Susie Lewis turned the character into the reluctant star of the 1990’s sharpest commentary on suburban American teenage life. 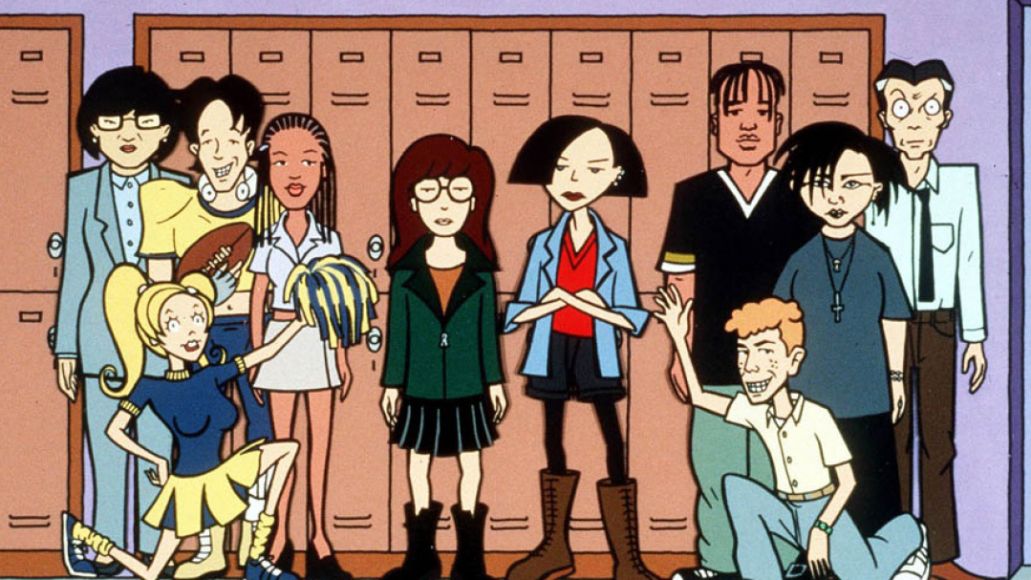 Daria’s superior intelligence is both her super power and her kryptonite, a trait that makes her an outcast in any social situation. At school, she tolerates dunderheaded athletes and bimbo cheerleaders; daydreams through classes taught by bleeding hearts, rage-aholics, and man-haters; and acts as a one-person watchdog organization dedicated to keeping Lawndale High’s crooked administration honest. Her lasagna-stuffed home life offers no respite or reason to curb her cynicism. Her father, Jake, a quick-tempered, dim-witted man-child, and mother, Helen, a career woman torn between home and the office, are both well-meaning but oblivious about how to connect with their eldest daughter, and cute and superficial sister Quinn, Daria’s opposite in every conceivable way, leaves you certain that someone had to be adopted. Fellow outcast Jane Lane serves as Daria’s lone life raft in Lawndale, the one person around whom she can power down her bullshit and hypocrisy detectors and recharge for a bit. 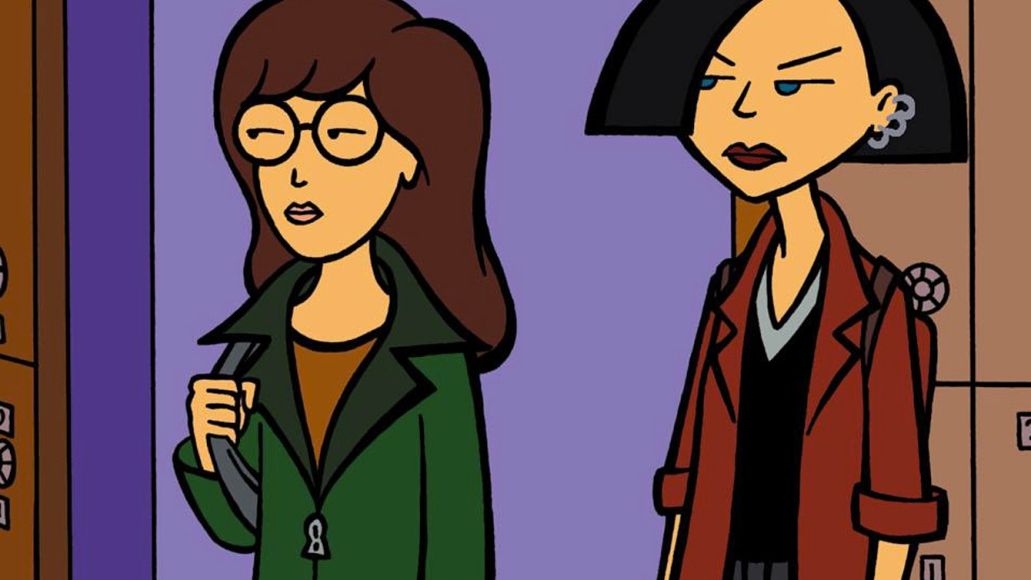 It’s not an original premise by any means. Television shows long ago started dropping sane people into loony bins of all shapes and sizes to watch the comedy unfold. However, if Daria had merely been a weekly 20-minute cartoon about a smart-ass bookworm with a sarcastic put-down for every fool she meets, we wouldn’t still be talking about the show today. As much as Daria has the world figured out and sees all the angles, she suffers from the same problem that teens of all intelligences face: figuring out where she fits into the whole mess. All the wit and brain cells in the world can’t simplify the basic need to be accepted, the dilemmas that come with being a good friend, or the wanton desires of the teenage heart. As much fun as the antics, barbs, and Mystik Spiral (they’re still thinking of changing the name) songwriting sessions still are, Daria remains indelible due to the honesty with which its creators, writers, and actors treated the teenage experience. As long as being a teen remains a gut-wrenching tragicomic experience, Daria will remain a character who resonates with anyone who marches through adolescence, whether it be in army boots, football cleats, or like totally cute pumps.

Now, excuse me. You’re standing on my neck. 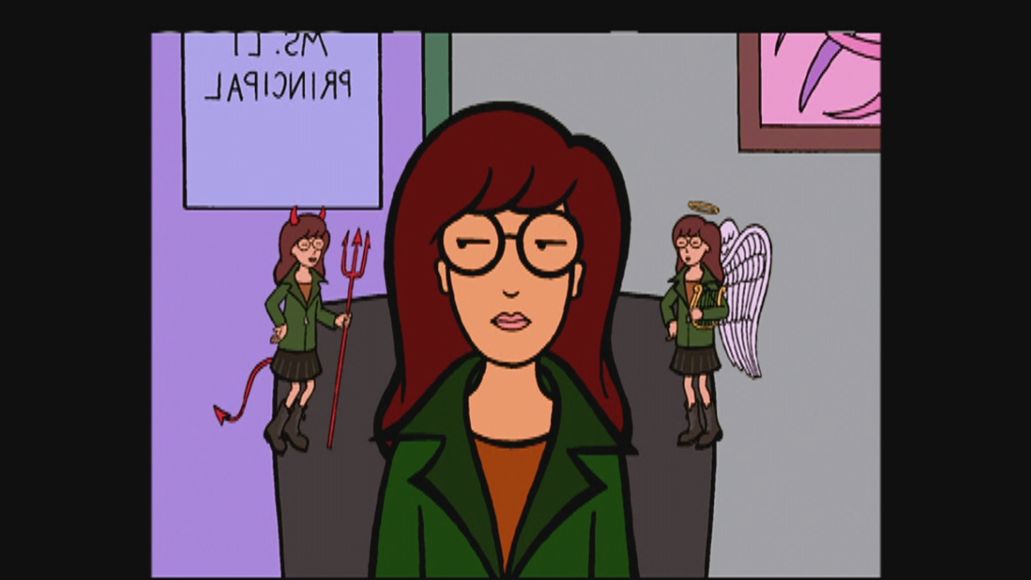 One of the more gradual changes over the course of the series traces Daria’s kid sister, Quinn, maturing and beginning to understand that there’s more to life than the mall, boys, and being cute. When Principal Li offers the Lawndale High faculty a new coffeemaker in lieu of a pay raise, Daria finds herself crossing picket lines and filling in as Quinn’s English teacher. At the fashion club’s behest, Quinn implores Daria to make their Romeo and Juliet test a cakewalk through fair Verona, but she refuses. “Why should you go out of your way to protect the stupid?” Daria asks. “You’re not one of them.” It’s the kind of tough-love nudge that Quinn occasionally needed throughout the series as she struggles to reconcile her desire to be popular with the nagging feeling that the vapid ditzes she calls friends are only dragging her down. When Quinn sees her studying pay off on the exam — unlike Sandi, Stacy, and Tiffany, who wrote about Leonardo DiCaprio instead of Romeo — she defends her sister against their criticism. That’s right, her sister, not her cousin or some girl who always happens to be around. For the first time in five seasons, “only child” Quinn publicly owns up to Daria being her big sister, regardless of how it affects her popularity. It may seem like a minor concession, but the moment couldn’t be any more satisfying, not even if Quinn got up on her desk and declared, “Oh, captain, my captain” as Daria exited the classroom.

Excuse Me, Excuse Me: “We think he’s [Kevin] doing very well … considering he missed out on evolution.” 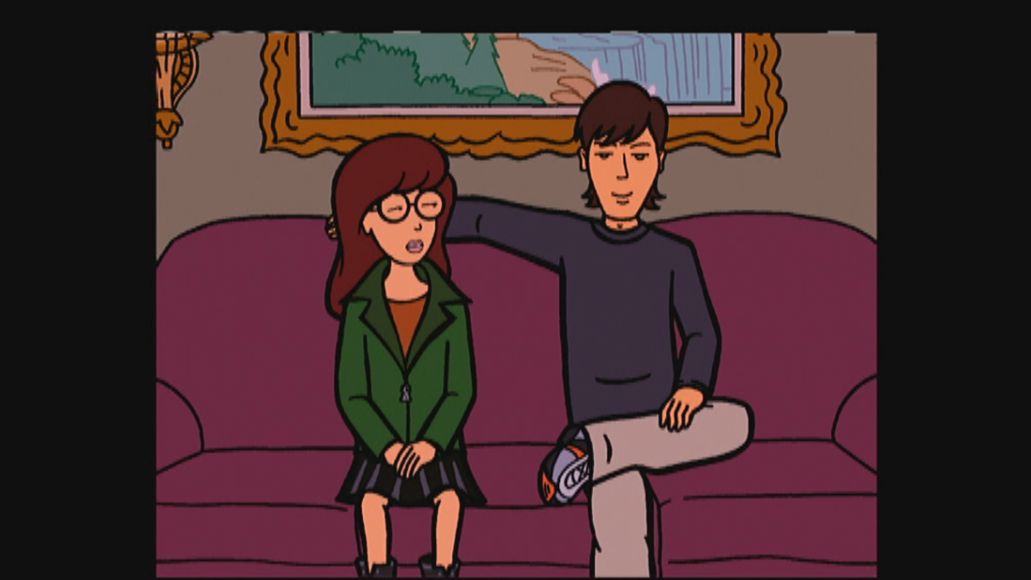 Sick, Sad World: “Can anger management training really help guerrillas avoid extinction? Maybe, but it’s not doing much for the psychiatrist. The Apes of Wrath today on Sick, Sad World.”

There’s often a discord between what the heart wants and what it can actually handle. From the earliest episodes of the series, we’ve seen that Daria isn’t immune to crushes. After all, she spent three seasons unable to be around Jane’s older brother, Trent, without a blush blemishing her jail pale. However, Tom is actually her boyfriend, not just a crush but someone with whom she must work to maintain a relationship. When he innocently falls asleep on her bed and accidentally spends the night, it’s not only that the school-wide rumors that Quinn begins infuriate her big sister. Just as much distress arises from Daria’s fear that a healthy relationship needs to involve sex to progress. She worries that her reticence about sex could be stifling a relationship she greatly cares about. The question, of course, becomes whether or not she’s ready for that step. It’s such a gigantic leap at any age, especially as a teen, to go from being comfortable in one’s own skin to being physically intimate with another person. Everyone has to cross that awkward bridge at some point. It’s just one more instance of this MTV cartoon not being afraid to be brutally honest about the dilemmas young people face — in many ways, it’s much more candid than the live-action shows of the time aimed at teens.

Excuse Me, Excuse Me: “My hormones don’t rage. Oh, sure, they get mad sometimes, but then they just stop speaking to each other.”

Sick, Sad World: “This is just astounding. Here you are — blind, deaf, and barely able to walk — yet you conducted simultaneous affairs with three members of the royal family.”

On her first day at Lawndale High, Quinn becomes VP of the fashion club, gets asked to join the pep squad, and has the entire male student body trying to date her. Dara (it’s Daria!), on the other hand, finds herself enrolled in a crash course in self-esteem taught by Mr. O’Neill, an English teacher who believes there’s nothing a hug and a good, long cry can’t solve. Daria can’t resist the urge to use the pseudo-diagnosis to prank her parents (Pizza Forest, anyone?) and embarrass Quinn (IDing her as her kid sister at a school-wide assembly), but all fun aside, the debut episode makes it clear that the clean slate that normally comes with a move has already begun to brim over for Daria in Lawndale. She will be an outsider, both at home and at school, and nobody, neither parents nor teachers, seems to have the first clue about how to make sense of her bookish, sarcastic personality. The lone benefit of being dumped into the remedial esteem course comes when Daria meets artsy Jane Lane, a six-time self-esteem class lifer. “I like having low self-esteem,” Jane explains to Daria. “Makes me feel special.” It’s the humble beginnings of one of the great animated friendships of our time. Lucy and Ethel, Thelma and Louise, Daria and Jane.

Excuse Me, Excuse Me: “Don’t worry. I don’t have low self-esteem. It’s a mistake. I have low esteem for everyone else.” 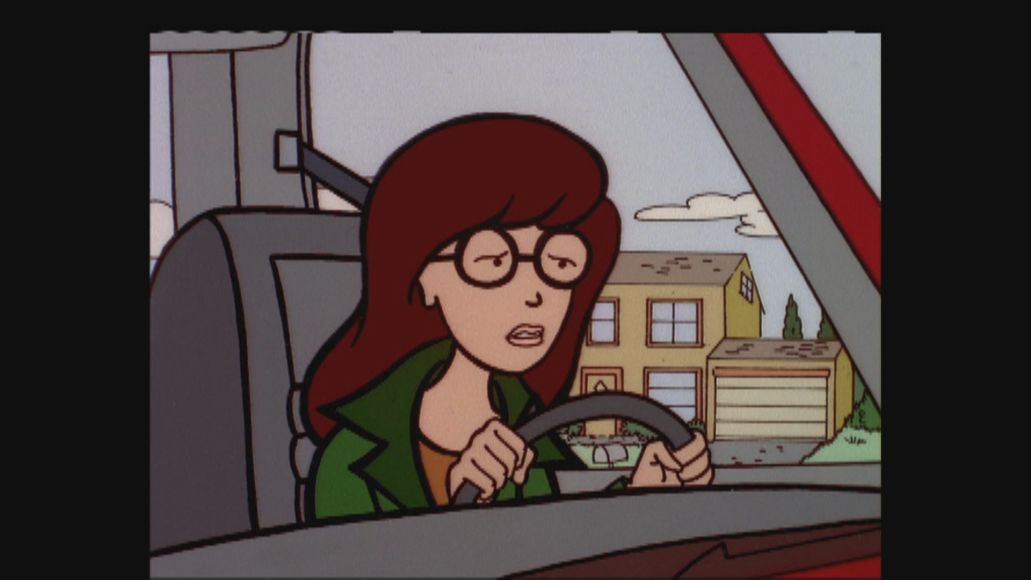 Sick, Sad World: “When he turned up his nose at accordion lessons, they cut off his inheritance molto allegro. The severed pianist, next on Sick, Sad World.”

Daria’s green jacket isn’t the only armor she sports. She also trudges through the trenches of Lawndale High with a sturdy sense of self, a set of uncompromising personal convictions, and a general lack of concern for how others view her. But that doesn’t mean she’s not susceptible to the same hangups all teenagers face. At first, her itching contact lenses are intended to save the lives of neighborhood canines as she negotiates the perils of the open road on her learner’s permit. But she soon discovers that part of her likes how she looks without her clunky specs and doesn’t totally abhor the compliments she’s receiving, especially a drive-by thumbs up from Trent. But does this touch of vanity make Daria a hypocrite? No, just human. But it takes the unlikely girl’s bathroom trilateral of Jane, Jodie, and, eeep, Brittany to convince her that she’s perfectly normal. “For god’s sake, Daria. Who told you you have to be a martyr for principle?” asks Jane through a stall door. “You’re a teenage girl, not Nelson Mandela.” Ultimately, Daria determines that eyewear doesn’t change the person she is on the inside, and she also recognizes the problems that come with being your own worst critic.

Excuse Me, Excuse Me: “Your personal space is the final frontier, Upchuck. One where I intend to never boldly go.” 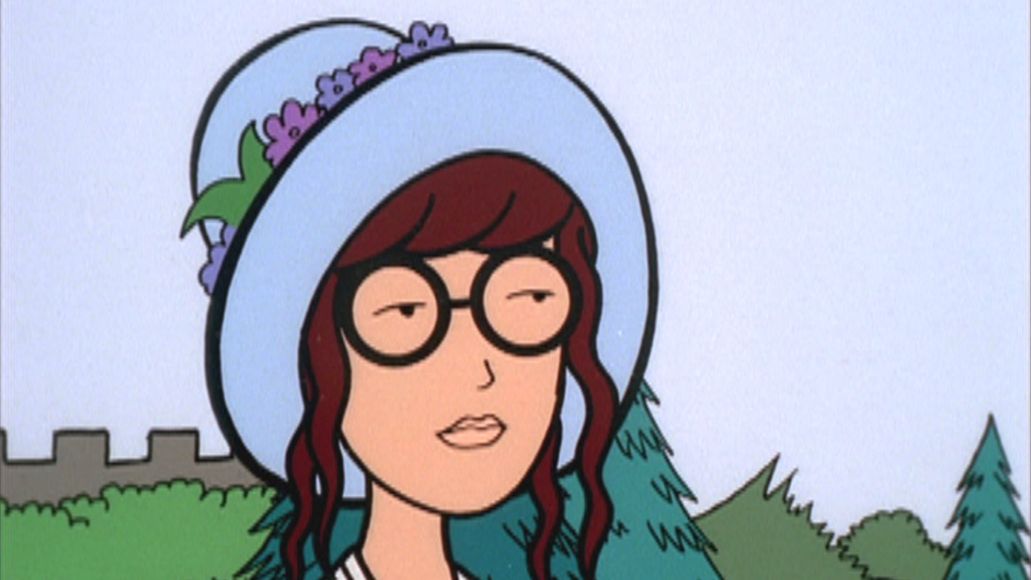 A special assignment for Mr. O’Neill’s English class tears Daria away from her preferred revenge fantasies in order to write a short story about people she knows. She wants to write something meaningful, “something about something that says something,” she explains, but that proves harder than expected. She inserts her family and friends into parodies of everything from The Graduate to Jane Austen, but nothing feels true. The writer’s block doesn’t lift until her workaholic mother, Helen, who demonstrated little understanding of her daughter’s feelings when Daria came to her for help earlier, encourages her to check her razor-sharp cynicism and be honest about what she hopes will happen one day. The result is a simple family kitchen scene in the future, one where Jake and Helen are retired, Daria is married and a successful columnist, and Quinn lovingly transports around a gaggle of grandkids. The once dysfunctional family sits down together, drinks coffee, and enjoys each other’s company over a game of hearts. In Daria’s tale, everything somehow works out for the Morgendorffers. It’s not so much the story’s happy ending that leaves Helen in tears; it’s that the future that Daria wants for herself includes her family, the people she often struggles the most to relate to. It’s one of the more touching moments of the series.

Excuse Me, Excuse Me: “This is an extra assignment just for me, a punishment for being smart.”