Beyond the Gates: 365 days a year, Randall’s Island and its conjoined Ward’s Island provide essential services to the people of New York City. Located in the East River and adjacent to three out of the five boroughs, it shelters homeless families at HELP USA Keener and offers rehabilitation services to addicts at Odyssey House. For athletes and recreational sports types alike, it serves as a place to train and play, with the Olympic-regulation tracks and massive soccer fields. Since 2012, Randall’s has been the site of Governors Ball, one of east coast’s biggest music festivals. For those who’d rather not trek out to the desert for Coachella, it’s a solid alternative. –Gary Suarez 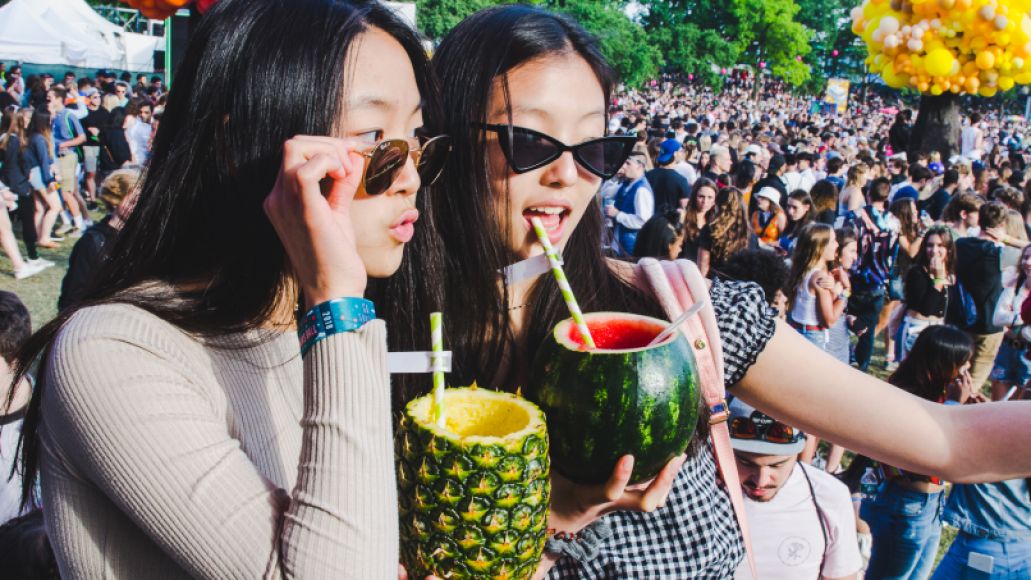 Best Bites: Keenly aware of location, Governors Ball deserves credit for looking to local eateries to populate the booths across the fairgrounds. With Queens just on the other side of the RFK Bridge, representation by the boro’s businesses like Gordo’s Cantina and Salt & Bone was welcome. Though teenage tastes meant long lines for novelty-sized cheese stickery, Big Mozz and rapper Nas’ comfort food chain Sweet Chick, as well as for generic pizza slices for seven bucks, Fedoroff’s Steaks in one of the 21+ only zones offered the best bite: a simple, satisfying, and definitely filling Philly sandwich. –Gary Suarez 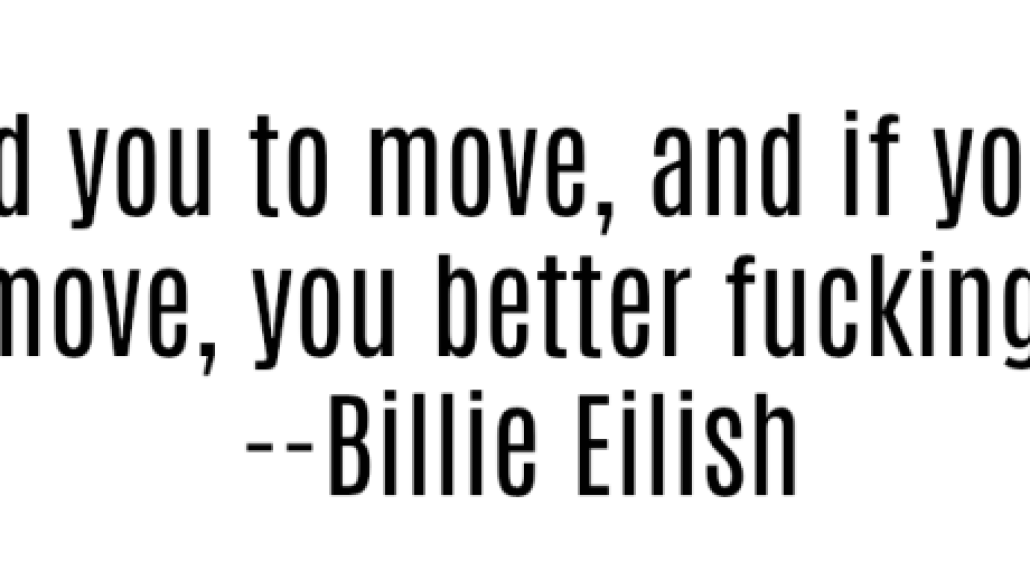 Festival Fashionista: Considering the makeup of the young crowd and (mostly) sunny weather, it shouldn’t be too surprising that the festival attire of choice was high-waisted, low-rise denim shorts and teeny-tiny, lacy tanks. But if you wanted to stay cool, sexy, and chic, you really wanted to look like Kelela. “Underboob” was clearly the word of the day with her draped and knotted (I guess we’ll call it) dress, but it was sex appeal with utter elegance. Watching Kelela perform her smooth, electronic take on R&B as she gracefully swayed across the stage was like a relaxing breeze under the trapped heat of the American Eagle Stage tent. (And extra shout-outs to Kelela for being a queen and letting photographers stay in the photo pit as long as they wanted to capture all her beauty.) –Ben Kaye 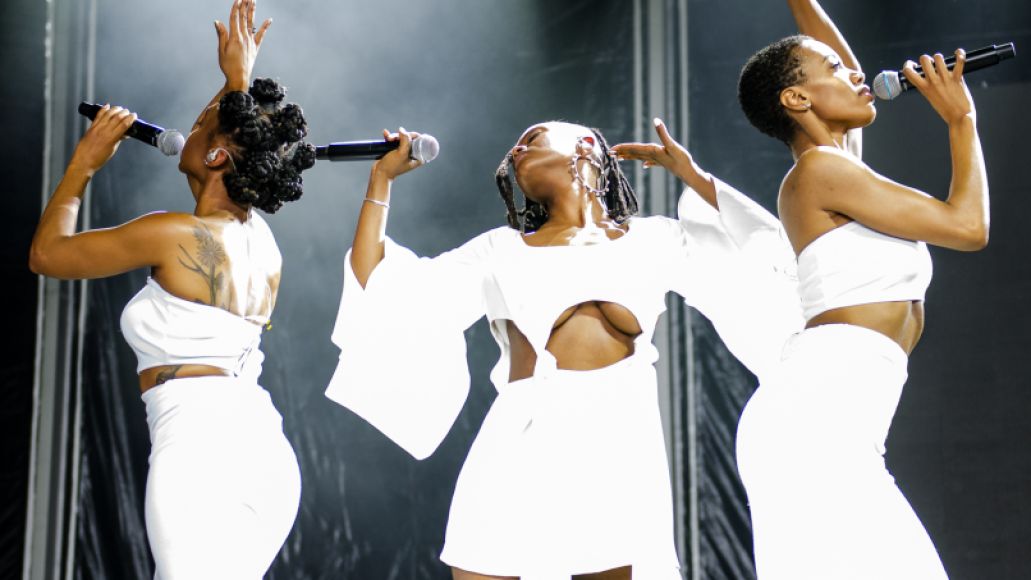 Most Educational: While Damian Marley may be best known for hip-hop crossover fare like “Welcome to Jamrock” and his duets LP with Nas, the roots reggae royal fully embraced his legacy during his jammy set. While joints and weed vapes were staples of the weekend, despite the assuredly thorough efforts of festival security at the gates, he offered up a lesson in the magical and medicinal powers of the herb. Citing research into its positive effects in treating cancer and multiple sclerosis, Jr. Gong led his band through Stony Hill highlight “Medication”, doing a better job than any NORML pamphlet would. –Gary Suarez 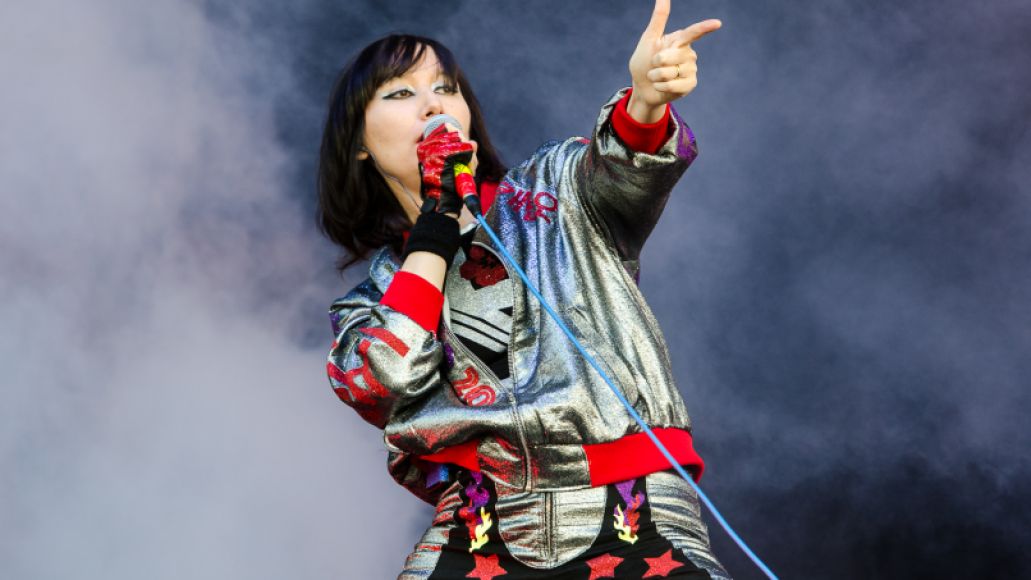 Chained to the Rhythm: Though they weren’t quite the beautiful restrained choreography of Kelela’s performance, Karen O.’s moves for the Yeah Yeah Yeahs show matched the high levels of excitement of those in attendance. As the band stormed through big numbers like “Heads Will Roll” and “Maps”, she exploded with pure unbridled energy, reminding everyone why they fell in love with the artsy Brooklyn dance punks in the first place. –Gary Suarez 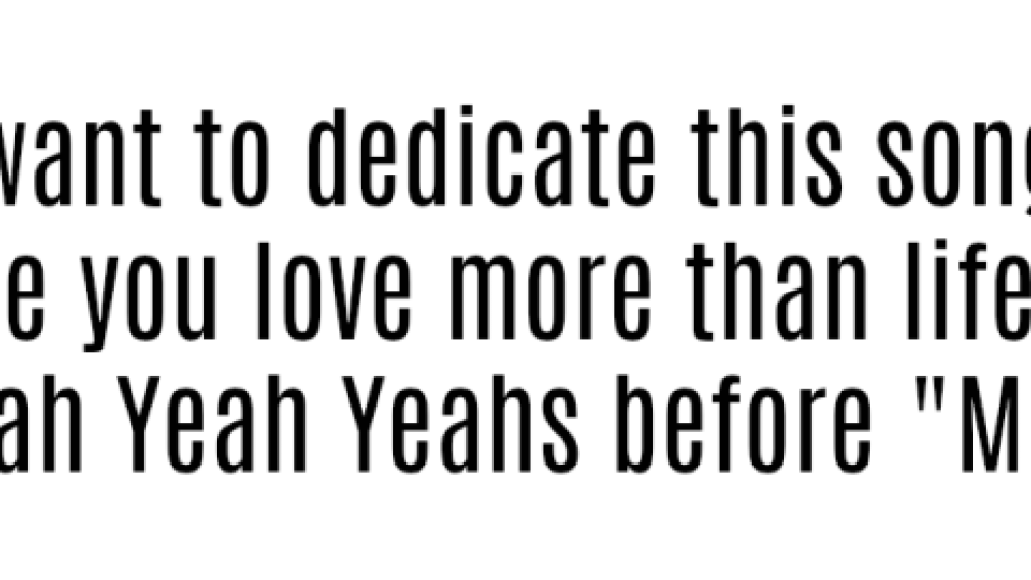 That One Performance: Best known for not dropping an album, Jay Electronica rode into Randall’s Island on his reputation as an emcee. Roc Nation’s least commercial prospect, the cosmic-brained rapper nonetheless amassed a sizeable audience despite his less than ideal mid-afternoon slot. Perhaps some were hoping for a Jay Z cameo, which Elec teased, or for information about that elusive full-length. Though neither came about, he more than made up for it with a wild and solid set that found him largely down in the audience communing rather than above it preaching. It certainly didn’t hurt that he goaded people to jump the barricades and take to the stage, which they did en masse and to the chagrin of security. –Gary Suarez 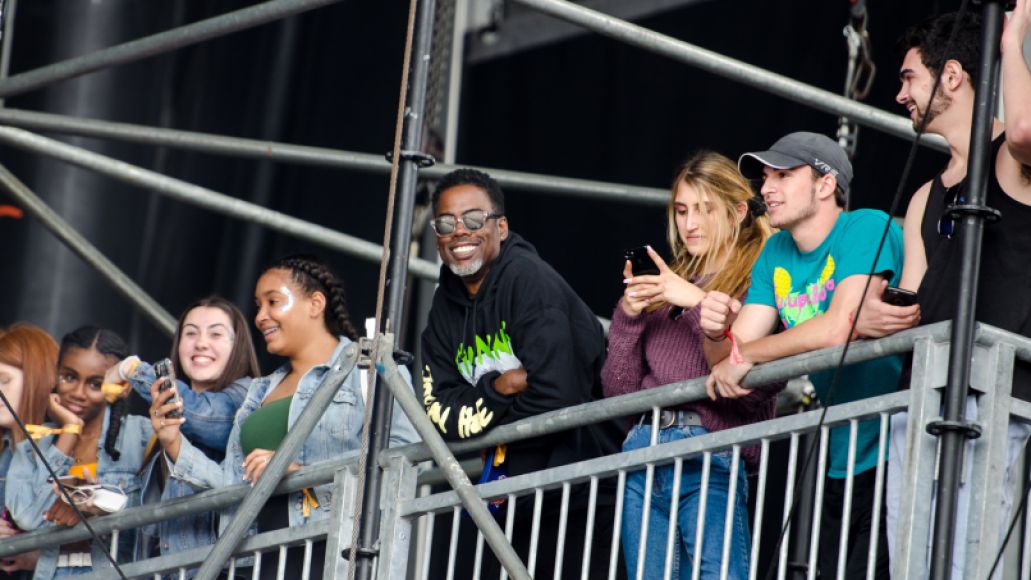 Least Visible: The programming geniuses behind Governors Ball probably wish they had a mulligan on their decision to put Lil Uzi Vert on the smallest stage they had. Surely, they should have anticipated that the covered American Eagle tent would be the least suitable zone for his amassed fans to enjoy his set. Nearly a half-hour before showtime, with N.E.R.D. clanging away on the opposite side of the field, concertgoers had more than filled the space. By the time Uzi actually took the stage, he was practically invisible and scarcely audible. –Gary Suarez 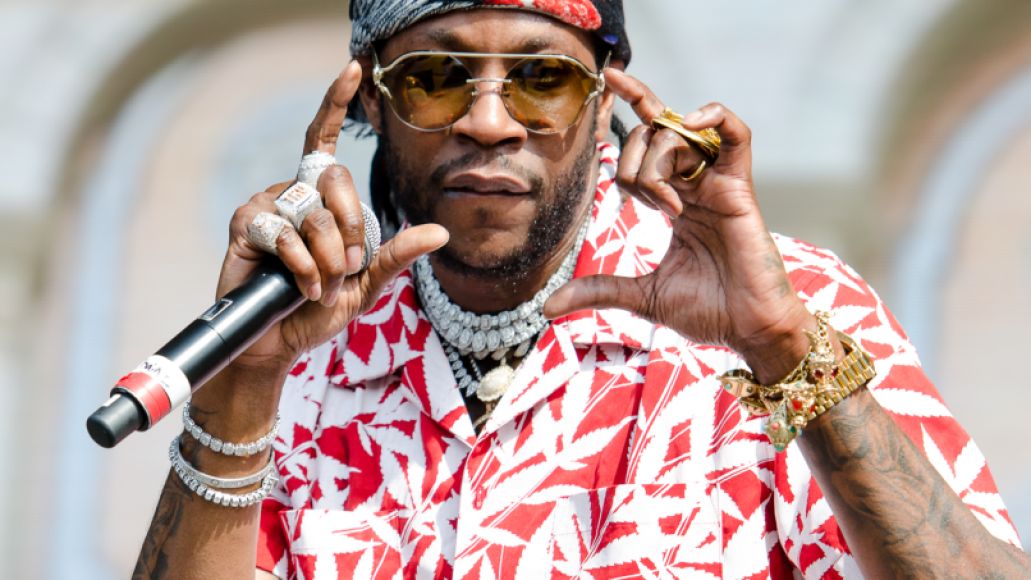 Don’t Believe the Hype: Nobody wants to have a sober epiphany at a three-day music festival, but sadly mine came during 2 Chainz’s downright rote revue. The man has more than his share of hits, which unspooled as a virtual medley over the course of his set. Yet while the crowd yelped and sang along, a keen observer would have noticed that the most memorable parts of the bulk of these songs are the ones where someone else has the mic. That cruel revelation proved especially clear every time Tity Boi’s DJ cued up or abruptly ended a track, a reality heightened by the artist’s lack of surprise guests. –Gary Suarez 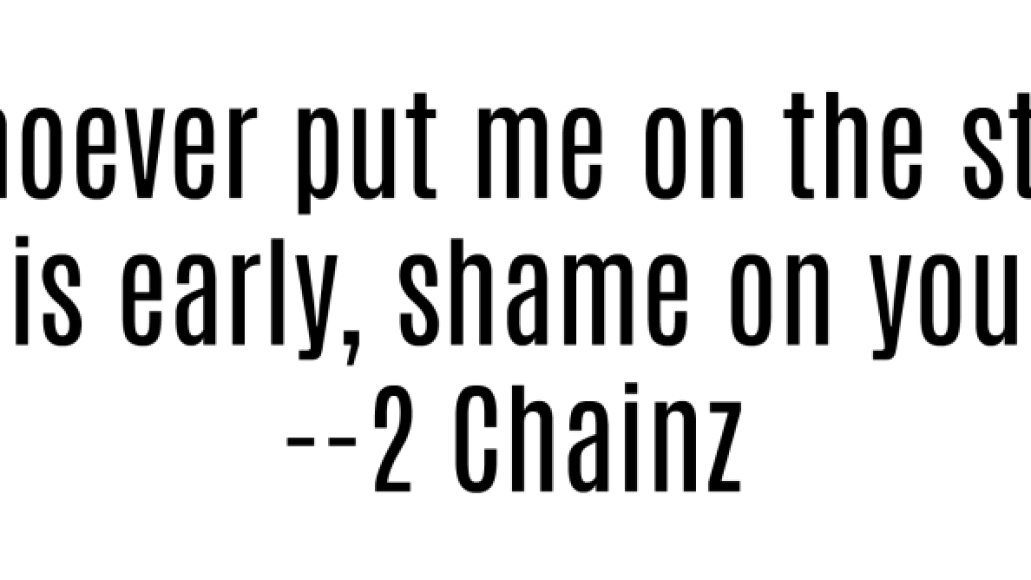 The Best of the Tiny Fonts: There’s a clear exposure benefit at a festival like this for lesser known artists, with no more than two simultaneous performances for attendees to choose between. With all four stages easily accessible on the festival grounds, the opportunities for music discovery abound. While not altogether unknown thanks to her part in Daniel Caesar’s minor hit “Get You”, Colombian-American singer Kali Uchis properly introduced herself to many new fans at Governors Ball. Versatile and authentic, she exuded a carefree star power throughout her performance, bringing soul and class in equal measure while eliciting shrieks from those already in the know. –Gary Suarez 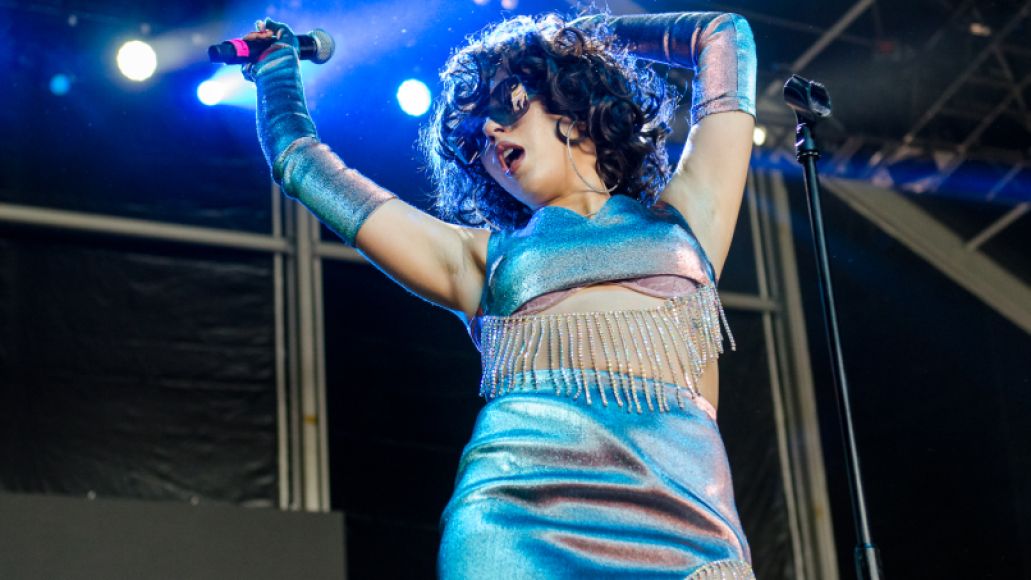 Why Can’t We Be Friends: Yeah, so Eminem brought out 50 Cent, Royce Da 5’9′, and Phresher during his festival-closing set on Sunday, but come on, you see Em at a fest and you pretty much expect 50 to pop up at some point. A great guest spot is really either about a) complete and utter surprise (of which there were really none this year) or b) looking at the lineup and going, “Well, those two artists have a song together… I wonder…” Billie Eilish was already bringing one of the most hyped sets of the weekend when she welcomed out “the most talented man I know,” Khalid for their collaborative “lovely”. Khalid would get to showcase his good vibes on the main stage later in the day, but the sparse and gorgeous “lovely” let the pure vocals of both artists shine. It’s not a hard-hitting kind of collab where the other guy is gonna come bounding out and get the crowd jumping, but it was perhaps even more powerful just watching the two face each other and straight belt as the 13 Reasons Why OST track hit that crescendo. –Ben Kaye 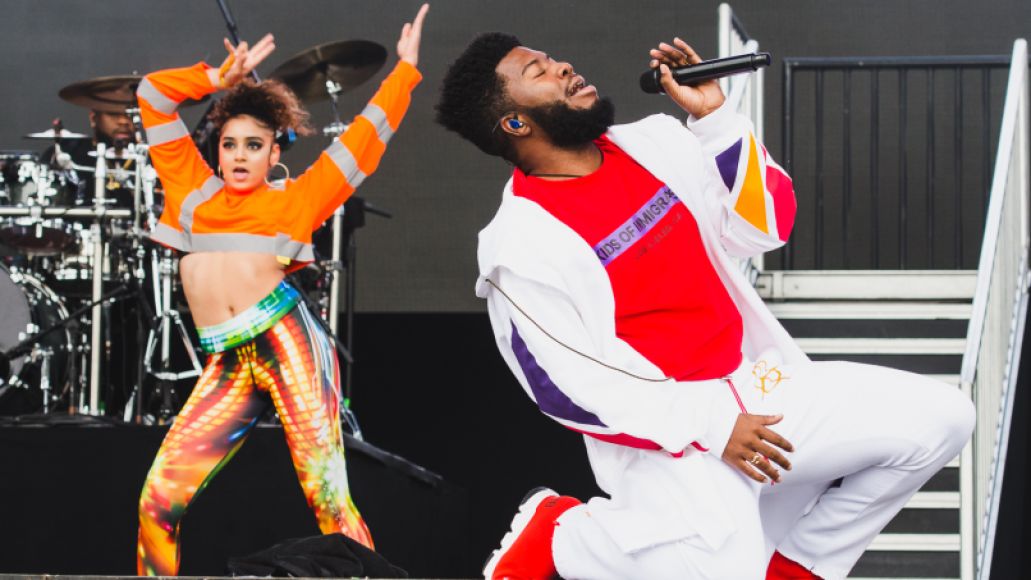 Most Redundant: You’d think that, as perhaps the biggest American hip-hop artist of 2018, Post Malone might have figured out how to comport himself live. Despite playing to massive audiences across the country, the pop-trap crooner doesn’t seem to have picked up any professional tricks along the way. Though he delivered every single the screaming masses desired, Malone proved robotically formulaic in the presentation. Before each song, he let everyone know what the song was about using the following template: This song is about [insert word or phrase]. Tiresome as that may be, the worst part is that they’re all apparently about nothing. –Gary Suarez 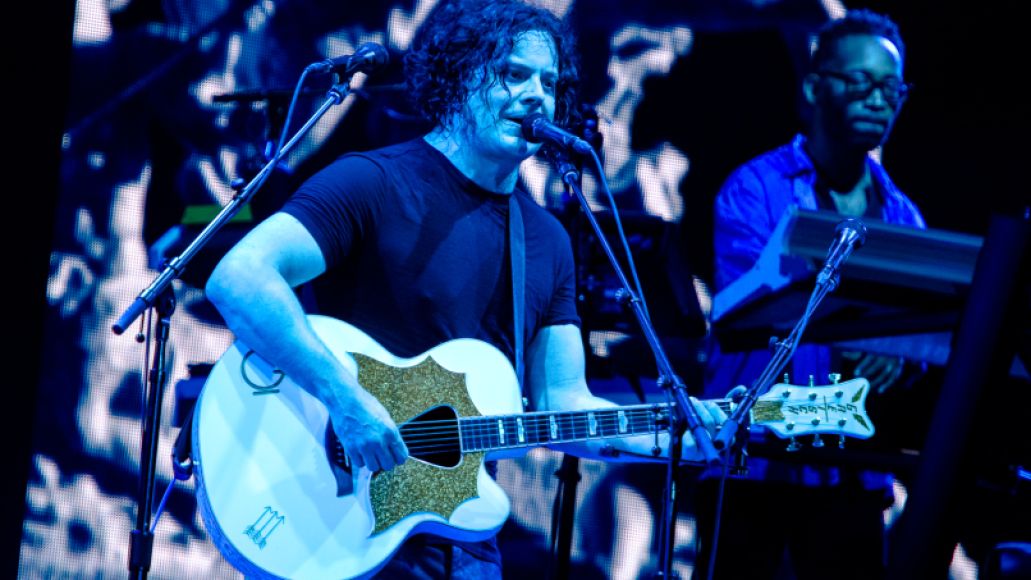 Phones Up: A glaring outlier in a lineup stuffed with hip-hop acts, indie rockers, and electronic dance duos, Third Eye Blind didn’t seem to belong. A legacy act whose biggest hits preceded the births of a plurality of attendees, the odds seemed stacked against them as they took to the Honda Stage Sunday while Khalid played the main Governors Ball one. But you’d better believe the cellphones were out and recording video every time the tight band ran through any one of their selected alt-rock classics, including devastatingly potent renditions of “Graduate” and “Jumper.” –Gary Suarez 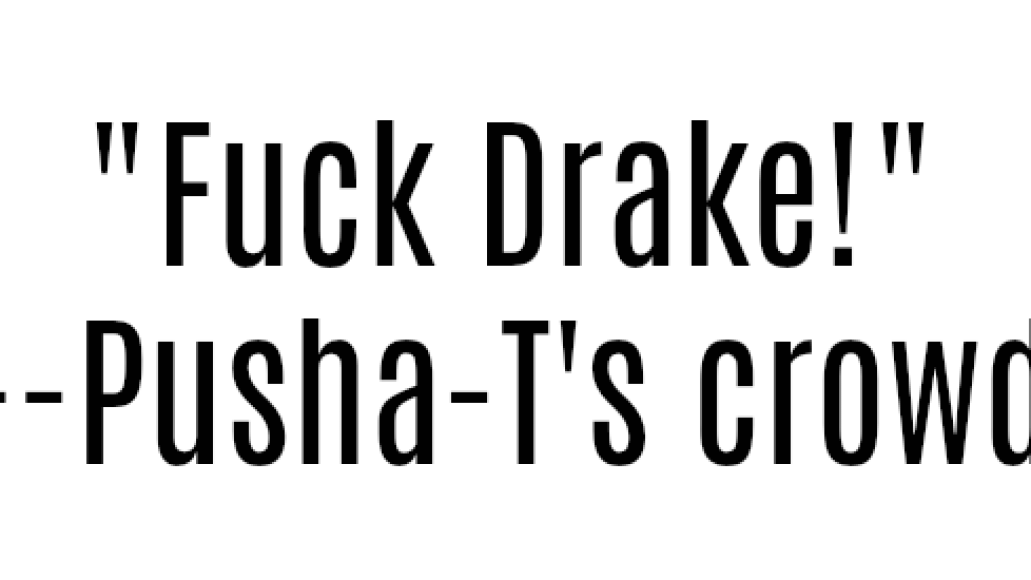 Quoteworthy/Overheard: “Fuck Drake!” That phrase must’ve seemed exhausting and cheap to the wordsmith Pusha-T as he looked out upon the audience chanting them repeatedly with gusto. Surely, they had come to see him for something more than gossip or the continuation of a rap beef he appeared to have already won days before with “The Story of Adidon”. A class act, King Push didn’t indulge anyone but himself, performing the entirety of the barely week-old DAYTONA as part of a 45-minute set of cocaine poetics. When he did get around to playing “Infrared”, which features the album’s most pointed bars, he innocently shrugged and smiled. –Gary Suarez 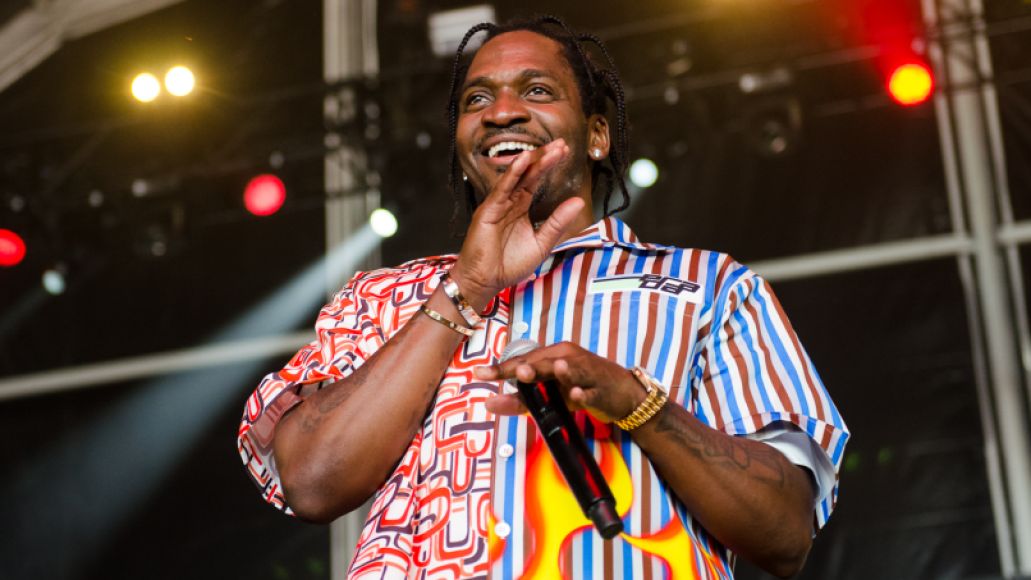 Coming Home: With main stage headliners Eminem, Travis Scott, and Jack White proffering memorable sets, Governors Ball continues to do what it promises, namely to deliver top talent technically within the city limits. For those new to the concertgoing experience or otherwise enamored with American festival culture, it hits all the items on the proverbial checklist for a relatively reasonable fee. More seasoned music lovers or people who’ve ridden this ride one too many times might reasonably find themselves fatigued by it all, particularly when waiting in an interminable and unruly queue just to refill a water bottle. Slogging between Bacardi Bay, the Kleenex Cabana, and LaCroix’s Fizz Lounge, the cost of entertainment seems higher than the ticket price or that second Coolhaus ice cream sandwich. At least it didn’t rain much. –Gary Suarez