Track by Track is a recurring new music feature giving an artists the opportunity to divulge the stories behind each track on their latest effort.

In director Brett Haley’s latest film, Hearts Beat Loud, Nick Offerman and Kiersey Clemons play a Brooklyn father and daughter who form an unlikely band. But as talented as the cast is, their real-life sgonwriting talents are best summed up by the fictional group’s name: We’re Not a Band. So when it came time to create the actual music for the feature, Haley turned to his frequent composer collaborator and Wild Cub member Keegan DeWitt (I’ll See You in My Dreams, The Hero).

DeWitt was tasked not only with creating the score for Hearts Beat Loud, but the songs that would make We’re Not a Band internet famous. The title of the movie actually comes from the first song Offerman’s Frank and Clemons’ Sam write together, and DeWitt provided them with plenty more indie jams to play throughout the film. Making things even more interesting and challenging, he also had to figure out a way to score a feature already entirely filled with music. How does one create compositions that capture the thematic weight of the independence and love at the core of a story while fitting in with the songwriting style designed for the family going through those emotions?

With both the Hearts Beat Loud OST and film coming out June 8th, you can get an early listen to DeWitt’s multifaceted work by streaming the album below.

For more on how DeWitt put together this wonderful soundtrack and score, hes broken down the entire thing Track by Track.

“Hearts Beat Loud”:
This track started it all. Brett heard it and instantly started to talk about the film. Even from the very raw stages, he was talking about this song and how it was a seed for these ideas that him and Marc were tossing around. We were just beginning “The Hero” together and Brett started to bring up the idea in a very abstract loose way. I kinda said “sure sounds great” thinking that it was just an idea. Cut to Sundance, the day after our premiere for “The Hero” and he turns to me saying “now it’s time for ‘Hearts Beat Loud’!” haha. Then I knew he was serious and I was gonna be writing some more songs.

We wanted to make it a song that felt very believable, both in how it’s recorded and how it’s written, as a song composed by two relatively inexperienced but talented people. It’s got no legit chorus, and instead it’s bread and butter is just the feel, the energy. It’s more about a big build and this driving drum beat. When I was first writing songs, I wrote a ton much like this in that they were more about capturing a FEELING and less about some anthemic chorus. The anthem was that intangible feeling you get in your stomach, and I think we are striving for that here.

From the very beginning, we talked about wanting the music to sound good and professional, but not like a top 40 record. I feel very passionately that the limitations that newer artists have in the recording process play a vital role in how candid and passionate the recordings themselves feel. I wanted to make sure to capture that with this version.

“Blink (One Million Miles)”:
This piano loop is a voice memo from my iphone which I had built in a moment of writer’s block in the studio. I had given up on writing anything and just started layering 3 different piano parts in a way that felt tender and sad to me. Months later, when I was writing for HBL, and in another moment of writer’s block, I recorded a rough vocal and baseline. I put it deep in a folder and didn’t think to send it to Brett. Finally, after about a month of struggling with ideas, I sent a random folder to Brett with a message along the lines of “none of this is very good but maybe you’ll find something worth discussing in here”. He called an hour later and was like “BLINK IS THE TRACK!”

The first lyric I wrote for the track was “you told me I was brave and I’ll remember that”. I wasn’t really sure what it meant at the time, but something about the bass changes and the words felt deeply touching. Big credit goes to Brett and his co-writer Marc Basch for aligning that with Kiersey and Sasha’s goodbye.

“Everything Must Go”:
I wrote this track alongside my bandmate in Wild Cub, Jeremy Bullock, who is massively talented. I had this sorta tropical steel drum loop (similar to Blink) that I was tinkering bass changes one and Jeremy had another sketch that had all these cool drum tracks. We essentially merged the two and I started writing the words and melody. We finally started to feel like we had something and then Jeremy started with that little electric guitar lick. It fit perfectly. I think I had initially felt some pressure about building a penultimate, anthemic song for the film… but this song came together in such an organic and fun way that it nailed the tone perfectly. It’s anthemic but also extremely loving and kind and fun. 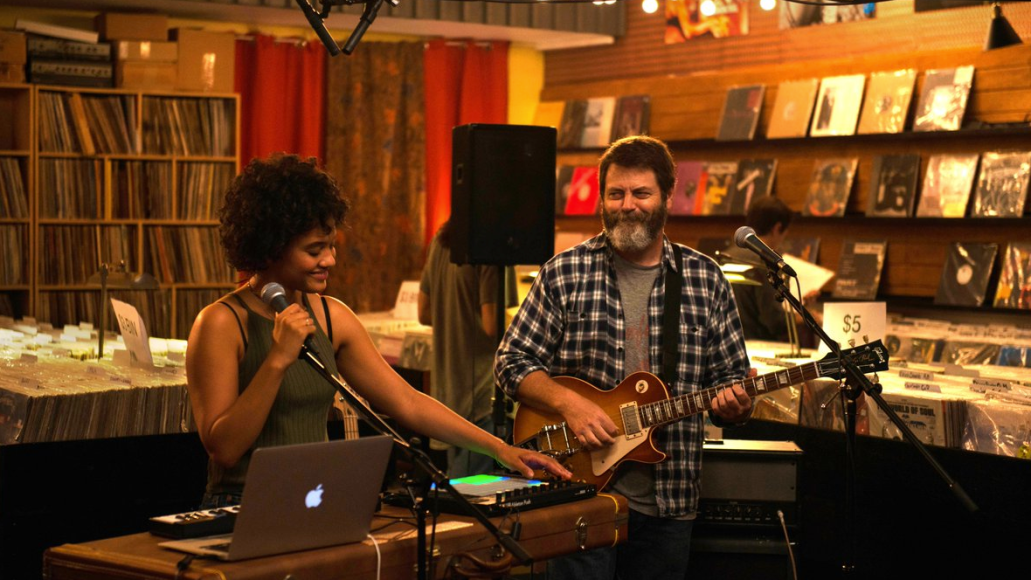 “Red Hook”:
Our first bit of score! So the obvious challenge was how we would support a film already stuffed with music in a way that felt unique, effective, and not too redundant. I started to circle around an idea of using a very simple modular synthesizer to create atmospheric loops, under which we could pedal with some synth bass. Just very kind and warm and non-judgmental, but still very thoughtful. At some point, I stumbled on the idea of these very fragile and fluttery violins to dance at the edges of it all. With all of that happening, I then ran the sounds through a 4-track recorder onto cassette tape. I used the same 4-track I used to track my very first songs with as a teenager. When I was younger, it was like keeping a diary, but with music. That’s always stuck with me and brought me back to the 4-track cassette recorder as a sound treatment. I wanted the score to feel like something Kiersey could have made very privately by herself in her bedroom.

“We’re Not a Band”:
Again, we’ve got our analog synths going through some big plate reverbs and again the 4-track recorder. Sometimes there is a cue where I instantly want to sing on it, and this one of those. It reminded me of SUICIDE and other minimalist 70s NYC electronic stuff. I lived in NYC for 10 years and this cue felt like something you’d have on in your headphones on the subway as you come out of a tunnel and finally see the city. It never fails to move you a little bit.

“Shut Your Eyes”:
“Shut Your Eyes” was a rough acoustic sketch I had sitting around in demo form for a good bit. I liked that it felt like a lullaby. I think, at the time, I wrote it to myself as a bit of a comfort after some heartbreak. There’s an idea, write a lullaby for yourself haha. That being said, as soon as Brett and I started to talk about songs for the film, it popped into my mind and I mentioned it during our very first conversation. It instantly seemed perfect to be this salve from a father to a daughter. Especially in the second verse when he says “I don’t know if I had a lot of love, I’d know what to do with it now”… I initially wrote that thinking of it as a heartbroken young person looking for a partner. Instead, it is given this beautiful context by Nick in the film as a father sorta showing his shortcomings and fragility. He really crushes this one and watching him perform it live for the film was really special. 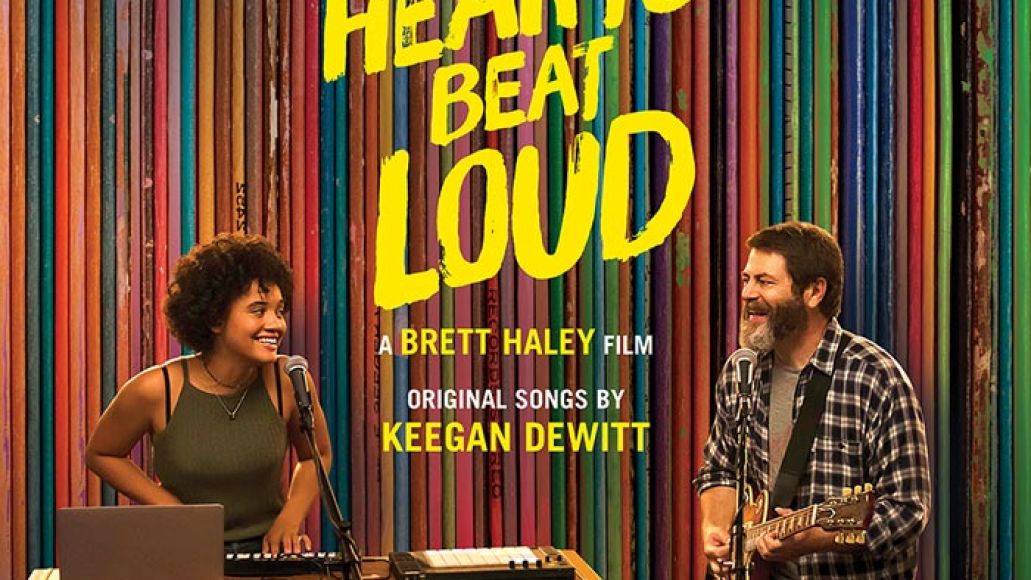 “Hearts Beat Loud (Ballad)”:
I guess you can chalk this one up to me and Brett being greedy haha. Kiersey’s such a talent and from listening to her audition and rehearse, we knew she was crushing the emotional intangibles of the title track. I think we just sprung it on her when she was in the studio acting like it was an ad-hoc idea, but really Brett and I had selfishly wanted a version of her singing it against a sparse piano for our own sake. We didn’t even know where it’d go at the time exactly, but we wanted it none the less haha.

“Conundrums”:
This was the first modular loop I came up with and where the primary idea for the score first began to take shape. You hear some faint reverberation of an electric guitar, which almost feels like some of Nick Offerman’s character’s playing somehow drifting into our score world. Yet again, the idea of the NYC skyline and that magic feeling of New York through headphones was what I was trying to capture here.

“The Past”:
An intimate and truthful sounding piano, filtered through the warbling cassette tape. The beauty of those crappy 4-track motors is that they are never perfect and they move the tape in these great unpredictable ways. It fills anything with character instantly. This cue feels really thick with the tenderness that Sasha and Kiersey share. I think it eventually ended up somewhere else, but so much of this cue was the chemistry between those two for me. It’s really kind and honest. 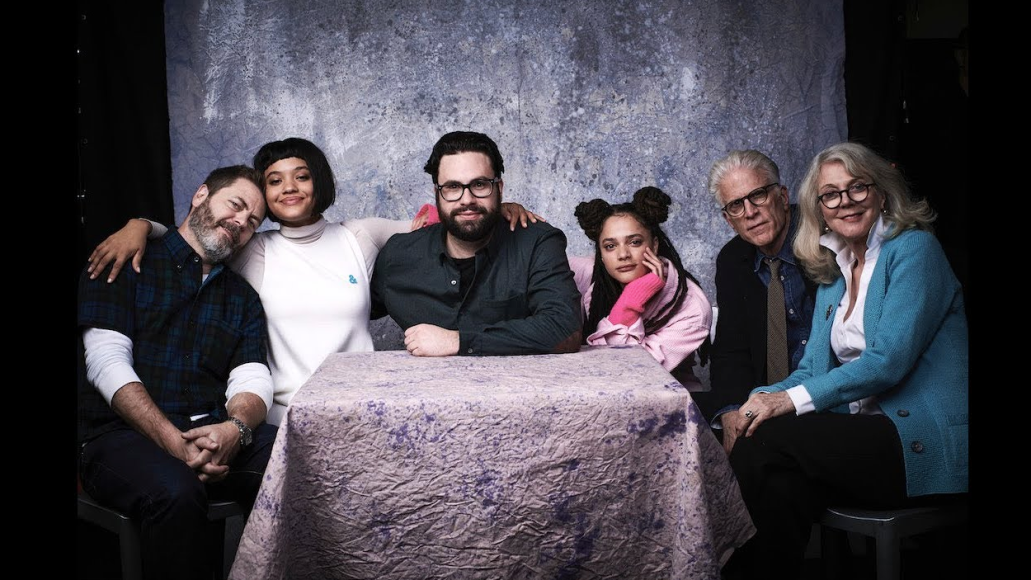 “Help Wanted”:
We’re back to our arpeggiating modular notes through the big wide reverbs, this time accented with a little of the intimate piano from “The Past”. In my mind, this is Kiersey’s world now shaded with Sasha. Nick’s world now is beginning to bleed into Toni Collette’s world and we see our two-person family start to grow and expand.

“What If…”
This cue almost sounds like it’s fading away into the distance. Things are changing. In many ways, Nick’s character, by embracing a new chapter, is losing a little of his memories with his wife, with Kiersey as a child. Kiersey, facing a brand new adventure, risks leaving and not getting to make new memories with her dad. This cue, for me, is the sound of knowing that you have to embrace what’s next, even if it means that you have to move away from things that are deeply meaningful to you.

“Everything Must Go (Frank Collage)”:
Getting this instrumental version of this song started as a purely narrative demand at first, we wanted Nick layering and rehearsing in an almost therapeutic way in the film. Once we had created it for them to film to, we really loved how it helped link our songs to our score and create this bridge. To me, it’s our way of subliminally saying that our score is actually just a more subconscious version of our songs. The score is almost like the memories of this magical summer just floating around.