Beyond the Gates: Newport Folk is a festival apart. In 2018, we’re wont to look at the North American music festival climate as a changing one, a place where big-brand names no longer carry preeminence and the companies behind them seem unable to sustain expansions. Yet, the only way this shifting scene impacts NFF, if it does at all, is radius clauses. Next year will mark the event’s 60th anniversary; Coachella just turned 19. To discuss one in the context of the other is almost like comparing Helen Mirren to Jennifer Lawrence. Sure, they both deserve admiration, but one is Helen Mirren.

If anything, festivals should be looking to the culture of Newport as a model of how a focus on music could really save the struggling ecosystem. There’s not a lot of flash at Fort Adams, except for what happens onstage. It’s the type of place that can have an unannounced headliner and people will be disappointed when it’s perhaps the biggest modern indie folk rock band in the world — booked on a non-profit budget, mind you — and not someone like Bruce Springsteen (fingers eternally crossed). In an age of flagging ticket sales, Newport will sell out before even announcing a lineup, which will turn out to be a quarter filled with never-before-heard collaborations and vaguely defined tributes, and people will still be stoked. No other festival out there is as good at building up goodwill among its true believers and following through with magic year after year. Why would we expect 2018 to be any different? 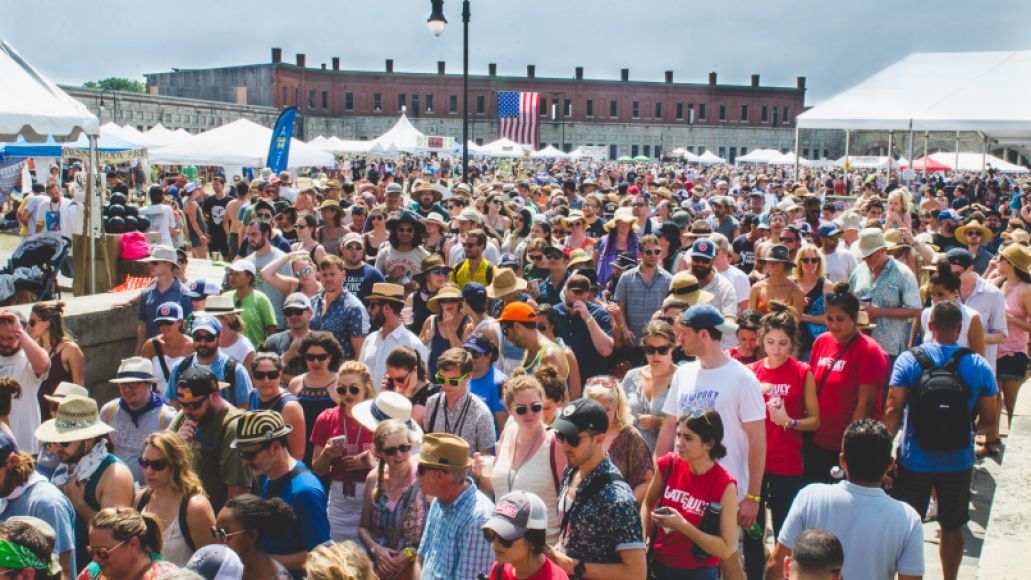 Best Bites: It’s hard to pass up seafood at a New England music fest situated right on a harbor, and you can bet Newport has some crave-worthy crustaceans. Matunuck Oyster Bar has had a presence at Fort Adams for years, serving up raw oysters, clams on the half-shell, shrimp cocktail, and, of course, lobster rolls. I know what you’re thinking: Is it worth the cost? At a pretty affordable $16 and coming with a satisfying pile of well-mayonnaised meat, you bet your shucker it is. 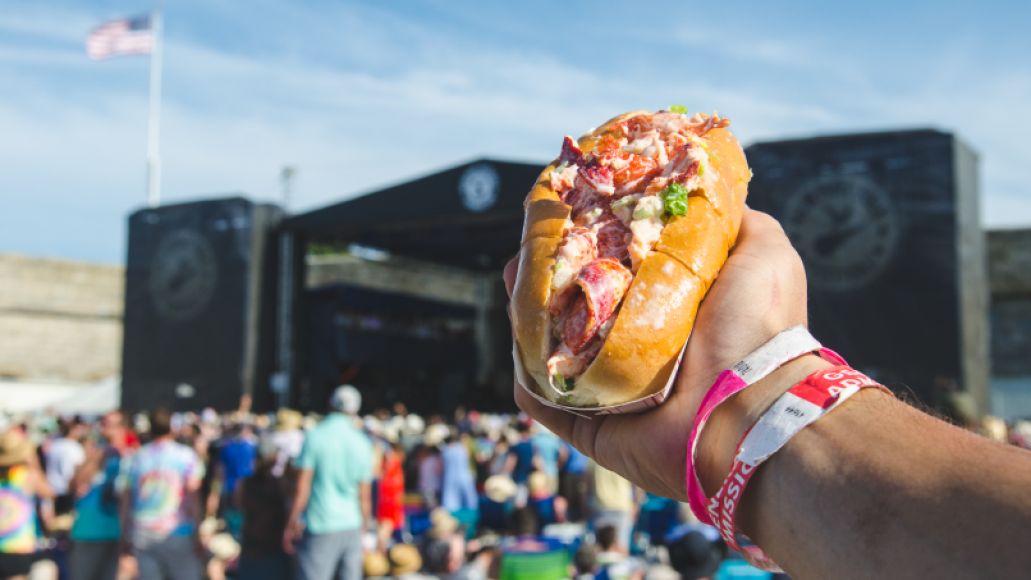 Festival Fashionista: Toots and The Maytals made a solid stab at Best Dressed with their Jamaica-inspired attire, but Fantastic Negrito pulled off a pair of incredible outfits. Onstage, the standout roots musician wore a green changshan-style jacket with bright blue pants with a red No. 2 pencil running down the leg. Backstage, he donned a longer Indian jacket, replete with gorgeous bronze embroidery. Everything he does calls attention to his uniqueness, whether it’s his dress or performance. 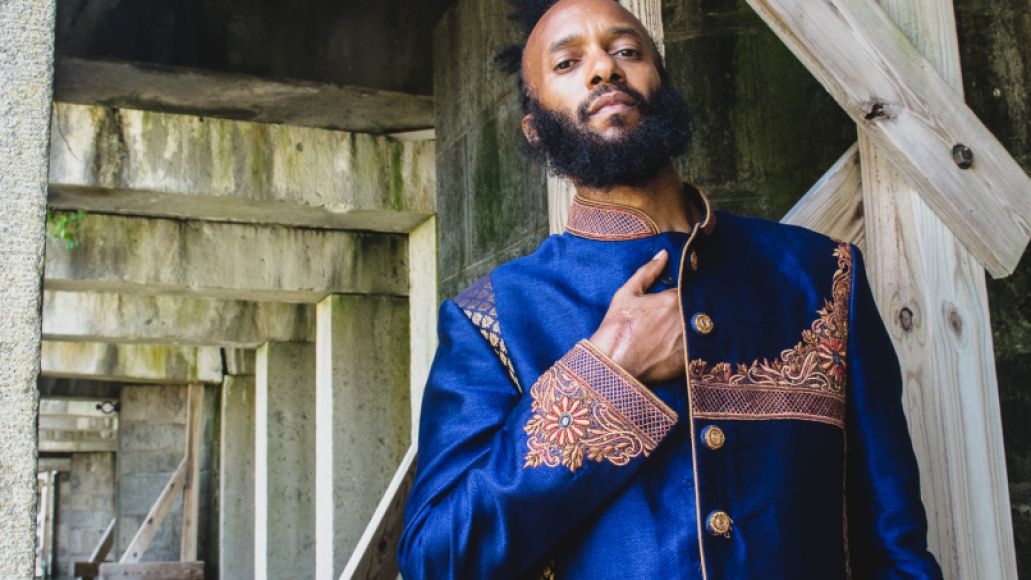 Newport Country Festival: Producer Jay Sweet and the team behind Newport’s booking have been fuzzing up the definition of “folk” since coming on board in 2008. This year embraced country perhaps more so than any time in recent memory, evidence by headliner Jason Isbell and The 400 Unit. The former Drive-By Truckers member and his band — including violinist Amanda Shires, his wife — turned in as solid a set as you could want, but it was Sturgill Simpson who took the country crown with his explosive, guitar-shredding performance earlier in the day. Even a more understated artist like Tyler Childers was warmly embraced, while returning favorite Margo Price proved worthy of her Fort Stage upgrade — and not just because she brought out John Prine for “In Spite of Ourselves”. 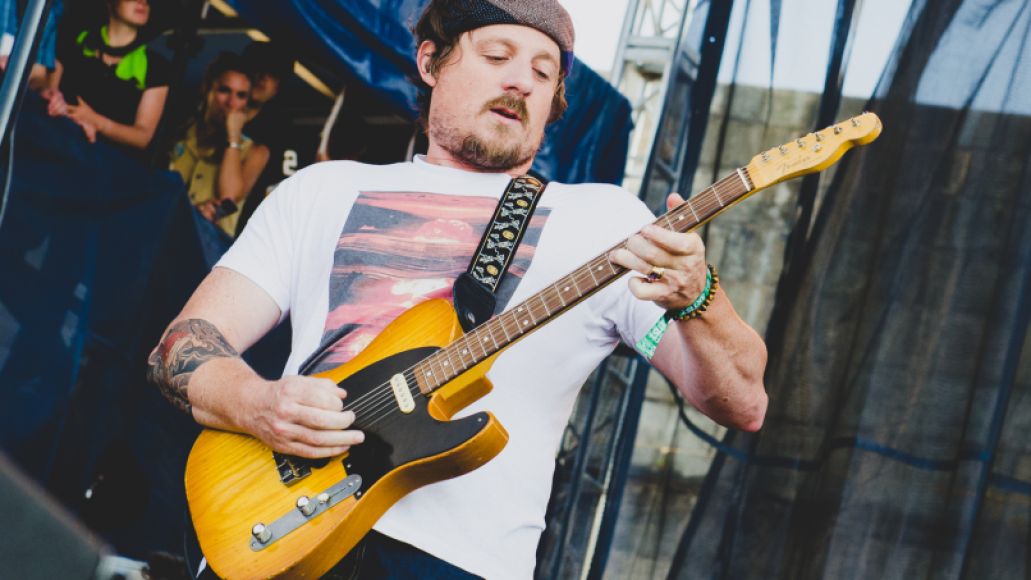 Chained to the Rhythm: New Orleans funk-soul group Tank and the Bangas likely fell on the Newport radar thanks to winning 2017’s NPR Tiny Desk Contest, but they’ll be forever imprinted on festival attendees after the nonstop kineticism of their afternoon performance. They came out hard with their blend of hip-hop, rock, and funk and will probably go down in history as the first band to cover Nirvana (“Smells Like Teen Spirit”) at Newport Folk. Even more than the undeniably danceable sound, it’s the dynamic energy Tarriona “Tank” Ball and every one of the nine-piece Bangas share that made them one of the most memorable discoveries of the weekend. 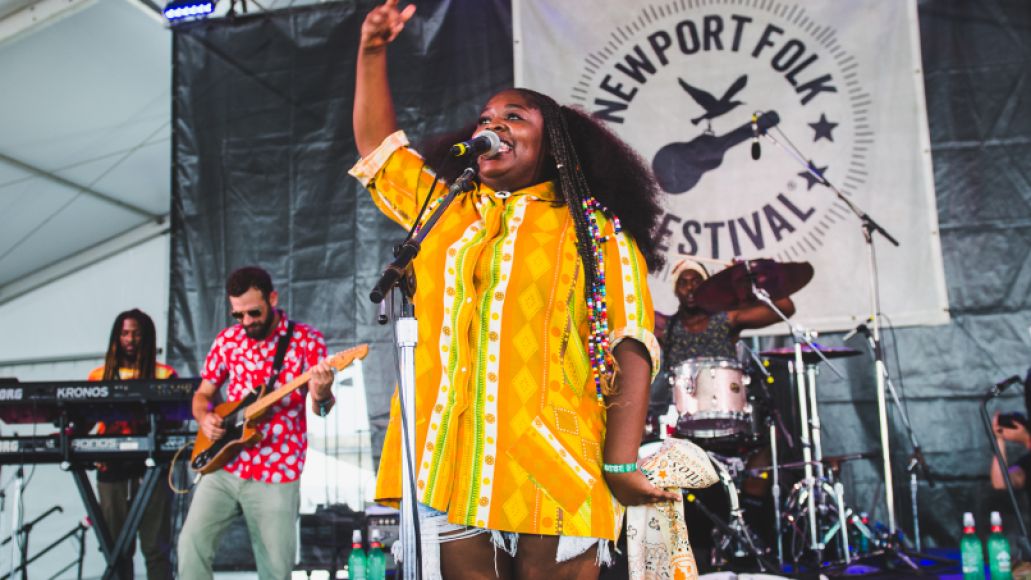 Tank and the Bangas, photo by Ben Kaye

That One Performance: Every time you see The Lone Bellow, they seem better than the last. Leaving their set Sunday afternoon made one wonder how they’re not yet commanding a more prominent schedule placement. Zach Williams, Kanene Donehey Pipkin, and Brian Elmquist have some of the best harmonies in modern Americana, yet they’re as captivating singing hushed melodies around a halo microphone (“Watch Over Us”) as they are stomping about the stage and hollering (“Green Eyes and a Heart of Gold”). They also delivered the Pipkin- and The National-co-written “There Is Love All Around You”, an ode to Frightened Rabbit’s late frontman Scott Hutchison, for the first time ever, adding a touching moment to powerful set. 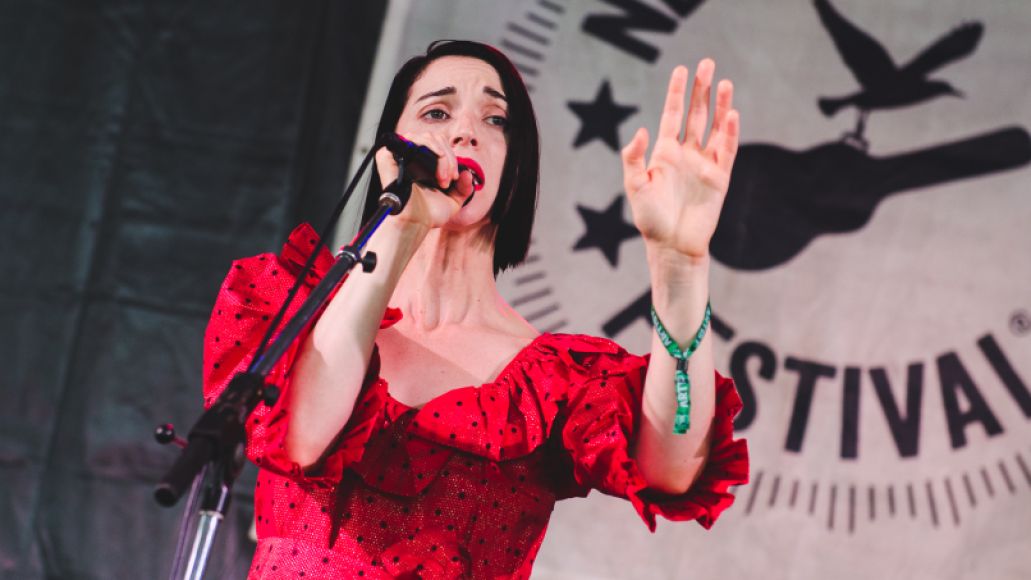 Newport Indie Festival: Indie singer-songwriters have been one of the core reasons NFF’s second resurgence has made such an impact. This year brought everyone from returning rocker Courtney Barnett (who also joined her partner Jen Cloher’s band) to rare treats like Hamilton Leithauser & Rostam. St. Vincent’s stripped-down performance alongside pianist Thomas “Doveman” Bartlett was a stirring reminder that Annie Clark is perhaps modern indie’s most meritorious artists, and her booking was straight genius on the part of Jay Sweet. Moses Sumney, Phoebe Bridgers, and Jenny Lewis all demonstrated the wide appeal Newport has mastered in recent years. 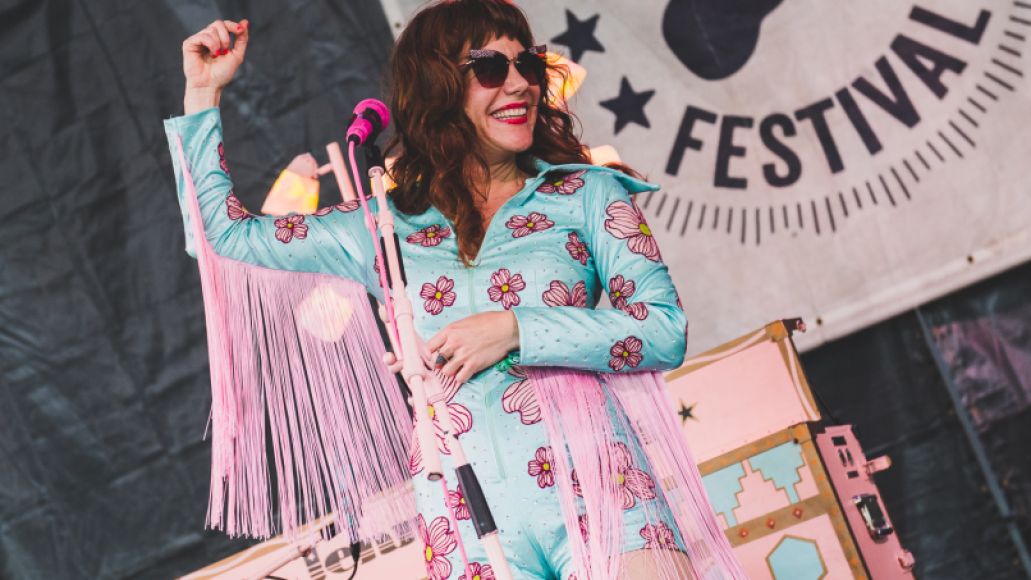 Don’t Believe the Hype: After the success of acts like Flight of the Conchords and Nancy and Beth, booking Cheech and Chong seemed like a bold yet assured home run. While there were certainly some amusing bits in their set, a lot of the material felt dated even for a venerable fest like Newport. Making things worse was the stand-up by Tommy Chong’s wife, Shelby, between bits. Punchlines like “retard” and calling women dealing with PMS “bitch” just don’t land in 2018, and Tommy’s quip about there being a fire alarm as the crowd steadily trickled out was indicative of such. 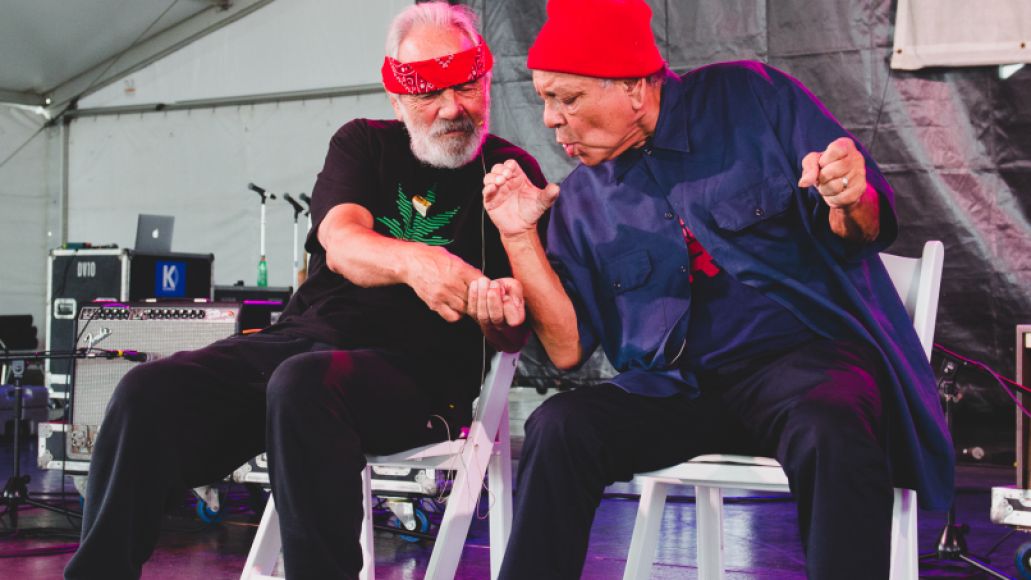 Best of the Tiny Fonts: With no lineup poster like most festivals, “Tiny Fonts” aren’t exactly a thing at Newport — everyone gets an equal level of respect. If you look at those artists tasked with opening the stages on any given day, though, the standout would have to be Low Cut Connie’s Quad Stage performance. Adam Weiner and the Philadelphia band defied you not to boogie as they delivered their rollicking rock and roll. The frontman was up on his piano (named Shondra) as much as he was playing it, shaking his butt or literally ripping the hair from his chest and blowing it into the crowd. The Quad had some of the most intense energy of the whole weekend, and Low Cut Connie turned the ignition on Saturday. 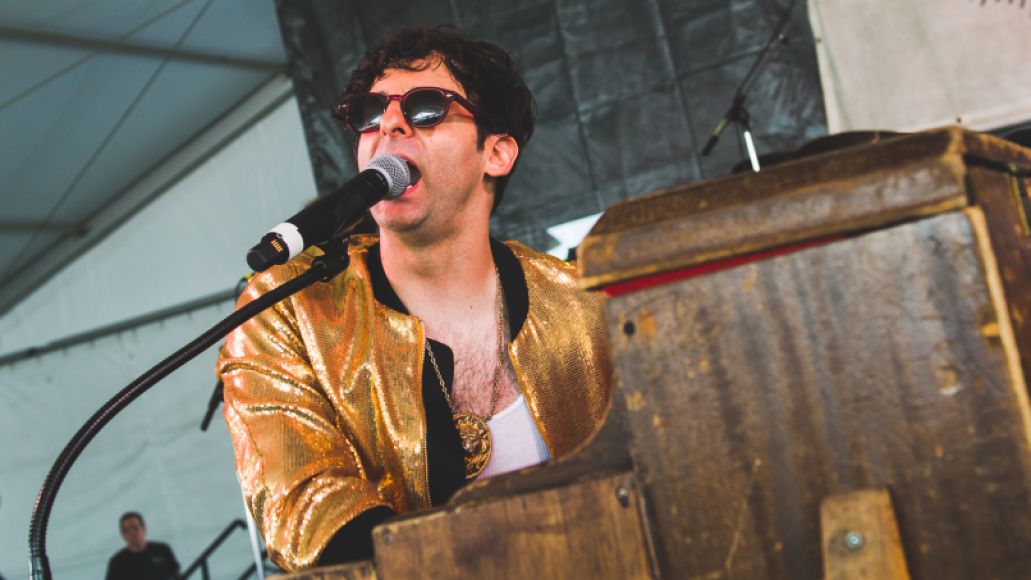 Why Can’t We Be Friends: Again, this is almost an unfair category for Newport. John Prine, Jerry Douglas, Leon Bridges, Mavis Staples, and Warren Haynes all made unscheduled appearances this year. Perhaps the most surprising, though, was the appearance of David Crosby during Isbell’s Friday night headlining set. Along with the rest of CSNY, Crosby is responsible for so much of the type of music that helped define Newport’s ’60s heyday, so having him there to sing “Wooden Ships” and “Ohio” fit the festival’s legacy beautifully. 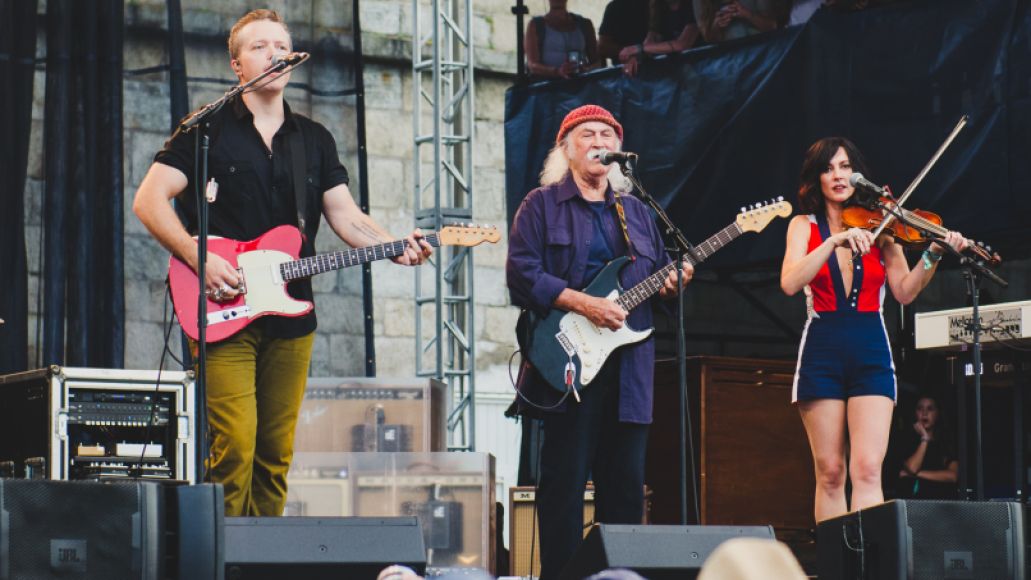 Surprise Headliner: It didn’t take people long to figure out that Mumford and Sons were Saturday night’s unannounced headliner. The general reaction was disheartening, as you just sort of assume guys like Neil Young or Springsteen will pull something like that one of these years. But if you stayed through the British band’s performance and left pretension aside, there was little to be disappointed about. With a setlist tailor-made for Newport and guests like Maggie Rogers, Phoebe Bridgers (for a Radiohead cover, no less), Jerry Douglas, and the great Mavis Staples, Mumford’s first full-band performance of 2018 deserves to go down as one of their best. 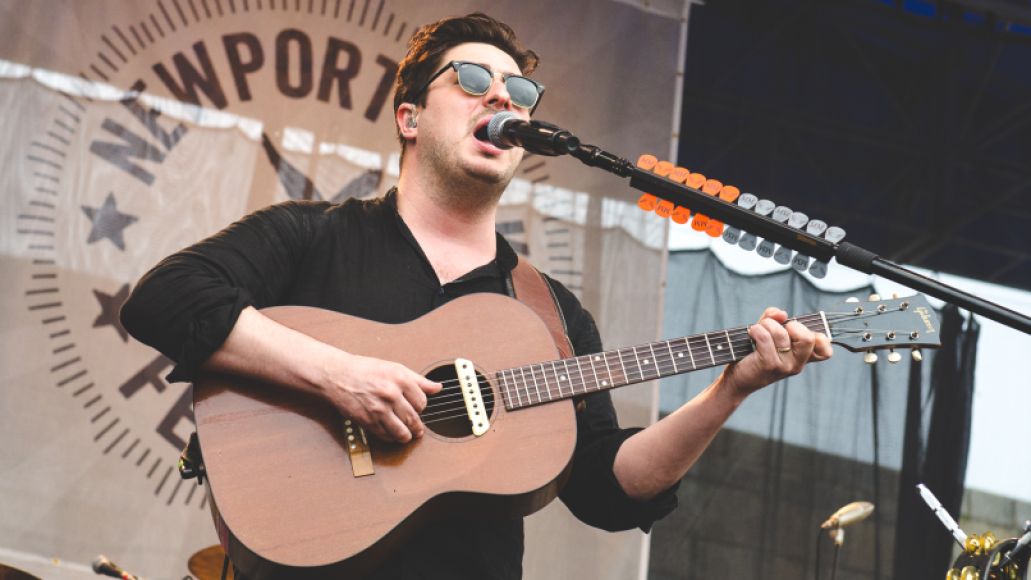 Phones Up: You never know when something once-in-a-lifetime is going happen. The only guarantee is that whoever closes down Sunday night is going to bring every damn musician possible onstage for one massive send-off. A Change is Gonna Come, the protest music revue led by Jon Batiste and The Dap Kings, gave us tons of moments, one of the most memorable being Chris Thile and Batiste’s mandolin-vs-piano duel. Nothing will ever compare to that closer, though, as Mavis Staples led everyone (Leon Bridges, Bermuda Triangle, Valerie June, Nicole Atkins, The Lone Bellow, Kam Franklin of The Suffers, Rachael Price, Pres Hall…) in a heavens-reaching sing-a-long of The Staples Singers’ “Freedom Highway”. 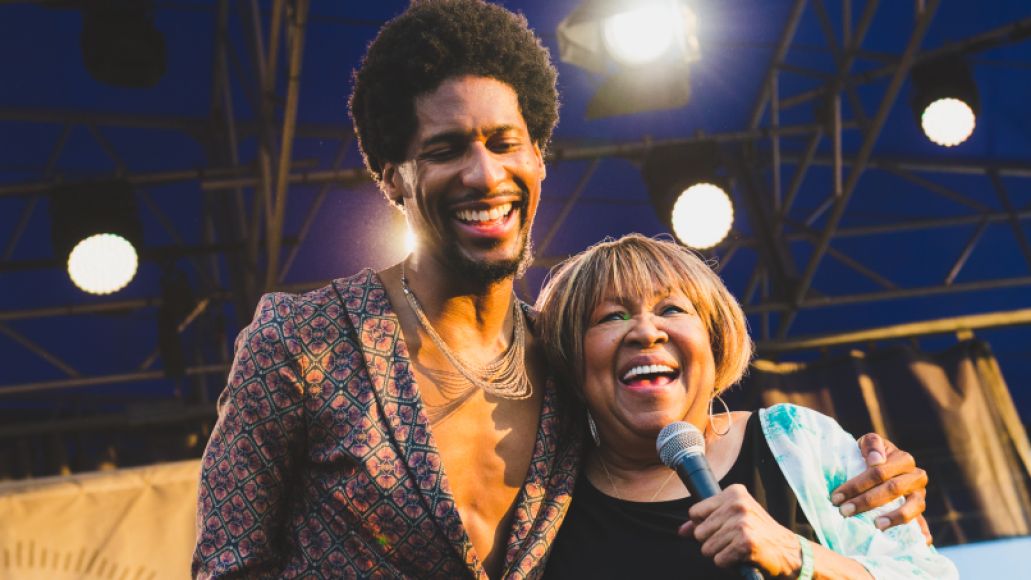 Coming Home: There is no coming home from Newport. Once you embrace the festival, become part of the Folk Family, it’s always there. As Governor Gina Raimondo and George Wein announced before Valerie June’s set, we now have confirmation that it’s going to be there for the next four decades. Returning next summer to see who makes a surprise appearance, who covers what iconic song with whom, and what never-before-seen collaboration makes its debut is what coming home will be.