For a show as deeply rooted in ’80s ephemera as Netflix’s Stranger Things, there’s been a huge absence of malls. Well, that’s set to change in season three, which just received its first teaser via the show’s official Twitter account.

Posing as an ad for a retail oasis dubbed Starcourt Mall, the teaser features only one of the series’ recurring characters, Steve Harrington (Joe Keery), who we see working at a food court ice cream shop alongside Robin, a new character played by Maya Hawke.

(Read: Stranger Things 2 Succeeds on Nearly Every Level, But Especially With Its Characters)

The teaser ends with the promise that Starcourt is coming “next summer,” which we can safely assume means the season is slated for release a year from now. No official word has been released on that front as of yet, however.

Watch it below, and marvel at the era-specific production design.

Ahoy! Something is coming… to Hawkins, Indiana! pic.twitter.com/BI4wFRVzvB

As an added treat, the show has shared a statement from Hawkins’ Mayor Kline, who will be portrayed in the third season by Cary Elwes. The letter, which is filled with the kind of bland patter you’d expect from a lame duck government official, doubles down on the mall’s “grand opening…next summer” and notes that it will contain The Gap, Sam Goody, Waldenbooks, and Claire’s, which should send a nostalgic current through any child of the ’80s. 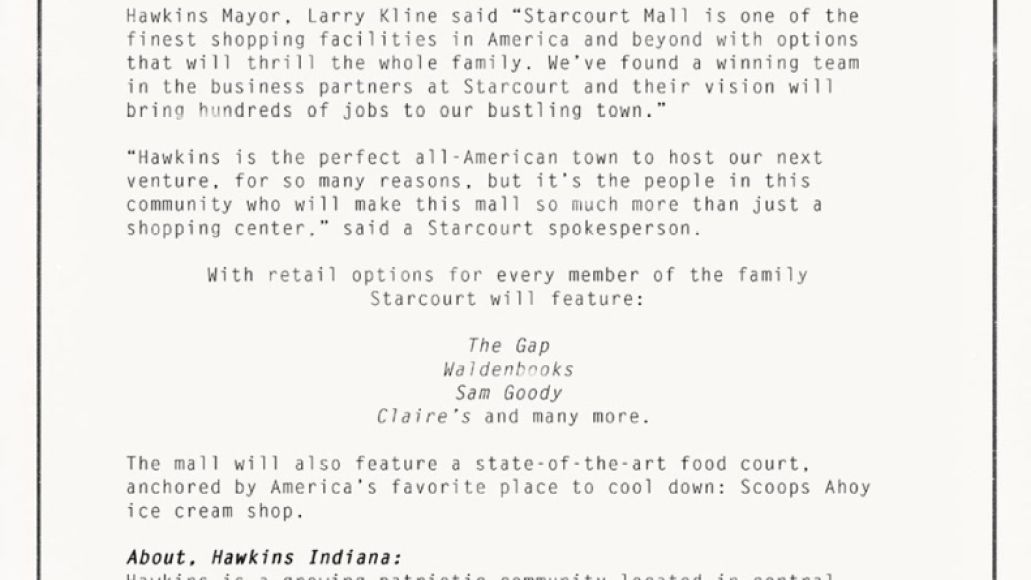 Stranger Things’ third season began filming in April, and will take place roughly one year after the second season, with events circling around the release of Back to the Future in the summer of 1985.

Below, listen to the show’s Finn Wolfhard discuss the upcoming third season on Kyle Meredith With…: