DC Films and Warner Bros. may still be figuring out how to reconfigure their corner of the comic book movie market (say, by making two Joker films at the same time), but some things were already well in motion before the restructuring. One of those was an adaptation of Shazam!, a character that straddles the line between mysticism, playfulness, and straight up super powered hero. Now, we have our first look at Zachary Levi in the title role thanks to Entertainment Weekly.

Levi (star of NBC’s Chuck) bulked up big time to play Shazam, the adult-sized hero 14-year-old orphan Billy Batson (played by Disney star Asher Angel) transforms into when he shouts that magic word, “Shazam!” From the bright colors and silly imagery (and, frankly, the source material), it’s clear that DC was gunning for a lighter type of comic book fare than their past DC Extended Universe entries. Director David F. Sandberg (Lights Out) took elements from throughout Shazam’s history for the costume, including the New 52’s hood and lightning bolt, the Golden Age’s shortened cape, and the gauntlets from some of the character’s animated movie appearances.

Standing next to Levi’s Shazam on the crutch is Freddy Freeman, another orphan friend of Billy’s played by IT star Jack Dylan Grazer. Check out the picture below. 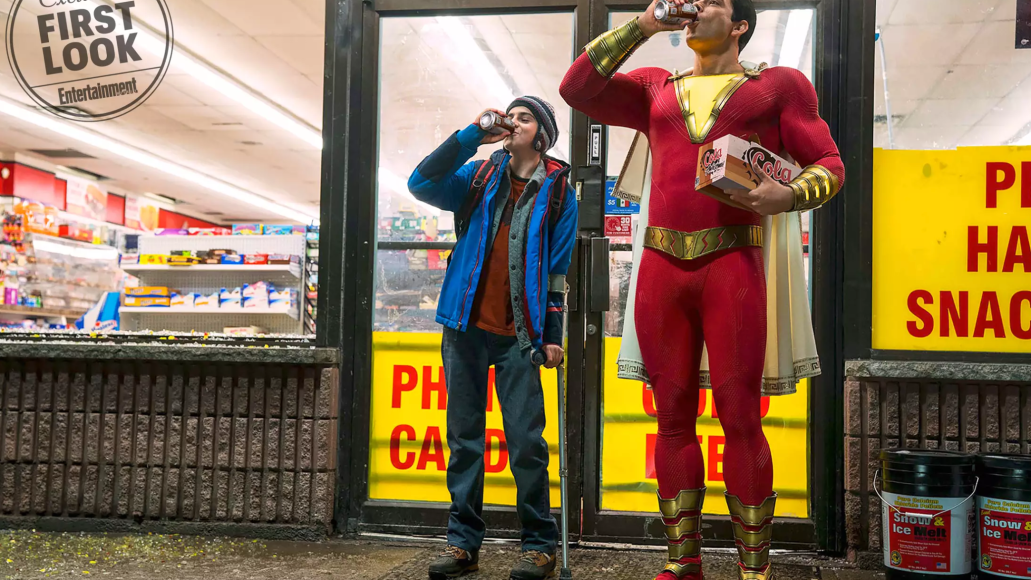 Out April 5th, 2019, Shazam! finds young Billy meeting comic book fan Freddy when he’s assigned to a new foster home. On a fateful subway ride, Billy encounters a mysterious old wizard (Djimon Hounsou), who claims he’s been searching for the right successor to inherit his abilities. It turns out Billy is that successor, and all he has to do to access a wide range of god-like powers is say the magic word: “SHAZAM!”

Before audiences get a taste of Levi as Shazam, they’ll get another deep sea adventure with Jason Momoa when the James Wan-directed Aquaman dives into theaters on December 21st.