Here’s the story of a gigantic fool who thinks there’s some kind of demarcation between punk and politics. Tim Hildebrand, a Trump-supporting farmer, was shocked, apparently, to learn that Social Disortion’s Mike Ness, a 40-year vet of the punk scene, was critical of right-leaning politicians. After Ness trashed our president onstage at a July 17th show at Sacramento’s Ace of Spades, Hildebrand found it necessary to verbally spar and hold up his middle finger (for multiple songs) in “silent protest.” Surprise, the 56-year old Ness, who’s been quite vocal about his distaste for Trump as of late, did not appreciate that.

In the below video, you can see Ness offer up both a loogie and a finger of his own before diving into the crowd to throw some punches. Hildebrand left the show with two black eyes, a busted lip, and a concussion. He claims that he “wasn’t able to defend myself” due to people in the crowd holding him back. Not very alpha, bro. 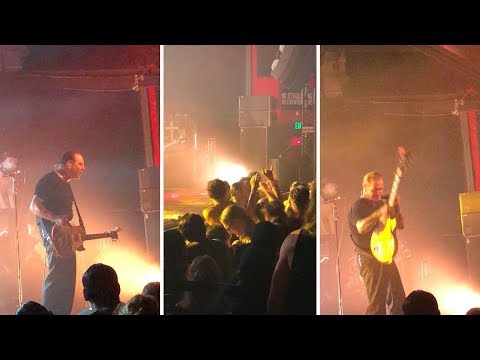 “I pretty much said I paid for your music, not your politics,” Hildebrand told CBS-13, adding that he plans to press charges against Ness. “I stood pretty much with my silent protest with my middle finger up for the next two songs.”

He added, “If he wants to have a talk someday, man to man, I would love that but he would have to not be a child about it.”

No, conservatism is not the new punk rock. Y’all are just fucking annoying.

Sacramento Police are investigating the incident.