Avengers: Infinity War ended with the most tantalizing of teases for Marvel’s next cinematic superhero, Captain Marvel. Today, we’ve finally been given our first official look at Brie Larson as the half-alien powerhouse.

Entertainment Weekly has shared the cover of their upcoming issue, which features Larson powering up as Captain Marvel. Set photos previously gave fans a glimpse at the character, but in a green-and-black getup that some fans found disappointing. This new image is sure to please everyone, though, as she’s in an extremely comic-faithful suit of blue, red, and gold. 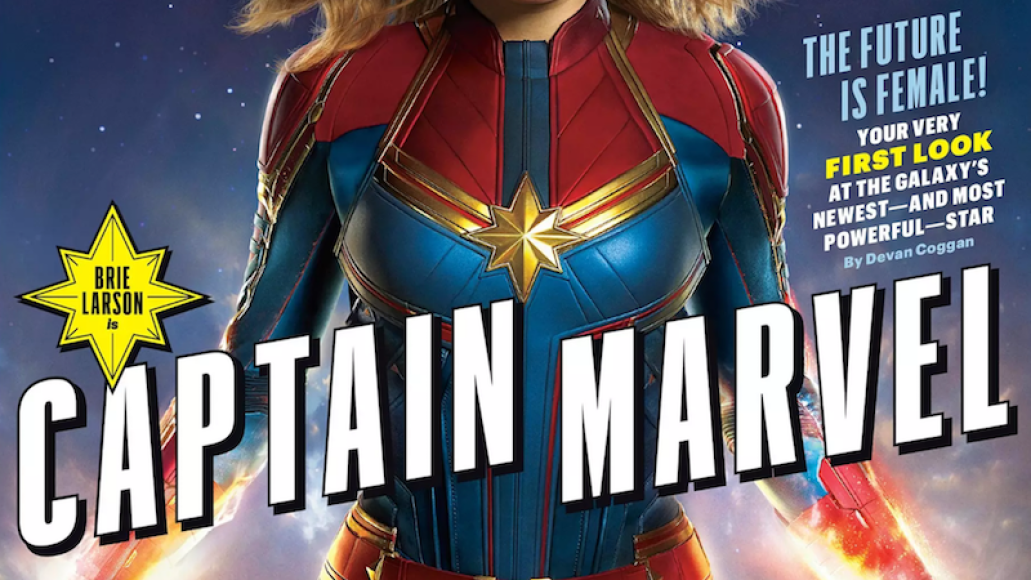 Captain Marvel, aka Carol Danvers, is a human fighter pilot who becomes an intergalactic superhero when her DNA is spliced with that of a Kree alien. However, it looks like we may not learn that origin right away, as EW reports Captain Marvel will begin with Danvers already powered up and a member of Starforce, an elite Kree military team led by Jude Law’s Mar-Vell. (You can only imagine where Danvers eventually gets her superhero name…)

Set in the ’90s, Captain Marvel finds Danvers returning to Earth in search of answers about her past. When she arrives, she must fend of an invasion by the classic shapeshifting Marvel villains the Skrulls, led by Ben Mendelsohn’s Talos. The time period allows the filmmakers to explore a pre-Avengers universe, one where Nick Fury (Samuel L. Jackson) still has two good eyes and a desk job.

(Read: After Avengers: Infinity War, What’s Next for the Marvel Cinematic Universe?)

“This is not a superhero who’s perfect or otherworldly or has some godlike connection,” explains Anna Boden, who co-directed the film with Ryan Fleck. “But what makes her special is just how human she is. She’s funny, but doesn’t always tell good jokes. And she can be headstrong and reckless and doesn’t always make the perfect decisions for herself. But at her core, she has so much heart and so much humanity — and all of its messiness.”

EW has promised more Captain Marvel images and interviews over the coming days, so stay tuned. The film flies into theaters on March 8th, 2019, after which Larson will appear in the yet-untitled Avengers 4 to help clean up the devastating mess of Infinity War.

Update: EW has revealed 10 more images from Captain Marvel, including looks at nearly every major character. In addition to more shots of Larson as Danvers and the title character, we get to see that aforementioned green-and-black suit as she walks with Starforce. MCU fans will recognize one of the characters on her left as Korath (Djimon Hounsou) from the first Guardians of the Galaxy. Also in the group is Gemma Chan as Minn-Erva.

In the bottom corner of that same shot we see the back of Law’s head as well as a familiar silhouette. That’s Lee Pace as Ronan the Accuser, GotG’s main baddie. In the earlier film, he’s an outcast extremist, but in CM, he’s still a high-ranking Kree Accuser. Further images reveal better looks at both characters.

Most exciting for fans is perhaps our first look at the Skrulls. Mendelsohn’s Talos stands at the forefront of the group, and you can see his undercover human form, which he uses to infiltrate S.H.I.E.L.D., in a later picture.

We also get to see a digitally de-aged, eye-patchless Jackson as future S.H.I.E.L.D. head Fury, plus a surprise look at Lashana Lynch. Lynch plays Danver’s close friend Maria Rambeau, another pilot who flies under the call sign “Photon”. The tease for comic readers here is that in the source material, Maria’s daughter Monica is a superhero who originally flies under the Captain Marvel name before changing it to, you guessed it, Photon (and later Pulsar and later still Spectrum).

Check out all the pics below. (All images via Chuck Zlotnick and courtesy of Marvel Studios.) 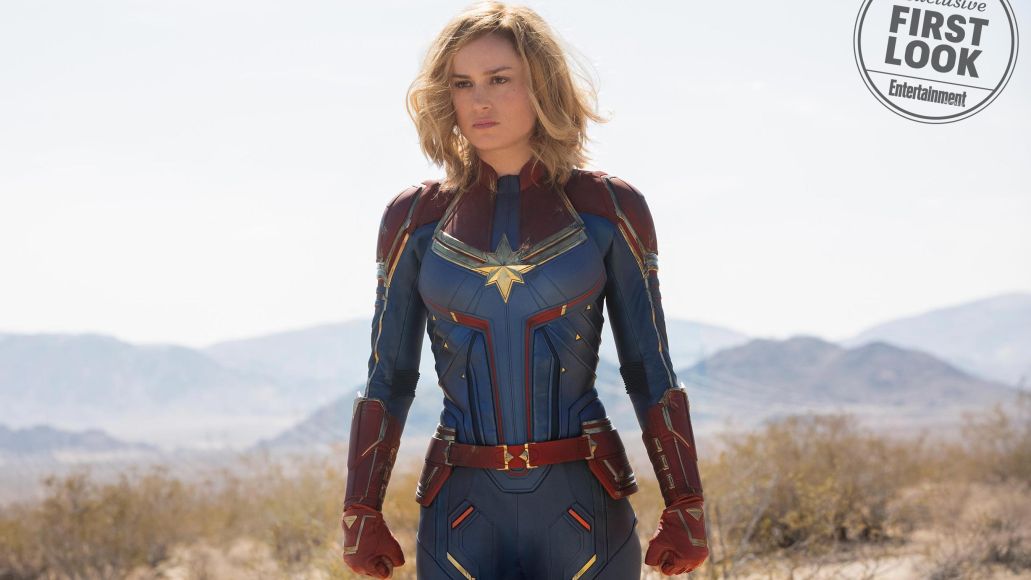 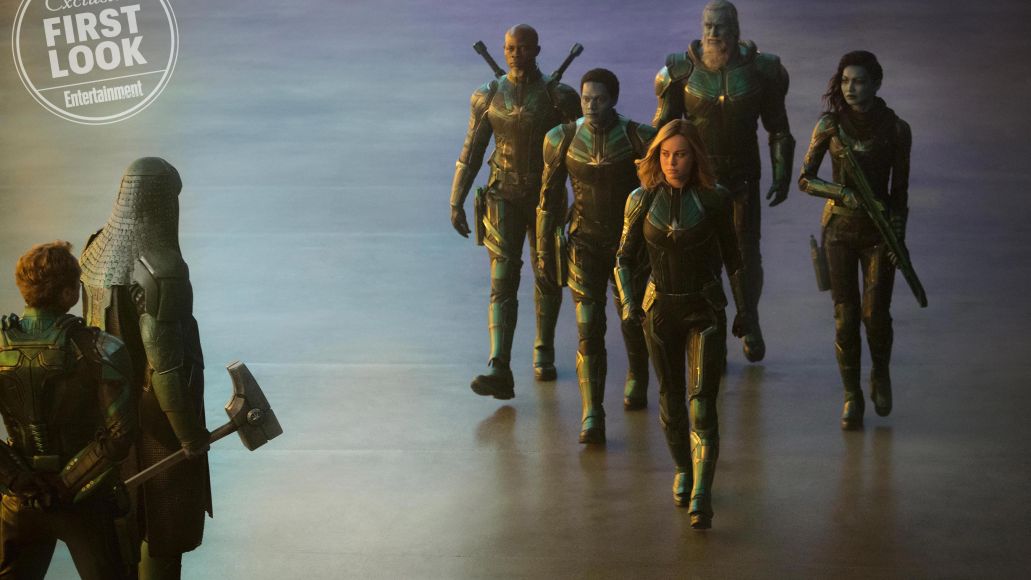 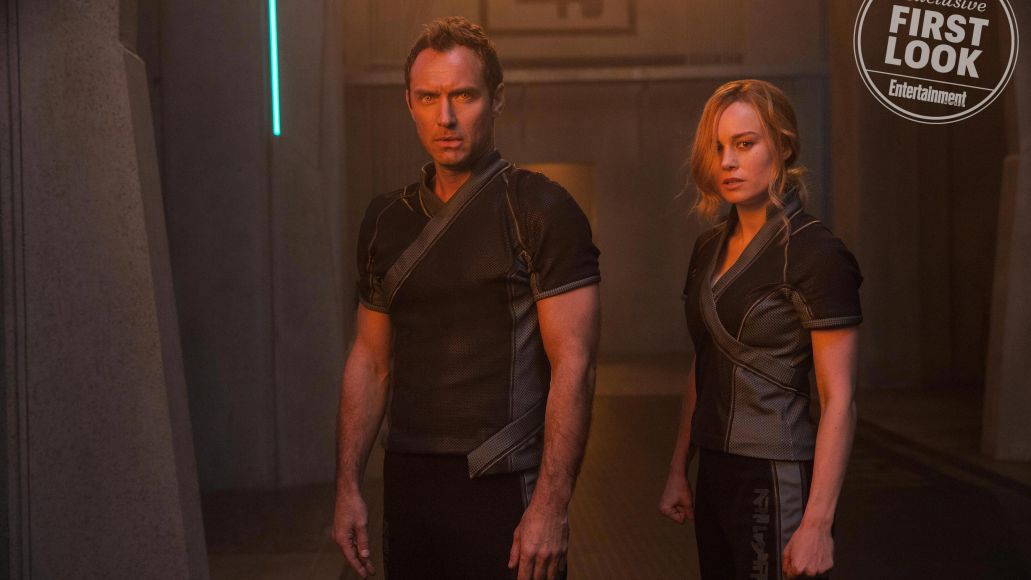 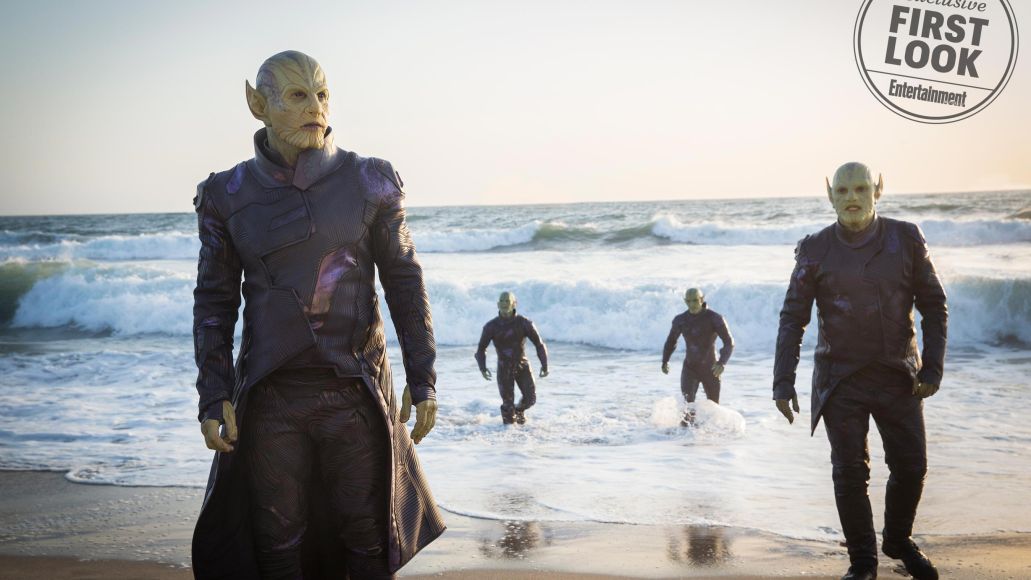 Ben Mendelsohn as Talos, and the Skrulls 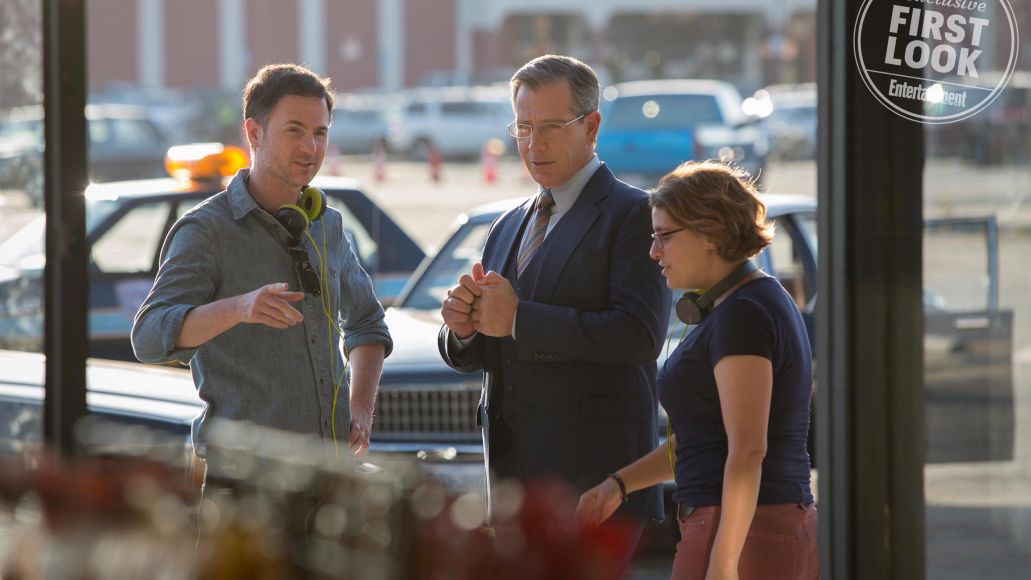 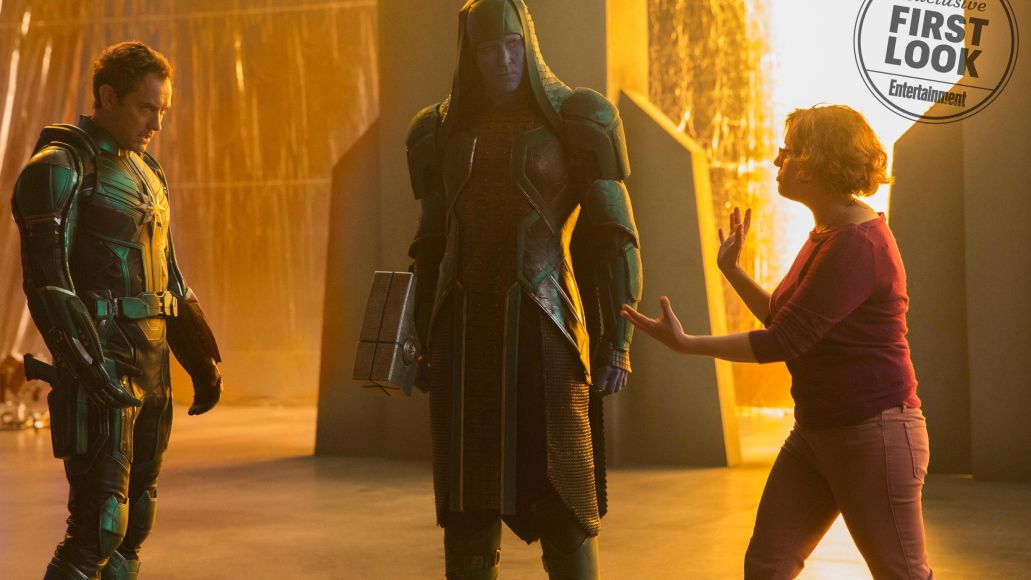 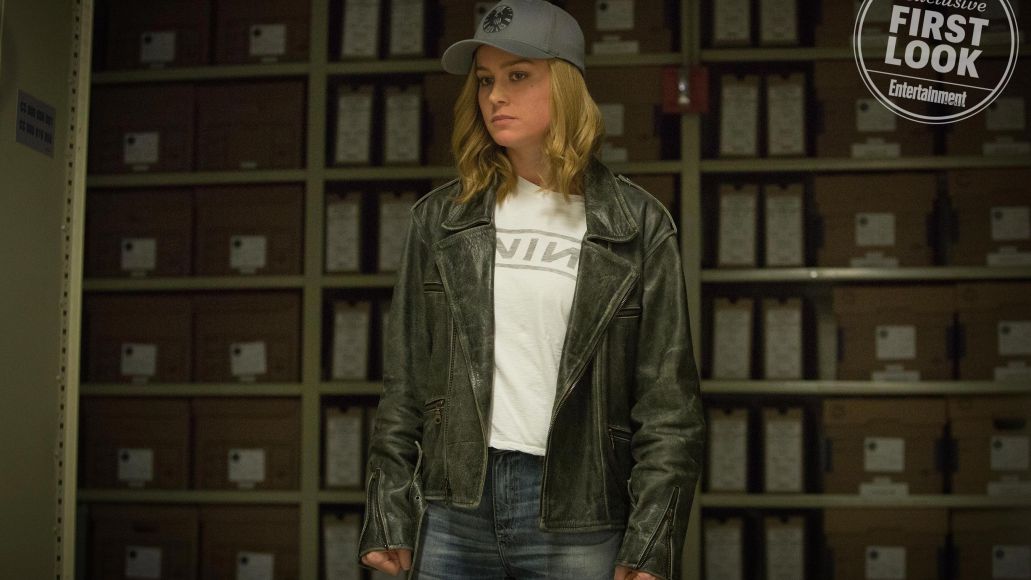 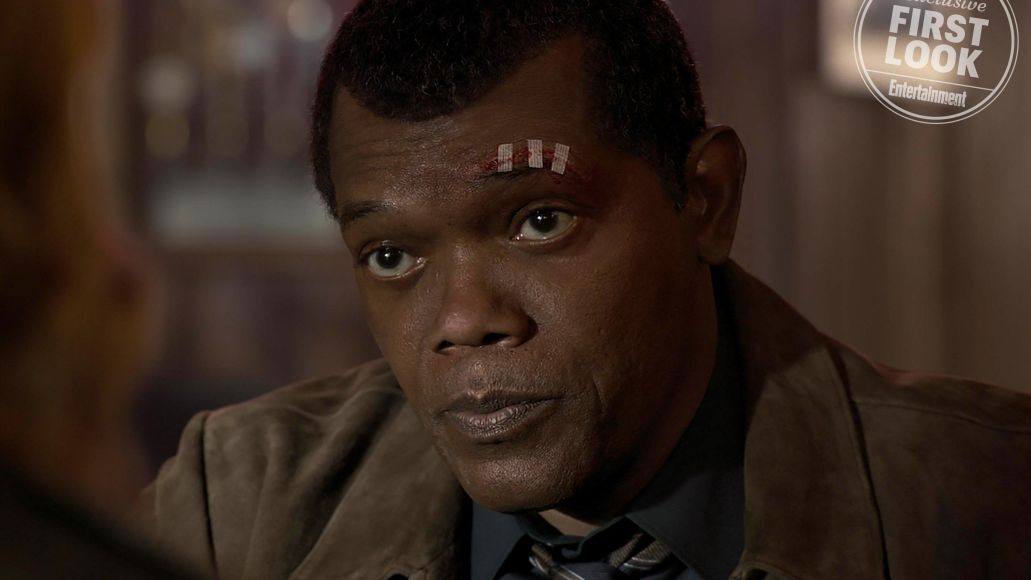 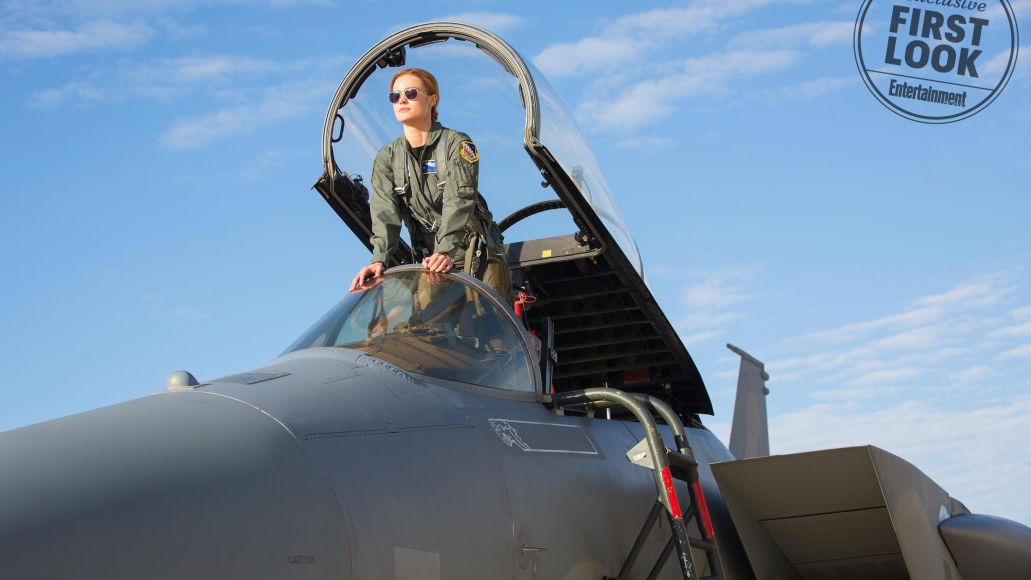 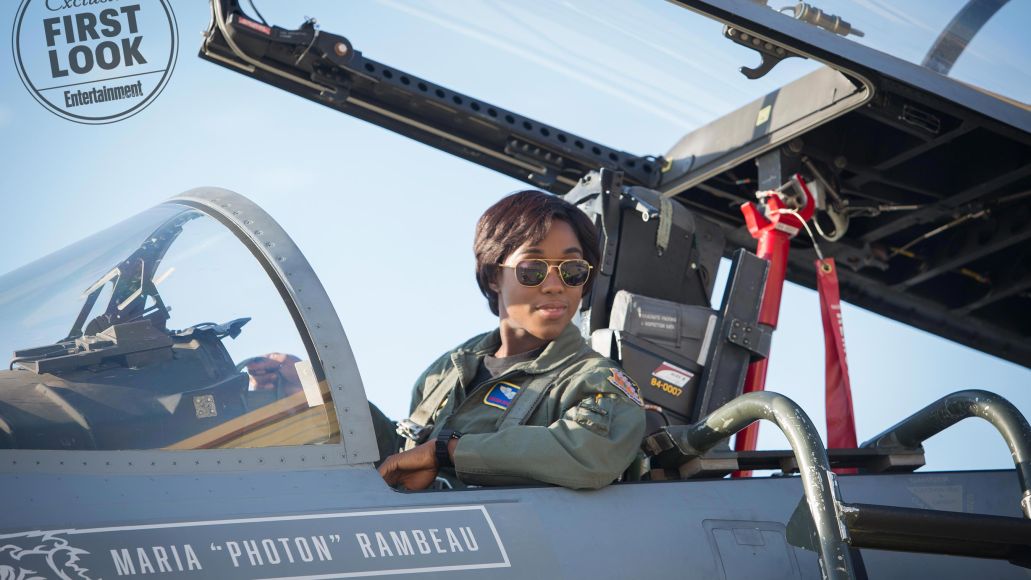