There’s just too much TV these days. We’re not complaining about it, at least not really, but it’s the truth. When a series used to develop what we once referred to as “water-cooler buzz,” you were waiting and discussing for a week or more between installments. You were able to breathe. Digest. Go outside a little. Now, it seems like with every new day another buzz-heavy series premieres or returns, and between broadcast television, cable networks, pay cable networks, and the increasing deluge of digital viewing options, there’s just too damn much.

That’ll hardly stem the rising tide of new shows, however, and it’s particularly overwhelming when so many of them are so damn great. There’s a series of note for pretty much any taste these days, and if July’s announcements of the nominees for tomorrow’s 70th Primetime Emmy Awards are any indication, we’ve never been more split over the things we like. If anything, the only commonality is that (for the most part) we like them bigger and louder by the season. There are a slew of familiar Emmy faces still featured for shows old and new, but bold, new voices rise to join them. Legends of screens big and small stand beside emerging talents, and in a year where a handful of consistent and reliable series were snubbed or left out of the running entirely, we’re eager to see where the ceremony looks next.

In that spirit, the TV team at CoS has made its best predictions of where we think the 2018 Primetime Emmys are going, where we wish they were, and the people who should’ve been invited along for the ride. The 70th Primetime Emmy Awards ceremony will take place on Monday, September 17th, but knowing how these things work, that’ll likely only kick off a whole new set of debates. 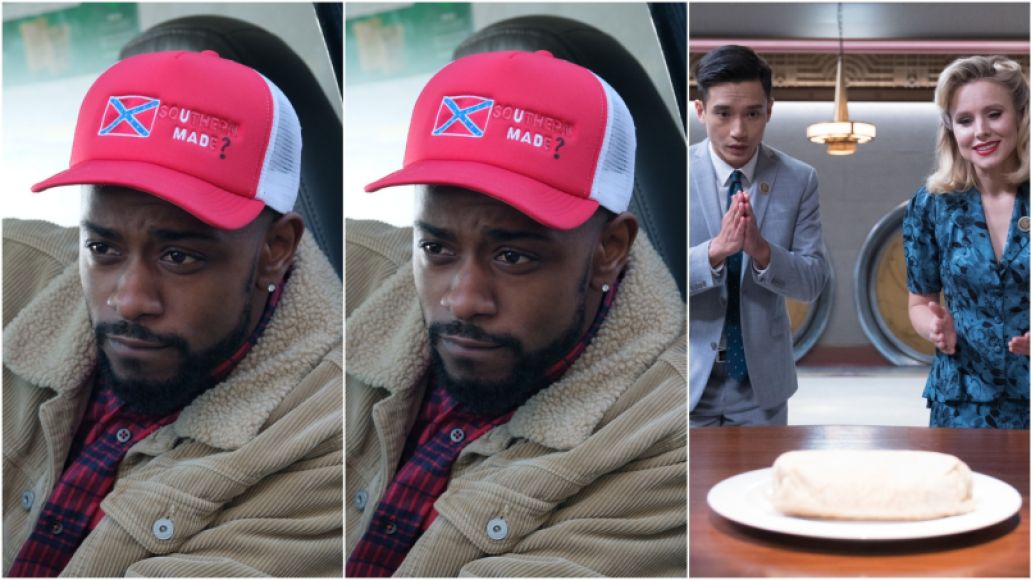 This year’s roster of comedy series noms is a pretty even spread between fantastic new shows (GLOW, Barry, The Marvelous Mrs. Maisel), solid programs hitting their middle years (Unbreakable Kimmy Schmidt, Silicon Valley) and some unremarkable establishment picks (Curb, Black-ish). But our vote (and the Emmy) should go to FX’s fantastic, transcendent Atlanta: Robbin’ Season ­– even apart from “Teddy Perkins,” it’s a dynamic season of television.

If we voted: Seriously? No The Good Place?! After that second season? Whatever, Emmys. We sentence you to read a stack of New Yorker magazines till the end of time. —Clint Worthington 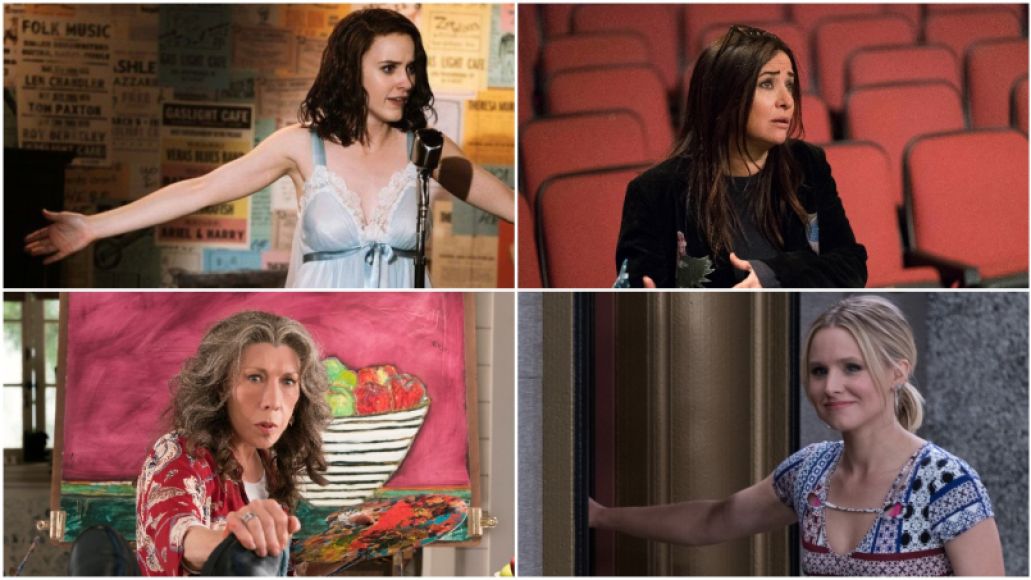 For an Emmys roster unuaually devoid of many of the familiar faces of recent years, here’s a category where mainstays are ruling the day, for the most part. What’s curious to us is that the pair of first-timers nominated are also our favorites to take home the award: Issa Rae and Rachel Brosnahan. The former continued to cement herself as a new household name with the second season of Insecure, but Brosnahan’s outstanding turn as a late-1950s housewife turned incendiary stand-up comedian was one of TV’s biggest breakouts of the past year, and it’ll be the one that takes home the prize.

If we voted: The Emmys’ lack of love for The Good Place is all-around frustrating this year, and Kristen Bell’s snub as Fake Eleanor is one of the more egregious omissions from this year’s entire list. Also: Rachel Bloom, Crazy Ex-Girlfriend; Justina Machado, One Day at a Time; Gina Rodriguez, Jane the Virgin. —Dominick Suzanne-Mayer 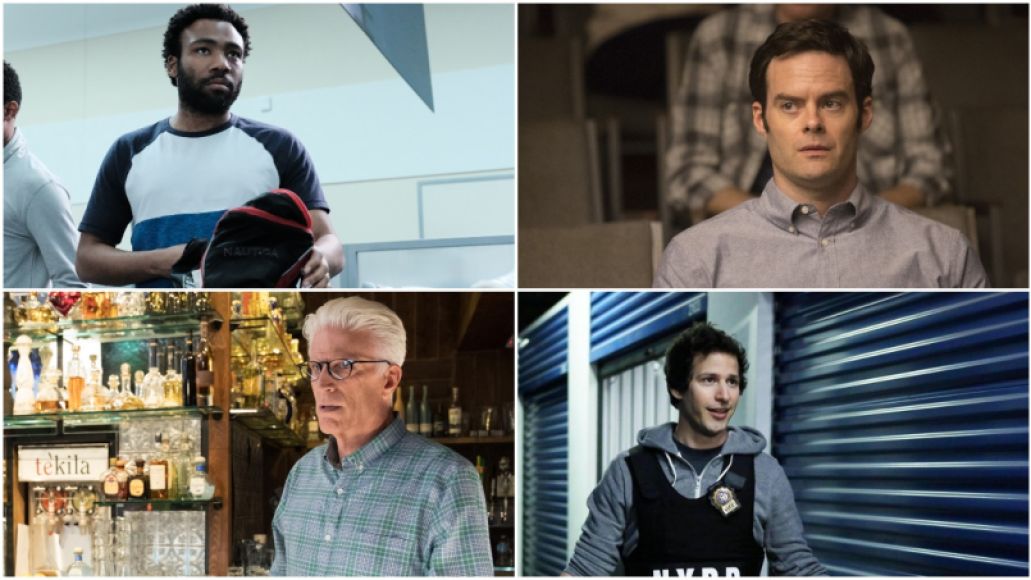 Who should win: Ted Danson, The Good Place or Bill Hader, Barry
Who will win: Donald Glover, Atlanta

Don’t get me wrong, Donald Glover is great on Atlanta. But Robbin’ Season centered way more on Alfred, to great success, and as good as Glover was in outings like “Teddy Perkins,” there are more interesting choices here. Our hearts are with legend Ted Danson, one of The Good Place’s disgustingly few nominees, but Bill Hader’s affecting turn in HBO’s Barry is also well worthy of recognition. Take your pick — and when Glover wins, that’ll be fine, too. 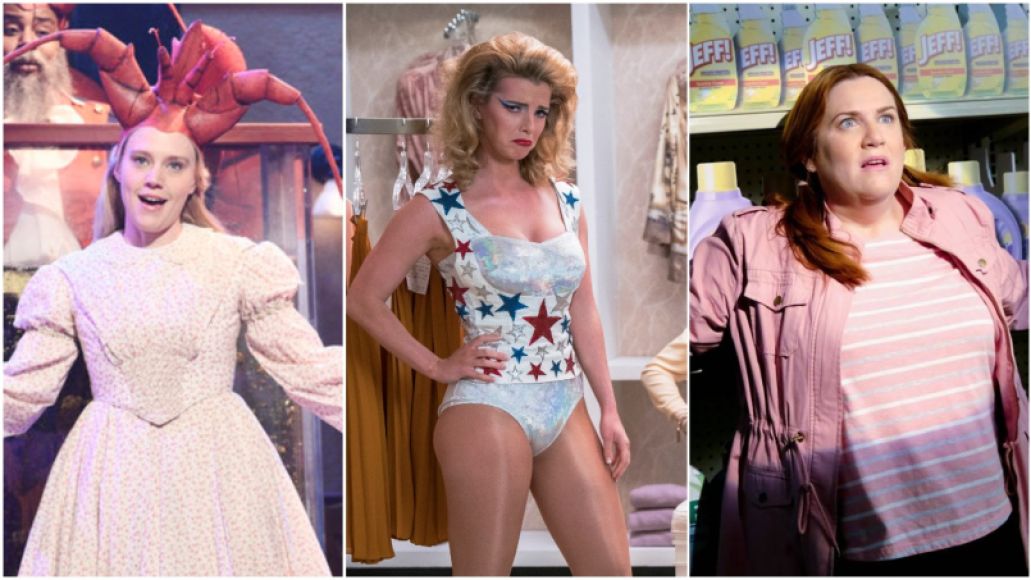 The eight (eight!) nominees in this category are all more or less deserving, and there’s a chance that Megan Mullally will add a third Emmy to the two she’s already won for playing Will & Grace’s Karen Walker. But the great Kate McKinnon has won this for two years running, and we’re betting she’ll make it three. That said, Betty Gilpin, GLOW’s secret weapon, would deserve a win, and who knows? She just might snag it. 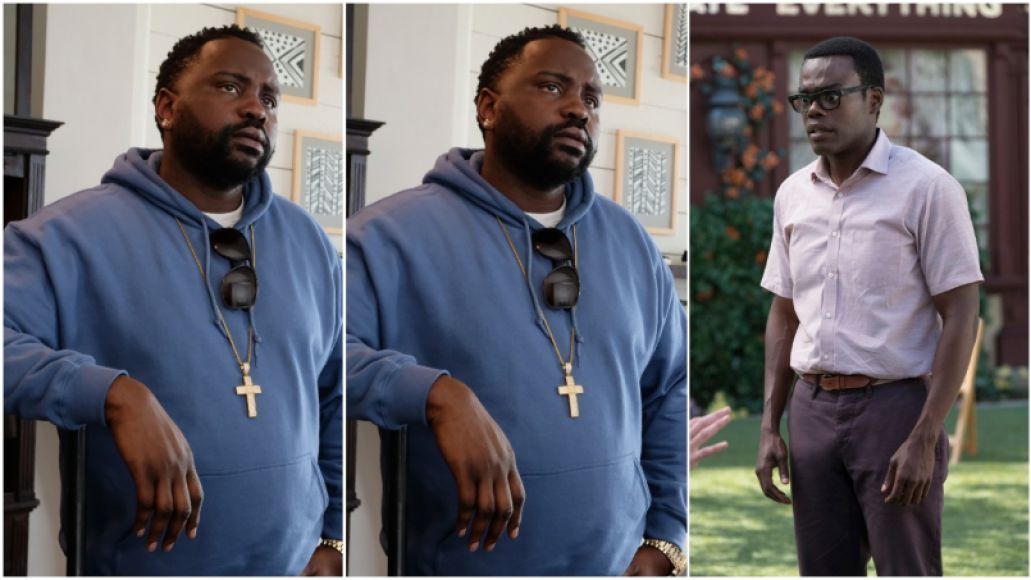 First things first: Shout-out to Kenan Thompson for earning his first-ever performance Emmy nomination in his 15th season on Saturday Night Live! He’s long been an underappreciated backbone of the show and it’s a delight to see him finally recognized for that—although in this case the nomination will likely serve as his award. There’s a chance Tony Shalhoub could solidify the “Shalhoubissance” by following up his recent Tony win with an Emmy win as well (and his fantastic work on The Marvelous Mrs. Maisel is definitely worth rewarding). But we’re giving the edge to Brian Tyree Henry for his subtle, nuanced (although, admittedly, rather uncomedic) turn on Atlanta. Henry’s work in Robbin’ Season — and particularly in the standout episode “Woods” — was both captivating and heart-wrenching. Whatever happens, we’re just hoping the Emmys don’t give another award to Alec Baldwin for his self-satisfied Donald Trump impression. 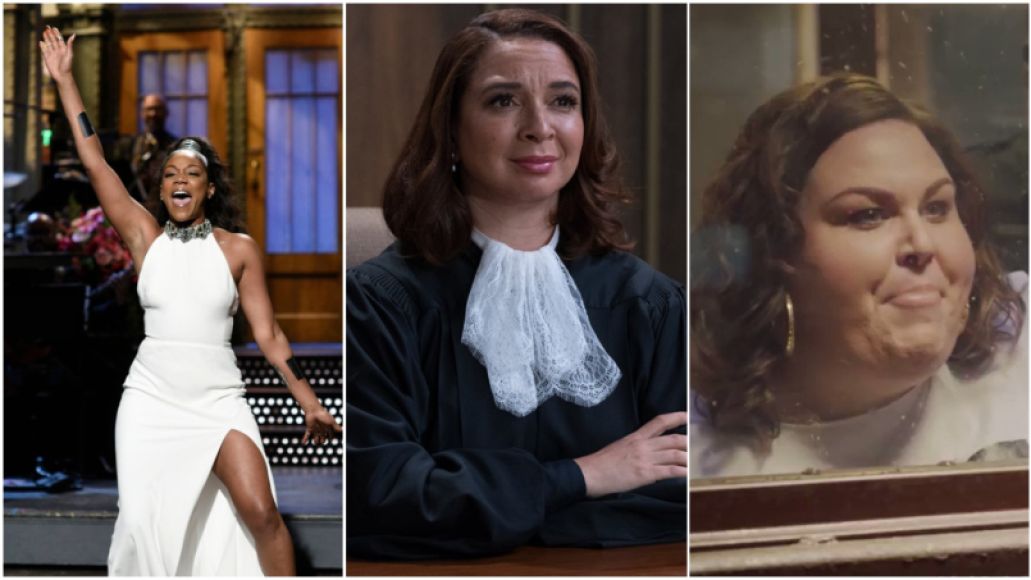 Who should win: Maya Rudolph, The Good Place
Who will win: Tiffany Haddish, Saturday Night Live

Tiffany Haddish did a great job hosting Saturday Night Live, and her fantastic opening monologue continues to pay dividends every time she shows up at events in that white Alexander McQueen, but her entertaining, game performance was let down by mediocre writing. Far more satisfying was Maya Rudolph as The Good Place’s much hyped Judge Gen, who swept in at the end of the season with guacamole to share and laughs to spare. 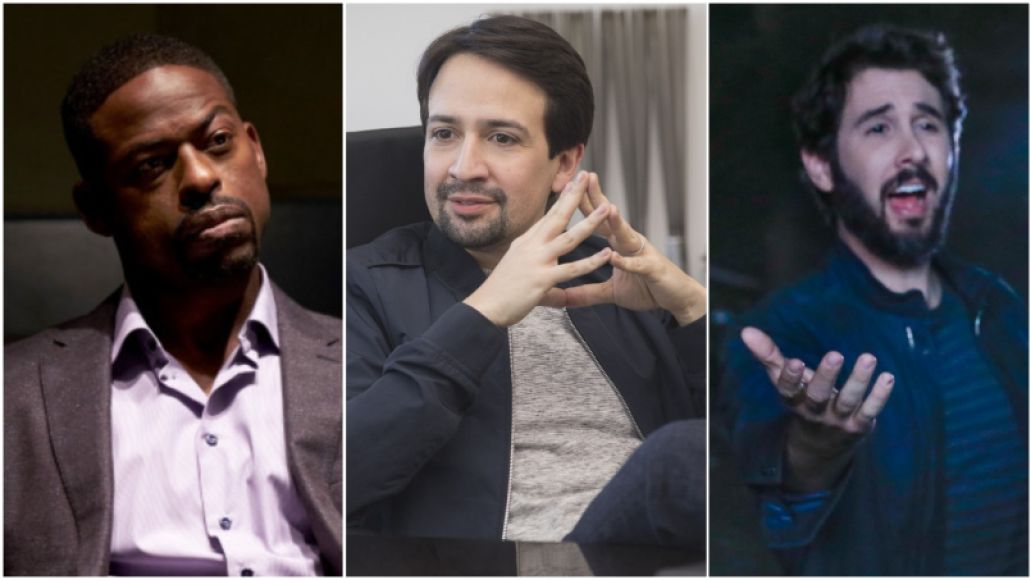 Who should win: Lin-Manuel Miranda, Curb Your Enthusiasm
Who will win: Sterling K. Brown, Brooklyn Nine-Nine

This is the Year of Our Lord Sterling K. Brown, He Who Can Do No Wrong. Even in his one-episode stint on “The Box,” Brooklyn Nine-Nine’s hilarious homage to Homicide: Life on the Street, he holds his own as a formidable opponent to Andre Braugher and Andy Samberg. We really won’t mind him winning this one, despite the generally impressive set of performances nominated here. 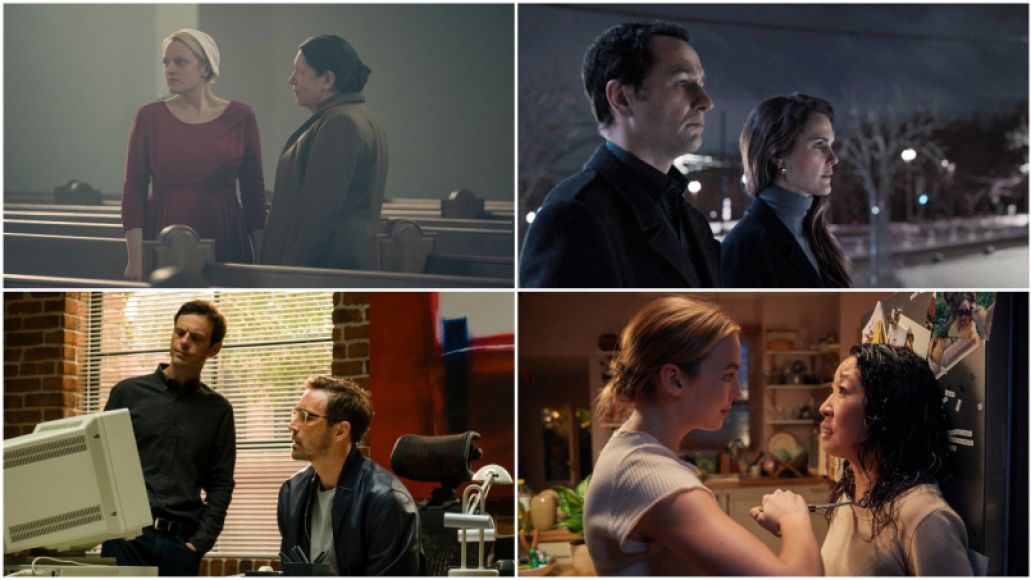 What should win: The Americans
What will win: The Handmaid’s Tale

The Handmaid’s Tale may be depressingly timely, but The Americans’ final season successfully paid off six seasons of buildup while giving its tremendous cast career-best material. Consistently heartbreaking and gripping, The Americans avoided the easy, violent end many predicted and went instead for a twist of the knife and a cold look at a foreign land. With one of the best finales and one of the best final seasons in recent TV, it may not have a prayer, but The Americans absolutely deserves to win.

Emmys: Who Will Win, Who Should Win, and Who Got Snubbed