The world of comedy owes a lot to Gilda Radner. One of the first, funniest cast members of the original Saturday Night Live, Gilda was an effervescent presence, an infectious comic personality with a penchant for bold characters (Roseanne Roseannadanna, “Baba Wawa”) and an unceasing desire to entertain. Her time on the proverbial stage was far too short – her catalog is mostly relegated to SNL, a short-lived one-woman show on Broadway, and a few films with her future husband Gene Wilder. Alongside though, her issues with cancer, eating disorders, and her insecurities about fame plagued her throughout her career.

Even so, her life was one of positivity, warmth, and an endless desire to live truthfully – issues that are explored in Lisa Dapolito’s new documentary Love, Gilda, a slight but refreshing reminder of the legacy left by one of the greatest women in comedy.

Much like The Zen Diaries of Garry Shandling, Love, Gilda frames the life and pain of a famous comedian around their letters and personal diaries – ones Radner wrote throughout a lifetime of comedy. (That’s fitting, since Gilda and Garry were contemporaries, and her post-remission appearance on It’s Garry Shandling’s Show is a real highlight late in the doc). From there, we’re given a deeper glimpse into the psychology of Radner’s comedy – growing up as a plus-size girl in suburban Detroit, falling in with the National Lampoon crew and their transition to the burgeoning Saturday Night Live, and her later marriage to Wilder and her subsequent cancer diagnosis. It’s an effective device in the same way it was in Zen Diaries, her words frequently shifting into mournful poetry about her self-worth that evince a philosopher’s mind. The film occasionally cuts to interviews with SNL successors like Amy Poehler, Maya Rudolph, and Bill Hader, all of whom are awestruck when presented with the letters. It’s a powerful feeling to see these comic luminaries in the presence of Gilda’s most personal thoughts.

And yet, as fascinating a figure as Radner was in life and remains in death, Love, Gilda frequently feels more interested in offering a clip-show retrospective of the comedienne than a more interesting dive into her psychology. Often, Radner’s career climb takes the form of a highlight reel of her best material, from National Lampoon to SNL and onward. Sure, her clownish physicality and impeccable timing still hold up, and it’s a breath of fresh air to revisit her considerable talents, but the movie frequently seems content to brush along the surface of Radner’s life without digging into it too deeply. Whether the result of the film’s brisk 90-minute runtime, or a lack of desire to investigate some of its subject’s greater desires and fears, Love, Gilda feels breezy to a fault.

Perhaps Dapolito knows her audience too well – after all, it’s quite comforting to sit back and enjoy old clips of Radner doing a silly voice, or screeching out complaints as Emily Litella (a character supposedly taken from the live-in housekeeper she formed a close relationship with in childhood). With her radiant smile and confident stage presence, it’s easy to want to inhabit Radner’s onstage world of love and light.

The doc’s attempts to probe deeper into her anxieties about fame, or her complicated relationship with her domineering mother, ultimately amount to a few passing remarks in her journal. Not nearly enough time is spent on her close friendship with John Belushi, and her proximity to such self-destructive stars, or the power dynamics of being a high-profile woman in comedy. Granted, this was apparently a low priority for Radner; she preferred to focus on the work and not ruffle feathers, instead striving to be funny enough to take the lead in sketches. Still, it feels like a missed opportunity to further recognize the path Radner carved out for other funny women like Poehler and Rudolph, even if it wasn’t an explicit goal of hers. Even the ebb and flow of her fight with cancer, delivered through home video footage of hospital visits and audiobook snippets of Radner’s memoir It’s Always Something, don’t sit with those difficult emotions as long as they arguably should.

Those reservations aside, Love, Gilda is an airy, accessible, entertaining doc about one of the most iconic figures in comedy – a beautiful soul who used her incredible powers of comedy to fight self-doubt, sexism, and terminal illness. It may not investigate its subject nearly as comprehensively as it could (or perhaps should), but as an amped-up ‘Best of Gilda’ montage, it’s entirely charming. There are undoubtedly dozens of layers to Gilda’s life and mind that Love, Gilda could have mined for incredible insight, but Dapolito seems content to let her audience sit back and remember the laughs. Maybe that’s what Radner would have wanted: to distract from the tragedy of life with a goofy character or a witty punchline. As a continuation of that ethos, Love, Gilda succeeds mightily. 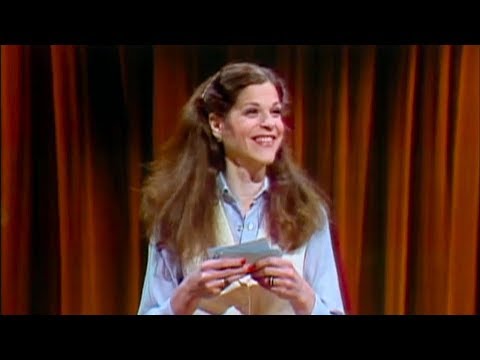