Beyond the Gates: America’s summer music festival circuit is in a slump. Despite Beyoncé’s for-the-ages Coachella live stream earlier this year, the bloom is clearly off the rose. By-the-numbers lineups that grow wearily family by the time September comes around. Fans pretty much know what to expect when heading off to Outside Lands, Lollapalooza, and the rest of the big-name fests that have become household names in recent years.

Only in its fourth year, KAABOO’s lineup is a masterclass in catering to the many as well as the few. Headliners Foo Fighters, Imagine Dragons, and Katy Perry guaranteed a strong core of mainstream rock and pop fans would be willing to plunk good money down to attend. From true O.G. lowriding legends War to Afro-Futurist pioneers Earth, Wind and Fire to the one of the great all-American heartland rock stars in Melissa Etheridge, this year’s lineup shone a spotlight on the kinds of artists that might not make the cut for other Southern California music fests, but appeal to a deceptively large audience. KAABOO Del Mar is also a clear reflection of the laid back, beach town vibes that permeate the city and neighboring Carlsbad and San Diego. Seeing anyone rushing towards a stage—or anywhere, for that matter—was rare. As an Uber driver described it: “This area down here around San Diego and Carlsbad, is like L.A.’s slow Southern cousin. People take their time.”

It makes for a warm, comfortable event that feels inclusive to pretty much anyone in attendance. Which makes sense, considering the drastic age range represented across all three days. Chatting with a KAABOO Del Mar business exec while waiting for Robert Plant, I learned that the average of the festival’s attendees is 37—a good decade and a half higher than most shows of its ilk. You’re just as likely to post up next to people your parent’s age and even your grandparents age at any given moment over the weekend. 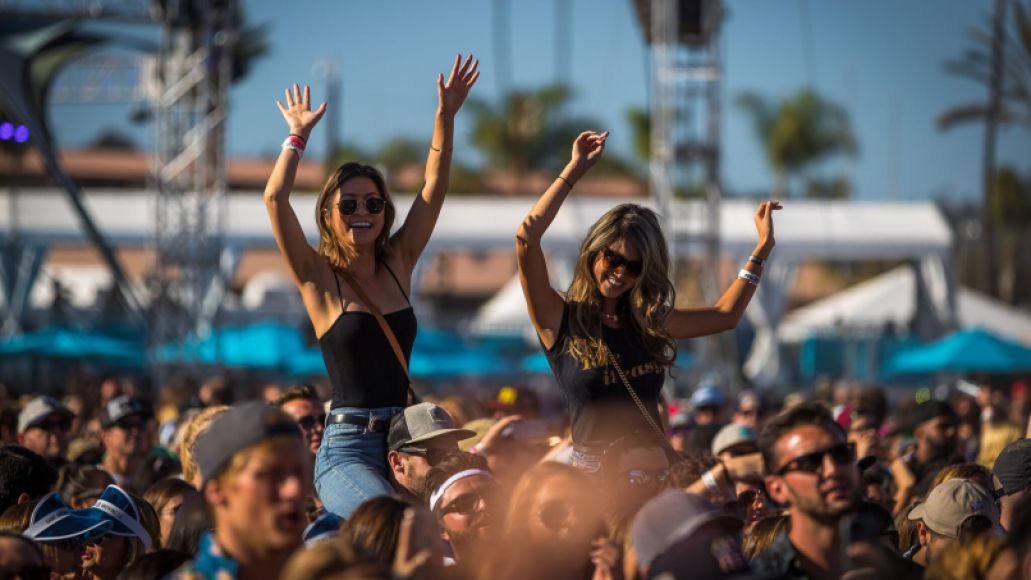 Best Bites: KAABOO Del Mar went to great pains to ensure that hungry fans had a serious variety of culinary options. From the robust Palate “culinary environment” featuring name chefs to festival pizza icons Spicy Pie, all sorts of delicious sights and smells permeated the Del Mar Racetrack and Fairgrounds. The alcohol presentation, however, was even more impressive, bordering on overwhelming. Booze was everywhere, and being enjoyed to the fullest. Still, KAABOO Del Mar remained as chill and inviting as ever, never picking up that hostile edge that can creep over a festival grounds as night arrives. It’s all good, brah. 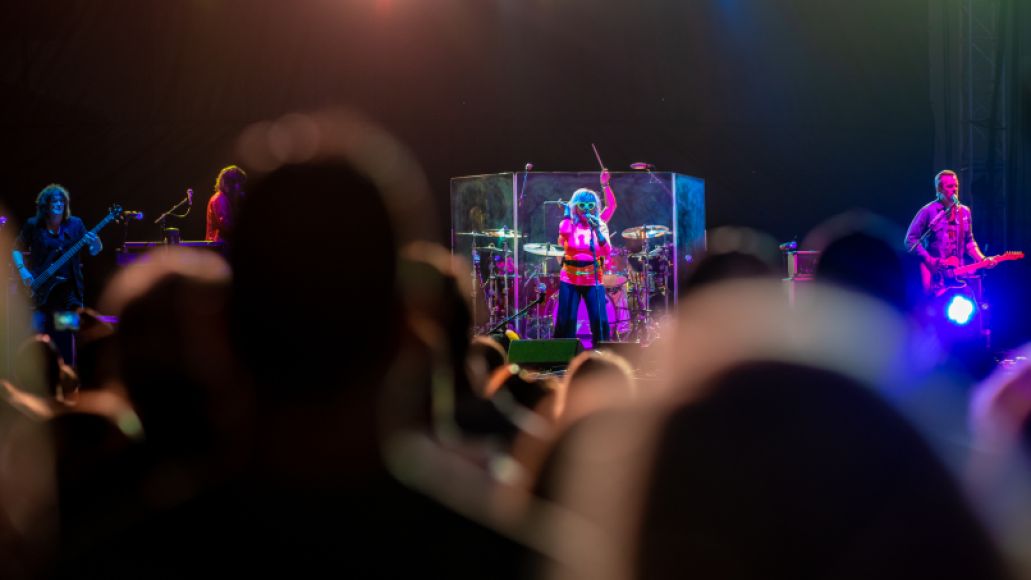 Festival Fashionista: No contest: Debbie Harry of Blondie. Rocking classic neon sunglasses with matching shoes and a sweeping cape/jacket emblazoned with “Stop Fucking the Planet” across the back, the 73-year-old Harry worked the stage like it was 1979 on Solid Gold. A steady parade of the band’s hits were peppered with new material co-written by the likes of Charli XCX and Dev Hynes. It was the Hynes composition—”Long Time,” from Blondie’s most recent album, Pollinator—that generated such a response that Harry paused to salute the crowd for its enthusiasm for a song most in attendance didn’t know. The only downside to Blondie’s set was the absence of original member Chris Stein. Harry acknowledged his absence towards the end of the show, dedicated the last two songs—”Heart of Glass” and “Dreaming”—to him. 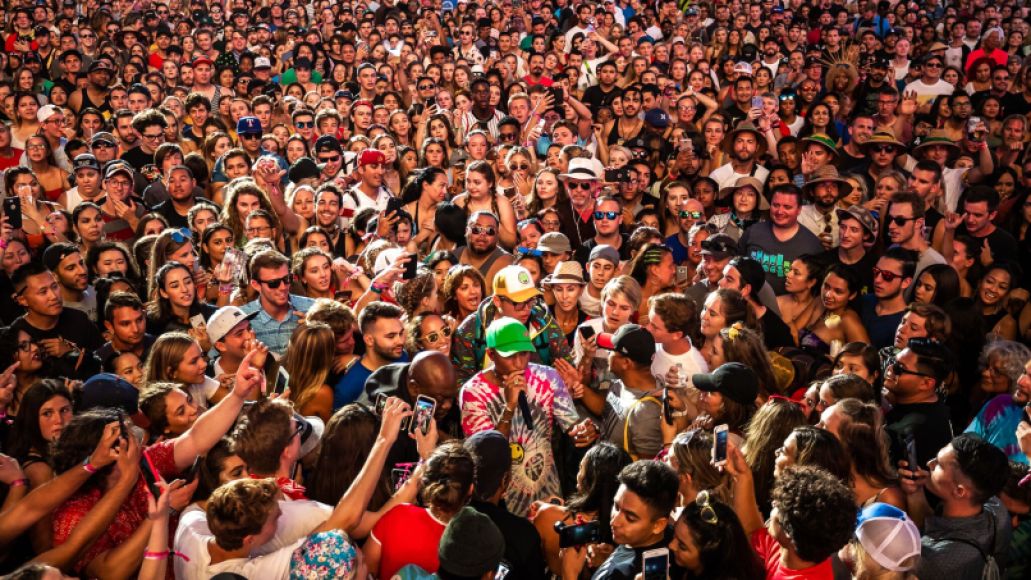 Fancy Crowdwork: Pharrell Williams and N*E*R*D are a very different entity than they were when they debuted 17(!) years ago with In Search of… Inching ever closer to twisted hip-hop version of Rage Against the Machine, the band’s set was all big slogans (“Have Hope”), stark political observations, and hardcore dance routines. Noticing that the general admission area in front of the stage was packed to an extreme, Williams implored the crowd to make some room and create a pit. As his pleas went ignored, he finally hopped down into the crowd, wading deep into the audience with his bodyguard always less an arm’s length away. Begging fans to put down their phones and engage with the moment, his manic energy made the uber-producer seem refreshingly human. Fellow Neptune Chad Hugo is back in the mix, too, keeping a low profile behind a bank of keyboards.

Right Time, Wrong Place: Considering the myriad things to see and experience throughout the festival (like the gang of Freddie Mercury lookalikes roaming the premises promoting upcoming Queen movie, Bohemian Rhapsody), the one that that was glaringly absent was charging stations. If they were around, I certainly never found them, a sentiment repeated by many concertgoers. As phones drained throughout the warm summer days, juicing up devices became a mission for many. No open outlet in the vicinity was spared. 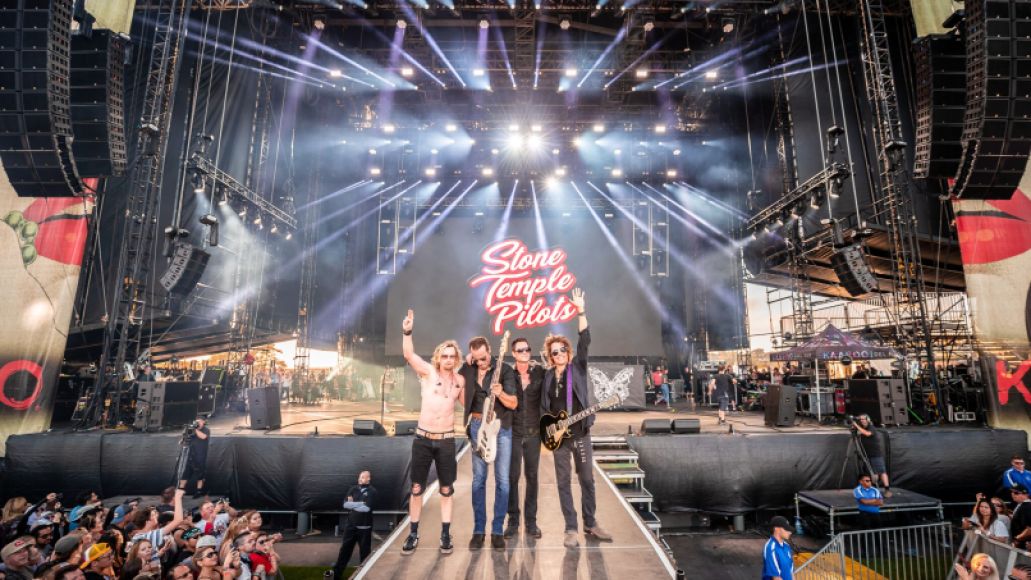 Rookie vs. MVP: This is an especially interesting juxtaposition, as it involves two veteran grunge bands from the ‘90s. On Saturday, Stone Temple Pilots hit the Rolling Stone stage with new singer Jeff Gutt, who only just joined the fold late last year after the tragic death of Chester Bennington. As STP roared through those indelible radio hits like “Interstate Love Song” and “Big Bang Baby,” it was clear that Gutt is still getting his legs leading the group. He handled the vocals admirably, conjuring the spirit and of the songs, fitting in well with the crack band behind him, who sounded fantastic. Gutt did have a tendency to mimic Scott Weiland’s most recognizable moves, which plays well on the big screen, but doesn’t do much to help him stamp his own identity onto the music. Which will likely come with time. 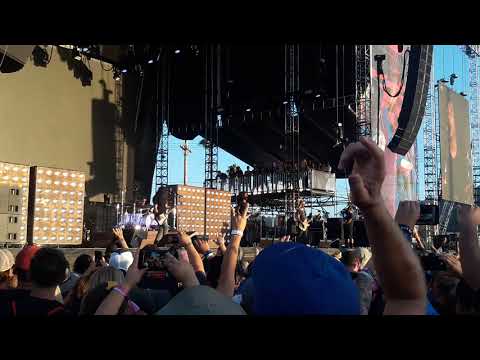 Which brings us to Alice in Chains, who scored the plum spot of opening for Led Zeppelin legend Robert Plant on Sunday night. William Duvall has been leading Alice in Chains since 2006, and he wears it very well. Beyond just a powerful voice that slices through the dense, down-tuned riffs that power Alice’s biggest hits, his stage presence is big and confident enough that he’s got it down to grand, sweeping gestures that resonate deep into the back of the massive crowd, one of the biggest turnouts of the weekend. It’s easy to imagine Jeff Gutt someday leading STP in similar fashion, and he’s already off to a strong start. 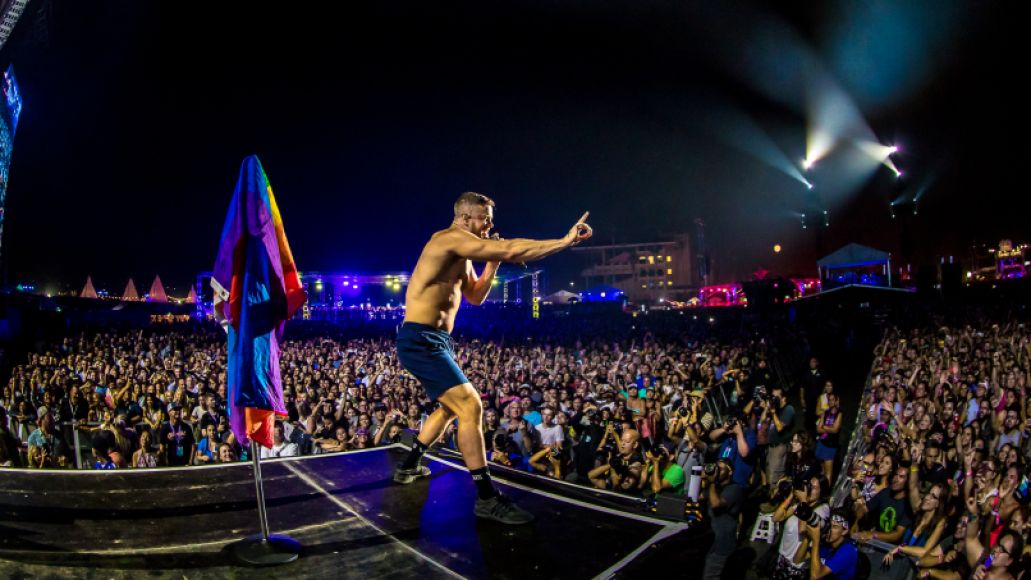 Rock’s Not Dead, It’s Coming for Your Little Brothers and Sisters: While critical types wring hands and debate the health and state of rock and roll in 2018, the kids are just out soaking it all in. Take Imagine Dragons, who have an appeal that’s oddly similar to KISS at their mid-’70s peak. For one, children love them. The number of kids not yet high school age screaming along to “Radioactive” while their parents stood behind them at a respectful distance was impressive. Their big, anthemic songs all share an uplifting and life-affirming quality, which makes their appeal to younger generations even more important. 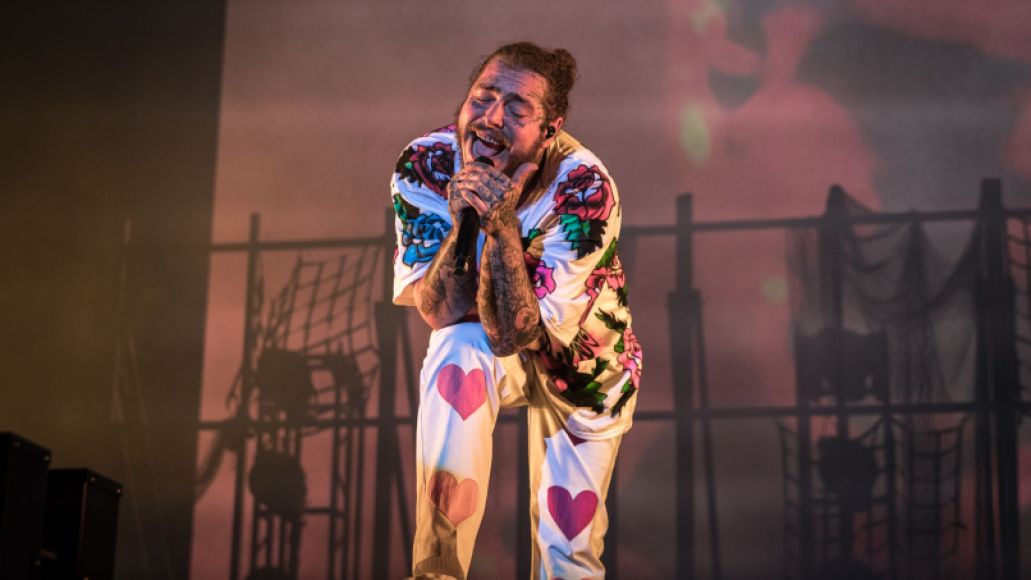 Feel the Feelings: If there is one thing that unites the current crop of young pop stars, it’s all of the feelings. Deep, contemplative emotions were what drove big-stage performances from both Halsey and the people’s champion, Post Malone. His world-weary rap persona of just wanting to chill out, left alone and get high speaks to an entire generation of disaffected youth, pulling a giant crowd that hung on his entire performance, which was just him onstage, lamenting the haters and wondering why are the cool kids so mean? It’s wild to watch in real times, and how he evolves going forward will be fascinating. He knows they’re listening intently. 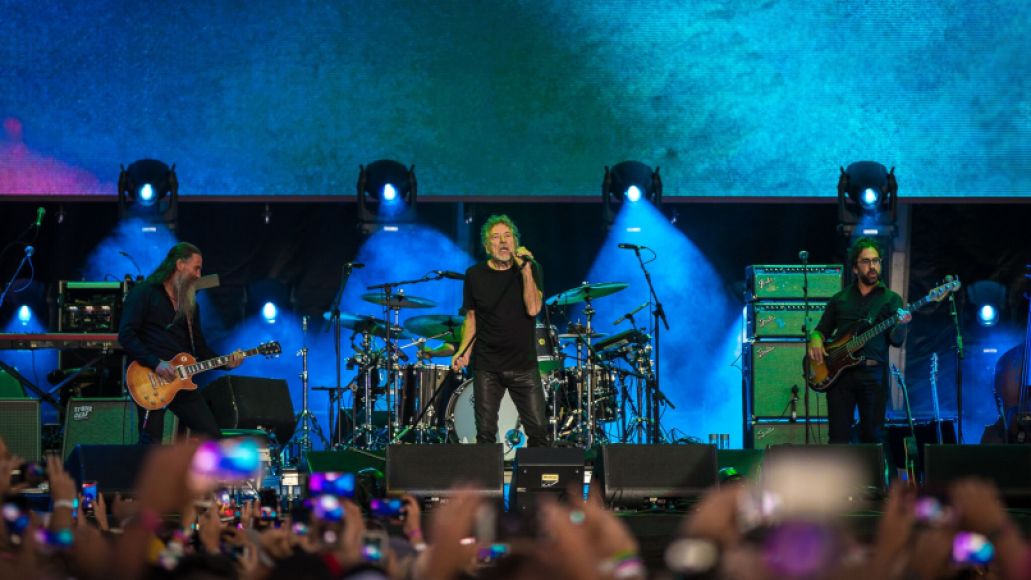 That One Performance: Robert Plant. It was obvious from the moment one hit the Fairgrounds on Sunday that Plant’s performance was the most anticipated of the day (which is saying a lot, considering both Wiz Khalifa and Katy Perry were up as well). An arraying of Led Zeppelin and Plant t-shirts blanketed the grounds, with many of the fans heading towards the show old enough to have seen Zeppelin the first time around. Plant stormed the stage with a purpose, opening with a faithful run through “Good Times, Bad Times” that hit like a lightning bolt. He paced the show well, dropping in classics like “Going to California” and “Whole Lotta Love” among the new tunes and a devastating take on Leadbelly’s “Gallow’s Pole”. Coming Home: Rolling out of the Del Mar Fairgrounds on Sunday night as Katy Perry’s extreme pop spectacle entertained the masses, it’s hard not to love KAABOO Del Mar. With a no-nonsense booking policy that can draw the proverbial you, your parents and some aunts and uncles, too, they’ve erased that undercurrent of youth-gone-wild that permeates so many of America’ biggest festivals. KAABOO Del Mar caters to the locals, and does it so well that it draws music fans from around the world.

Outside of the festival, nearby Carlsbad Village offers the best of beach city life, with an idyllic beachfront and plenty to see and do. As the festival expands to KAABOO Cayman Islands and KAABOO Texas in Arlington’s Cowboy Stadium, there is a new contender in the music festival sweepstakes. This felt like a tipping point year, where the world about KAABOO Del Mar is finally starting to connect with that certain festival demographic that has yet to make the journey down San Diego way. But you can feel it in the air. They’re coming. Soon.