Synecdoche, New York is one of those movies so singular and strange that its very existence feels like a little bit of a miracle. Ten years ago, Charlie Kaufman was the acclaimed screenwriter of Being John Malkovich, Adaptation, and Eternal Sunshine of the Spotless Mind, poised to make his directorial debut with an ambitious feature about a theatre director who attempts to re-enact the human experience and passage of time as a living performance piece. What followed was a movie so unrelenting in its existential despair that, by all accounts of the modern film industry, it shouldn’t exist at all.

And yet, it does. A decade removed, Synecdoche, New York is still very much one of those movies that the cinephile in your life has strong opinions around, and most of the people you know have probably never even heard about. In part, that’s because of the strangely muted release it received at the time; even by the standards of limited arthouse releases, the film didn’t last especially long in theaters. Despite being championed vocally by many critics, particularly by Roger Ebert in an especially wonderful review, word quickly spread that this was dense stuff even by Kaufman’s usually labyrinthe standards. Beyond that, many would say, it’s depressing as fuck.

That assessment is hardly wrong, but to invoke Ebert once more, “no good movie is depressing.” Synecdoche, New York is as wrenching a movie as one can ever watch, but there’s something exhilarating about its endlessly expanding ambition. From the beginning, Caden Cotard (the late Philip Seymour Hoffman, in one of his finest performances) is clearly unwell, in a few different respects. He spends most of his time worrying either about his plays (as the film begins, he’s staging Death of a Salesman with young actors and hundreds of lighting cues) or about his declining health. In one of the film’s several unsettling motifs, something in Caden is always breaking down, whether in the form of seizures, pustules all over his face, an inability to salivate, or another malady. Even as he obsessively navel-gazes about his art and himself, his wife and fellow artist Adele (Catherine Keener) disinterestedly passing him by all the while, he’s constantly hurtling toward death. As Caden realizes, in the way only some people do in the world, we all are. He’s just more aware of it, on a more constant basis, than most.

Adele is just the first significant love to pass through Caden’s life, even if Hoffman’s mumbling neuroses and Keener’s caustic passive-aggression in the early minutes hardly paint a portrait of a stable relationship. At his theatre, he carries a casual flirtation with Hazel (Samantha Morton), who’s as interested in Caden as someone can be and lives in a house that’s always on fire. His lead in Death of a Salesman, Claire (Michelle Williams), is obsessed with his artistic skill and insight. Later, he casts Tammy (Emily Watson) as Hazel in his piece, and they form their own attachment. In every case, Caden latches onto them because he’s full of a longing he’s unable to articulate, desperate for each to be the woman who can make sense of it all for him. In every case, they ultimately pull away when they realize that this is all Caden will ever be capable of doing for the whole of his life.

All of this and so much more, the lives and loves and surrealist comic interludes and dramaturgical in-jokes, populate the boundary-free world of Kaufman’s masterwork. It’s truly rare to see a film like this, one which convinces the viewer that it’s capable of going anywhere at any moment, and then rewards that investment in ways that resonate well beyond the film. Kaufman’s film is about the impossibility of capturing all of life in a single piece of art, even as Caden attempts to do it in his performance and Kaufman attempts the same in just two hours’ time. “Time” as a concept is central to the way Synecdoche goes about doing this, as Kaufman collapses and expands days, months, and eventually years and even decades into malleable minutes of screen time, disorienting interludes that swing by in a flash. Children age into their teens in minutes, entire lives come and go in the background of various scenes, and by the film’s breathtaking final minutes, Caden has become the merciless god of his own self-serving creation, building a nesting doll of art within art in hopes of finding a truth that wouldn’t be capable of satisfying him if he even did wind up landing on it.

To try and unpack the film in the space of a thousand-word review is futility, and in a way, Synecdoche, New York is as much about how we’ll never truly understand anything in our time on Earth as it is art or creation or anything else. The purposeful delirium of the filmmaking is matched by so many fine story details: the way that Sammy (Tom Noonan), the man who eventually comes to portray Caden in his own play, is following him long before he becomes an active player in the story; Hazel’s infinitely burning house; the manner in which even some of Caden’s most profound life experiences become components of the play, to the point where the line between “reality” and Caden’s art becomes irrelevant. In trying to use art to discipline and harness the chaos of being alive, Caden ultimately does nothing but watch life pass him by.

Synecdoche, New York would still be overwhelming if it were just a piece of thickly plotted nihilism about how artists often tend to subsume and destroy everything and everyone in their orbit. But because it’s in every way a Charlie Kaufman film, there are moments of shattering affection and need that justify the film’s entire existence. Near its end, when so much of the film has spiraled out of Caden’s view, he and Hazel looking far older than they once did, he’s finally able to look her in the eye and tell her that “I breathe your name in every exhalation.” By then, it doesn’t matter. They’ve aged. Their time came and went, leaving them passing ships in the night. Soon, they’ll both be gone. And yet, for one more night they share a bed, because that’s why people write and direct and paint and sculpt and film and play and sing and act. They’re chasing the kind of peace only afforded to us intermittently in life, the kind that comes from other people. The kind that can’t be held in stasis forever. The kind that eventually comes and goes, because of age or death or because people just change. Kaufman holds these ideas against some of his most despairing, and in this way, Synecdoche becomes something like what Caden spends the whole film chasing. It’s a piece about disease and agony and abandonment and love and hope and serenity and remorse and forgiveness and failure.

Caden never really does figure out how to do the play, despite flailing half-heartedly in that direction for so much of the film. Then again, Caden’s play is really just a logline, a way to explain in less than a pile of long-winded paragraphs what Synecdoche, New York is all about. I watched Kaufman speak on this film shortly before its release, and he mentioned that it was meant to be felt, rather than understood. That’s the thing about the film: it hits on the bone-deep level. It validates the worst fears of creative types, even as it understands well that giving in to those fears is a waste of one’s life. It offers a terrifying vision of what happens when a person disappears so far into themselves that they forget to live. It understands, in ways few films ever have, the emotional burden of being desperate for love while incapable of accepting or returning it. And it ends in the only way it can, and the only way it ever does. 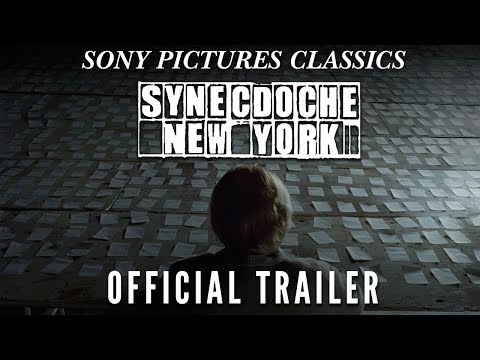