Track by Track is a recurring new music feature that asks an artist to look deeply at each song from their latest record one by one.

It takes a bit of boldness and a good amount of risk to throw yourself into starting a band, and Parcels took on both at a very young age. Fresh out of high school, the five bandmates uprooted their lives in Byron Bay, Australia and relocated to Berlin, Germany. They may have been naive, but their gambit paid off; it wasn’t long before their genre-blending funk pop scored them a deal with French indie label Kitsune and a collaboration with the kings of modern disco, Daft Punk. Two EPs later, they’ve finally delivered their self-titled debut full-length

Parcels takes listeners on an aural journey that is equal parts nostalgic and fresh. There are clearly nods to icons like Chic (“Tieduprightnow”), Tropicana swing (“Exotica”), and yacht rock pleasures like Steely Dan (“Lightenup”). Presented as it is in the warm beds of carefully crafted production, though, it rings out as “meaningful pop music,” as the band themselves puts it.

“Disregarding the modern taboo of the word, pop music for us is something which really makes you feel. It’s pure emotion,” the band explains in a press release. “We’re coming at this from a vaguely musical background and with varied influences, but in the end we’re just trying to unlock the raw feeling of each track. Something that everybody can feel.”

Take a listen to Parcels below and feel it for yourself.

For more on the sounds of Parcels, the Berlin-based outfit has taken us through each song on the album Track by Track.

“Comedown”:
It now feels very fitting that we chose to open our debut album with one of the earliest Parcels songs ever written. We have played it live at almost every show since the band started in 2014. We didn’t even think to record “Comedown” for the album until about halfway through the recording process because it felt so old, but when we looked back we realized how important this song was to us. It’s based entirely around a vinyl sampled drum loop straight out of Peter Gun from the Blues Brothers soundtrack. Rowan Hamwood jumped in on flute for this one!

“Lightenup”:
“Lightenup” is our take on one of those classic and classy disco records you can’t quite remember the artist name of. It was fleshed out during the album’s recording process and morphed directly out of an over-the-top live jam we had been finishing our sets with for ages, serving as the outro for “Comedown”. We tidied it up with some super clean Benson inspired guitars and a truly bouncy bass line from our beloved Crumar Multiman. It feels like the most communal track on the album as we are all singing together the entire time, truly a sentiment from the band’s collective perspective. The lyrics took a while to work out – we had placeholder ones until an embarrassingly late stage – but one night Patrick sent an almost complete idea around that everyone loved immediately and so that’s what we used. Rowan Hamwood returns for a lovely flute solo in the outro.

“Withorwithout”:
This one started as one of Jules’ bedroom demos, a classic heartbreak song of angst and regret. From the start the melody struck us as a powerful and haunting mood, but the song took some time to unlock. We recorded and rerecorded it multiple times before finally finding the sound and structure that it needed, in the end even incorporating some of Jules’ original nylon guitar tracks that he had played into his MacBook microphone over a year ago. The bridge features a howling synth solo from Patrick in the tardy hours of an inspired night session on our favourite new toy, the Sequential Circuits Prophet V.

“Tape In Our Minds”:
“Tape” is a surf rock inspired electronic pop song about self affirmation. However, it took on many different forms as the early demo was adapted for the album and, looking back, the surf rock aspect definitely became more abstract with each revision. Strangely, what remained in the final version is a very old live recording we once did of a Minimoog noise filter that we thought sounded exactly like crashing waves. The title comes from a lyric in the verse and is also fitting as all the vocals on the album are recorded straight onto an iconic tape machine which was collecting dust in the studio. We left its characteristic hiss on the chorus vocals as an audio stamp of sorts. The song also features a baroque inspired flute line (performed once again by Rowan Hamwood) played in unison with a humungous old Wurlitzer organ from the studio which, when fired up, sounded like a truck. This was a very fun session but also I think the start of our decline into insanity. “Tape”‘s outro then guides the album into slightly more progressive territory in anticipation of “Everyroad”.

“Everyroad”:
This track began as an experiment in progressive disco developed from a jam in our rehearsal room. When we first started to dream up the album we hung out in our rehearsal room for a few weeks and just tried things. This was the first time, after a chaotic year of touring a structured set, that we’d just let loose and jammed. Thus we found ourselves following loads of different paths and ending up with an eight minute monster. Over the next year this got more and more out of hand. We tried hundreds of things, we rerecorded everything, we lost files, the computer couldn’t run logic – our recording software – anymore because there were simply too many audio tracks. The voices heard are selections from interviews conducted with three unique characters found in Berlin at different stages of their lives and together they form one longing voice for a place they’re not entirely sure exists.

So this song truly became the greatest production journey of them all. We really enjoyed recording strings by Kaio Morius and choir vocals by Flore Benguigui on this track. Shout out to our engineer Lucky Boi (Martin Waschkowitsch) for jumping on the congas for this track!

“Yourfault”:
“Yourfault” leads the listener to an undiscovered beach in Vanuatu for an emotional reflection on past losses. It’s the designated ballad of the album and demonstrates our appreciation for tropical percussion as well as a sort of daydreamy coda wherein we re-imagine ourselves as a reggae band. It was a big tick on the bucket list recording some classic 60’s inspired vibraphone for this. Played by Lucas Dorado. 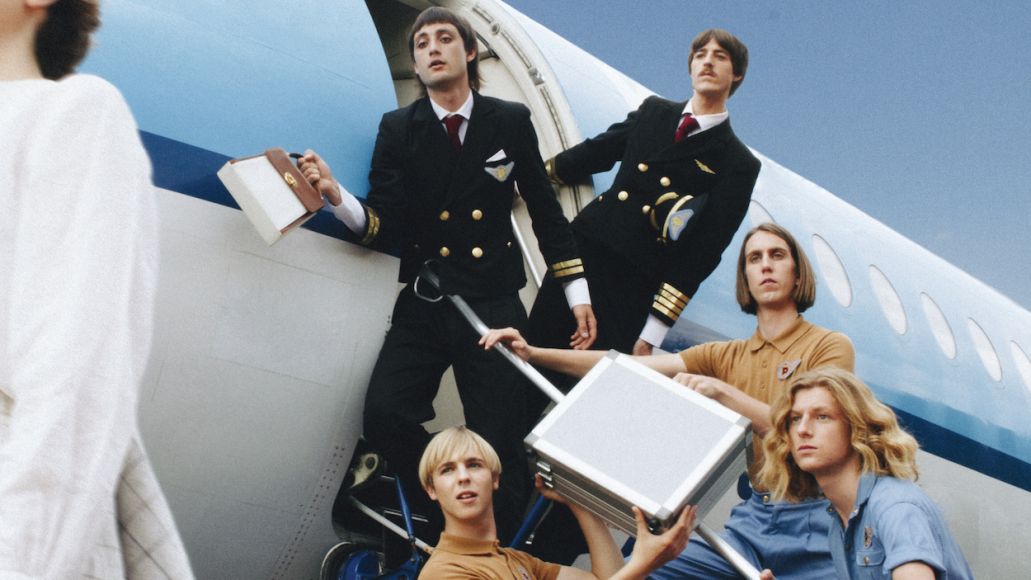 “Closetowhy”
“Closetowhy” came from a years old demo which resurfaced towards the end of the album writing process. It was written in a studio and developed from a live intro we played at festivals. Patrick wrote the lyrics one sleepless night. The demo was from a period when we were using lots of laid back nylon guitars for recording which we decided to keep and work with. The breezy feeling these guitars gave inspired us to pursue this shared fantasy we had of a sort of electronic Californian soundscape. One of us, I can’t remember who, had this idea of trying to transition a live funk groove into a rigid, quantized replica of itself made entirely of synths using just a crossfade. This idea was utilized in “Closetowhy”‘s outro underneath a shameless West Coast inspired synth line.

“IknowhowIfeel”:
This driving, minimalist jam was one of the last written and first recorded for the album. There was sort of an expectation to develop the lyrical aspect into more of a traditional pop verse but we found it more exciting to try to progress the sections instead with the movement of the live Rhodes and widening vocal effects. This allowed us to treat Jules’ vocal almost like a house sample — although it’s sung live -= repeating over and over before releasing into the more lyrical chorus.

“Exotica”:
A love song. It’s predominantly a mix of two big influences, the intro and pre-choruses being a nod to the genre Exotica and the verses and choruses to classic ’70s pop music. We re-sampled and chopped in the Exotica sections in as if they were sampled from a very old lo-fi recording, allowing the song to open up into a bright and studio-fresh groove. These two sections were our guiding forces throughout recording but the song was really about capturing the emotion in Jules’ voice and lyrics with such a personal message. Kaio Morius and Rowan Hamwood provide luscious strings and flute respectively for that dreamy chorus sound.

“Tieduprightnow”:
We recorded “Tieduprightnow” in a Berlin studio, we had just lived out six months of German winter without even a hint of sun. But during this session it was the start of spring and the first rays began to peak through our window. The video is a homage to our roots. We all liked the idea of playing with the Australian stereotype, how the world views Australia and how we fit into that. We drive through our original hometown Byron Bay, the quintessential Australian surf paradise, and observe what it means to be Australian.“

Director Beatrice Pegard also comments on the video: “Northern NSW and Byron Bay are coastal areas that are currently being destroyed by profit-motivated policies and lobbies, and where marine life and ecosystems are disappearing at an alarming rate. The Australian lifestyle as weknow it, the joys of summer, of surfing and living by the beach would not be much without its marine ecosystem and wildlife.”

“Bemyself”:
“Bemyself” was the very first track we recorded together at Mesanic studios. We were all very excited to start the record with this song, as it felt right to dive into a song that really had meaning for us all lyrically; it’s the message you want to tell yourself when recording your first album! The song started with a strong concept. To show our listeners a clear divide of the type of music we like to collide, being old and new. The song was to be split down the middle, starting with the “old self,” speaking of the past, with the sound of classic ’60s pop. Then, abruptly transforming into something new age to go with the tone of a new confident self.
We tried recording the ‘new age’ second part twice; It never worked out.. The second half, very last minute, turned into “Credits feat. Dean Dawson” and would become the last thing we recorded. Exactly 1 year later, making it the beginning and ending of recording process for the album. It made sense to us to have “Bemyself” as the last song of the album.

“Credits”:
Dean Dawson was almost always by our side throughout the recording of this album. This mysterious figure worked across the hall from the studio we recorded in and every day he was out in the shared kitchen with ridiculously high spirits and enthusiasm for life. God bless. It only felt right to have him narrate as we said thank you to all the people who have contributed to the Parcels journey so far.