Well, Hank Azaria will have one less character to voice on The Simpsons: The series is reportedly cutting out Apu Nahasapeemapetilon from any future episodes following mounting controversy over its racial stereotyping, especially following Hari Kondabolu’s 2017 documentary The Problem with Apu.

The news comes from an IndieWire interview with producer Adi Shankar, who spearheaded a campaign earlier this year attempting to solve the show’s “Apu Problem” by crowdsourcing a script that he hoped Fox would produce.

That hope was for naught, however, as Shankar now reports that, “I’ve verified from multiple sources now: They’re going to drop the Apu character altogether. They aren’t going to make a big deal out of it, or anything like that, but they’ll drop him altogether just to avoid the controversy.”

Shankar says his sources include two people who work for the series and another who works directly with creator Matt Groening. IndieWire also reached out to Fox, who cryptially responded, writing, “Apu appeared in the 10/14/18 episode ‘My Way or the Highway to Heaven,'” which is incredibly suspicious given that Apu only appears in a single shot with characters gathered around God (see below).

Update – October 29th: The Simpsons executive producer Al Jean said in a tweet: “Adi Shankar is not a producer of The Simpsons. I wish him the best but he does not speak for our show.” Jean did not, however, clarify whether Apu had indeed been written out of the show.

Adi Shankar is not a producer on the Simpsons. I wish him the very best but he does not speak for our show. 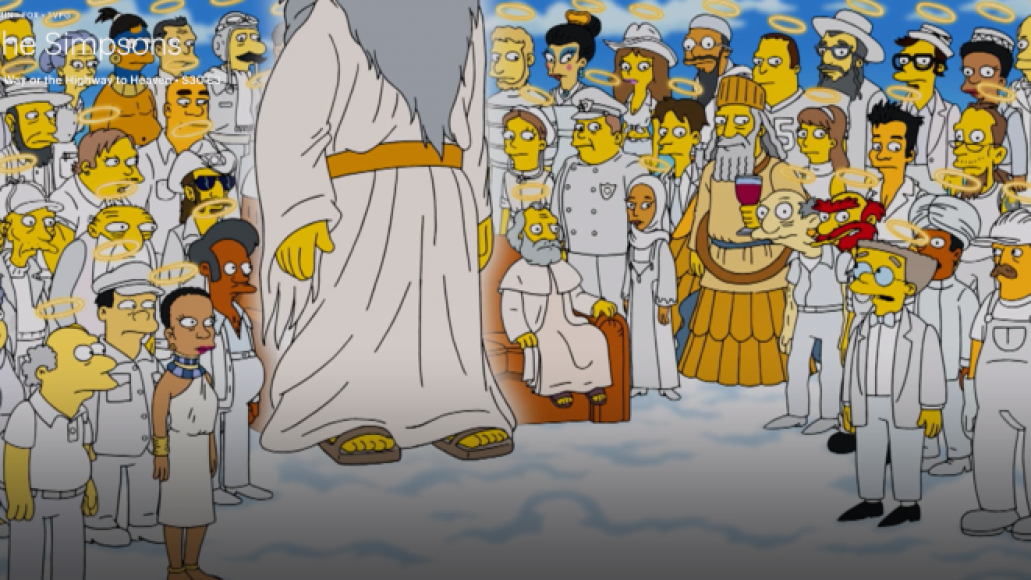 Earlier this year, the series bit their thumb at the controversy with “No Good Read Goes Unpunished”, which found Lisa and Marge debating over a book titled The Princess in the Garden, which had been edited by the family matriarch to be as unobjectionable as possible. By the end, Lisa addresses the TV audience directly, saying, “Something that started decades ago and was applauded and inoffensive is now politically incorrect. What can you do?”

Following the episode, Groening also responded to the controversy, saying: “I’m proud of what we do on the show. And I think it’s a time in our culture where people love to pretend they’re offended.” Of course, Azaria didn’t share those sentiments and told Stephen Colbert that he would be “perfectly happy and willing to step aside,” adding, “listening to voices means inclusion in the writer’s room. I really want to see Indians, South Asian writers in the room. Not in a token way, but genuinely informing whatever new direction this character may take. Including how it is voiced, or not voiced.”

Shankar feels the decision to outright delete the character is a poor one. “If you are a show about cultural commentary and you are too afraid to comment on the culture, especially when it’s a component of the culture you had a hand in creating, then you are a show about cowardice,” he says. “It’s not a step forward, or step backwards, it’s just a massive step sideways. After having read all these wonderful scripts, I feel like sidestepping this issue doesn’t solve it when the whole purpose of art, I would argue, is to bring us together.”

In the same interview, Shankar argues that his crowdsourcing “was never meant to be an attack against anyone,” and goes on to praise the winning script by Vishaal Buch, calling it “clever and authentic.” As IndieWire notes, the script would bring Apu from a “single store owner to a thriving businessman in Springfield” and would involve “other prominent Indian Americans in hilarious ways to highlight the importance of diversity and individuality.” He says he’ll produce the episode through his Bootleg Universe YouTube page.

Currently, The Simpsons is amidst its 30th season on Fox.

Apu is being written out of The Simpsons in light of controversy: Report