Over the past couple of weeks, promoter Danny Wimmer Presents has unveiled the lineups for their massive 2019 spring rock festivals, including Sonic Temple, Chicago Open Air, Welcome to Rockville, and Epicenter. And while all the lineups are stacked with impressive rosters of hard rock, metal and alternative acts, each festival has its own distinct flavor.

Epicenter, which takes place May 10th-12th in Rockingham, North Carolina, is being billed as a European-style camping festival. The 2019 lineup features headliners Tool, Foo Fighters, Korn, Rob Zombie, The Prodigy, Judas Priest, Bring Me the Horizon, and dozens of other acts, but the experience will extend well beyond the daily music lineups, thanks to the newly created Rockingham Festival Grounds.

We spoke with Danny Wimmer himself to get the lowdown on the inaugural Epicenter fest, and he laid out what fans can expect from the three-day event. “Epicenter is really our first full-on immersive camping experience,” Wimmer tells us. “We have camping elements at a lot of the festivals, but not where we expect 80 percent of the audience to camp, like we do at Epicenter.”

One of the highlights of Epicenter is that each day will not end when the headlining band plays its final note of the night. “We’re not having a curfew, so we’re able to do things differently at night,” explains Wimmer. “We can create super jams late at night, we can basically go all night and we can invest in nighttime activities.”

The camping aspect will allow concertgoers to take a breather from the nonstop music, if they so desire. “The camping is attached to the festival, so fans will be able to go in and out,” says Wimmer. “You can come into the grounds, hang out and see your favorite bands, and then go back to the campground. It’s just a different experience from some of our other festivals.”

In addition to all-star jams, Wimmer is planning to stage comedy sets and other entertainment for the late-night Epicenter crowd. He concludes, “When the main festival shuts down for the night, what we’re calling the Rockingham Village will just be starting up, and the party will go as long as the people want to party.”

Tickets for Epicenter are on sale now at EpicenterFestival.com. The full daily lineup of bands can be seen in the poster below. 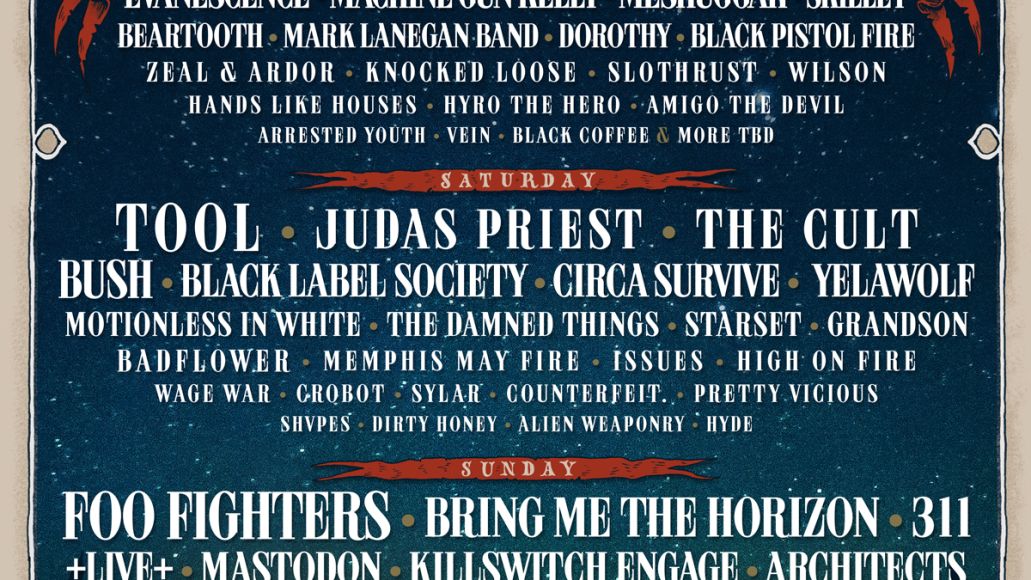 Epicenter Festival will allow fans to "go all night"