Historically, Americans have treated the words “the British are coming” as a warning. In the case of Saturday Night Live, the news that British actress Claire Foy would be hosting last night’s show shone like a beacon of hope. After a less than stellar (hell, almost unbearable) first six episodes of Season 44, Lorne Michaels and team had no business shooting down help from anyone — not even the redcoats. If nothing else, they had to figure Foy’s accent would charm American audiences for at least the monologue … and it did.

However, the star of Netflix’s The Queen had more going for her first time as host than a posh accent and a teacup full of your-country-is-actually-more-fucked-than-mine jokes. The actress played a variety of straight roles that allowed the cast to deliver some of their silliest and funniest performances of the season. Also, Oxford (Foy attended the School of Drama) met Oxnard last night when hip-hop star Anderson .Paak guested and brought a special friend (more later), and frequent guests Ben Stiller and Fred Armisen returned to help fill out Donald Trump’s (Alec Baldwin) inner circle of very fine people. While last night didn’t offer enough laughs to make us forget how bad the current season has been, Michaels would be wise to tell Foy that if she must Brexit, NBC would gladly take her in. Accent and all.

Mueller on My Mind

With the Mueller investigation breathing down the president’s neck and provoking 3 a.m. Twitter tantrums, it was only a matter of time before Alec “Rock ‘Em Sock ‘Em” Baldwin would return as Donald Trump, despite having been arrested for acting out the plot of a Seinfeld episode. And while we got to see bat-like Rudy Giuliani (Kate McKinnon) flash his fangs and heartbroken Michael Cohen (Stiller) finally call it quits, the most fun came from seeing Trump being made the odd tyrant out as topless Vladimir Putin (Beck Bennett) and the Saudi crown prince (Armisen) swapped yuks at the president’s expense. “I prefer presidents who don’t get indicted,” needled Putin at one point. We do, too, Vlad. We do, too.

If America wasn’t already 100% clued in to who Anderson .Paak is, they should be after last night. In the most electric musical performance of the season, .Paak appeared in bucket hat and shades front and center behind his drum kit, seamlessly laying out the percussion to jazzy jam “Tints” while also carrying lead vocals. .Paak’s performance was so impressive that nobody would’ve been disappointed even if surprise guest Kendrick Lamar hadn’t casually perched on the drum kit’s riser to deliver his knockout verse. Later, .Paak would rap, dance, and thrash in a haze of red smoke to his latest single, “Who R U?”, reminiscent to Kanye West blowing minds with his mesmerizing live performance of “Black Skinhead” several years ago. These are the types of SNL performances that can launch an emerging star into the mesosphere. Or at least cause him to blow up so much that he needs all his windows tinted.

SNL scored the most laughs last night when it got Abraham H. Parnassus levels of silly and demented. Foy reprised Kristen Stewart’s role as Charlie Bucket as TMC delved back into the mysteries behind the bed in Willy Wonka that held four grandparents for multiple decades. This time around, we learned what happens when Charlie’s g-parents get a little frisky. Luckily, we never actually saw anything. The act was left up to our pure (or maybe impure) imaginations as wall plaster fell, bedposts rocked, and Mrs. Bucket (McKinnon) tried to sing to Charlie as a distraction. To see the cast cracking up and the scene escalate to levels of absurdity not witnessed on the show in ages served as a reminder that a big, dumb risk can sometimes have a huge reward.

Mueller … All I Want for Christmas Is You 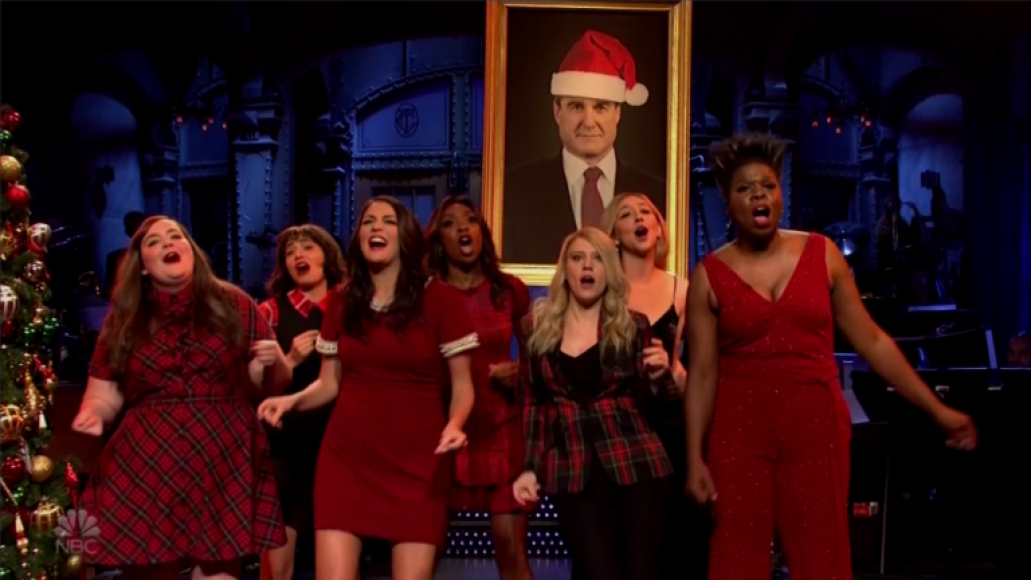 Two years later and many of us are still trying to figure out how educated women voted for Trump. Apart from immigrants and our dearest global allies, Trump has insulted the dignity, intelligence, and integrity of women more than any other demographic. It was therapeutic, then, if not entirely festive, when the women cast members of SNL took to the stage at the close of last night to sing a holiday-tinged jingle urging Robert Mueller to deliver his scathing, indicting report under their Christmas trees this December. “Our balls are fully blue,” they sang, “Mueller, all I want for Christmas is you.” It’s the type of gift that would make all of us believe in Christmas miracles again — or at least human decency.

Kyle Mooney and Beck Bennett once again saw one of their wonderfully weird and abstract sketches cut for time. Fortunately, SNL had least had the decency to post it online.

Saturday Night Live Highlights: Anderson .Paak and the Ladies of SNL Sing in the Holidays