Track by Track is a recurring new music feature that asks an artist to break down each song on their latest record, one by one.

Six years ago this week, the boys of FIDLAR burst onto the national scene like a shotgunned can of beer. On their self-titled debut, Zac Carper, Brandon Schwartzel, and the Kuehn brothers (Elvis and Max) delivered a 21st-century skate punk opus, one filled with cheap weed, cheaper beer, and the VHS-quality rage that comes with being young, bored, and kinda retro. It was punk for our time, and it owned.

Now, the men of FIDLAR are a little older, a little more sober, and even more conflicted about the world around them. As you listen to the songs of Almost Free, you might be surprised at the subject matter (there are songs that tackle gentrification, political division, and even the pitfalls of texting) and the arrangements (those horns are new, for one thing) but not by the sneering humor and razored-up energy with which it’s picked apart. In short, FIDLAR is still producing punk for our time. It’s not their fault that our time is kind of a drag.

Hear Almost Free in full below:

For the latest Track By Track, I corralled Zac and Elvis for a free-wheeling chat about their new record and the stories surrounding it. Above, listen to our full audio interview for their thoughts on LA’s skyrocketing rents, producer Ricky Reed’s magic touch, and the new, catastrophe-free definition of the word “nuke.” A condensed, text-based preview is below.

Zac Carper: So, I grew up in Hawaii. [“Get Off My Rock”] originally started as a song about Los Angeles. It was supposed to be “Get Off My Block.” In the neighborhood I moved into, there was just a lot of backlash for people moving into it, you know? Gentrification and everything like that. When I went back to Hawaii, I saw it at a whole different scale. I hadn’t gone back to Hawaii in three years, and I went back and just saw my neighborhood totally change.

It was basically one of the first ideas written for this record. That song was an experiment that was like, basically, how do you get away with doing a song like that without any punk drums or whatever. It was […] more like a Beastie Boys vibe than anything. We just used a bunch of drum machines and stuff like that instead of a bunch of guitar pedals and guitars and distortion. It was a weird experiment that just took on a life of its own I guess.

Elvis Kuehn: We’ve also covered Beastie Boys songs, and I’m pretty sure we all grew up listening to The Beastie Boys, so it’s not really too far out of our wheelhouse as it might seem. 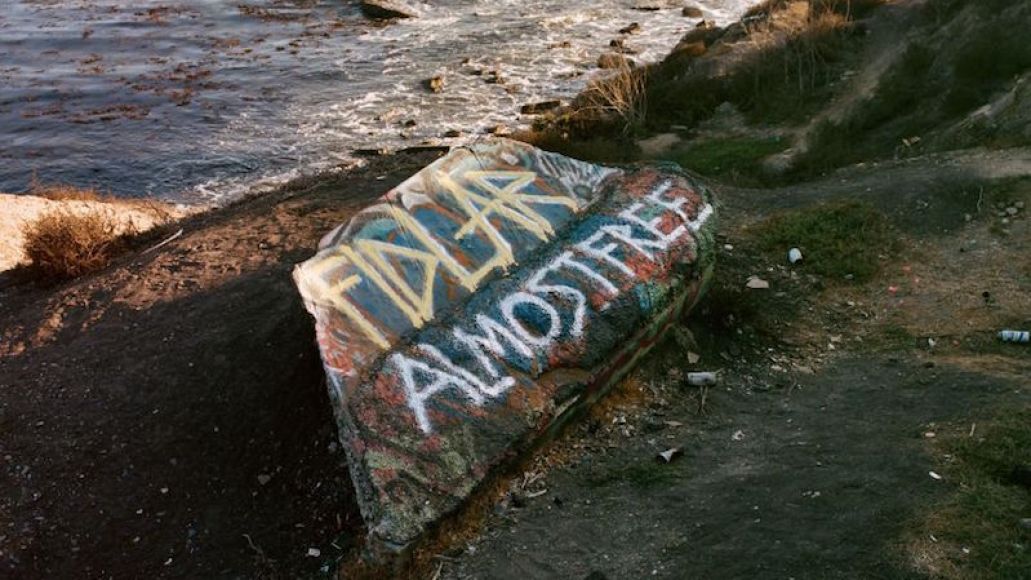 ZC: We both sang differently on [“Can’t You See”]. I just realized this the other day. We’re both singing different than we usually do.

ZC: Elvis is super melodic in the verses and the chrouses are more low. It’s a weird contrast, or difference. We’ve never sung like that before, so that was kind of exciting. It was uncomfortable at first, then it kinda got comfortable, and playing the song live is just so fun. It’s so different from our stuff. It’s so fun to do.

EK: Yeah, it’s nice to break it up like that. It’s nice to have more of a groove. I like what Ricky did and what the mixer did. Manny Marroquin mixed the record.

EK: He’s an amazing mixer. There’s different vocal sounds for both of our vocals and it really works having that with different characters. It gives it variety, but it works together.

EK: I think we’ve always been into taking dark subject matter and making the music happy. I just always liked that sort of juxtaposition.

EK: [“Flake”] definitely stems from an experience with somebody in my life, but it became a little more general, I think. Especially about having friends in LA, you know, people who are flakey to make solid plans with. It’s become a lot easier to blow people off nowadays. With phones, you can kind of hide behind the texting. [“Flake”] was just an honest reaction to that.

EK: I went through a couple tours without drinking. You just realize that you’ve gotten drunk enough times that you know, at a certain point, you aren’t missing anything. You’ve done this, you know what it entails. It can be fun, it can be a good experience, but when you experience all of that for a year or two… It’s good to pick and choose when to drink. Especially on tour, it’s still hard. I guess it’s our choice to have alcohol in the dressing room, but you play a show and there’s always booze. You can’t escape it.

ZC: I think it’s the only job in the world that’s like “Ok! Here’s alcohol! Now go do your job.” Like, there’s no other job in the world that does that. I don’t know any other job. Not acting, nothing. It’s literally like “Here’s a bunch of alcohol. You have like 4 hours until you play. So have fun!”

ZC: We kept playing [the demo for “Almost Free”] in the studio over the speakers, and kept trying to come up with lyrics [or] a chorus or hook. We did that for a few hours and it just didn’t really go anywhere. Then we just kind of left the track be for a while. We never thought that it’d be on the album. We were like “Oh yeah, that track is cool. Maybe we’ll do something with it later. Next record.”

And then, last minute, Ricky was like “Let’s wrap this song up and put it on the record and get these horn players to play the horn parts.” He had the idea to keep it instrumental. I would have never even thought of that, so that was pretty cool that he suggested that. It was the last thing we did on the record. It came together really fast.

ZC: I guess the inspiration for [the horn parts] was, when I was making the demos for “Almost Free” and “Scam Likely”, I was listening to the Stones’ Exile on Main Street, and I think I just really liked the use of horns on that record. In the original demo, they were just midi horns, basically. I’ve just always liked horns in rock and roll. It’s something that I’ve always kind of wanted to try. For “Scam,” I had these parts, and Ricky kind of helped develop them a little bit more and he called some guys to come in and play on it. They were just super great session players who did some improvising, too. On “Scam” there’s some cool horn riffing and stuff like that.

EK: Well, me and Kristine have been friends for a minute. She hit me up. I was just going through a gnarly breakup, and she was like “Hey, let’s write a song.” And I was like “Ah, I can’t write right now. I’m pretty heartbroken.” And she was like “Perfect. Let’s write a song.” So she came over to my studio and we were writing, and nothing was coming out, and then we went next door and got drunk and came back and – it was literally three notes, and then we wrote this tune. It was really weird how it happened.

ZC: [“Nuke”] is about the dude after the show or at a party that just, like, chews your ear off. Or, they’re all coked out and trying to show you their music on their phone, or something. You know what I mean? There’s just a bunch of—like, that’s what we call a nuke. You know, it’s like, you could go—sometimes, the backstage is so nuked out, it’s like, “Oh, don’t go in there, it’s radioactive.” We’re saying that to each other. Like, “Oh, man, it’s just Chernobyl, like, don’t do it.” […] Also, you can say in front of people, and they have no idea what you’re talking about. If some dude was yapping at you, and I look at Elvis and I’m like, “Dude, nuke”—[that dude] would have no idea what I’m talking about, but, Elvis would. You know?

ZC: The world is fucked up right now. I mean, it’s been fucked up, but right now, like—everything’s pretty fucked up. 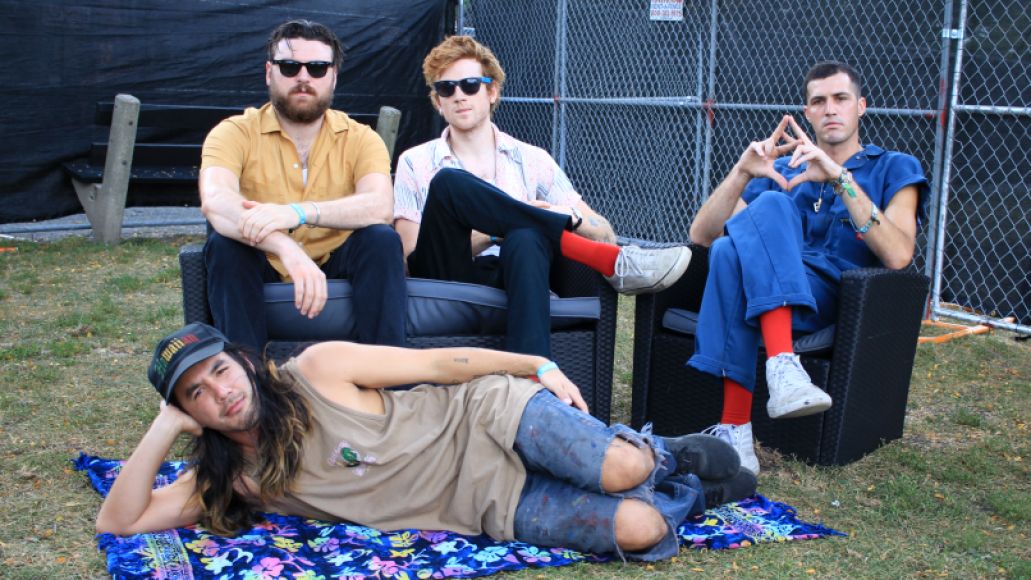 ZC: The track just sounds druggy. You know? So to me, it was like, “Oh, this sounds druggy, we should probably write about drugs.” But it’s like, subconsciously. We didn’t know that. It just has this weird vibe to it.

EK: And then the verse came from different stuff that I had experienced with a with a friend of mine—like, seeing him out at a bar when he was not doing well, and kind of overhearing things in LA. I just kind of had this verse […] that I made up when I was driving. Not even to, like, any music or anything. Sometimes that’s how things come up, you know? Like, they just pop into your head and then you kind of have them for a while. Once Zach sent me the track, I just realized, “Oh, this totally works over this.”

“Good Times Are Over”:

EK: This song totally came about in the studio. You know, I think Zach had the melody in his head, and then brought it in, and we just started playing—

ZC: Literally on the way to the studio. I was getting frustrated with somebody, and was a couple of blocks away from the studio, and just had that first melody line, and that first line. And then I brought it in, and we all worked on it together.

EK: t was the most collaborative song on the record, I’d say, ’cause we really just kind of wrote it in the studio, with Ricky as well. So, in that way, it kind of makes sense to be the closer, because it felt like that was the one that we all really had a part in.

Steven Page on Broadway and a Potential New Album