Being Batman was anything but a delight for Ben Affleck. Between the critics and the studio heads, the insurance companies and the behind-the-scenes shuffles, his reign as the Dark Knight was more torturous than triumphant. Alas, that’s the DC Cinematic Universe in a nutshell.

Last night, however, Batfleck had his reckoning on Jimmy Kimmel Live. With his tongue planted firmly in his cowl, Affleck sent off his cape into the darkness of the rafters and clumsily proclaimed on the camera that, well, “I don’t know. I guess, uh, I’m not Batman?”

The whole ceremony, if you can call it that, was conducted by Kimmel and his trusty sidekick Guillermo, who wore about the crappiest Robin costume you could assemble. He helped wave bye-bye to the Batman threads, which was also adorned with the words “Batfleck” and the number “12.”

(Ranking: Every Batman Movie from Worst to Best)

In between the gags, which later included a funny bit involving Matt Damon’s rhinestone-studded underwear from Steven Soderbergh’s Liberace pic Behind the Candelabra, Affleck got a tad confessional about his role with the franchise. It was even sad.

“I tried to direct a version of it and worked with a really good screenwriter but just couldn’t come up with a version,” Affleck said. “I couldn’t crack it and so I thought it’s time for someone else to take a shot at it. They got some really good people, so I’m excited.”

Of course, Affleck’s referring to Matt Reeves and his noir-leaning reboot The Batman, which was recently was given a June 25, 2021 release date by Warner Bros. Clearly, Affleck won’t be involved, which leaves the door open for a replacement. God bless ’em. 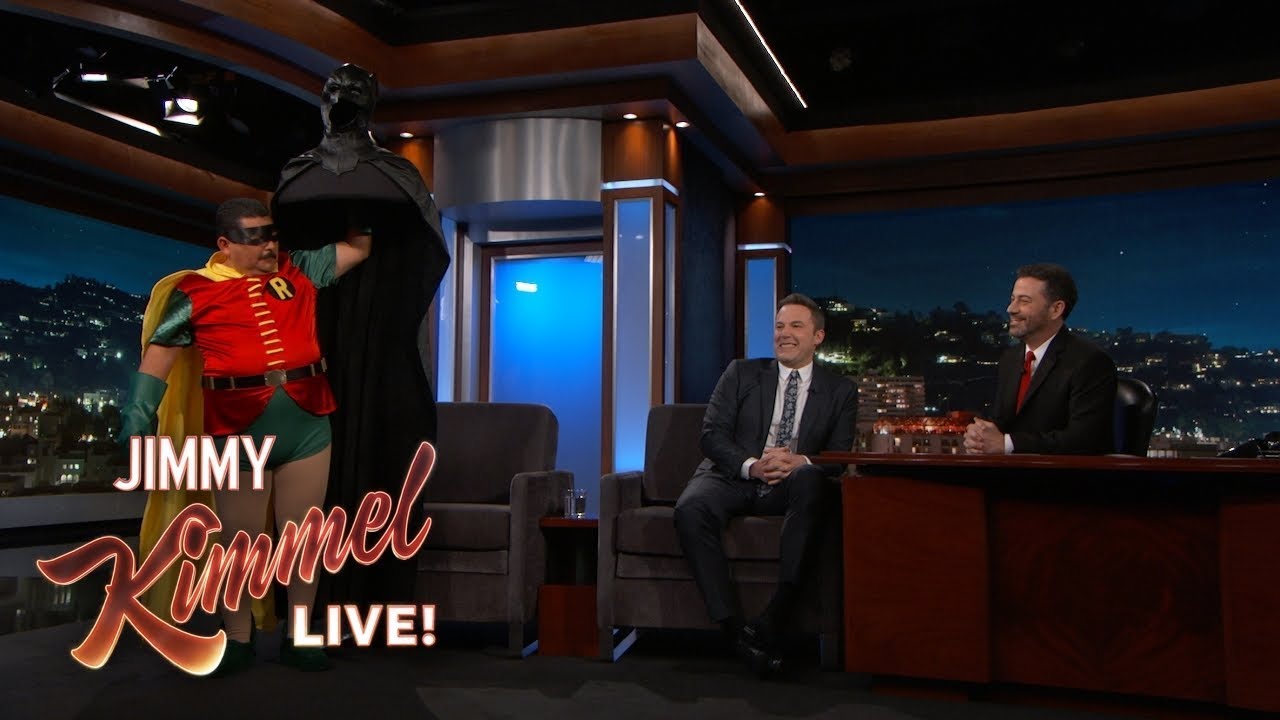 In related news, it would appear Affleck’s Batman will be joined on the sidelines by Jared Leto’s The Joker. According to Forbes, Leto’s standalone Joker film has “fallen by the wayside” along with the “Mad Love-type Joker and Harley Quinn film.”

That’s not just a win for Gotham, but a win for us, especially when you consider we already have Joaquin Phoenix bringing a little Scorsese to the role this fall, James Gunn rebooting Suicide Squad, Wonder Woman heading back to the ’80s, and Harley Quinn scouring for Birds of Prey.

Ben Affleck hilariously hangs up the cape on Jimmy Kimmel: "I guess, uh, I’m not Batman?"