Model Kelleth Cuthbert, whose real name is Kelly Steinbach, became the unlikely breakout star of this year’s Golden Globes. She didn’t gain attention for her role in any prestigious film of television show, but rather she achieved overnight virality by accidentally photobombing celebrities on the red carpet while slinging Fiji Water.

Instantly, the images of Steinbach serving looks behind A-listers while holding the bottle beverage led to the Internet dubbing her “Fiji Water Girl,” a moniker the company ran with by printing cardboard cutouts of her likeness to launch a new promotional campaign. However, Steinbach is not happy with the company’s antics, alleging that they pressured her to “sign away her rights to ‘Fiji Water Girl’” in a fake promotional video and then subsequently used her image without her consent or a contract.

In a new lawsuit lobbied against Fiji Water (via E! News), Steinbach’s attorney Kimberly Buffington writes that, “The fake document Steinbach fake signed in the potential future promotional video was not an agreement… The fake document was not signed by Fiji Water and was later destroyed by Steinbach.” Her legal team estimates that the “Fiji Water Girl” moniker accrued the company at least $12 million in terms of brand exposure.

Tip of the cap to Fiji water girl, superb performance out of her last night. pic.twitter.com/RMxE37YQQE

The company disputes Steinbach’s assessment, writing in a statement, “This lawsuit is frivolous and entirely without merit. After the Golden Globes social media moment, we negotiated a generous agreement with Ms. Cuthbert that she blatantly violated. We are confident that we will prevail in Court. Throughout our history, we have had a sterling reputation working with talent.”

Prior to the lawsuit, Steinbach commented on her sudden Internet fame by clarifying that it was unintentional. Speaking with PEOPLE, she said “There’s tons of photographers everywhere. It doesn’t matter where you stand, you’re in the crossfire of every shot. You’ve gotta have good face, at least, if you’re gonna be hovering in the background frequently.”

Of course, Steinbach has also capitalized on her moment, appearing on James Corden after the event to milk the meme-machine her fair share. You can watch her appearance below. 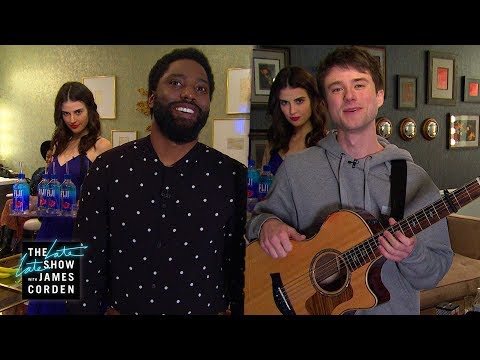