A certain infamous failure of a music event left a bad taste in everyone’s mouth when it came to the concept of a “destination festival.” Suddenly the idea of a successful, high-end experience taking place on a tropical island escape seemed dangerously, laughably impossible. But the folks behind KAABOO Cayman aren’t those other guys.

KAABOO is already a valid brand, having thrived for four years over in Del Mar, California. In 2019, they’re expanding to both Texas and, yes, Grand Cayman. On the mainland, their achievements have rested in their ability to curate a “festival for everyone,” one where nostalgic mainstays and FM boppers coexist alongside comedy greats and culinary treats. When the top acts of both the classic and contemporary music landscapes are presented simultaneously like that, it stands in defiance of the over-stuffed mentality of other festivals fighting to keep up with the cool kids.

Now, take that simple yet fearless booking policy and place the stages out on Seven Mile Beach along the Caribbean Sea. Surround those performances with indulgent experiences like spas and IV nutrient therapy, exclusive upgrades like a cabana-lined beach club, and local flavor from chefs and visual artists alike, and you have KAABOO Cayman.

In its first year, KAABOO Cayman is looking to not just overcome the preconceived notions around festival getaways, but completely drown them in extravagance. True to their ethos, it begins with their eclectic lineup, a crowd-pleasing mix that is looking to serve up something the islands have never seen before. As it’s still a luxury event, though, we thought we’d break down the bill as if it were that most decadent of sensory experiences: the prix fixe three-course meal.

For each day, we’ve given you three acts you’ll want to catch one after the other — your appetizer, entrée, and dessert, as it were — to take in as your breakfast, lunch, and dinner. This is an entertainment experience on a freakin’ Caribbean island, people — indulge. 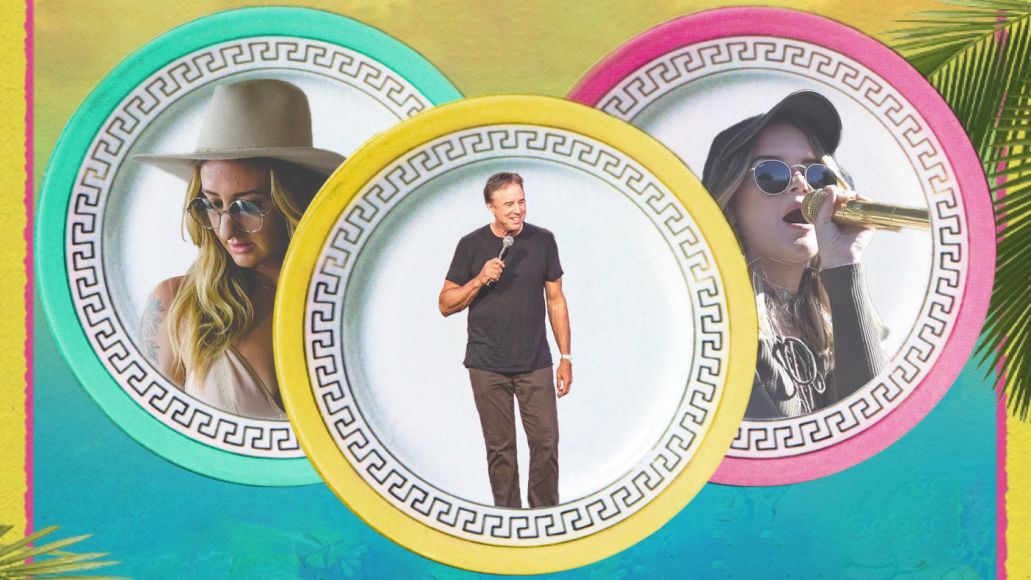 Appetizer: Margo Price is the ideal kickoff to your first evening’s meal. The Best New Artist Grammy nominee delivers on gorgeous, laid back country crossover appeal, the kind that’s going to mix perfectly with the breeze coming in on Seven Mile Beach.

Entrée: One of a number of Saturday Night Live alumni coming to Grand Cayman, Kevin Nealon is the sort of “dad” comic that’s going to please just about everyone. Flashy? No. Risqué? Barely. But it’s good, and that’s the sort of easily digestible humor you need to ease into the weekend.

Dessert: After all this easy-going fare, you don’t want to take a giant swing into something too lush for the final course. That’s where Maren Morris comes in; she’s got the country swagger that rounds out well after Price and Nealon, but with a dose of pop sweetness to leave your ears’ taste buds tingling. 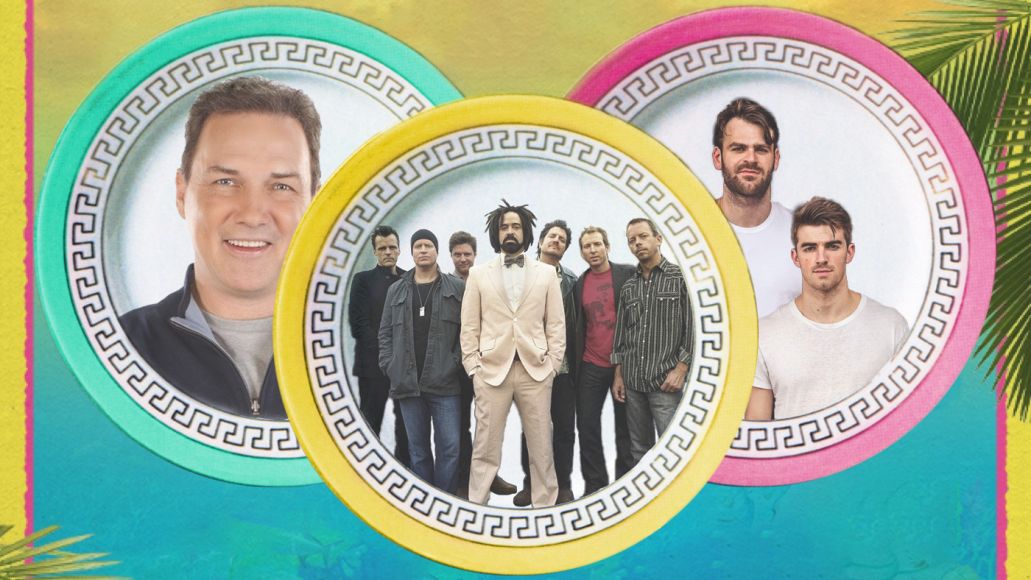 Appetizer: This spread is all about getting the best of all KAABOO has to offer, so we’re starting with one of the weekend’s comedy highlights: Norm MacDonald. The comic legend is so idiosyncratic, so devastating, so just strange, you could make a feast out of his set alone. As a starter course, it’ll set a high bar for what’s going to be a weird and wonderful first night.

Entrée: Friday night’s dinner is a classic poultry cut that’s simple yet satisfying. So much of the KAABOO lineup is going to be about classic sing-a-longs, and Counting Crows should be able to provide at least three of four of the best.

Dessert: The other third of the bill is all about party jams, and few are currently as big as The Chainsmokers. True, they serve up some pretty over-baked EDM pop, but a good chunk of the KAABOO crowd will likely be looking for some glacé treats to end their first night with a bang, so you might as well dig in. 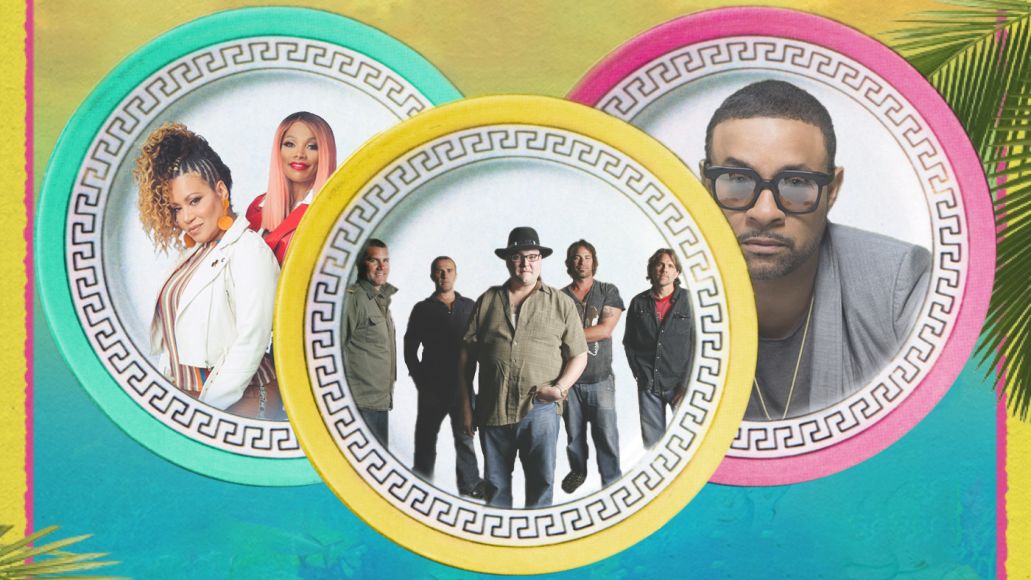 Appetizer: Throwbacks and dance music are KAABOO’s M.O., and Salt-N-Pepa nails the perfect marriage of both. Their hits are still blowout bangers, even two decades after their hayday, making them the perfect first snack of day two.

Entrée: You’ll want something tasty but not too stodgy for your mid-day meal, so it’s the perfect time to rock out with Blues Traveler. Most of the stuff that’s going to fill you up will be cuts from 1995’s four, but even John Popper’s less familiar harmonica licks will be plenty tasty.

Dessert: Looking for something smooth, rich, and just a bit provocative to complete your first Saturday trio? You’re not going to find many more sensual or geographically appropriate jams than Shaggy, a suitably sexy way to slide into the evening. 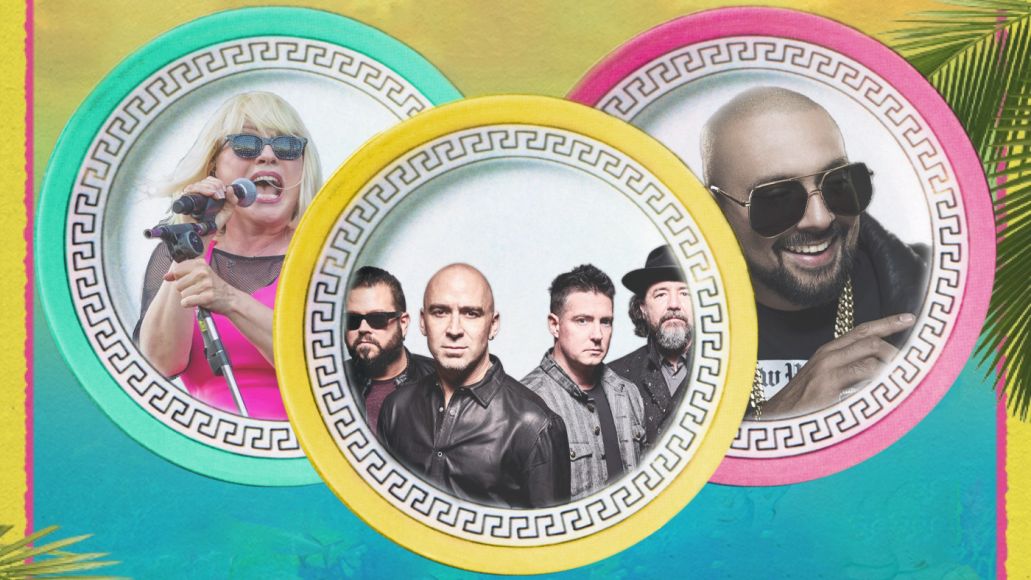 Appetizer: This spread is going to take you chronologically through the decades KAABOO represents, beginning with the late-’70s/early-’80s new wave of Blondie. There may not be a more purely iconic act anywhere on the undercard, meaning you’d be foolish not to indulge in their eclectic, danceable hits.

Entrée: There’s nothing to remind you of the glory days that were the ’90s like a recently reunited post-grunge outfit. Live’s particularly hard-hitting rock actually stands out a bit on the lineup; while everyone else is serving lobster and filet, they’re dishing out chargrilled T-bone. Since KAABOO is all about variety, though, you’ll definitely want to take a big bite of Ed Kowalczyk’s massive vocals.

Dessert: This is an island festival, of course, so you’ll want your trip to the aughts to have a dancehall soundtrack. Jamaican export Sean Paul is so well suited for this sort of environment you’d think the festival was built around him. In fact, not only does his reggae rap complete this pairing perfectly, it leads right into the weekend’s final feast. 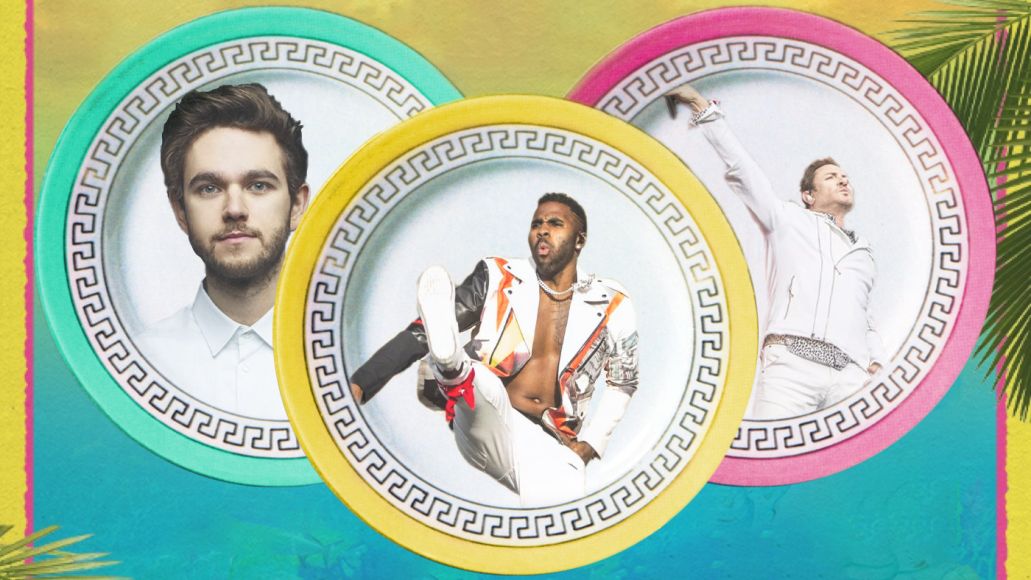 Appetizer: Considering how big 2018 was for him, young Zedd is perhaps the most contemporary musician on this entire bill. Add in the fact that you’d have to expect Maren Morris to come out for “The Middle”, and this becomes a must-watch party stop.

Entrée: Jason Derulo has got a little bit of everything going for him: the danceability of his pop hooks, the sex appeal of his R&B smoothness, the raunchiness of hip-hop bars. It’s the kind of sinfully delicious musical smorgasbourg that will keep you coming back for more — but save room for dessert…

Dessert: …Because you just know Duran Duran are going to close down this Caribbean musical experience with a performance of “Rio”, and that’s a treat that’s just too sweet not to savor.