Barrie have released a new single, “Darjeeling”, which is debuting alongside a delightful music video. The single comes ahead of their forthcoming debut LP, Happy to Be Here.

The quickly rising five-piece out of Brooklyn offers dreamy compositions, evoking the nostalgic sounds from ’80s pop with a contemporary twist. Or, as the band explained in their own terms, their goal is to create “a well-crafted pop song that’s a little bit fucked up.” Though the band takes its name from frontwoman Barrie Lindsay, they avoid the label of a solo project, as all members share instrumental duties and contribute vocals for sugary harmonies.

Barrie’s sound also reflects the musicians’ diverse backgrounds, with each one injecting their own personal styles into their work. Spurge Carter and Noah Prebish grew close over a shared love of house music, Sabine Holler is a German performance artist and solo musician, and Dominic Apa also tours with electronic-rock act Is Tropical. Noted Prebish, “Part of what makes Barrie greater than the sum of the parts is that it’s actually a bunch of freaks working together to make super accessible, satisfying music… so there’s a somewhat experimental nature to the approach.”

The band has released a new track titled “Darjeeling”, which epitomizes the group’s mode d’être. At first listen, the music is unhurried and carefree, with feel-good instrumentals and a delightful vocal performance. However, the tune gains depth with the addition of more dramatic synths and harmonies as it unfolds. Lindsay elaborated on its ambiguous and autobiographical lyrics:

“The opening line of the song — ‘The city towed my car the first night I got in’ — is true; my car got towed when I first moved to New York. The first night I hung out with Spurge and Noah, we went to this warehouse party in Bushwick on the train tracks, which was totally new to me. My car was in Manhattan, and when I went back to find it at 3:00 a.m. it was gone. So I walked along the West Side highway to the impound lot. At 4:00 a.m., it was this eerie wasteland of abandoned cars. It was in the honeymoon phase of moving to New York, and I remember feeling very happy and surreal in the tow lot. I’ve had a lot of experiences like that in the city, and I think I had that feeling in mind with this song — it’s kind of a collection of those vignettes.”

To complement the song’s release, the ensemble has shared a new music video that’s just as whimsical as the single. Directed by Zach Stone and Madeline Leshner, the clip similarly draws off the idea of vignettes by presenting unconnected and unusual visuals: iceskating on a pond, polishing trophies outside a mansion, chopping wood, tumbling down a snowy hill. The video is united through the use of old-school filters and voyeuristic camera work.

Happy to Be Here is due out May 3rd via Winspear. Inspired by the Barrie’s differing origins across the world (Boston, Baltimore, upstate New York, London, and São Paulo via Berlin), “The scaffolding of this album is moving to New York and finding these people that make up the band,” Lindsay says. The tracks were primarily written by the frontwoman, with the album co-produced, engineered, and mixed by Jake Aron (Snail Mail, Solange, Grizzly Bear) last August.

Pre-orders are live now, while you can find the artwork and tracklist below.

Happy to Be Here Artwork: 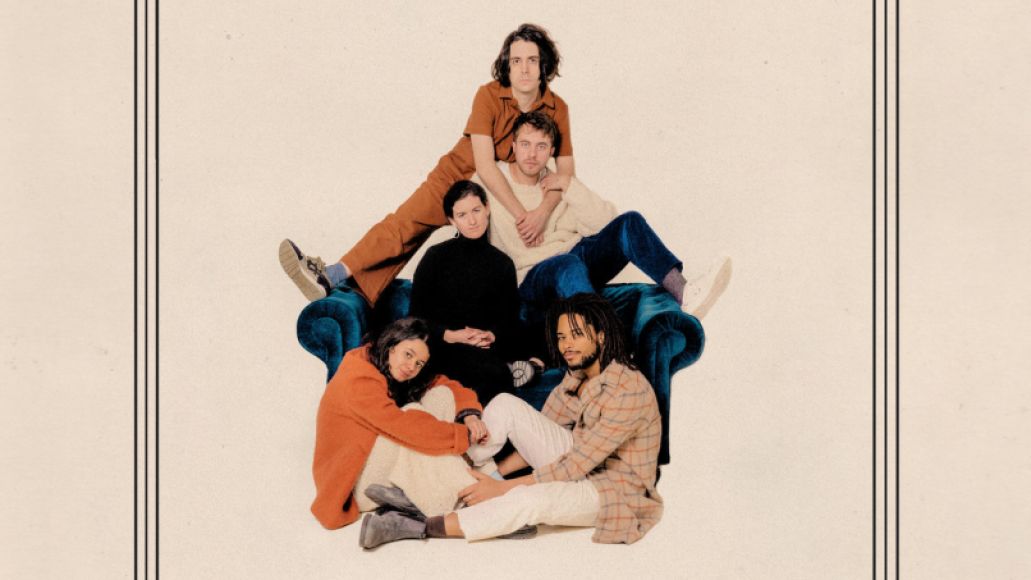 In promotion of the forthcoming LP, the band is currently on tour across the United States. In April, Barrie will embark on the European leg before returning to the US for select summer festival dates. Check out their itinerary below, and grab tickets here.