For over two decades, Michael J. Fox has been the face of Parkinson’s disease. His titular foundation alone has raised over $800 million and has worked extensively with the U.S. government with regards to both research and awareness.

In a new interview with The New York Times, the Back to the Future star revisited his tenuous past year in which he revealed some harrowing health issues, and offered his two cents on the current administration, particularly President Donald Trump.

“I was having this recurring problem with my spinal cord,” Fox opened up about his recent ailments. “I was told it was benign, but if it stayed static I would have diminished feeling in my legs and difficulty moving. Then all of a sudden I started falling — a lot. It was getting ridiculous.”

He eventually reached a point where he required surgery and physical therapy.

“I did it all,” he continued, explaining how he felt confident to act again. “Last August, I was supposed to go to work. I woke up, walked into the kitchen to get breakfast, misstepped and I went down. I fractured the hell out of my arm. I ended up getting 19 pins and a plate. It was such a blow.”

(Read: 30 Years of Back to the Future: A Timeless Masterpiece)

He added that, “It’s because I had certain optimistic expectations of myself, and I’d had results to bear out those expectations, but I’d had failures too. And I hadn’t given the failures equal weight.”

Despite these setbacks, Fox outlined a number of new advancements.

“There’s a new drug that’s been approved that’s like a rescue inhaler for when you freeze,” he explained. “Because freezing is a very real thing for Parkinson’s patients. I could be sitting here with my foot on fire and a glass of water over there on the table and all I’d be able to do is think about how good it would feel to pour that water on my foot. Treatments for that can make a huge difference in people’s lives. Now, if we can prophylactically keep Parkinson’s symptoms from developing in a person, is that a cure? No. Would I take it? Yes.”

Unfortunately, part of that development involves his work with the government, and the current administration isn’t exactly winning him over, at least not the president.

“Trump is not sitting around thinking about Parkinson’s,” Fox admitted. “But one thing that angered me is when he mocked that reporter. That was a stab to the guts. Not just for me, but for people I know and work with, who try so hard to overcome other people’s atavistic aversion to anybody that moves differently. So I thought, Do I say something in response? Then I thought, People already know Trump is an [expletive].”

(Read: Michael J. Fox Joins Dave Matthews to Jam Out on “All Along the Watchtower”)

Fox is referring to Times reporter Serge F. Kovaleski, who suffers from a joint condition called arthogryposis, and was cruelly mocked by Trump in South Carolina during the campaign trail in 2015. Fox is hardly alone in his feelings as Trump was heavily criticized following the incident, drawing ire from the press and many politicians, including then-opponent Hilary Clinton. Trump has since backpedaled on the moment.

Currently, Fox is working on a new book — he’s written three best-selling memoirs to date — which he says was inspired by the self-doubt he experienced over the past year: “I started to say, ‘Was it false hope I’d been selling? Is there a line beyond which there is no consolation?'”

He ultimately conceded, “For me to get to that place is pretty dark. I realized that the understanding I’d reached with Parkinson’s was sincere but risked being glib. I’d made peace with the disease but presumed others had that same relationship when they didn’t. Then when I started to deal with the effects from the spinal surgery, I realized: Wow, it can get a lot worse. Being in a position where I couldn’t walk and had health aides 24 hours a day, was I still prepared to say, ‘Hey, chin up!’ Parkinson’s, it’s a strange test.”

Clearly, he hasn’t lost his trademark wit or charm. Read the full interview for more personal anecdotes and insights, and revisit his work below on Curb Your Enthusiasm, where he managed to turn his Parkinson’s against the notorious bald asshole that is Larry David.

You can also make a donation to the Michael J. Fox Foundation. 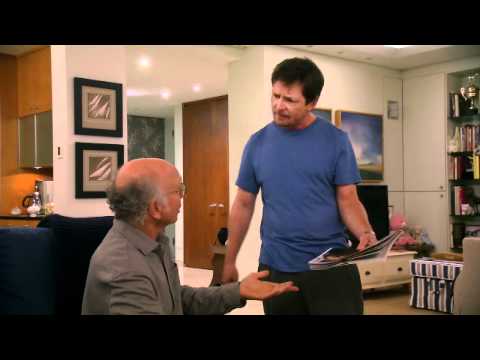