A forlorn man wants to erase the memory of his ex-lover, and the pseudo-scientific process is depicted through him traversing the desaturated hallways of his own mind, like Poe splattered with white-out ink. A gifted chauffeur-cum-ninja whoops the ass of several baddies through the very visual process of “Kato Vision,” a mix of Predator-like targeting and shoot ‘em up game logic that shifts speed and perspective like great acid. A Sharpie-drawn dog runs in circles to illustrate conceptual theory. A man’s stitched, felt pony comes to life through the power of dreams. A marching band proudly carries the beat as Kanye West pops “Jesus Walks” on the mic.

Who other than Michel Gondry could achieve such eclectic images?

A commercial and video wunderkind, Gondry’s transition to the silver screen was one initially met with puzzlement. Who is this French aesthete with wacky cuts, herky-jerky musicalia, and paper-mâché trinkets? Seventeen years since his debut, Human Nature, Michel Gondry is now an Academy Award-winning visualist and a cult entity admired for his ceaseless heart and imagination. But here’s the thing – he’s not just an eclectic. Gondry’s films above all else are about love, creation, curiosity, and the human desire to see the world a little differently.

As Eternal Sunshine of the Spotless Mind turns 15 this week, Consequence of Sound is looking back at the feature films of Michel Gondry, reflecting on his knack for offbeat sounds and images. Ground rules: music videos, shorts, and other parts of Gondry’s impressive list of credits will be covered elsewhere. In the end, we hope you’ll find this retrospective to be, trés magnifique? 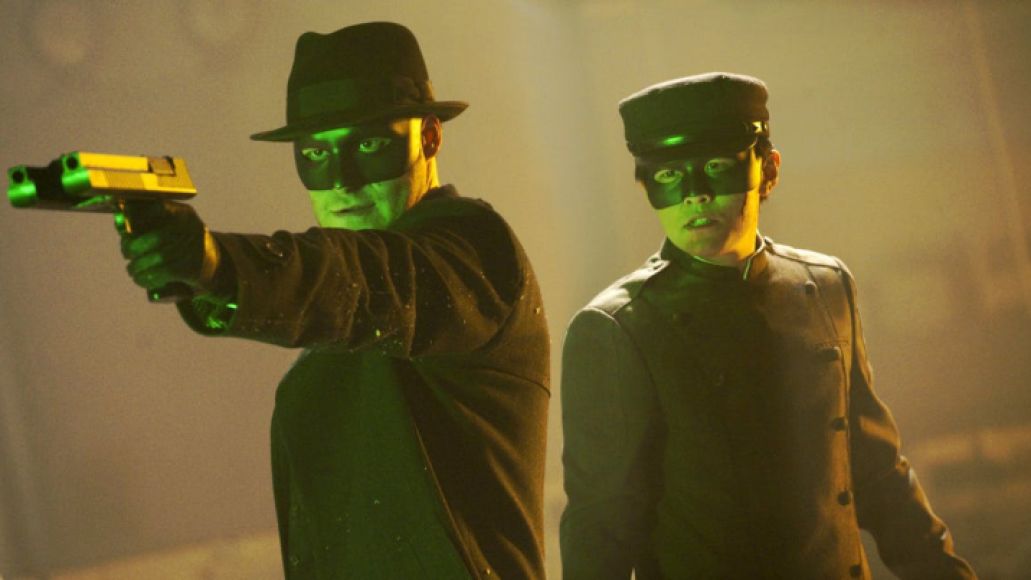 Plot: Britt Reid (Rogen). A total brat. Publishing heir with an affinity for partying. But inevitably he becomes a hero and dons a duster and mask under the alias “Green Hornet.” With his trusty aide Kato (Chou), Brit becomes an ersatz Tony Stark, fighting crime one screw-up at a time.

Music, Video: Gondry struggles to breathe under the confines of studio filmmaking here, but for what it’s worth, the soundtrack slays (Van Halen and Rolling Stones montages are the definition ‘guilty pleasures’), and James Newton Howard’s score is mostly traditional until it sneaks in some punchy rhythmic goods.

Father of Invention: The Black Beauty, hands down. The movie’s just so giddily aware of what a boy toy Hornet’s car is.

Think Visual: 3D studio filmmaking in the wake of Avatar, ladies and gentlemen. Gondry was forced to play with studio upcharge ideas here, and it’s an odd mix of Gondry’s vibe colliding with standard studio mayhem. But there’s cool stuff within. Cascading perspective shots, creamy and crude fights, and some flowy slow-motion. 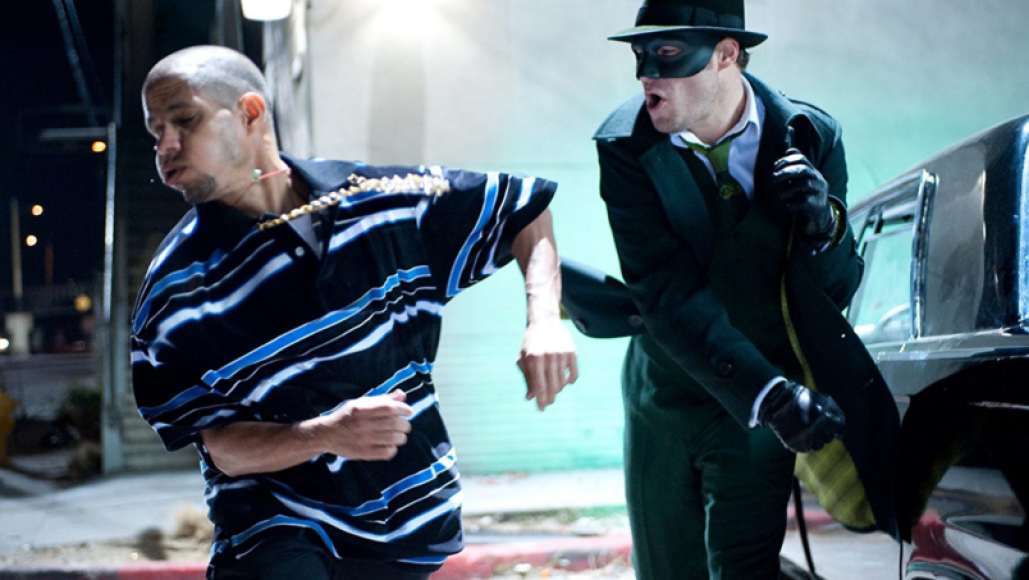 Can’t Cage him: Nicolas Cage was originally cast as Chudnosfky, the film’s villain. He dropped out after proposing he play the character with a Jamaican accent, which didn’t sit well with Gondry. Shame. Well…

Green Hornets: The property floated around Hollywood for years with bigs like Eddie Murphy and George Clooney and Jake Gyllenhaal being involved as far back as 1992. Eventually, after Kevin Smith dropped out around 2008, Seth Rogen wrote a draft that got momentum enough for a 2011 release. God only knows what the pre-production costs look like on this.

The Gondry Eye: Gondry’s best visual touch on this film is Kato-vision. It’s the most fun this movie gets. Well, that and the split car. Kato-vision is like a fun, more playable version of Bay and Bruckheimer.

Verdict: The critical verdict was swift and decisive. (Even mean, to be honest.) But also kinda fair. Green Hornet was an off and often clunky star vehicle for Seth Rogen that smelled of studio anxiety. It strives to make something above its action-comedy cliché and has enough style, cartoonishness, and creative imagery to get viewers to the end. But it’s often an exhausting effort. Best thing you can say: One wonders what another pure Hollywood effort might look like from Gondry. –Blake Goble 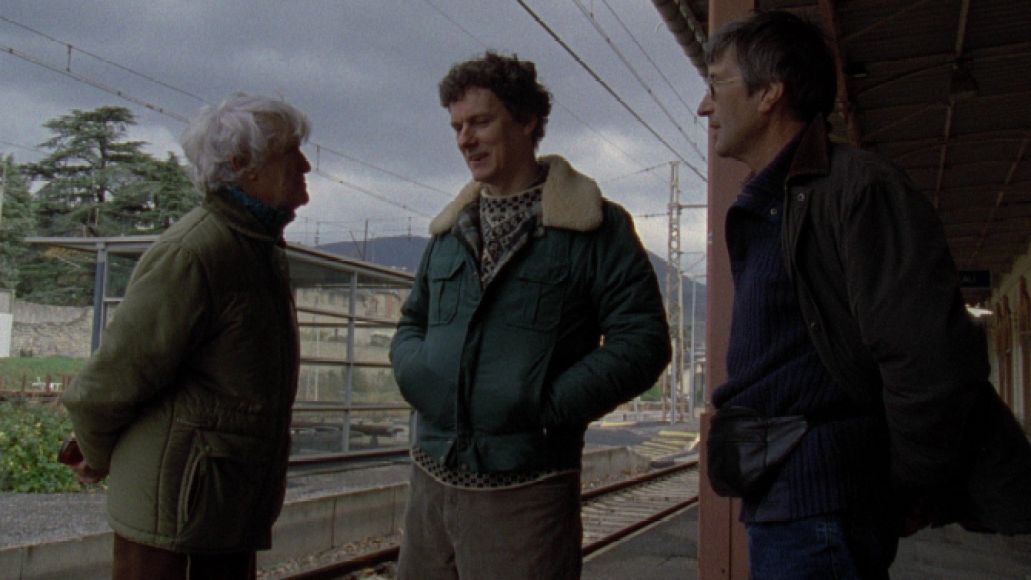 The Thorn in the Heart

Plot: Michael Gondry chronicles the life and times of his aunt Suzette and her relationship with her son Jean-Yves. In time, secrets about the reclusive Jean-Yves’ sexuality and artistic aspirations are revealed. And Michel interviews his aunt with a loving eye, as we hear of her years teaching, her spontaneity, and her passion for showing movies.

Music, Video: Does the film’s trains – station photography and toy recreations – remind anyone of the “Star Guitar” video? Is Gondry really into cabooses?

Father of Invention: Gondry is not making anything here. But he does use toy trains as a transitional device, fitting of Gondry’s visual witticisms.

Think Visual: There’s some funny projection and train stuff within. But at one point, Gondry and family beat the tar out of a stuck wheelchair. Trying to open and close it. The viewer assumes the chair is for Suzette. Nuh-uh. She asks what the chair is for, and Gondry explains: it’s a way to film her walking and talking with Gondry on the cheap. Roger Corman would be proud.

$17,849: That is precisely how much money this movie made at the box office. Worldwide! Arts, media, and entertainment writers make more than that yearly. Kevin Spacey movies in 2018, however, make less. Just pointing this all out.

Can Cannes: Thorn in the Heart was screened at Cannes, but didn’t win any awards. What? You were gonna ask, and this bit of trivia saved a trip to IMDB.

The Gondry Eye: The movie’s look is plain. Testimonials, with occasional cutaways. Something abot the cutaways to 4:3 home movies feels so decidedly uh, Gondry, in their use. Old film of Suzette would seem like an easy move for any other filmmaker, but Gondry caresses and presents the footage lovingly.

Verdict: Thorn in the Heart can feel a little home movie. Laugh-heavy meals, cutesy recreations of events past. It’s like Gondry attempting to make his own Italianamerican, with insight into his culture, his heritage, and the notion of motherly love. But in a less obvious sense, Gondry’s interested in memory and how it affects storytelling. (Granted, his quasi-thesis on maternal relations gets sidelined as a result.) But even when the film feels a little lax, or unclear, Gondry’s adoration and intrigue with his family is what carries the intimate project. Not essential. Challenging, too. But curious all the same. –Blake Goble 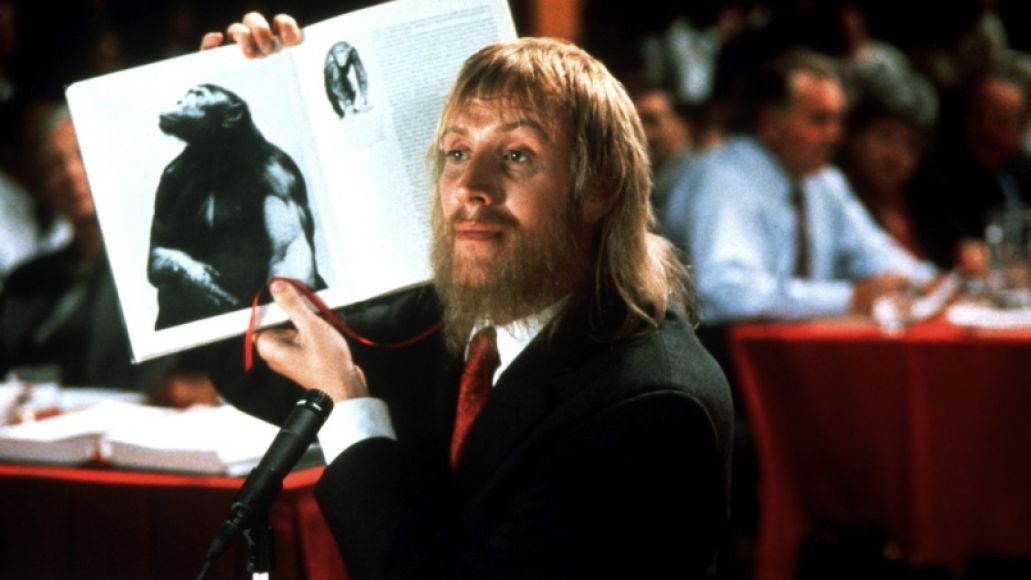 Plot: A love triangle evolves between a neurotic scientist (Robbins), a hirsute conservationist (Arquette), and a man raised in the forest like an ape (Ifans). Did we mention Charlie Kaufman wrote this? Yeah, making more sense now, huh?

Music, Video: Björk, we thank thee. Gondry cribbed on some of his natural imagery used in Björk videos of all things. Seriously. There are shades of “Human Behaviour” and “Bachelorette” in Human Nature. Gondry has a penchant for the woods, cabins, and interior spaces in both his debut and his Björk efforts that’s too similar to ignore.

Father of Invention: Tim Robbins’ Dr. Bronfman is teaching mice table manners. Ridiculous, yes. But see how many views a video of mice eating tiny food can get? The point being, mouse utensils are amazing, and we love them in this movie.

Think Visual: Gondry appeals to shabby science and crudely constructed sets in a way that feels like an early attempt at putting his aesthetic out there. Just look at the admittedly un-scientific setup here that Bronfman uses to train the monkey man, Ifans. 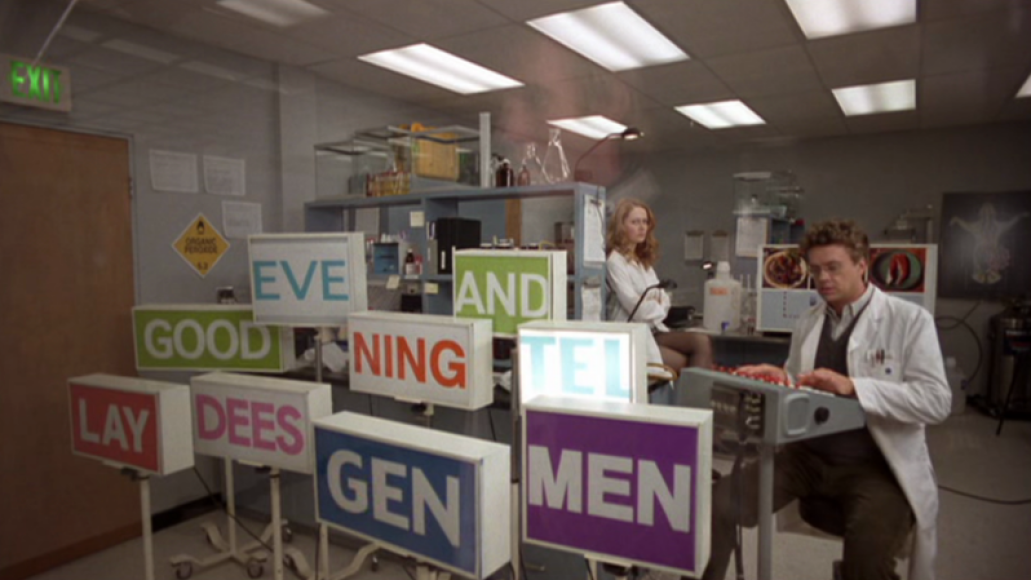 Considering Kaufman: Kaufman’s script floated a while, attracting talent like Steven Soderbergh and Spike Jonze. Jonze was close, Fine Line wanted him, and he suggested Michel Gondry in his place. A film career is born.

Duff Debut: This is Hillary Duff’s screen debut of all things. Hannah Montana with a hair problem. Hey, when someone asks, “What was Hillary Duff’s first movie?” You’ll know.

The Gondry Eye: There’s something serene about Arquette’s furried, naked singing in the forest that feels like it could have carried an entire Gondry music video. Abnormally tracked, artificially staged, and yet it’s surreal and beautiful in its primal simplicty. Through obvious fakery, more humane emotions become strangely tangible. That’s Gondry’s gift of blending right there. 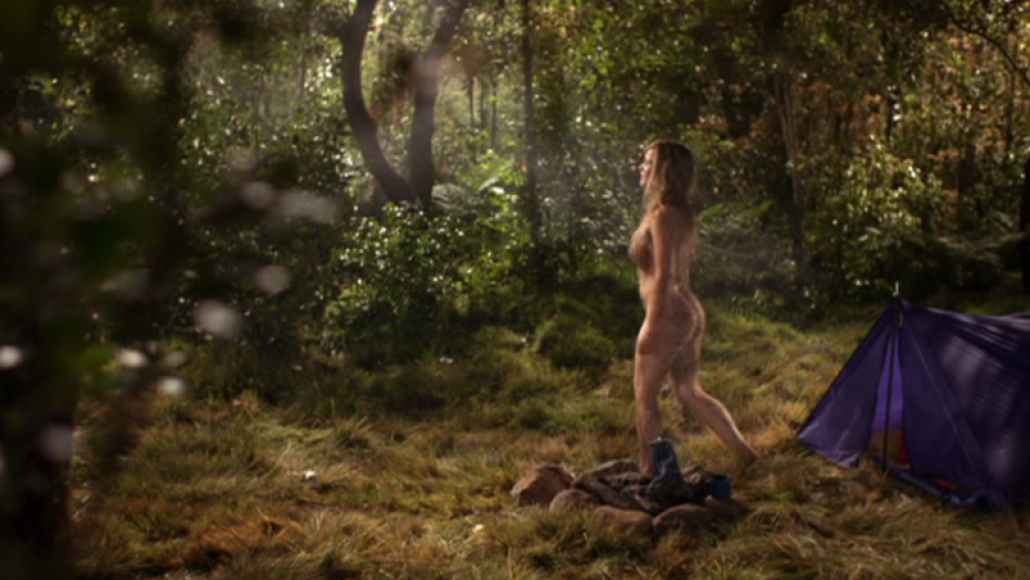 Verdict: It can feel a little static or attention deficit on the first watch, but Human Nature’s fun upon re-visitation. Perhaps a little ahead of itself in terms of understanding Gondry and Kaufman’s intentions, Human Nature takes curious approaches to evolution, romance, death, life, electrolysis, and fine dining. A worthwhile find and a show of Gondry’s promise. –Blake Goble