Nothing beats the visual sensation when ink collides with paper. That’s why we’re so psyched for Mondo’s new gallery, “The Art of Greg Ruth – A Twin Peaks Interpretation”.

Set to debut this weekend during Austin’s SXSW Film Festival, the gallery will include over 60 original prints, all influenced by David Lynch and Mark Frost’s intrepid series.

Ruth offered some thoughts on his inspiration for the series:

Twin Peaks changed everything in the spring of 1990, and I was mesmerized by its weekly soap-opera format and brilliant dance between mystery, comedy and romance and a kind of horror that had never before existed on the small screen. It influenced a generation of admirers and later inspired me to use it as a short series of portraits of the various keys characters as I tested my new love of graphite work under the umbrella of my self-assigned weekly drawing series, The 52 Weeks Project.

When Twin Peaks aired on Showtime® recently, it sparked an even more enthusiastic and complex series of original drawings that still seems inexhaustible. It is a wellspring of totems, symbols, storytelling and character that is unmatched by any other contenders out there. Twin Peaks continues to be a deep inspiration for me personally, and it is nothing short of the most insanely fantastic honor imaginable to be able to launch this print series and gallery show. If I could only whisper in my ear 27 years ago with the promise of this…

The opening reception takes place tomorrow, Friday, March 8th, at the Mondo Gallery (4115 Guadalupe Street). The gallery will then remain on display through March 12th. 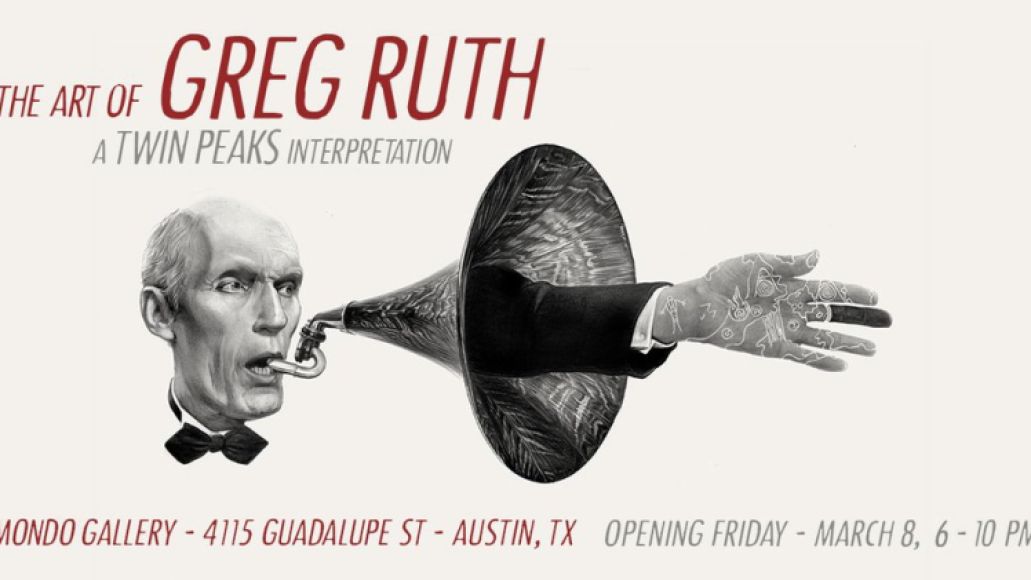 The Art of Greg Ruth (Mondo)

All giclée prints will be available for purchase starting opening night, and any remaining prints will be released online each month through August on Mondo’s official website.

In anticipation, Consequence of Sound has the exclusive preview on 10 original pieces, which you can see below. We’re admittedly particular to Leland Palmer. "Save Laura" x The Art of Twin Peaks (Mondo)