Now, Lang has revealed a stage-by-stage breakdown of who’s playing when and where. The festival will feature four distinct stages — The Peace Stage, The Love Stage, The Music Stage, and The Garden Stage — each of which will host a variety of *mostly* like-minded acts before giving away to a headlining artist.

Friday night’s headliners include The Killers, Miley Cyrus, and Santana. Somewhat awkwardly, Run the Jewels is wedged between Maggie Rogers and The Lumnieers on The Love Stage, while Robert Plant & The Sensational Shape Shifters will open for Santana. Also, Akon is playing.

Dead & Company, The Black Keys, and Chance the Rapper will serve as Saturday’s headliners. Sadly, Greta Van Fleet will not play the same day as Robert Plant, as they’ll instead precede The Keys on Saturday. Perhaps most intriguing, Woodstock 69 veterans David Crosby and Country Joe McDonald will play back-to-back sets on The Garden Stage.

The festival’s third and final day promises headlining sets from JAY-Z, Imagine Dragons, and Halsey. The Peace Stage’s lineup is especially impressive, as HOVA will be preceded by Janelle Monáe, Common, Vince Staples, and boygenius. Meanwhile, Cage the Elephant, Courtney Barnett, and Reignwolf will all take The Love Stage prior to Imagine Dragons. The Music Stage lineup is hilariously bonkers, as it promises sets from Brandi Carlile, Earl Sweatshirt, and Pussy Riot. 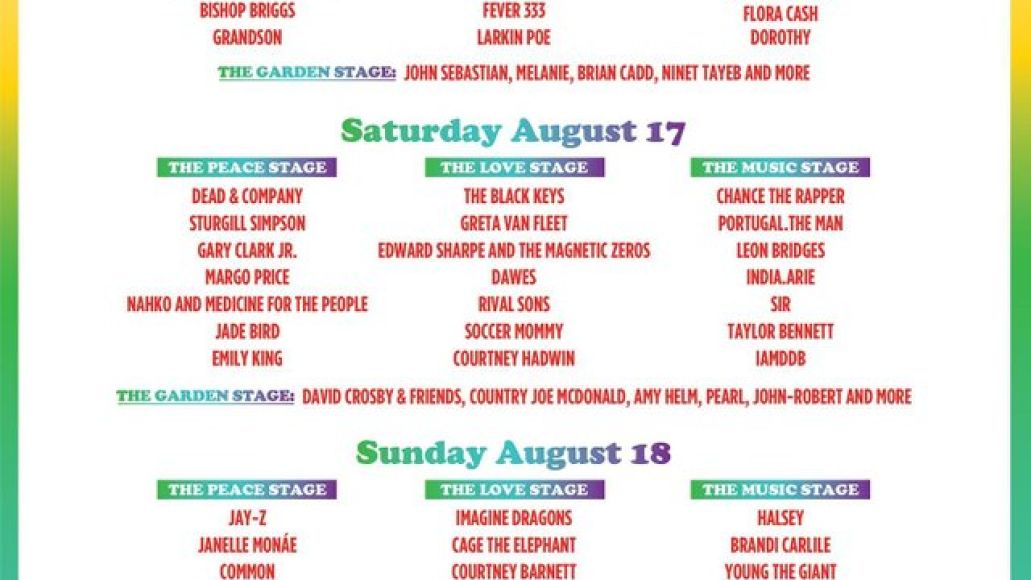