This feature originally ran in April 2015 and will be periodically updated and re-published with the latest Marvel releases.

Welcome to Dissected, where we disassemble a band’s catalog, a director’s filmography, or some other critical pop-culture collection in the abstract. It’s exact science by way of a few beers. This time, we sort through the best and worst of Marvel’s seemingly never-ending cinematic universe.

Have a quick glance at this: 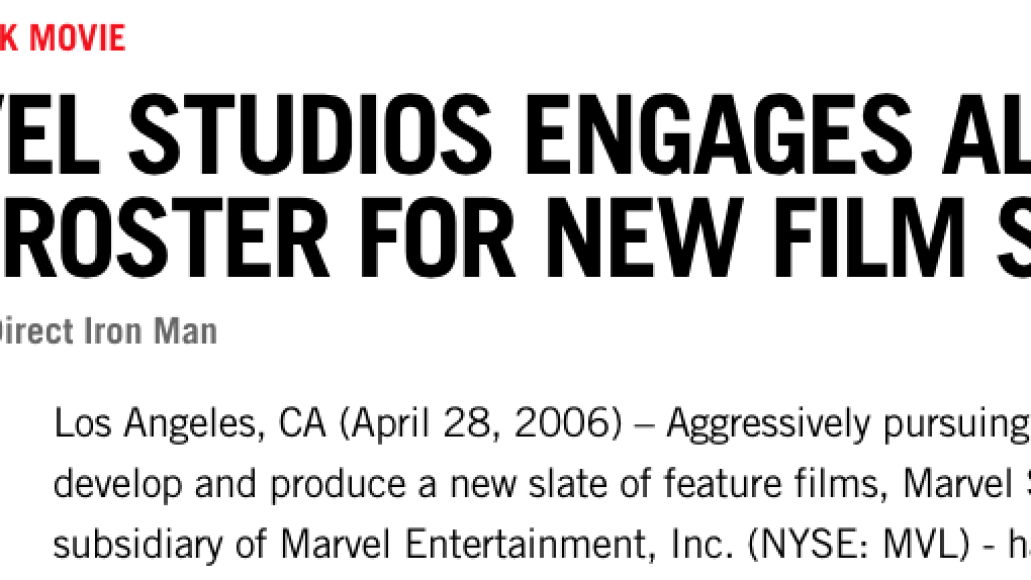 That was April 2006. Now, 13 years later, the outline for Marvel’s ambitious (many at the time said overzealous) plan to take over movie theaters has been made manifest. Under their watch, a movie partially centered around a sassy talking raccoon and a giant tree fighting space evil became one of the highest-grossing films of 2014. In 2008, Robert Downey Jr.’s career was still on the mend, and now he’s one of the biggest and highest-paid movie stars of the current era. Serialized superhero stories on TV are enjoying their biggest-ever boom period for Marvel and others alike, thanks to the brand’s immense success. At this point, the evidence is indisputable that the Marvel Cinematic Universe has permanently changed the way that both Hollywood and movies fundamentally work.

As Avengers: Endgame brings three phases, and the original plan laid out in that post-credit sequence of Iron Man, to their end, we’d like to celebrate this genuinely unparalleled accomplishment. The how and why of Marvel Studios’ gambit working out so well is more complex than some will realize, but one simple explanation is that there’s a certain standard of quality expected from Marvel’s output, one that’s been consistently delivered upon with each production within the Marvel Cinematic Universe. While we obviously like some of the films and shows more than others, there’s not a movie on this list that we could even come close to equating with the worst that your average film critic sees in a given year.

So join us as we dissect what Marvel has accomplished so far by way of the 33 Marvel Cinematic Universe offerings that have been released (theatrically, on TV, or via streaming platforms) as of this publication. Because as we’ve now learned in abundance over the past decade and beyond, there’s more than one way to tell a great superhero story.

Ranking: Every Marvel Movie and TV Show from Worst to Best