The Pitch: The bitch is back. Now in biopic form.

Executive Producer Elton John presents Rocketman, the authoritative Elton John story as approved, guided, and largely enabled by Sir Elton Hercules John CBE. He’s brought to life in vivid, glittery detail by British breakout and sharp young vocalist Taron Egerton. What’s on the album? Peacock headdresses. Epic meltdowns and shouting matches. Audiences left so elated by John’s music that they float in the air. All in the service of depicting John’s pompous and quite-juicy legacy. And why do it any other way?

Rocketman is the most vainglorious take imaginable on the life and times of one of ‘70s rock’s most flamboyant and notorious superstars. Framed as a tongue-in-cheek, mildly hallucinogenic, and frequently musical testimonial from rehab, John recounts the sex, drugs, and rock ‘n’ roll along his road to greatness. There are tales of the tormented genius behind his music, as well as Elton’s anxieties and aspirations at odds. (Almost always from his side, mind you.) He fondly talks up his hits, his flops, his penchant for melodrama, and how hard it’s been to find himself underneath all the substances and sequins. Rocketman captures the rise and explosion of John that marked his 1970s and ‘80s, his most exciting period.

And since this is an Elton John joint, we get the songs. Lots of ‘em. About 20 in all. Mastered by John, executed with aplomb by Egerton and others. Used in all sorts of smashing ways.

(I’m Gonna) Love Me Again: Normally, the notes in a biopic are so repetitive and loud that one wonders what another could add to the mix. Like many, Rocketman has an arc constructed of humble beginnings, massive success, a downward spiral, and the inevitable comeback. But pointing out the familiar beats of the genre is as harsh as we’ll get about it.

It’s a pleasure to report that Rocketman plays the songbook a little differently. It’s colorful, swift, and downright poppy. Rocketman should be considered less as a dramatic re-enactment than as a feat of creative license. And while it’s a vanity project through and through, it’s also one delivered in a distinct key. In short, Elton John seems to want his life to come off like a soap opera.

>We get the ugliest, pettiest bits, covered in rhinestones and foundation. We get the smashed liquor glasses and refusals to leave the bathroom. A suicide attempt is blended with a redemptive underwater fantasy, where a narcotized John has a sing-along with his younger self to the tune of, yes, “Rocket Man”. It’s agreeably narcissistic in the sense that, even when it feels dramatically familiar, the drama is pitched high and the music deliriously.

The gaiety and invention on display in service of John’s discography is strong. Dexter Fletcher – who gained a bit of notoriety picking up as an uncredited director on last year’s Bohemian Rhapsody – works from Lee Hall’s script with a sense of play normally lacking in rockstar biopics. Tabloid’s the word. There’s room for red-lit orgies with piles of bodies that feel like a naughty take on Grease. John’s mother and father are presented as snotty figures who provoked the singer into his desires for love and attention elsewhere. The delivery’s akin to to a Harry Potter installment, with far more cussing and angst. 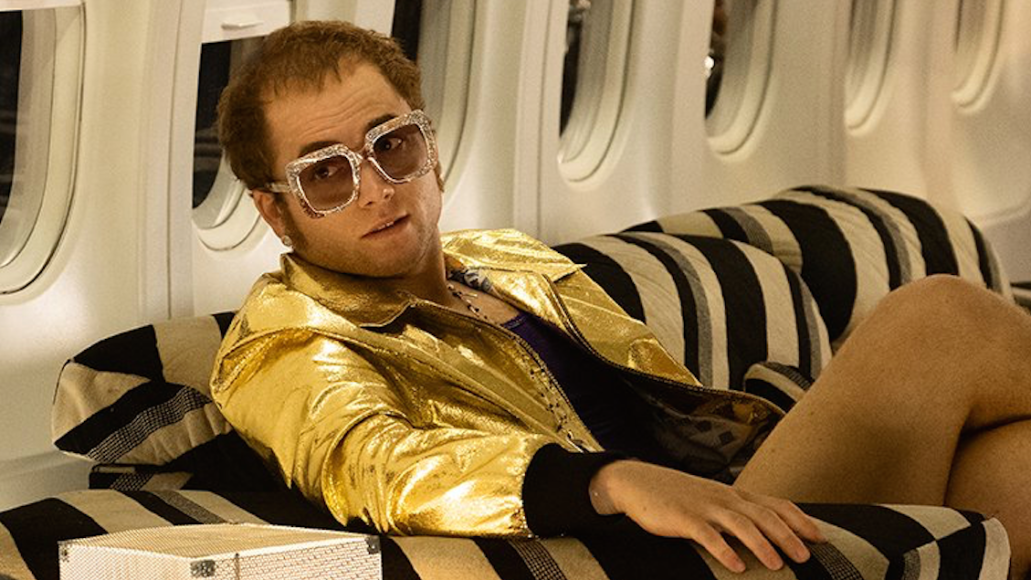 And the sex, my goodness. There’s a healthy helping of intimacy that helps Rocketman feel salacious and honest to the subject. (Bonus points for the well-boasted PR about this film’s willingness to embrace John’s sexuality.) Imagine if you will: Bohemian Rhapsody with an R-rating. Rocketman has the nerve to be a little tawdry, a bit cheeky, and happily adult from end to end. This is a movie about the guy who performed “Madman Across the Water”, after all.

John is fed catty lines and snappy repartee, as he acknowledges and almost seems to brag at times about his many problems: rage, bulimia, sex addiction, and so many et ceteras. Egerton, by way of Hall’s dialogue, gives the litany of sins a smirking acknowledgement. It’s funny, and in line with John’s musical vibe. Egerton gives it his all, turning his portrayal of a musical legend into a breezy pleasure. With a smirk, a pout, and the ability to nicely replicate John’s vocals, the actor’s a get. Egerton conveys the sorrow and flair of a dynamic figure like Elton John, chugging whiskey and expressing delight at the sight of piano keys with equal legitimacy. His comic timing is terrific; watch for his embarrassment at his trendy clothes being thrown out a window by a scorned lover. Egerton invokes a heart attack, snorts cocaine, wears platform boots on a piano. And he can do the musical numbers, too.

Jump Up! Speaking of the musical numbers? Those are the bits of Rocketman to write home about. These are the moments that will get people over the expository necessities, and on board with Rocketman at large. Fletcher and Hall cook up the Cirque Du Soleil of biopics, built around hue-heavy images that actually feel celebratory. Egerton prancing down an alley, into a carnival, and back into the bar in which he started, all to the tune of “Saturday Night’s Alright (For Fighting)”? It’s delicious bubble gum.

Rocketman is packed with stuff like this. Does that seem hyperbolic? His legs turn into jets, firing him into the sky to explode into fireworks. John walks onstage to perfume The Who’s “Pinball Wizard” as an interlude, while digitally spinning around into countless costumes actually used on John’s tours. “I Want Love” is delivered by John’s entire family in elegy. “Tiny Dancer” actually manages to escape Almost Famous for a minute, by embodying John’s inner monologue at a party. In the musicality department, Rocketman seldom misses a beat.

The Verdict: Even if Rocketman is one of those films where you walk in knowing almost exactly what to expect, it still manages to wham, glam, and occasionally elate. As a fable of musical dismay and dreaming, Elton John is a terrific subject for this kind of story, and the artist’s willingness to be seen at so many angles is commendable. And in that regard, Rocketman feels like a key note for the genre. More romanticizing of the music, please! If only more biopics had this kind of wiggle room, or this level of patience to goof around with the audio. This is a vanity project done right; it pops and dresses up an old hat with some much-needed glitz.

Where’s It Playing? Opens wider than a jacket made of feathered devil wings on May 31st. Dance your way to theaters now!