One minute you’re watching Foo Fighters play in front of 40,000 people at Mapfre Stadium in Columbus, Ohio, and the next minute you’re a few miles away at Ace of Cups bar watching hardcore veterans Refused and punk rockers The Distillers tear up an intimate venue.

That’s what happened this past Sunday (May 19th), when high winds and area thunderstorms forced the cancellation of several sets on the last day of the massive Sonic Temple Art + Music Festival. Unfortunately, Refused and The Distillers were among those bands left with nothing but time on their hands.

I had run into Refused singer Dennis Lyxzén earlier in the day at Sonic Temple, telling him it was a real bummer they weren’t going to get a chance to perform, and he was definitely bummed about it, too.

Then, hours later I was side stage at around 8:40 p.m. watching Joan Jett & The Blackhearts after Sonic Temple doors opened again to fans following an early evening weather evacuation. That’s when I got a text from Refused’s management that the band was playing a small club show with The Distillers a few miles away to make up for the nixed festival sets.

(Buy: Tickets to Refused’s Upcoming Tour With The Hives)

Refused would be performing at 11 p.m. and Distillers at midnight. Knowing Foo Fighters were going on at 9 p.m. at Sonic Temple, we knew we’d have to miss the last part of Dave Grohl and company’s set to catch this impromptu club show. So at about 10:40, after the Foos rocked about two-thirds of their set, we headed over to Ace of Cups.

Tickets were $10 each, with proceeds benefitting the Ohio charity Women Have Options. By the time we got there, the place was already filled up with fans who had come from Sonic Temple after seeing notice of the show posted on social media, or area fans who were at home watching the series finale of Game of Thrones and weren’t gonna pass up this once-in-a-lifetime gig.

Just after 11 p.m., Refused took the stage and brought the hardcore, sending the couple hundred people packed in Ace of Cups bar into a frenzy. Within a few minutes, Lyxzén was in the middle of the floor with the fans, a circle formed around him.

Over the course of the set, the Swedish hardcore heroes performed a handful of songs off their classic 1998 album The Shape of Punk to Come, including the title track, “Summerholidays vs. Punk Routine”, and the fan favorite “New Noise”. They also busted out the new song “Blood Red Until I’m Dead”.

Lyxzén also addressed the crowd throughout, talking about social issues and women’s rights, and expressing his pleasure in being able to play this gig after the day started out bleak with their festival set being canceled.

After about a 20-minute set change, Brody Dalle and the rest of The Distillers took the stage, kicking things off with “I Am a Revenant” off 2002’s Sing Sing Death House, and delivering a set heavy on their 2003 album, Coral Fang, including such songs as “Die on a Rope”, “Love Is Paranoid” and the set-closing “Drain the Blood”. Overall, the band played 13 songs, taking a few requests along the way and never relenting as they played into the early hours of the morning.

A day that was a bit of a wash out turned out to be a memorable night for a few hundred fans that packed into Ace of Cups on Sunday night. See our pics and some fan-filmed video clips below.

Photo Gallery: Refused and The Distillers at Ace of Cups (click to enlarge and scroll through): 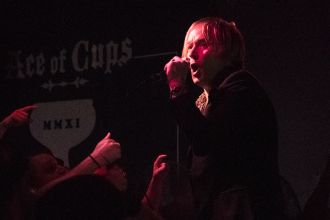 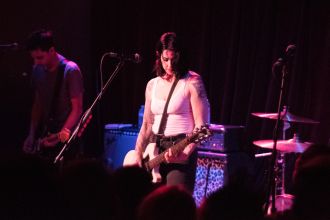 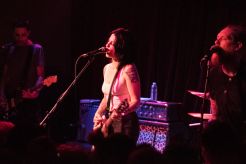 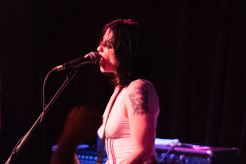 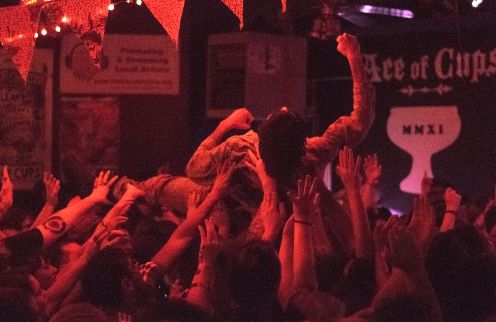 All photos by Oliver Peric