The Pitch: The good guys (so far as there are any good guys in Game of Thrones) are licking their wounds and burying their dead after the Battle of Winterfell. But after a time to mourn, there’s also a time to celebrate, and to start thinking about what tomorrow looks like, now that there is a tomorrow to think about. The first half of “The Last of the Starks” builds that festive atmosphere, one that lets our heroes bask and joke and revel in the afterglow of their victory, before whatever comes next.

What comes next, though, is more goodbyes, more friction, and more plans to firmly and finally take the Iron Throne. After “The Great War” is finished, Daenerys Targaryen (Emilia Clarke) and company want to immediately turn their attention to dethroning Cersei Lannister (Lena Headey) and taking King’s Landing before her enemies have time to regroup. But Sansa (Sophie Turner) and Arya (Maisie Williams) have their doubts over whether she’s fit to rule, while Euron’s (Pilou Asbæk) forces have been lying in wait all this time.

It’s a series of blows from within and without for the Dragon Queen, and a big win for Cersei. It all leads to one last mutual demand for surrender, before both forces retrench around the Iron Throne and await the final battle to decide who’ll rule the Seven Kingdoms once and for all. 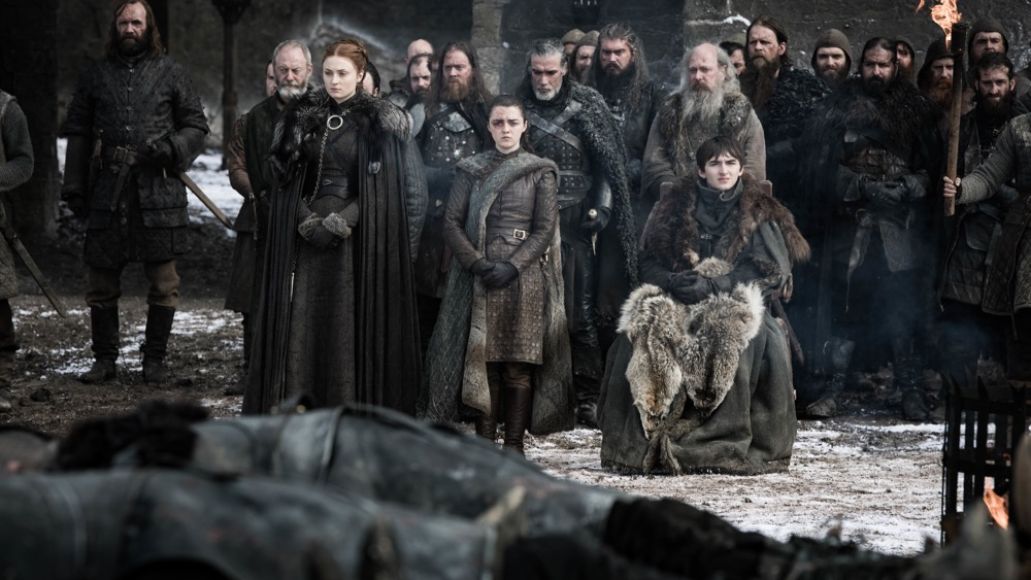 Can’t Hardly Wait … For the Throne: It’s remarkable how Game of Thrones manages to take an initially solemn feast, one that takes place after our heroes commit so many of their fallen brethren to their final resting places, and somehow capture the fun, awkwardness, and occasionally dispiriting atmosphere of a raucous college party to absolute perfection.

The same things you’d expect from a freewheeling kegger in a ’90s frat house comedy are present here: friends playing drinking games and trying to hook up, different vibes ebbing and flowing as various cliques clash and crash into one another, couples devolving into tumultuous relationship drama, and pseudo-philosophical conversations about how things might change after graduation. “The Last of the Starks” has it all.

But those feast scenes also feature some of the most heartening and harrowing moments in an episode with much more explosive events at play. Gendry (Joe Dempsie), having become the Lord of the Stormlands, professes his love to Arya and asks her to be his wife. She lets him down as easily as she can, reaffirming that she isn’t a lady and never has been, in a scene that is both heartbreaking and rousing at once. Instead, Arya partners with The Hound (Rory McCann) once again, off to try to cross one more name off her list. 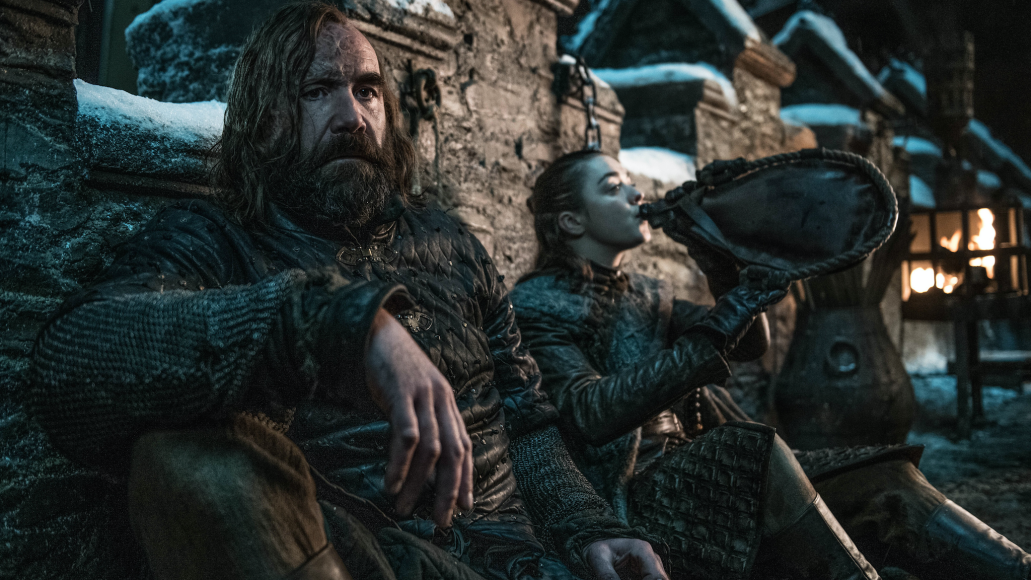 And after years of the most roundabout flirting imaginable, Brienne (Gwendoline Christie) and Jaime (Nikolaj Coster-Waldau) consummate their long-simmering-never-spoken romance. It is the most cheering thing to happen this season and maybe in the series, with the promise of a happily ever after, or what passes for it in Westeros, fleetingly grasped by the two of them.

Of course, this being Game of Thrones, that happy ending’s snatched away from them when Jaime learns what his sister did, and decides that such happy endings are not meant for a man who’s done the things he’s done. He heads back to King’s Landing and devastates poor Brienne in the process.

These scenes, and much lighter ones, are filled with glimpses of messy relationships, uncomfortable reminders of the past and the future, and bits of camaraderie and commiseration. They expertly depict those unmistakable moments when the party is winding down, all your friends are breaking off, and everyone tries to figure out where they fit into whatever’s left.

Loose Lips Sink Dany’s Ships: Like all big parties, the one at Winterfell ends with major rumors being spread. Despite Dany begging him not to, Jon (Kit Harington) confides in Sansa and Arya about his parentage. That leads to Sansa telling Tyrion (Peter Dinklage), who tells Varys (Conleth Hill), and all of a sudden we have a full-blown crisis of faith in our queen-to-be on our hands.

But it’s not just Jon’s bloodline connection to the throne that complicates things. It’s the fact that he might be right for it. Tyrion, Varys, Sansa, and even Dany herself are not just hesitating because Jon is the next Targaryen in the line of succession. They consider changing or pressing their allegiances because the people, at least the people who know him, want to follow him. 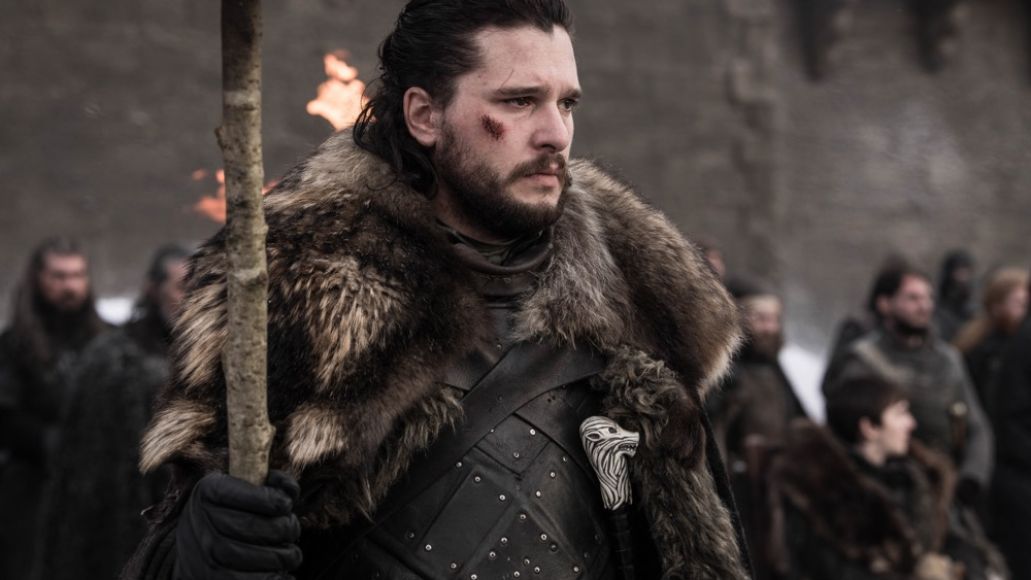 Jon inspires loyalty, and unlike all the other people plotting and scheming for power, he genuinely doesn’t want to sit on the Iron Throne. As Varys notes, in yet another superb throne-adjacent rumination with his impish counterpart, that may be the very thing that makes him perfect for it.

It’s also the thing that makes Jon a threat to the woman he loves, and that worries his family, especially due to his willingness to bend the knee. As Jon marches south towards King’s Landing, Sansa notes that the men of Winterfell haven’t done well in the capitol, particularly when carrying information that could weaken another ambitious ruler’s claim to the throne.

Information is currency, and as the major operators of Westeros admit to one another, when that information reaches the people who don’t know or care about Dany’s adventures on the other side of the Narrow Sea, that secret may change everyone’s lives, whether they want it to or not.

It’s a Mad Mad Mad Mad Queen: That’s not the only reason Daenerys’ advisors are having second thoughts. One of the biggest questions remaining after “The Last of the Starks” is whether Dany will remain patient and wait to starve out Cersei and her allies, or if she will follow in the footsteps of her ancestors and reign fire down upon the city in order to extricate her rival from within it … whatever the cost.

Game of Thrones, and Cersei herself, seem poised to bring out whatever part of The Mad King still lies within Daenerys Targaryen. Cersei invites (or potentially forces) her citizens into the Red Keep, using them as human shields so that if Dany descends on King’s Landing intending to bathe it in flames, she’ll have to kill scores of innocents to do it. 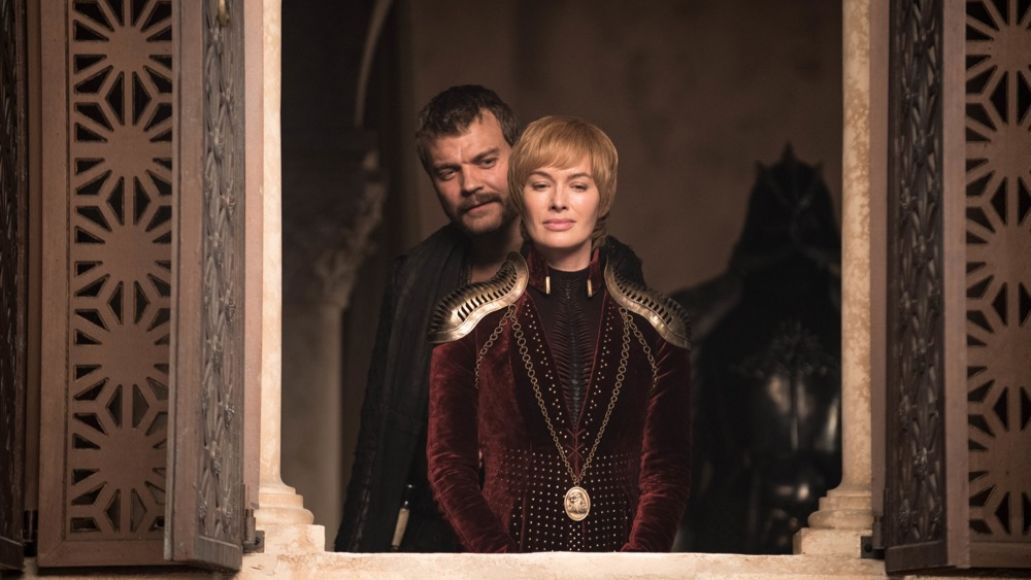 Euron slays Rhaegal, her child, in his ambush, testing whatever bit of mercy remains in a queen who is already chomping at the bit to take what she’s been taught is her destiny and birthright. And in the final moments of the episode, Cersei orders The Mountain to kill Missandei (Nathalie Emmanuel) who, when given the chance to offer her last words, utters only one — “Dracarys.”

It’s the same bit of old Valyrian Dany uttered back in season three, when she freed the Unsullied and Missandei herself by unleashing a torrent of fire upon those that enslaved them. With her dying words, Missandei invites her queen to do the same once more, to shed the advice of her worried counselors and get revenge for her best friend, for her child, and for the father who once threatened, at the peak of his own madness, to do the same.

The Verdict: “The Last of the Starks” is a lumpy outing for Game of Thrones. A half-epilogue for the Battle of Winterfell, half-table setting for the Battle of King’s Landing, and held together by questions of whether Jon Snow or Daenerys Targaryen are the right fit to rule these lands, it’s an episode filled with plenty of fine pieces that don’t always fit together.

Those early scenes have that same warm, if fraught, hangout vibe that the first two episodes of the season did, making the audience glad for the chance to spend time with these characters and say our goodbyes before even more of them meet an untimely end. 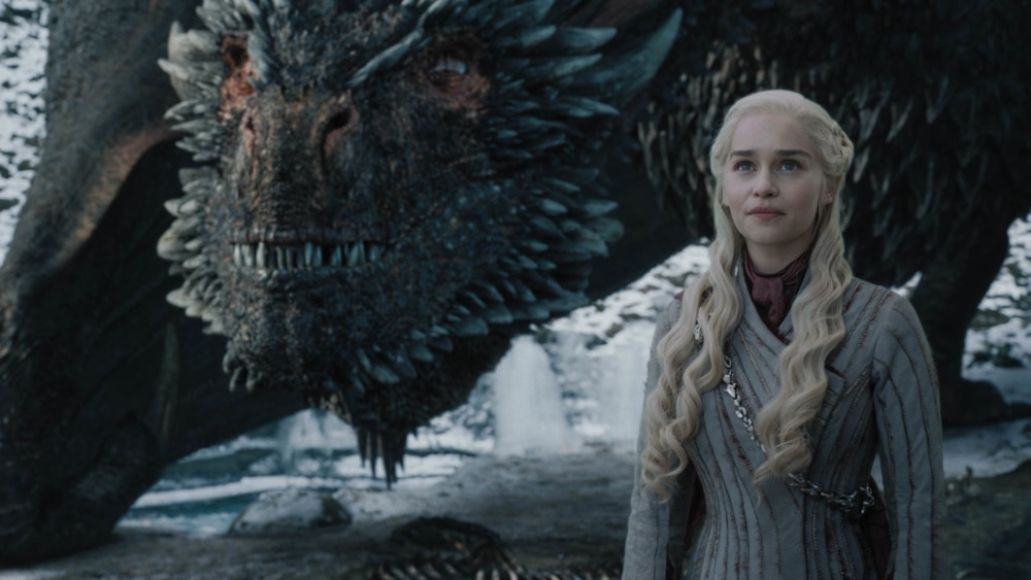 The middle section is full of those high-minded but pointed conversations that ask, but don’t answer, the big questions about leadership and the right to rule that the series has been asking since the beginning.

And the end of “The Last of the Starks” is full of those unwelcome surprises and tense standoffs that keep your heart-pumping in that characteristic Game of Thrones way.

Whether it all amounts to something worth this eight-season wait remains to be seen. But one thing is for sure — as it heads into its final two episodes, Game of Thrones isn’t afraid to test the mettle of hero and villain alike, or to question whether, and when, one might become the other.

–When will the remaining good guys fight Cersei? We’re still banking on it happening in the next episode, unless this whole deal is one big swerve. Expect the aftermath of the Battle of King’s Landing and final struggle for whether Dany, Jon, or some mystery contestant should take the throne to happen in the final episode.

–How do the remaining good guys stack up against Cersei’s forces? When plotting their next move, Dany’s advisors take a number of Dothraki and Unsullied warriors off the board, declaring that the balance between her army and Cersei’s is much more even now. That is, however, before Euron’s army takes out Rhaegal and another big chunk of the Dragon Queen’s fleet. Now, Qyburn rightly points out that Daenerys’ remaining forces are battle-weary, and her last dragon is vulnerable to his spear-shooting contraptions. We’d still bet on Team Dany coming out on top, but the fight just got a lot riskier for her.

–Will Bronn kill Jaime and/or Tyrion? He sure as hell will if he doesn’t end up with Highgarden! Bronn (Jerome Flynn) makes his first appearance since the premiere here, threatening his former employers at the end of a crossbow, but also hedging his bets. We’d expect that hedging to continue, with Bronn taking out one brother and trying to extract a concession from the other.

–Is/Was Cersei pregnant? She seems legitimately moved by Tyrion’s appeal to her love for her children, almost against her will. Whether that’s due to the thought of her unborn child, or of a child who will never be born, remains to be seen. Whatever the answer, she’s still claiming to be pregnant, only now she says that Euron’s the father. (Maybe she can have a joint baby shower with Gilly who, if her prior naming convention holds, will be calling her new child Lil’ Jon. Okay!)

–Are the White Walkers gone for good? The Freefolk are heading back to the North (the real North), so by god, we hope so.

–Who makes it to the end? We lose Missandei and a dragon here, which narrows the field a little, and both Arya and The Hound make fatalistic (if vaguely-worded) declarations about never coming back to Winterfell. Still, we expect most, if not all, of the Starks to make it, especially Sansa, who’s playing grandmaster-level four dimensional chess these days.

–Who will sit on the Iron Throne? Just for a change of pace this week, let’s say Varys. As Tyrion notes, he’s seen multiple kings rule, and as his throwback throne room speech suggests, he has the good of the people in mind. Sure, Varys doesn’t have much of a claim, but that makes him as wheel-breaking and untyrannical a new ruler for the Seven Kingdoms as we can imagine.

TV Review: Game of Thrones Gets Mad and Throws One Hell of a Party in "The Last of the Starks"