America has spoken and have named their Batman. According to a recent survey, American audiences prefer Christian Bale (The Dark Knight Trilogy) to lord over Gotham City. The Academy Award-winning actor inched just ahead of Tim Burton’s go-to Michael Keaton (Batman, Batman Returns).

The Hollywood Reporter and Morning Consult surveyed 2,200 adults for the poll. Bale won the battle based on a percentage of “net favorability.” In other words, anybody who responded “very positively” or “somewhat positively,” minus the negative responses.

Elsewhere, the other Bat-centric poll results are both surprising and not. As far as Batman’s arch-nemesis is concerned, Heath Ledger (The Dark Knight) is the preferred Joker over Jack Nicholson (Batman). Both polled well above Jared Leto (Suicide Squad). 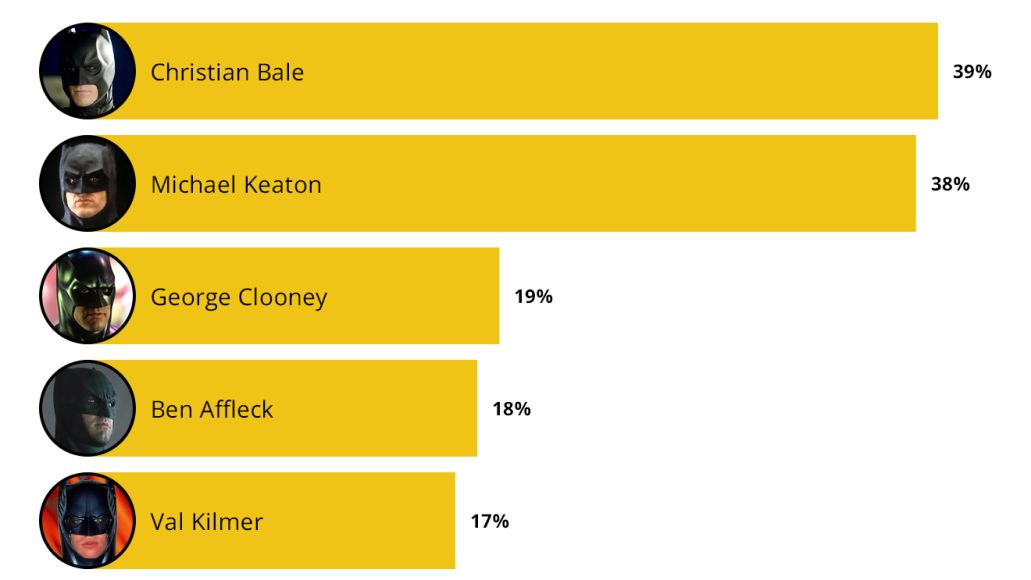 In terms of approval for the upcoming sixth actor to inherit the cape and cowl, Robert Pattinson outranked rumored runner-up Nicholas Hoult with the 18-34 age group polled, while the percentages are closer to even for older audiences.

The one notable outlier involves everyone’s choice for Catwoman. Oddly enough, Halle Berry‘s (Catwoman) net favorability landed slightly above Michelle Pfeiffer‘s (Batman Returns). Ask any fan of the series how they feel about this.

Ask ’em about a basketball scene, while you’re at it…