Michael Roffman (MR): Earlier this year, my friend and colleague Mike Vanderbilt (of Daily Grindhouse) argued that the reason we love and worship Ghostbusters has little to do with the movie, but our childhood memories with The Real Ghostbusters and its epic toy line. He’s not exactly wrong, but he’s also not right. While the cartoon and the toys and the cereal and the lunchboxes and the Ecto Coolers all drew me in as a kid, my obsession was and always has been solely based on aesthetics, and that goes all the way back to Ivan Reitman’s film.

Without crossing the streams with hyperbole — Tobin’s Spirit Guide forbids it — Ghostbusters is the most aesthetically pleasing film of all time. There’s Elmer Bernstein’s score. That sound design. The crunchy effects. The reds. The greens. The purples. The earth tones. It’s a comedy, it’s horror, there’s adventure, there’s romance. New York was still dirty and mysterious. Slobs could still be heroes. Snobs were still villains. The rich were the worst, the poor had the answers. Mick Smiley. The Bus Boys. Did we mention Bernstein already?

Ghostbusters is the essential rewatchable movie. You’re sold on the world within seconds and you fight to savor every one of those seconds by the time Ray Parker Jr. sings us off at the end. I vividly remember as a kid holding on to my VCR, waiting for Slimer to race out from the background, only to rewind it back to the New York Public Library. The idea that it was over was something that never sat well with me, which is why I think the show and its toy line … and eventually its 1989 sequel… all became part of the obsession.

They kept that feeling alive, they kept me in that world.

Ben Kaye (BK): I’ve always thought that world building, as relatively contained as it was, is what made Ghostbusters work so beyond well. Especially recently, after coming across this great video essay arguing that the movie is essentially about nothing from a story perspective, despite being a masterpiece of cinema.

(Oddly, there may be a further argument to be made that Ghostbusters 2 was clearly a redemption story, and yet somehow trying to establish a plot purpose in a world that previously worked so well without such a conceit led to a categorically less solid film. Another time.)

If the movie is essentially without purpose (not without plot, mind you), how can I still love it as a bonafide critic 30 years removed from watching it for the first time? It’s definitely not because of the nostalgia your Grindhouse pal was arguing for, because there are plenty of other nostalgic properties I love that aren’t tattooed on my body. 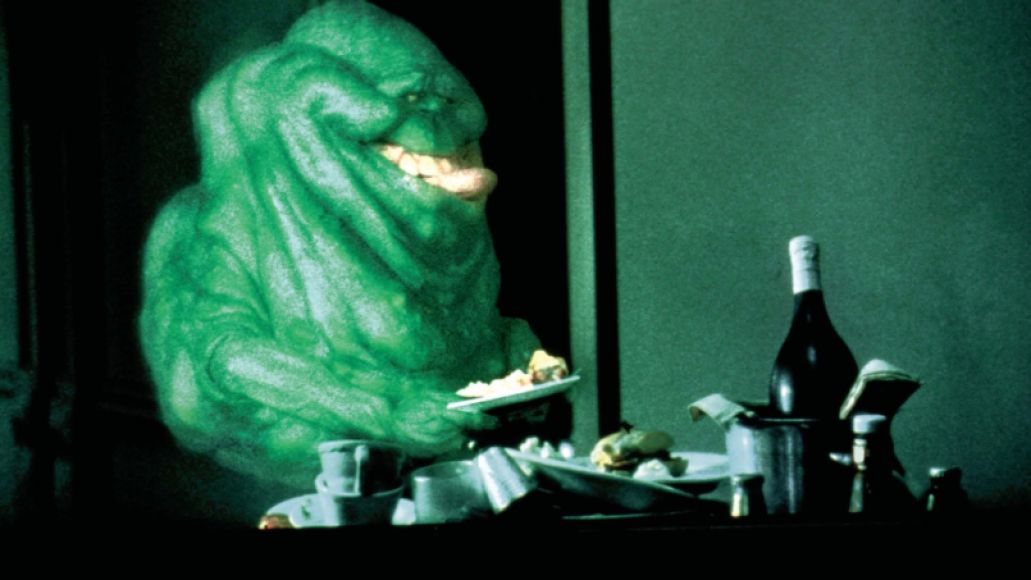 Ghostbusters holds up because it was a wildly original concept (uh, for the most part) that was executed with top to bottom perfection. William Atherton was a caricature of a stuffy beaurocrat as Walter Peck, but he was a perfect caricature. Name a more flawless science dweeb than Egon Spengler. Even the most blue-collar character in the piece, Winston Zeddemore, plays his part as audience bridge to a tee.

Oh, and can we talk about the names for a second? What the hell are these names?! Janine Melnitz, Ray Stantz, Louis Tully, right down to Archbishop Mike and Mayor Lenny — you just don’t get names like this anywhere else. They’re so quintessential to making the movie feel completely of itself, completely real in its own context. Even a classic like “John McCain” sounds like an action movie name; Doctor Peter Venkman sounds like syllables carefully aligned by someone with a distinct appreciation for the musicality of language.

MR: Ah, musicality. That’s an appropriate word for Ghostbusters. Everything moves in this movie, and while that could ostensibly be from all the cocaine that was ostensibly being consumed, it really goes back to the sound design. It’s so lush. It’s so ornate. Try and think back to a single scene that doesn’t have Bernstein’s score, or an ‘80s pop track, or some eclectic industrial noise. It’s like one long ASMR video masked as a comedy. Hell, even when there isn’t music, the players are chewing on dialogue that so often feels like a bunch of improv comics doing free-improv jazz.

That goes tenfold for Bill Murray. Look, it’s not really fair to say this is his movie, but if we’re cracking eggs and putting all the veggies on the counter, this is Bill Murray’s movie. Why the hell do you think it’s taken more than three decades to get another sequel? Ol’ Bill never wanted to do it, and Sony, Dan Aykroyd, Reitman, and even the late Harold Ramis knew it just wouldn’t work without him. That’s because it wouldn’t. Venkman is Ghostbusters, and his shruggy cynicism towards, well, just about everything is the jazz.

Now, before you toss me into an Ecto unit, know that I think the supporting players are also pivotal. An entire movie of strictly Venkman would be exhausting, and we nearly saw that in the 1989 sequel. (That should be a podcast, by the way: “Strictly Venkman”.) You need Aykroyd’s idealism. You need Ramis’ acerbic wit. And you really, really need that blue-collar attitude from Ernie Hudson, whose peripheral role is instrumental in that world-building you mentioned. They’re all checks and balances for each other, which is why this sequel will be intriguing to watch unfold without Ramis. Having said that, their odds are favorable with Murray around.

Ben, is this true? 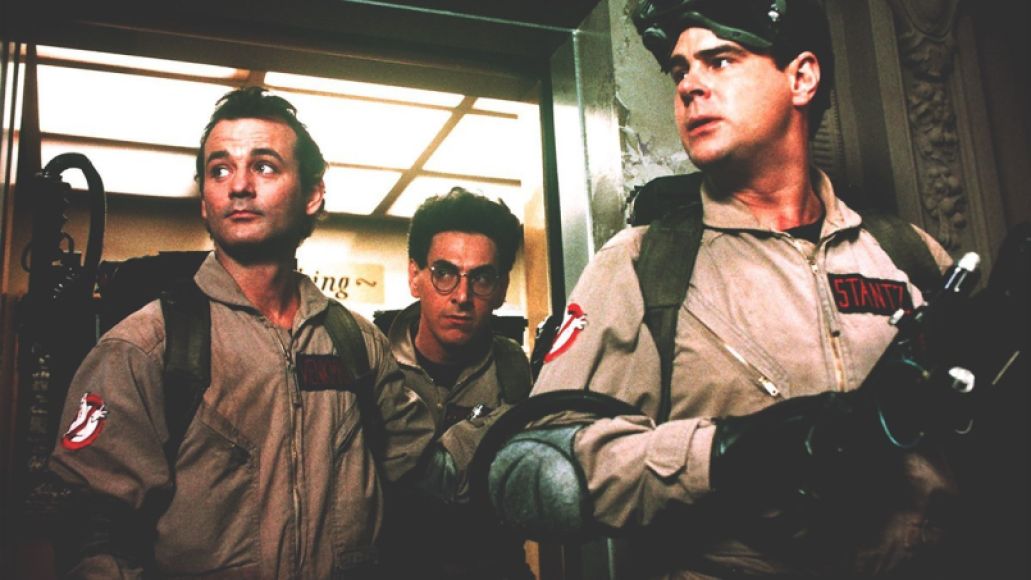 BK: Sure, but I’d also argue that you can’t do it without Aykroyd, “the heart of the Ghostbusters.” Ghostbusters needs a Ray Stantz to balance Peter Venkman’s cynicism; without the other, each would go off the rails. Obviously we’re going to have to see what happens without Ramis (major R.I.P.), but in so many ways GB is DA’s baby. Without him, the players wouldn’t be playing, and the characters wouldn’t be busting heads. Ray’s unwavering belief in his and Egon’s ideas leads him to mortgage his parents house to pay for the startup (everyone has two mortgages these days), his playfulness is why they choose to take the firehouse (what a genius location!), his optimism is why they end up with that beatdown ’59 Cadillac as Ecto-1 (what an iconic ride!).

Oh man, what a classic movie car. I get why the 2016 reboot went with a hearst, but that was so on-the-nose it came off as unoriginal. The Ecto-1 existed for one movie, and yet it’s one of the most indelible vehicles in media history. (GB2 of course upgraded it for the Ecto-1a, but it’s that original design that remains so unforgettable.) That Cadi is so distinctive it’s like a richly drawn tertiary character in and of itself, down to the very wail of the siren.

Which takes us back once more to sound design. There’s a reason that the first clue in the new teaser for the 2020 sequel is the sound of someone trying to start up a proton pack. It’s subtle, warped by ill repair, but it’s unmistakable. And then in comes the aforementioned score, so uniquely spooky and intriguing. It’s not very often that noise is so closely linked to a project like this; the closest you probably get is Star Wars, where the score, the lightsaber sound effects, Vader’s breathing, blast doors, and the like are all incredible familiar. But again — I emphasize this to reiterate the near perfection of the film — Ghostbusters has that all in one (okay two) film(s), not an 11-film franchise.

MR: I don’t know. I … don’t … know. All I know is that whenever those sounds are heard, something ignites from within. Call it love, call it wonder, call it nostalgia. I believe it’s a lot of things. I believe it’s one of many reasons why we call this movie magical. But really, I think it plays into the world-building we’ve been discussing. These sounds aren’t just unmistakable; they add to the realism. You believe the equipment they’re carrying, which is why we all do that Michael Scott face when they first try their proton packs, or toss out the first trap, or cross the streams to take down Gozer. They’re scrappy people working with scrappy things.

Yet that DIY attitude is everything in this movie. Think about that ending. They’ve just given the finger to a dickless government official and they’re surrounded by the people. Christ, what a moment. If that Alessi Brothers song doesn’t get you going, then watching all of New York throw their hands in support absolutely does, particularly that overachieving redhead who keeps shouting, “Alright! Alright!” (Haven’t seen him? Look next time. You’ll never miss him again.) It’s a moment that speaks even louder today given all we’ve seen from the city (see: 9/11), and it’s a moment that Reitman, Aykroyd, and Ramis totally earns given its DIY ethos.

That’s why I don’t necessarily agree with the whole plotless argument. What are the hell are they talking about? It’s a lewd and crude sendup on American capitalism, brimming with all the things we fight for on a daily basis, be it love, or purpose, or Twinkies. It’s also an underdog story in the spiritual sense — and with actual dogs! Terror dogs! (By the way, who else got super confused over the hypersexual elements between Louis Dog and Dana Dog? Woof.) That’s kind of why I love the sequel so much; in the end, whatever they did meant jack shit to the people, the government, everyone. Society also shrugged. Bummer.

Now, Ben, pretend for a moment that I don’t know anything about ectoplasm, inter-dimensional cross rips, or complete particle reversals, and just tell me why I’m still ready to believe. 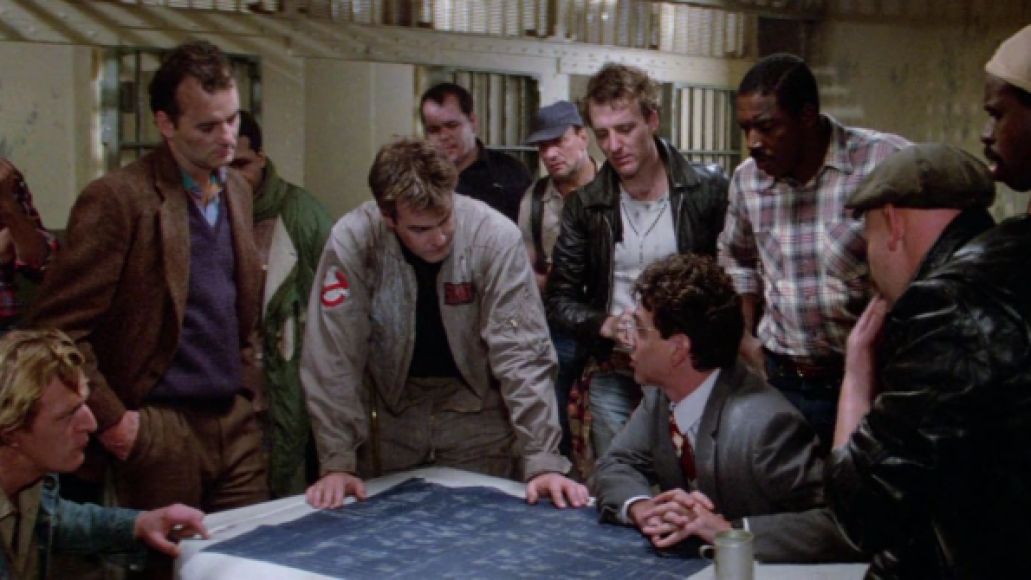 BK: Here’s the thing. I think we could go back and forth a bit on the deconstruction of whether or not Ghostbusters is about anything, but we can agree that there are multiple themes running throughout the film. All of those themes are presented within an inventive, scrappy, weighty world filled with things that feel completely singular, whether it be sounds or music or unlicensed nuclear accelerators.

And that’s why Ghostbusters remains a classic. It works because it’s a ridiculous concept that’s made to feel completely believable, palpable, not by trying to go deep into the realm of sci-fi, but by keeping things relatively practical. It’s a world that feels just a slight shift to the left of the one we inhabit; New York is still New York, the lower classes still have to prove themselves to the bourgeoisie in power, and you still work your ass off for little to no public acknowledgement and wind up singing theme songs at a snotty kids birthday party.

Okay, well, hopefully that last part stays to the movie. But the point remains. Ghostbusters — a movie revolving around capturing. Ghosts. In. lasers. — feels real and singular because of all these aesthetic choices upon which we’ve touched. Not only that, but those choices are just plain neat. The design elements make complete sense within the reality of the film and they simply look cool because of it. The sounds those tools make feel rickety because they should; these are particle colliders made in a debilitated firehouse, they should sound like they’re going to explode at any moment.

It’s not easy to take a concept so completely sci-fi and ground it in a perfectly relatable reality. I don’t know that a movie has ever done it as well as Ghostbusters.

Classic Film Review: Ghostbusters Is the Most Aesthetically Pleasing Movie of All Time