The Pitch: Martin Scorsese’s second Bob Dylan documentary, Rolling Thunder Revue, picks up nearly 10 years after the conclusion of his first, No Direction Home. That first six-hour opus focuses on Dylan’s rapid cultural rise as protest folk singer, electrified poet, and voice of a generation, leading right up to his infamous motorcycle accident, which necessitated his first major departure from both the rock-and-roll spotlight and the increasing demands of a public who saw him more as a prophet than a songwriter. It’s about the ’60s icon that most people associate with the name Bob Dylan. However, Rolling Thunder Revue: A Bob Dylan Story by Martin Scorsese catches up with a very different Dylan, one who has survived his first deadly dance with destiny and fame and has now returned to figure out what comes next. He’s older now, a father, fallible, but somehow no less a visionary, even though the mania surrounding him a decade ago has largely dissipated.

Rolling Thunder begins by depicting a confused, groggy America still waking up disgusted in the aftermath of the Vietnam War. It’s an aimless nation without conviction, so scared of being fooled again that any real search for meaning seems to have been suspended. And just when you think Scorsese might be setting the stage for Dylan to come back and provide the spark the nation so badly needs with his Rolling Thunder Revue, present-day Dylan breaks off the interview. “Nothing … it’s about nothing,” he says, throwing his hands up. “It happened 40 years ago. What do you want to know? That was before I was born.” It should have been apparent by the film’s opening clip — silent footage of a parlor magician making a woman disappear using a painfully botched camera trick — that Dylan wouldn’t stand for that burden. That he’s nobody’s tambourine man, and yet, Rolling Thunder Revue turns out to be just that, the story of a group of the most unlikely people thrown together as they fell under Dylan’s dancing spell. 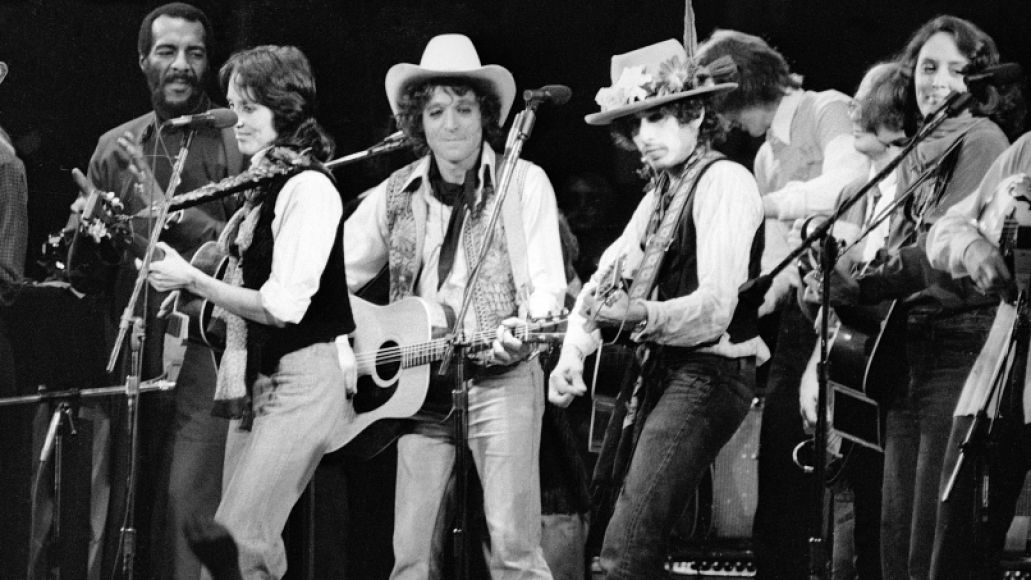 The Cast: In some ways, this really isn’t a Dylan documentary. Oh, Dylan’s driving the bus (quite literally at times), but it’s the gypsy caravan of competing personalities along for the ride who have stories to tell about a short tour that Dylan now describes as having been lost to the “ashes” of time. Those personalities include, in one form or another, famed poet Allen Ginsberg, folk luminaries Joan Baez and Joni Mitchell, Godmother of Punk Patti Smith, Rolling Stone journalist Larry “Ratso” Sloman, mysterious violinist Scarlet Rivera, now-former President Jimmy Carter, actor and playwright Sam Shepard, falsely convicted heavyweight fighter Ruben Carter, and a young Sharon Stone in a KISS shirt.

Each comes to Dylan and the Rolling Thunder Revue in search of something and seems to leave with the very thing needed. Sloman finds the conviction to tell the story he knows his readers care about, Mitchell summons the courage to abandon her hits and try new material live, and Jimmy Carter draws succor from Dylan’s words as he considers the challenges facing the country he’ll one day lead. In the case of Ruben Carter, Dylan’s song “Hurricane” brought renewed attention to the prisoner’s plight and helped him eventually get released.

Ginsberg, according to his tour companions, dreamed of trading the quiet life of a poet for the excitement of being a rock star. “I saw the best minds of my generation destroyed by madness,” recites Dylan, not understanding how a man who’s written one of the most indelible lines in modern poetry can question his place in the country’s cultural landscape. By tour’s end, Ginsberg explains that while they fell short of “recovering America,” he believes the communal nature of the tour gave hope to audiences seeking semblances of community. In Baez’s case, she and Dylan seem to bury an unspoken hatchet and move forward. In a tender moment turned silly, the ex-lovers explain why they married who they loved or thought loved them. “Thinking will fuck you up,” extols Dylan half-seriously. “It’s heart, not head.” 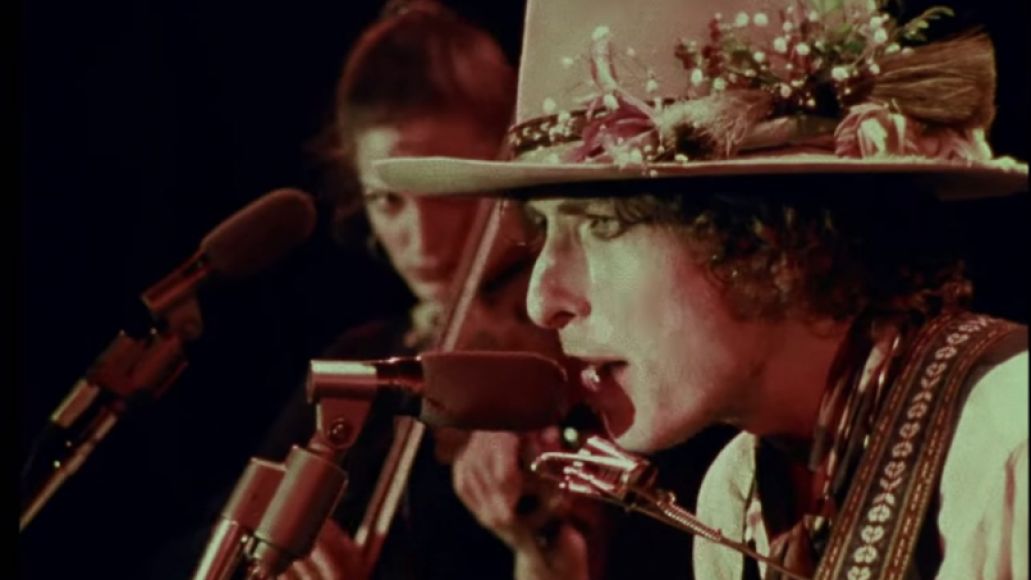 The Music: Nobody can question Scorsese’s taste in music or ability to pair it with film. Here, he employs a soft touch to the footage corresponding to several recordings with which Dylan fans have long been familiar. He cuts away from the performance only when necessary and allows several to play out in full drama. So, in addition to greatest hits like “I Shall Be Released” and “Knockin’ on Heaven’s Door”, the latter of which provides the film with a musical denouement of sorts, Scorsese permits Dylan time to play through a haunting “One More Cup of Coffee (Valley Below)” and summon thunder with his harmonica on a righteous version of the mystical “Isis” that captures Dylan storming around the stage and barking lightning.

As fans of these recordings know, Dylan, backed by names as legendary as Mick Ronson, Roger McGuinn, and T-Bone Burnett, has never been more locked in and animated as a performer, nor has he had a band more capable of turning his old folk songs into rolling storms of rain, lightning, and thunder claps. Dylan bounces about on the now-rollicking “It Ain’t Me Babe”, gathers light stoically as he shifts from whisper to pained wail during “Simple Twist of Fate” from a stool center stage, and sounds like he’s actually shouting down a warning from a mountaintop on the roaring “A Hard Rain’s A-Gonna Fall”. In one of his most intense performances ever, Dylan falls into a trance while barking the lyrics to “Hurricane”, only coming out of the spell to shoot daggers stage left with his eyes that barely miss Scarlet Rivera, whose violin sounds like a wailing siren on a hot urban summer night. Had Scorsese done nothing but finally find these performances a coherent home, Rolling Thunder would have done a great service to Dylan fans.

Seeing the concert footage in such high quality is simply stunning, and Dylan has never been more charismatic or unpredictable in front of a camera. As he takes you through songs, it’s easy to get enamored by, say, the way light shines brightly off his guitar, the peacock feather in his hat, or the worn knees of his bluejeans. Dylan himself appears a work of art: blue stained-glass eyes beneath the brim of his floral-decorated hat, thick mascara acting as a border between the white of his eyes and the white Kabuki makeup smeared across his face like a mask, the pasty color running south with sweat until it hits the bandanna sloppily tied around his neck. If the checkered suits, wild hair, and shades of his youth made Dylan look like one cool cat, his gypsy ensemble makes him look as though he fits in everywhere and nowhere all at once.

(Don’t Look Back: Seeing the Real Bob Dylan at Last?)

Backstage: Like D.A. Pennebaker’s groundbreaking Dont Look Back, much of the footage from Rolling Thunder finds Dylan and companions backstage, on the bus between gigs, and generally killing time between performances in less than glamorous fashion. It’s these moments, along with contemporary interviews, that flesh out the experience to create more than just a concert film. They’re also damn entertaining. Sharon Stone, for instance, recalls how she swooned as Dylan played a song that he wrote for her on an old, abandoned piano backstage. She laughs at how her bubble burst when a member of the crew finally clued her in that “Just Like a Woman” had been written a decade ago. Baez remembers that one of her favorite pastimes was impersonating Dylan in full gypsy costume and fooling catering with her nasally impression.

On a more poignant note, Scorsese allows us to see beautiful extended footage of Dylan and Ginsberg visiting Jack Kerouac’s grave in Lowell, Massachusetts. We also see Dylan meet Ruben Carter in person and the fervor with which Dylan and his representation negotiate the chance to put out a single that could stir sentiment for Carter’s plight. In footage captured from an interview years later, Carter sheds light on how he sees Dylan. The now-free ex-heavyweight describes the songwriter as someone who must always be searching for the next thing that sparks his passions. Carters tells his interviewer that in subsequent meetings over the years, he always begins by asking Dylan what he’s searching for next. Dylan, of course, insists he has no idea why Carter keeps asking him that. 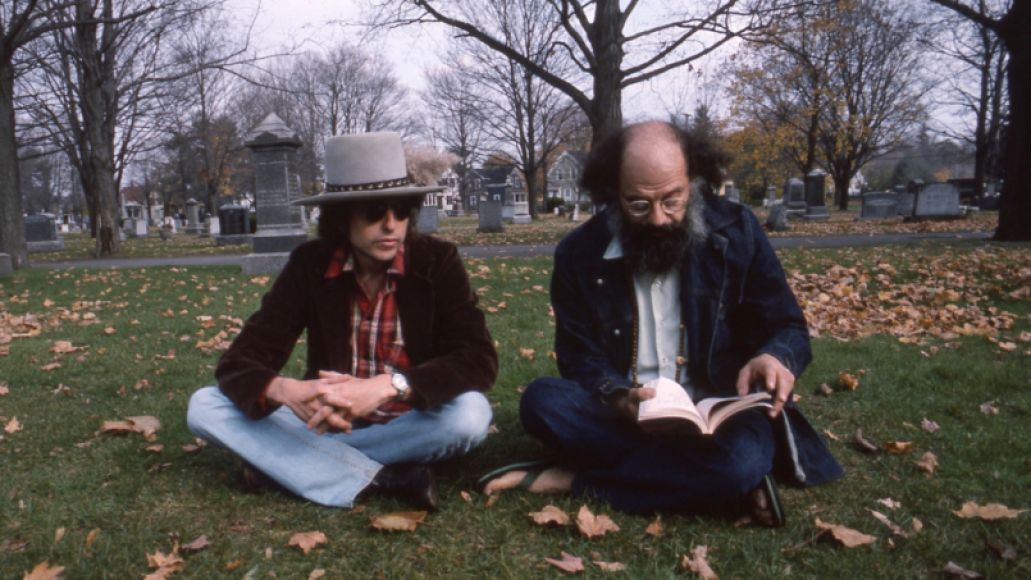 Bad Weather for the Fair-Weather: Make no mistake. Rolling Thunder Revue rolls like a film for Dylan fans made by a Dylan fan. Scorsese, while tackling a subject who was very much still a rock star in the mid-’70s, takes a deep, esoteric look at a Dylan already light years removed from the ’60s icon that the general public associate with his name. This is a movie equal parts documentary and concert film about a tour that the public knows nothing about but Dylan fans have been fascinated with for decades, either since attending a show, stumbling upon the recordings, or trying to make sense of four hours of Renaldo and Clara. For all the uncut musical performances, Scorsese keeps it relatively tight at a whopping two hours and twenty-two minutes. The celebs involved and new interviews also prevent the film from getting heavy as a bottle of bread. That said, unless you are a Dylan diehard, it’s difficult to imagine you not tapping out during the first extended performance. For Dylan devotees, Scorsese has given them the gift of compiling so many artifacts — plus some never-before-seen gems — in one place. It’s disappointing that Dylan himself didn’t shed more light on the concept behind the tour, but seeking transparency from Bob Dylan only leads to dead ends and riddles.

The Verdict: As Scorsese’s film stretches past the two-hour mark, viewers may begin to suspect that they are the audience Mark Twain suggested be prosecuted, banished, or shot in his opening note to The Adventures of Huckleberry Finn. That is, guilty of trying to derive meaning where one shouldn’t. “Life isn’t about finding yourself … or finding anything,” Dylan states with conviction. “Life is about creating yourself.” It’s a line that smacks of “he not busy being born is being dying,” where being born is an action we take rather than something thrust upon us. Now, why Dylan’s latest creation took on the circus-like caravan form of the Rolling Thunder Revue is still anyone’s guess. But to all these years later see Allen Ginsberg “dance beneath the diamond sky with one hand waving free”; Ruben “The Hurricane” Carter “facing no fences but for the sky”; and Dylan helming that “magic swirling ship” reminds us that not all beautiful, life-altering moments can be pinned down neatly. Both Dylan and Scorsese cast a spell in Rolling Thunder Revue, one that Dylan fans will gratefully fall under.