This weekend, Bonnaroo returns to its home at the Farm in Manchester, Tennessee. Started in 2002, for almost two decades, the multiday camping event has served as a pillar of festival culture and, by extension, pop culture today.

The festival is currently on track to sell out, making 2019 one of its most successful iterations in years. Bonnaroo’s evolution has been much-discussed over the past few summers, and normally the conversation has taken a negative slant. After the historically low ticket sales of 2016 and lukewarm critical reception (like our own decision to decline coverage in 2018) in the years following, the event is bouncing back.

In many ways, this year’s lineup is a return to classic form, with jam favorites Phish headlining for three sets and a staging of the Grand Ole Opry kicking off the festival on Thursday night. This, plus the inclusion of Americana acts like The National, The Avett Brothers, Kacey Musgraves, John Prine, The Lumineers, and Brandi Carlile, shows a festival reflecting on its past successes and reaping the rewards.

However, that’s not to say that more mainstream pop and hip-hop artists aren’t represented, because they are with heavy-hitters like Childish Gambino, Post Malone, Cardi B, Odesza, Solange, and BROCKHAMPTON similarly topping the bill. In contrast to the past few lineups that leaned (arguably) too heavily into newer acts, ‘Roo 2019 has struck a balance with an eclectic mix that embraces the best of both worlds.

A Return to Roots (Pun Intended) 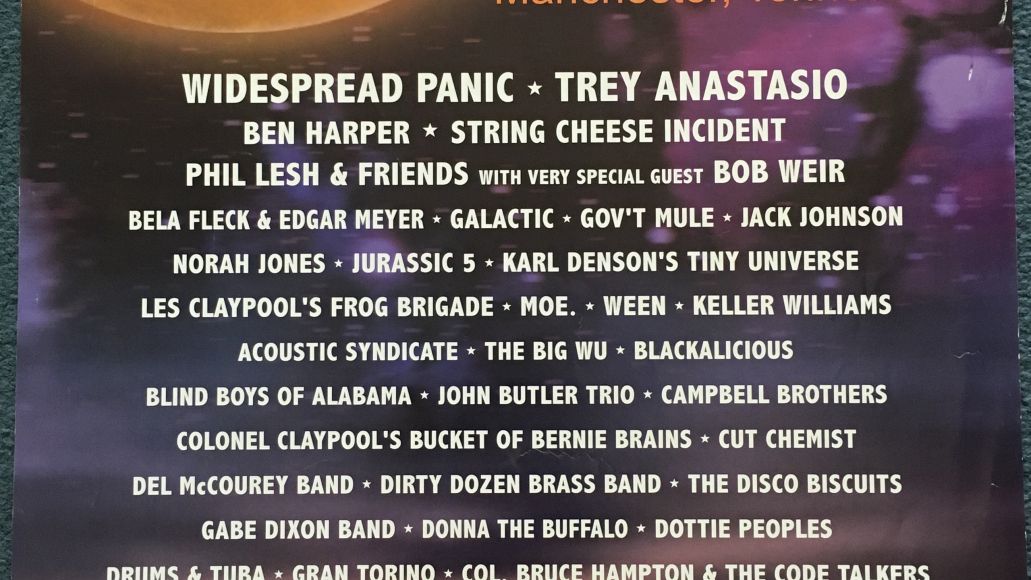 Seventeen years ago, Bonnaroo was a starkly different event than it is today. When AC Entertainment and Superfly first established the festival in 2002, it was widely thought of exclusively as a “jam band” festival. With classic jam and roots acts like Widespread Panic, Phish’s Trey Anastasio, String Cheese Incident, the Grateful Dead’s Phil Lesh and Bob Weir, Gov’t Mule, Jack Johnson, and Béla Fleck heading the inaugural lineup, the association was more or less inevitable.

The festival organizers continued to tap high-profile jam acts, with The Allman Brothers Band, The Dead, and Dave Matthews serving as headliners from 2003 to 2005 alongside other bands from its first edition. However, those versions also saw Bonnaroo beginning to diversify with rock and funk legacy acts like Neil Young & Crazy Horse, James Brown, Bob Dylan, and David Byrne, all of whom have major crossover appeal within the jam band community.

Despite relatively little recognition from outside the genre in those fledgling years, Bonnaroo flourished. Its first two installments sold out without the use of any traditional marketing, the festival instead earning a grassroots following through the jam community. And while it’s quite the feat, it’s really not surprising. Jam band fans have always been known as the most dedicated purveyors of live music — name another genre whose fans are known for living on tour to hear the same songs night after night.

Annabel Lukins — who put together the first year’s official CD sampler, ran the Sonic Stage for over a decade, and has continued to work with the festival as an artist liaison — elaborated: “Jam band fans were rampant back in the day, and we were all looking for a place to go. We need a place to go see music, because that’s what we do — we see music. Back then, Bonnaroo had all the big names, so we all used to go every year. It was the first big festival of its kind. It was like a pilgrimage.”

She adds, “There’s no doubt that jam bands helped strengthen the Bonnaroo community. Jam band fans are all about community, and they brought that sense of community to the festival.” 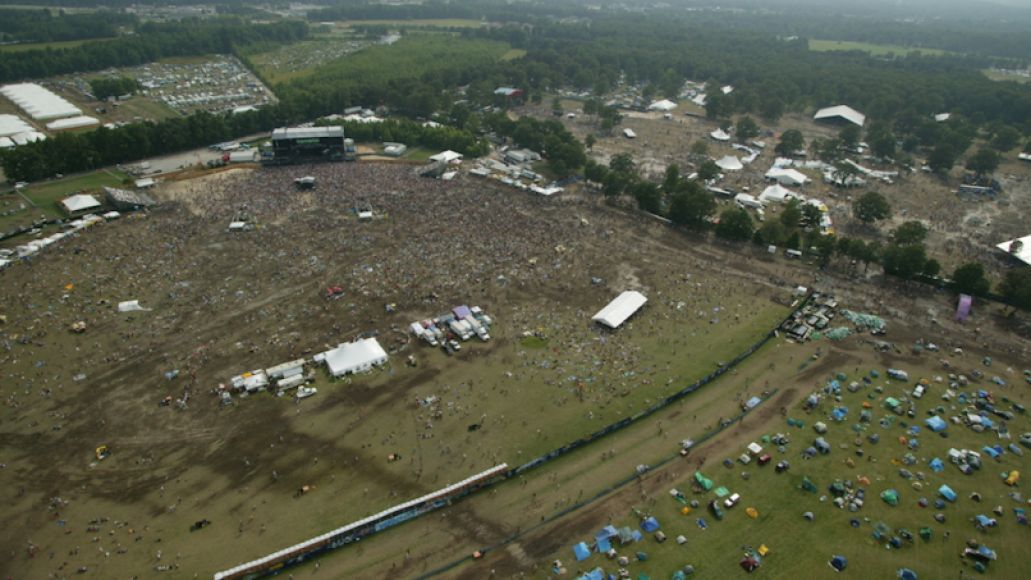 Bonnaroo in 2004, photo by Doug Mason

However, Ashley Capps, founder of AC Entertainment, pushes back on the idea that Bonnaroo first set out to be a jam-oriented festival. He explains:

“From the very beginning, the team was really passionate about music in general and all kinds of different music. We all wanted to create an amazing music festival, but we were never focused on a particular kind of music festival. We started out with a jam band base, but I don’t think any of us really thought of jam bands as a genre. For us, it was an attitude toward making music. It was very broad and open, where the bands were very influenced by all different types of music: bluegrass, rock, blues, folk, different kinds of international music, jazz. There were already so many different musical genres that so-called ‘jam bands’ were drawing upon to create the music that they loved.

They also had this real spirit of performance. Each night was different. They had very music-loving fan bases, not just of casual concertgoers, but people who were deeply into the bands that they loved. They were really tuned into the moment and to the shifting nuances of how the music was performed. All of those things — the influences, the passionate fans, the performances — gave us a lot to build on from the very beginning.”

Many of these features remain true for ‘Roo today, albeit manifesting in different forms. Rather than artists who draw on a plethora of disparate influences during an individual set, that same diversity is showcased through the wide range of genres offered across the festival’s four days. And while many of the fans who attended the early years have gotten older and “grown up” in the last two decades, juggling full-time jobs and families, the festival continues to appeal to music-loving fans who openly take advantage of Bonnaroo’s full range of musical offerings.

It seems like no coincidence that the success of this year’s festival is due, in part at least, to Bonnaroo eschewing the more standard contemporary lineups of recent years. Instead, the emphasis on varied genres, including those foundational to the festival since its earliest incarnations, has reaffirmed its identity as stalwarts of diversity over mainstream popularity.

Nowadays, festival culture is a mainstay of the culture at large. Influencers thrive at events like Coachella, going so far as to fake attending to boost followers and be “seen,” while brands boast catalogs dedicated to “festival” wear. As Lukins succinctly put it, “There’s another festival happening every weekend. They’re a dime a dozen.” However, this was not always the case. Rather, Bonnaroo cemented itself in history as being a forefather of the modern festivals we know today.

“It’s hard to remember this now, but back when Bonnaroo launched, there were very few festivals in the United States, especially camping festivals. Most of the big rock festivals had been a disaster of some sort or another. Right before we started, you had Woodstock ’99 very fresh in everybody’s memory, which was just a horrifying experience. There were successful bluegrass festivals all over the country — people tend to forget about that — but they were a lot more low key than your typical rock festival. There were things like New Orleans Jazz and Heritage Festival, which has been amazing for a long, long time, but, for the most part, most people thought that festivals were not a good idea.”

With few models to draw on, Jazz Fest served as one of the templates for Bonnaroo in the beginning. The heads of Superfly, which was started in New Orleans after three of its four founders attended Tulane together, had seen firsthand the success of the historic event, which inevitably helped shape their idea of what a festival could be. In fact, the name “Bonnaroo” is a nod to New Orleans and its favorite son, the late and great Dr. John, who passed away just last week. Noted Lukins, “The connection to New Orleans runs deep. Outside of some of the founders finding a home in the city, ‘Bonnaroo’ means ‘good times’ in Creole, and they got the name from Dr. John and his mid-‘70s album Desitively Bonnaroo. Dr. John’s sound was really synonymous with New Orleans, and in a lot of ways, he was the soul of the festival.”

However, while Jazz Fest helped shaped the vibe of Bonnaroo from the start, it’s a far cry from what we think of most camping music festivals today. Instead, the Bonnaroo team also drew inspiration from this year’s returning headliners, Phish, who had been successfully hosting annual camping festivals since 1996’s Clifford Ball. In addition to proving the strength of jam band fans when they get behind an event, Phish’s hiatus in 2000 laid the groundwork to help Bonnaroo come to fruition.

Historically, when a major jam act disbands, it leaves a lot of lost jam band fans in the wreckage. When Jerry Garcia died and the Grateful Dead broke up in the mid-‘90s, many Deadheads jumped over to Phish to continue touring. During Phish’s first break, which spanned from 2000 to 2002, again, fans started searching out new summer plans. To an extent, Bonnaroo’s first year took advantage of this opening, tapping Phish frontman Trey Anastasio’s solo project to headline the festival alongside other touring bands that Phish fans had migrated to, such as Grateful Dead spin-off Phil Lesh & Friends, String Cheese Incident, Widespread Panic, Gov’t Mule, moe., the Disco Biscuits, and Umphrey’s McGee.

Besides bringing together the newly crowned heavy hitters of the jam band scene, the festival took cues from Phish’s pioneering presence on the Internet. When the World Wide Web was still in its fledgling incarnations, the Vermont quartet took full advantage of the medium, using it to directly communicate with fans, build fan communities, and support their touring. In turn, ‘Roo’s success in those first few years sans traditional marketing came, in part, from continued buzz generated online.

“By the time we actually got around to launching Bonnaroo, Phish was on hiatus, which enabled us to tap into their team. The people who had helped Phish create their festivals became the key leaders in helping us launch Bonnaroo, not only in the first year but in the first several years. They gave us a base of expertise that certainly was one of the key ingredients to our success in that first year — and I’m talking about nuts-and-bolts, operational things like the logistics of setting a festival up on the scale of Bonnaroo.”

Of course, Phish’s association with Bonnaroo extends outside the time of their first hiatus. While the members’ various side projects have always found a home at Bonnaroo, this year, the group returns to headline the festival for the third time. In 2009, the jam act debuted at the festival, making Bonnaroo one of their first stops after coming back from a second hiatus started in 2004. The band followed up their inaugural performance in 2012, when they served as headliners for the event’s most successful year to date with a staggering 100,000 people in attendance.

Phishing for a Future: The Strange Evolution of Bonnaroo