The Lowdown: Introspective Australian musician Angie McMahon made a powerful impression during her March visit to SXSW in Austin, winning one of the festival’s three Grulke Prizes. During that festival, she performed many of the tracks that now appear on her beautiful and bruising debut album, Salt. In a live setting, McMahon is stunning and commanding, pushing and pulling with silence as much with her voice as she does with her instruments. While that feeling doesn’t exactly translate to a recording, Salt offers a different interpretation of her material, one that’s rather unique.

The Good: Salt exhibits McMahon’s lyrical prowess time and time again. On “Soon”, a deceptively simple early album reflection on heartbreak, she admits, “I’ve been hiding my tears from my mother.” The reason, the singer says, is that “she and my father still laugh together, see.” Her language is often direct like this, but especially on “Pasta”, perhaps the most relatable song of 2019. “I’ve been lost,” she spirals almost compulsively into repetition, before asking, “How am I simultaneously on top of someone’s pedestal and also underneath someone else’s shoe?”

These truths aren’t always easy to hear. Such is the case on “I Am a Woman”, arguably the most powerful song of the collection. On a literal level, McMahon’s delivery is at its most oblique and the words are hard to decipher. But, then there’s the subject material: the few spare words about men who think of women as games, how it hurts to talk while bleeding, and what it’s like to have to teach while you’re still learning. The final minute revolves around this kind of existential aching, as she howls again and again, “You are in my home now, and I am a woman.”

The song — and really, all of Salt — truly captures what it feels like to be a bright and overwhelmed woman. More specifically, a woman who’s grasping for something steady in the darkness, while also leaning on the lingering notion that she might be wise enough to survive without any lights on at all. 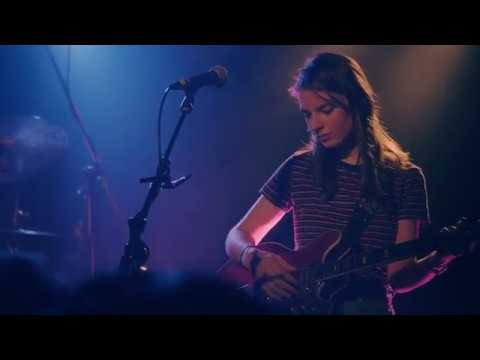 The Bad: Salt, as we critics love to say, “rewards multiple listens.” This is traditionally a backhanded compliment, suggestive of faults. In this case, however, it means that if you play Salt when your energy is high, or you’re with a friend, or you’re not particularly focused on the mood and the words (perhaps, as in my case, you’re afraid of confronting this type of mood and these type of words), you might brush the album off altogether. After all, there are few easy hooks, almost no earworms, McMahon’s delivery is wrenching, and she almost never lets her electric guitar really rip. So, these things might not be appealing all the time. But nothing is everything to everyone. Read on…

The Verdict: Salt feels like we’re watching McMahon perform surgery on herself. On “Keeping Time,” she sings, “All the ways we can bruise are of use to us/ All the things I have burnt, I have learnt their cost/ And oh there’s cracks in me/ Oh the cracks in me.” On tracks such as “Push” and “Soon”, she expends every ounce of energy and every bit of breath in her lungs just to push out her words. It’s as if she’s looking down, examining her internal organs, and making these discoveries in real-time. The result, if you are willing to engage and get just as vulnerable, is unforgettable. For those who are feeling lost and needing to really listen, Salt will speak loud, and McMahon’s music will remain a steadfast and spectral companion for a very long time.