The following exclusive excerpt comes from Drew Fortune’s collection of interviews: No Encore!: Musicians Reveal Their Weirdest, Wildest, Most Embarrassing Gigs. You can pick up a copy here.

Before becoming a reality TV gadfly, Dave Navarro was alternative excess personified. From his early years as guitarist in Jane’s Addiction, through a short stint in Red Hot Chili Peppers, Navarro was the elegantly wasted, darkly sexual pin-up for the doom generation, with a penchant for heroin syringe art.

Dave Navarro: You’ll have to forgive me, because my memory of the drug days is a little blurry. Back in 1997, Jane’s Addiction was on tour, and we were playing the KROQ Almost Acoustic Christmas show. It was at the Universal Amphitheater, and it was the height of my drug addiction. I was shooting up heroin and cocaine on a daily basis. I’ve done tons of tours completely sober since then, but back then, I was really, really deep in it. That entire tour, I was pretty out of my mind. I was somehow able to not fall down on stage, but before or after, or sometimes during, I was shooting. I was legitimately the member who couldn’t be found. Nobody knew where I was. I would shoot a ton of coke, then do the heroin to come down. Or, I would speedball, so I had an option. [Laughs]

I could be really up or down. The thing about shooting cocaine is there’s a big rush, and then it wears off relatively quickly, so you end up shooting a lot. With the speedball, one shot will get you through a couple hours easily. There were many times during the 1997 tour where I had five or six syringes set up and ready to go off the side of the stage. In-between songs, I would reapply. It was no secret to the band members, but I don’t think the audience was aware. I’d wait for Perry [Farrell] to talk to the audience, or a change in the production, to duck behind the guitar tech and gear station to fix. I’d only get a few minutes, and I hate to say it, but I got really good at doing it quickly.

Anyway, back to the Acoustic Christmas show. For shows like that, there’s a number of different artists playing, which is usually somewhere around 10 bands. Fiona Apple was playing, and she was breaking as a huge act. It was the height of Fiona mania. I was a fan, and I also had this distant crush on her. I had never met her, but I was really psyched to be playing the same bill with her. I got to the venue early for sound check, and with multiple bands on the bill, you sound check and then wait around all day. What’s a junkie gonna do all day long but shoot coke and heroin? The process of shooting up involves inserting the needle into the vein, and pulling back a little bit on the plunger to make sure you’ve hit the vein. A little blood rushes into the syringe, and then you know you’re good. If you miss the vein, you’re gonna run into problems and really injure yourself.

I developed a system where I would extract blood without anything in the syringe. I’d spike the vein, and pull out a syringe full of blood, which led to loads of fun over the years. [Laughs] In the midst of my insanity, I thought it would be a very romantic gesture to go into Fiona Apple’s dressing room, and write a message on her wall in my own blood. In my deranged head, I viewed it as sending her a message with the blood that pumps through my heart to her. It was my life blood that I was symbolically sharing. I thought we would relate on multiple levels, because we’re both passionate musicians and artists. In my head, it was a grand, romantic statement, that she would find very touching.

She hadn’t arrived at the venue yet, so I snuck into her dressing room and began to extract blood out of my arm. With the syringe, you can aim it and basically paint with it. You can write words, and it was a technique that I had perfected over the years. There was no innuendo or poetry in the message I wrote her. It just read, “Dear Fiona, I hope you have a great time tonight. Love Dave.” That was it. It wasn’t too over the top. In my coke-addled brain, it was a very subtle, kind, romantic gesture. I saw us riding off into the sunset, with this gesture being the basis for our romance. As it turned out, the management and staff at the Universal Amphitheater didn’t see it the way I saw it. 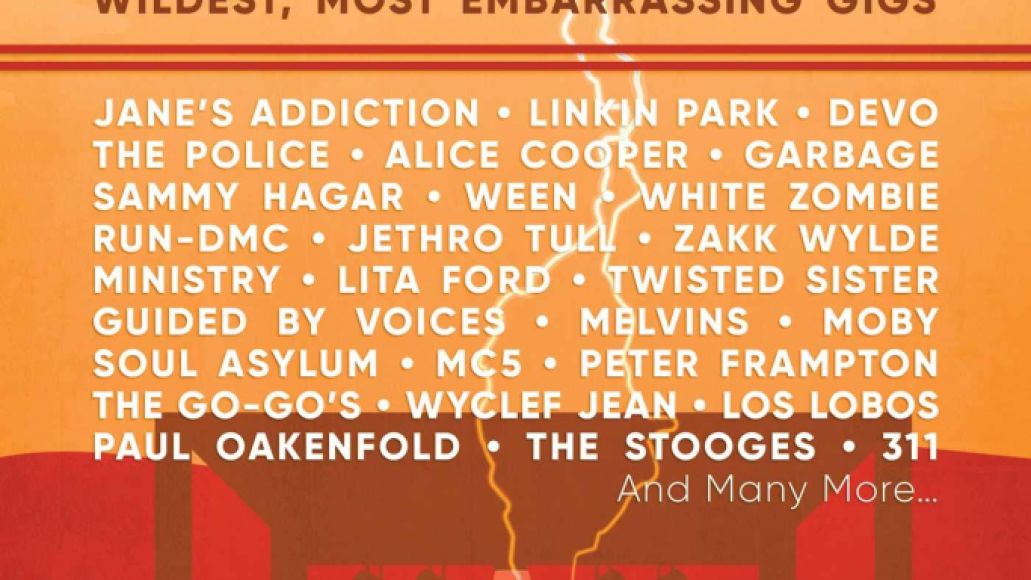 No Encore by Drew Fortune

The next thing I know, my manager comes into my dressing room, asking, “Did you go into Fiona Apple’s dressing room?” I said, “Yeah!” I was proud of it. I continued, “Of course I did! I left her a little message, wishing her luck on the gig.” I tried explaining that there was no better way to express my sincerity to her than with the blood that runs through my veins. About five minutes later I was in a meeting with staff and management. I’m not sure if her management was involved, or if she even saw the message, because an hour later, a team of crime scene cleanup people in hazmat suits began disinfecting her room. Instead of thinking that I was in some kind of trouble, or that I made a horrible mistake, I was gutted that my loving gesture had been evaporated from the planet. In my drugged-out state, I couldn’t comprehend that a message written in syringe blood, from someone she had never met, might have been frightening. Had someone come into my dressing room, and written a message in blood to me, I would have thought it was incredible. That’s how sick I was.

Around that same time, I was hanging out at Marilyn Manson’s house a lot. I would shoot up in his bathroom, and I would do the same thing. I would spray the bathroom mirror with blood. He was so freaked out by it that he called his housekeepers and assistants to clean it off. I remember thinking that this guy was the king of scary-rock-horror-goths. Why is he so freaked out by a little blood? His reaction was so funny that naturally, I did it again. [Laughs] This time around, I thought, “C’mon Mr. Scary! You can’t handle a little blood?” I really painted his mirror that time, and he did not appreciate it. My thinking was that if the first two times didn’t go over well, the third time would work. After the third time, I began to realize: People don’t dig this.

It wasn’t until years later, when I met my future wife Carmen Electra, that someone finally liked my syringe art. We were in a hotel room, and I sprayed a heart on the bathroom ceiling. She thought it was the most beautiful, touching gesture in the world. So, the whole thing ended up with a happy ending. The whole thing was just organic art to me. These stories weren’t embarrassing to me at the time, because of the state I was in. When I got clean and reflected, I couldn’t believe I had fucking done it. I got sober somewhere in the early 2000s, but it’s an ongoing process. I’ve definitely struggled with it, but for the most part, I’ve kept it together. I have a very happy and productive life, and feel blessed to have been forgiven for my behavior. It’s certainly not a version of myself that I ever want to revisit. The moral of the story is to make sure you only spray blood for the person you’re going to marry.