Spare Adam Lambert your self-important slander. The 37-year-old vocalist should be applauded, not lampooned, for his eight-year stint as Queen’s vocalist. It’s a courageous task, facing sharp criticism from doubting purists, who all want to argue the same thing: “There’s no replacing Freddie Mercury.” Here’s the thing, though, both Lambert and the surviving members of Queen would be the first to agree with them.

“I’m gonna say it! I’m going to address a … pink elephant in the room,” Lambert confessed three songs into their sold-out show at Houston’s Toyota Center on Wednesday night. “I’m not Freddie. I know. Because there’s no replacing the one and only rock god, Freddie Mercury! I look at this as the best opportunity in the world to carry the torch to one of my all-time heroes, and to sing these incredible songs, and to celebrate Freddie and Queen with you … I’m a fan, too, man!”

Fair enough. To his credit, Lambert’s range is impressively vast. He nailed the most challenging parts of “Somebody to Love” and “Under Pressure”, even adding his own flawless falsettos to each. And while his intonations rarely came close to the recorded renditions of Mercury’s arresting timbres, Lambert continually made good on his pre-“Killer Queen” promise to uphold the late singer’s spirit. 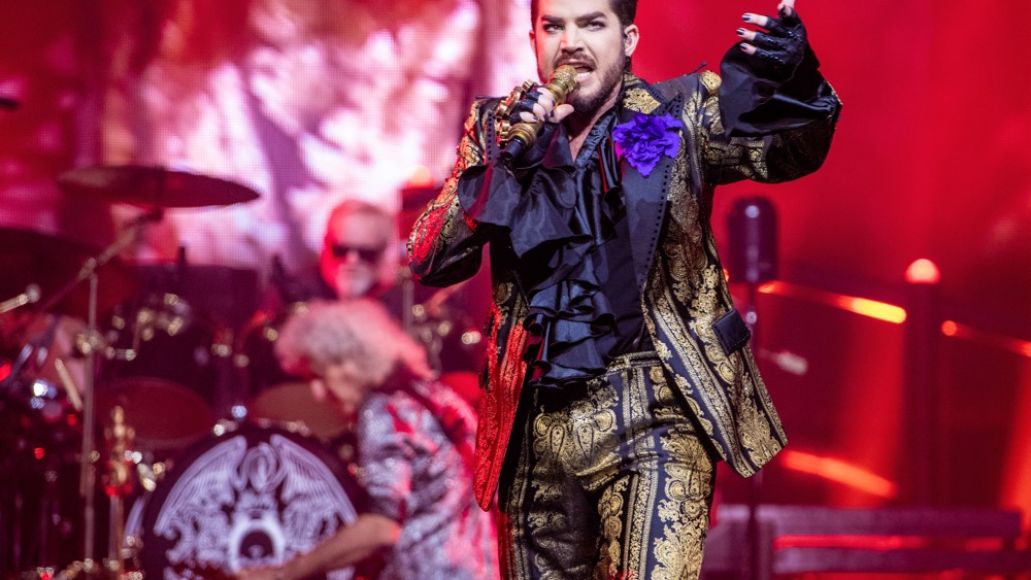 “I’m a queen,” Lambert reassured fans, proving as much by leaning on his flare for the fantastical: the haughtiest of dance moves and poses, the flashiest of outfits, and elements of pure theater. No kidding. Throughout the night, he accrued enough gilded tassels and rhinestones to fill a royal vault. On “Bicycle Race”, he emerged from the floor atop a rotating motorcycle, and even put on a monarch’s crown for the finale of “We Are the Champions”.

Oddly enough, the only times when Lambert’s performance felt forced were during the songs that Queen never played live until after Mercury’s death. “The Show Must Go On” came off as borderline-hair metal kitsch, and “I Want It All” would’ve flopped completely if not for guitarist Brian May’s resuscitation of his signature, adrenaline-inducing, screaming octave tone during the song-ending guitar solo.

Speaking of May, both he and fellow OG member Roger Taylor exuded nothing but authenticity. Every guitar riff resounded with the authority of god-gifted thunder, and most of their vocals evoked agelessness (no lie: Taylor’s leads on “I’m in Love With My Car” were indistinguishable from the original track). What’s more, it was clear they were intent on keeping certain aspects of Mercury’s legacy sacred to drive home their genuine intentions. 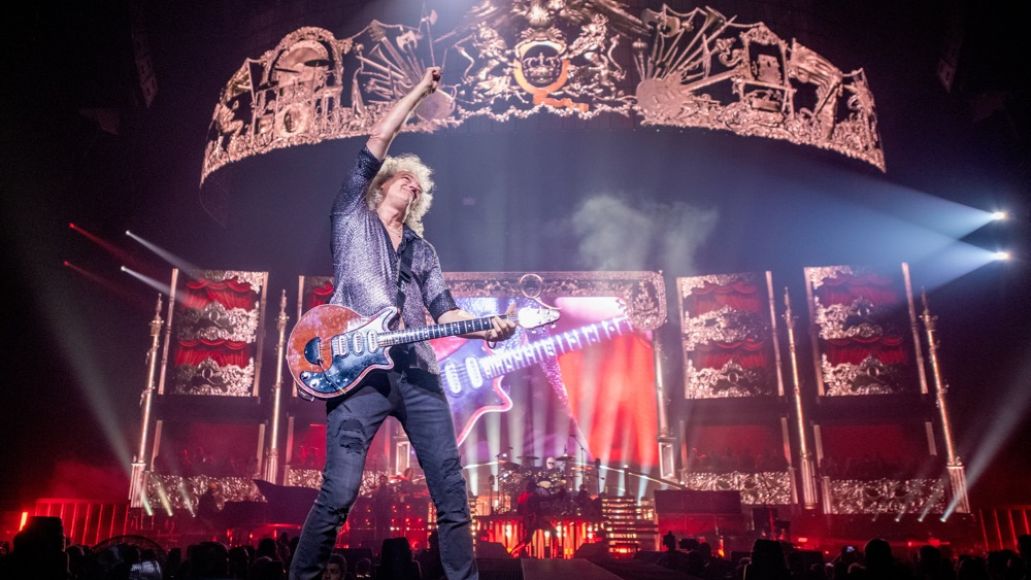 Prime examples: Lambert never appropriated use of the “mic stick”; the purity of the prime operatic part of “Bohemian Rhapsody” was preserved via playback paired with kaleidoscopic clips of the music video; rather than Lambert, a clip of Mercury from Live Aid at Wembley Stadium led the audience through the storied “ay-oh” shtick to intro “We Will Rock You”; and, most telling, May elected to perform “Love of My Life” solo. Granted, his pitch was less than perfect, but the clear choice to let no one other than Mercury sing it alongside him culminated into the evening’s most affecting moment.

For some, seeing that timeless ballad played sans the storied singer might’ve only reignited the diehards’ predicament: Queen can’t ever definitively be Queen without Freddie Mercury. But it also illuminated just what an incomparable talent he was, and how important it is for any self-respecting rock fan to honor his unending influence. Music owes so much to Freddie Mercury. May and Taylor know and revere that fact. So, maybe we shouldn’t label their show a glorified tribute, but instead call it what it is: the best damn rock and roll memorial around.

Queen + Adam Lambert Setlist:
Now I’m Here
Seven Seas of Rhye
Keep Yourself Alive
Hammer to Fall
Killer Queen
Don’t Stop Me Now
In the Lap of the Gods… Revisited
Somebody to Love
The Show Must Go On
I’m In Love With My Car
Bicycle Race
Another One Bites the Dust
Machines (Or ‘Back to Humans’)
I Want It All
Love of My Life
’39
Doing All Right
Crazy Little Thing Called Love
Under Pressure
I Want to Break Free
You Take My Breath Away
Who Wants to Live Forever
Last Horizon (Brian May cover)
Tie Your Mother Down
Fat Bottomed Girls
Radio Ga Ga
Bohemian Rhapsody

Encore:
Ay-Oh
We Will Rock You
We Are the Champions
God Save the Queen