If it’s summer in Chicago, it means two things: humidity and Riot Fest. This year, the former has been going pretty hard — and you can bet the latter will be doing the same this September 13th-15th for its 15th anniversary.

Returning to Douglas Park, the hardcore and punk festival is bringing a complete powerhouse of a bill for it’s big 1-5. Blink-182 are making up for having to cancel last year by performing Enema of the State in full, Slayer will be playing their final Chicago show ever, and reunited riot grrl pioneers Bikini Kill will be killing it on the stage. You’ve also got The Raconteurs, Rise Against, Patti Smith, Die Antwoord, Rancid, Violent Femmes, Descendents, The B-52s, Jawbreaker, Manchester Orchestra, Bob Mould, Guided By Voices, Ride, Pennywise, Hot Snakes, American Football, Hot Water Music, Cursive, Anthrax, and The Struts.

Of course, as per tradition, there will be a number of bands will be bringing full-album performances to Riot Fest. This year, that includes The Flaming Lips playing Yoshimi Battles the Pink Robot, Bloc Party celebrating Silent Alarm, Avail reuniting to play Over the James, Dashboard Confessional delivering The Places You Have Come to Fear the Most, and Taking Back Sunday treating fans to both Tell All Your Friends and Louder Now.

For a limited time, you can get single-day passes to the event for just $49.98 via the Riot Fest website. But tell ya what, we’re going to do you one better: we’re giving away one (1) pair of VIP passes to Riot Fest Chicago 2019. To enter, just fill out the widget below.

Note: If you are having trouble viewing the contest widget, click here. 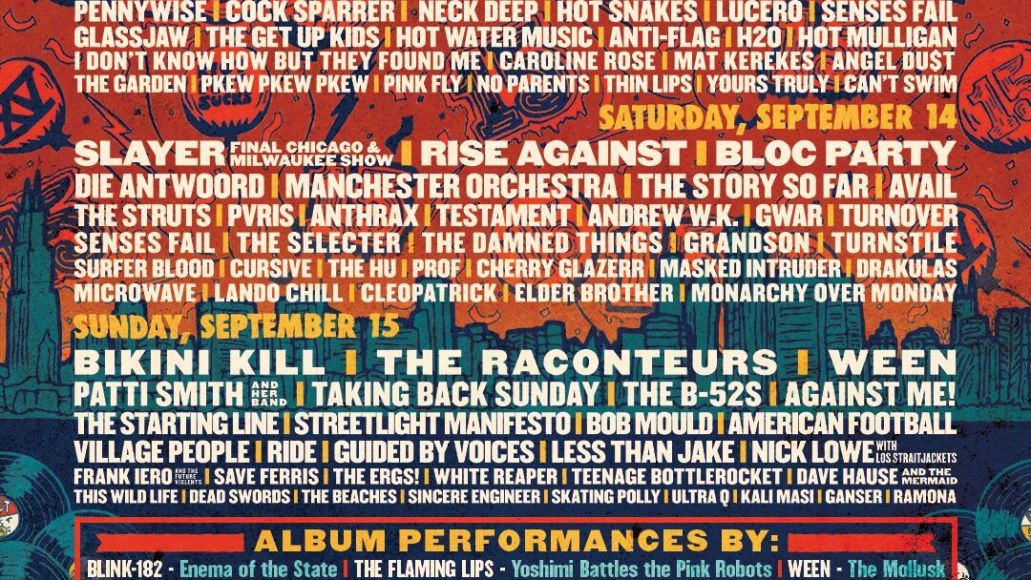