Director André Øvredal brings Stephen Gammell’s chilling illustrations to life in Scary Stories to Tell in the Dark, a feature length adaptation of Alvin Schwartz’s popular short story collections for children. Harold, the Pale Lady, the Big Toe, and even a gruesome horde of spiders all leap from the pages to take turns scaring the young protagonists.

But there’s one particularly terrifying foe that out terrifies them all: the Jangly Man. The climactic monster is played by actor Troy James, who captured hearts as Pretzel Jack in Channel Zero: The Dream Door and stole scenes as Baba Yaga in this year’s Hellboy.

James’ unique physicality and talent for contortion makes him the best suited for playing such a challenging creature. He breaks down the origins behind the monster, what it took to bring it to life, and unleashing its terror upon both the actors and audiences. 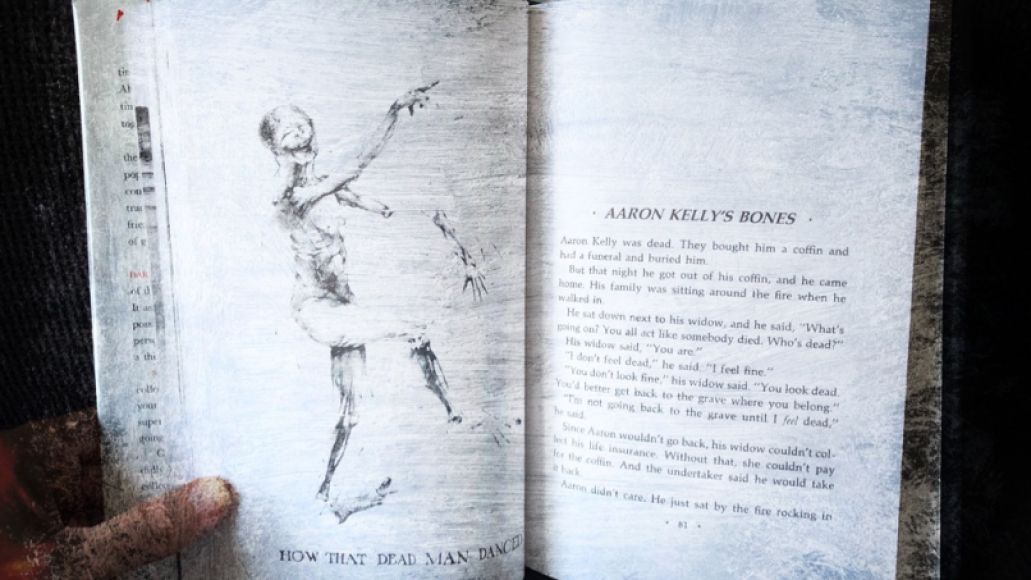 I believe [Jangly Man] is a compilation of multiple stories. One is “Aaron Kelly’s Bones”; another is “What Do You Come For?”, where the skeleton falls down the chimney and dances around the room; and of course, “Me Tie Doughty Walker”. I get to say it! I don’t know if they kept it, modified it, or found someone else who could say it better though.

I worked on a Guillermo [del Toro] project before, you might have heard of the TV show The Strain. I had a small appearance as a Mongrel vampire for the show. So, I think when they were making this monster they had me in mind. “How would you like to be our Jangly Man?” I adore Guillermo del Toro, so I said, “Of course!” 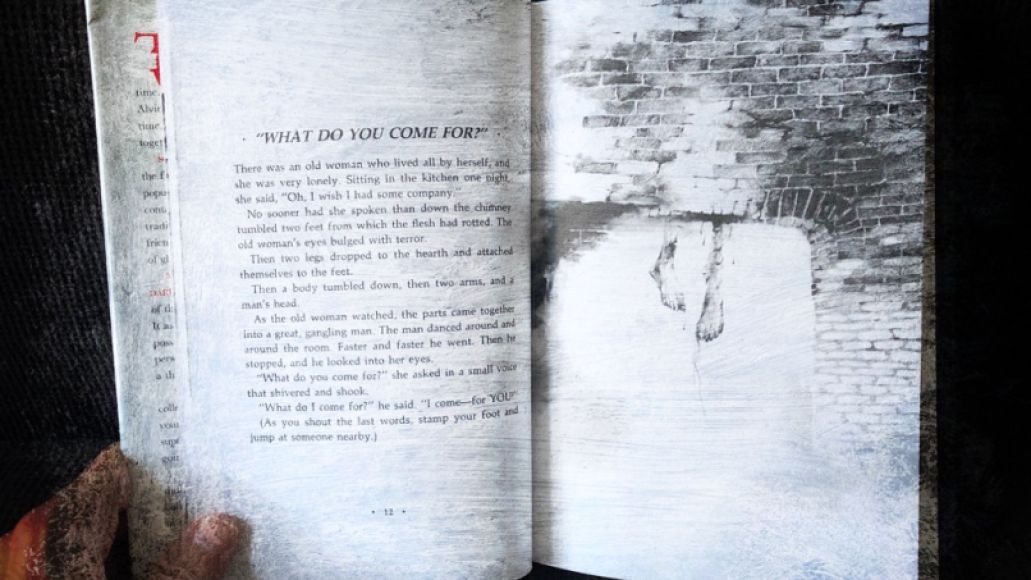 And I love the books so much. I think we all grew up with them; they were our childhood books. In my case, they were always checked out at the library; they were dog eared, the pages and spine were loose, because we loved these stories so much. The fact that they were making a movie about it, and that I was able to take a part in it, is just a dream come true.

They had to lifecast me — cast my entire body to sculpt the Jangly Man’s physique. Because the Jangly Man has such a unique method of locomotion, it’s not just, “Stand still and be covered in plaster.” It’s, “Raise your arms and hold them up,” because if we had sculpted it with my arms down, then when I lifted my arms up during shooting, the suit would rip. I had to be posed in a way that the Jangly Man would be walking. It’s really hard to cast someone upside-down, so that was a whole adventure on its own. 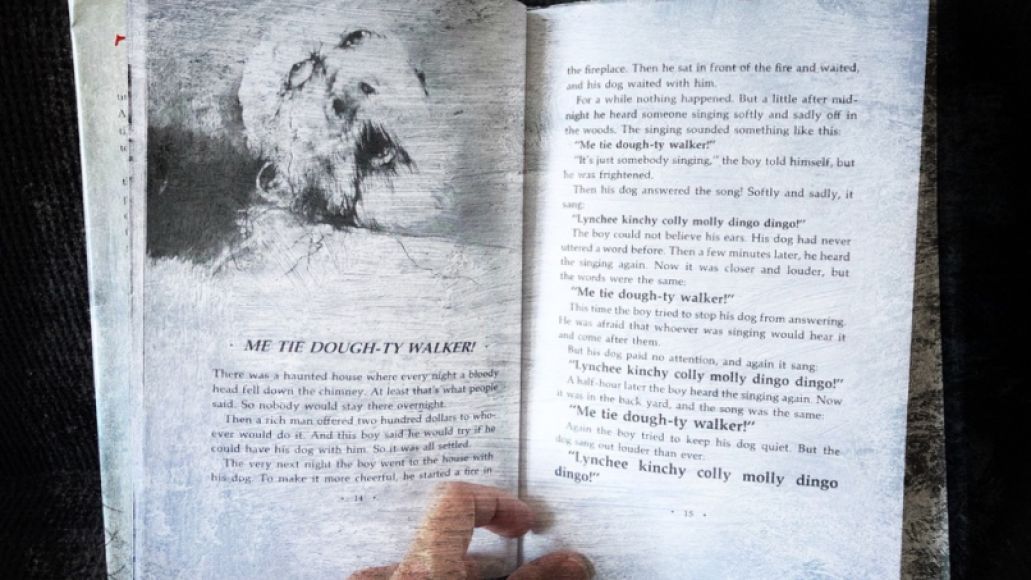 But yeah, they cast me, put me in plaster. It was a collaboration with [special makeup effects artist] Mike Hill to make me look absolutely terrifying. When I first saw what I would look like I thought, Holy crap. He’s got two eyes on different planes of his head, what looks like a smile cut in half. It’s not something you would want anywhere near you.

Because this creature is all body parts — arms, feet, torso — I’m not wearing any clothes, or any shoes, or gloves. It was quite a process to step in the body suit, but then they had to blend the hands in, put the hands on, paint my feet. It was a good five hours or so. 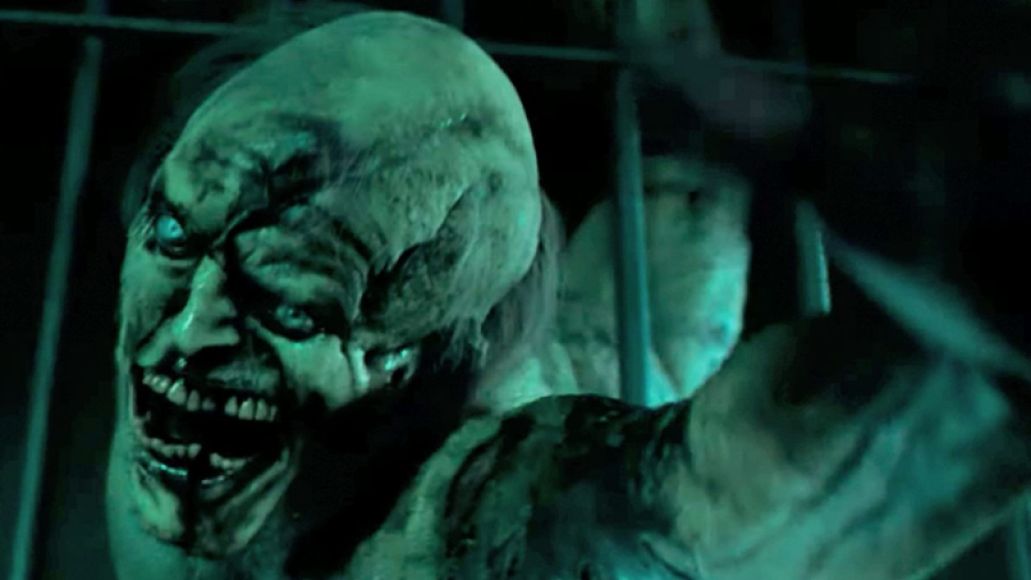 Jangly Man has two heads. He has one head when he’s standing up – you very rarely see him standing up — but then he has an upside-down head, so that when I’m crawling upside-down, his head is actually right-side up. He had different heads depending on the motion, and the upside-down head was more difficult to see out of because the mask’s eyes are not where my eyes are. I’d have to look up at the sky so that the mask’s face would be facing forward. The problem with that is you can’t actually see where you’re going. It was a lot of rehearsal. 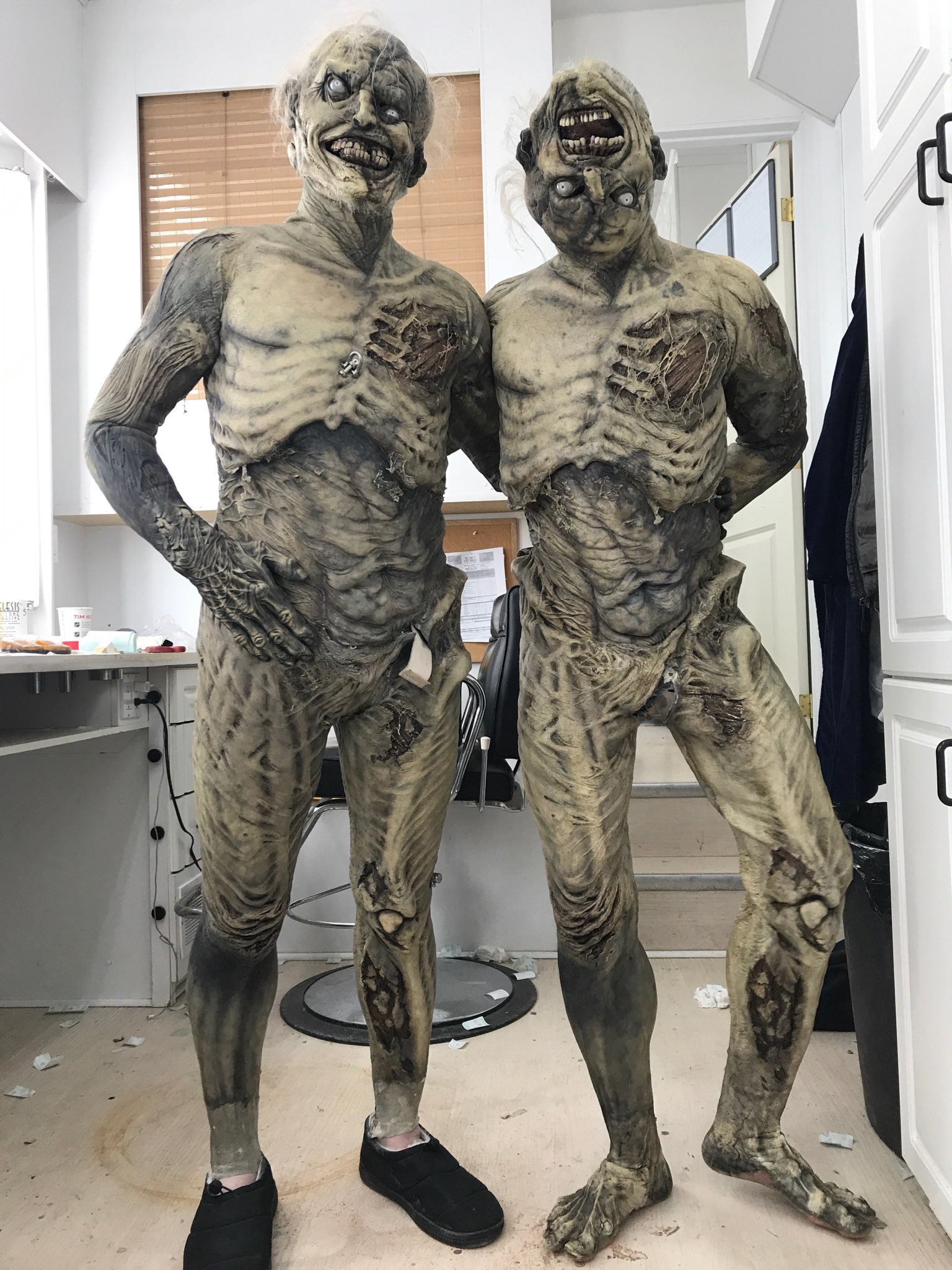 The Jangly Man Behind the Scenes, photo by Troy James 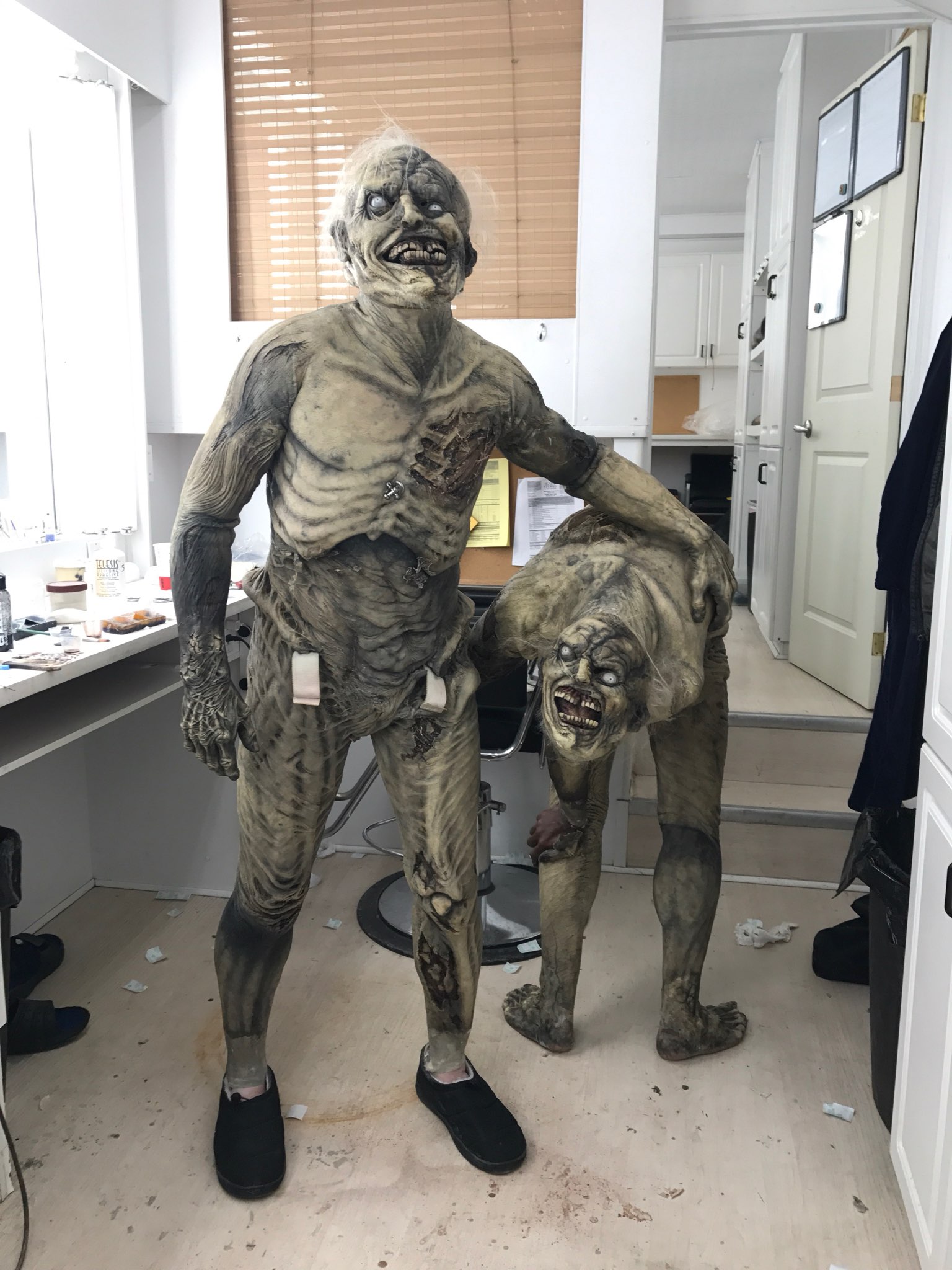 The Jangly Man Behind the Scenes, photo by Troy James

My favorite scene, I can’t wait to see it, was the police car scene. I wish I could see the rehearsal tapes, because it really was exactly how it looked. We were outside in the rain — the rain was really cold that day — so when I crawled up the car, everyone was worried I was going to fall. I had to knock out all of the car windows. I did have a stunt performer, Derek, and I have to give him a lot of credit. The part where the car is speeding and the Jangly Man is on the front bumper, that was him — and I don’t envy him. He came in with bruises the next day.

This was all shot on location. On the actual car, which did drive. That’s why they didn’t let me do it, because it went 80 kmh. I was on the staircase, and I actually climbed those bars, which is a lot harder than you think. All very practical. Guillermo del Toro was really adamant about practical effects.

[André Øvredal] has an aesthetic that I think came through similarly in The Autopsy of Jane Doe. He has a way of framing and lighting things that makes for creepy horror. That tension. Have you ever watched a movie where you see a lot of the monster and then it just sort of falls flat? Not so much here. I don’t know how he does it, but he has a way of constantly giving you tingles down your spine. I remember watching some of the playbacks thinking, This looks terrifying! And I just did it! When the trailer was released, I messaged Andre asking, “How did you manage to scare me, and I was in it?”

I have a really funny story about scaring one of the kids. Gabriel Rush, who plays Auggie, [dressed as Pierrot for Halloween]. We were doing a camera test where I was showing off the Jangly Man’s moves, and when I started there were four kids. But when I finished there were three kids. I asked, “Where’d the clown go?” And Stella [actress Zoe Colletti] said, “Oh, he doesn’t like you.” 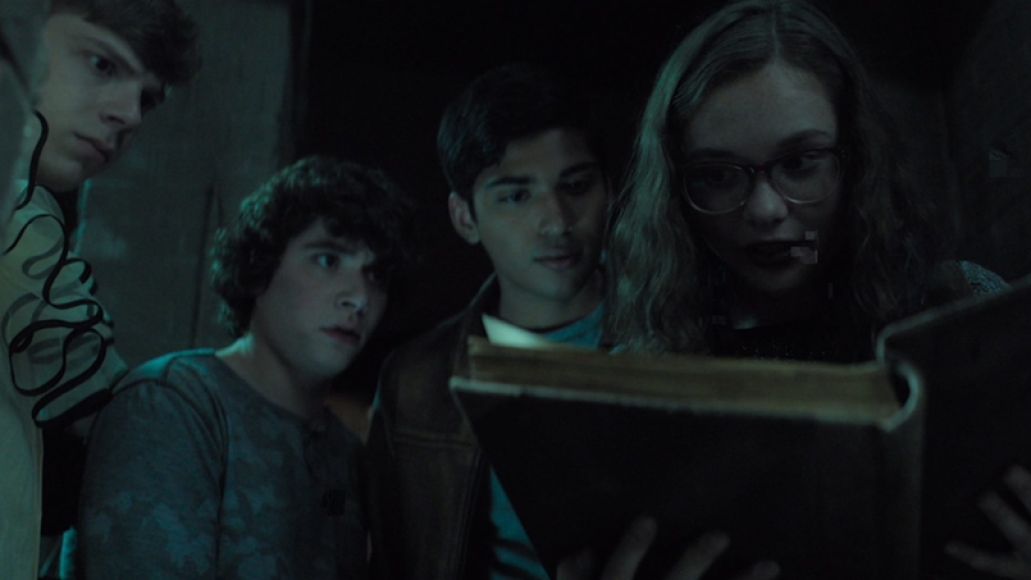 Later, the power went out on set. It’d gone out everywhere, including the trailers. Of course, this is my time. I have to take advantage of this. I had the trailer right beside Gabriel, and I decided to pull a Jangly Man. As he’s coming up between the trailers, I run at him upside-down, and I’d never seen anyone jump and run so fast.

I feel like I won the lottery. I still can’t believe I get to do this. That I get to be scary monsters. If I got to tell six-year-old me that, I don’t think he would’ve believed me.

Scary Stories to Tell in the Dark is now in theaters.

Anatomy of a Monster: How The Jangly Man Was Created for Scary Stories to Tell in the Dark