The Pitch: Grace (Samara Weaving) will do anything to appease her new blueblood in-laws. A former foster child who’s longed for family of her own, Grace felt she finally found one with the love of her life, Alex Le Domas (Mark O’Brien). Unfortunately for her, she has one hell of a rehearsal dinner to survive: You see, anyone marrying into the Le Domas family must survive a most dangerous game of hide and seek on their wedding night. To her credit, Grace is willing to play along with the eccentric request; that is, until she realizes what’s at stake.

Here Comes the Bride: The entire La Domas family presents an engaging ensemble that takes aim at the one-percent. Patriarch Tony Le Domas (Henry Czerny) is a caricature of greed and upper crust pretension, while his wife Becky (Andie MacDowell) is a more fair-minded portrait of who Grace could be if accepted into the family. Below them, Melanie Scrofano effortlessly handles the comedic relief as Le Domas screw-up and coke-head Emilie, while Adam Brody shines as Daniel, the aloof black sheep of the family with far more emotional complexity than his alcohol infused apathy lets on.

This film belongs to Weaving, though, whose star-making turn as Grace is by far the most difficult of the bunch. Directors Matt Bettinelli-Olpin and Tyler Gillett waste no time getting straight to the thrills, giving Weaving the Herculean task of running through an exhausting gauntlet of physical horror. The sheer level of athleticism required to play Grace merits praise, but Weaving makes it seem all too easy. What’s more, she seamlessly blends into the film’s tautly paced comedy, prompting both screams and laughs in a dizzying pace that’s hardly a short ask. 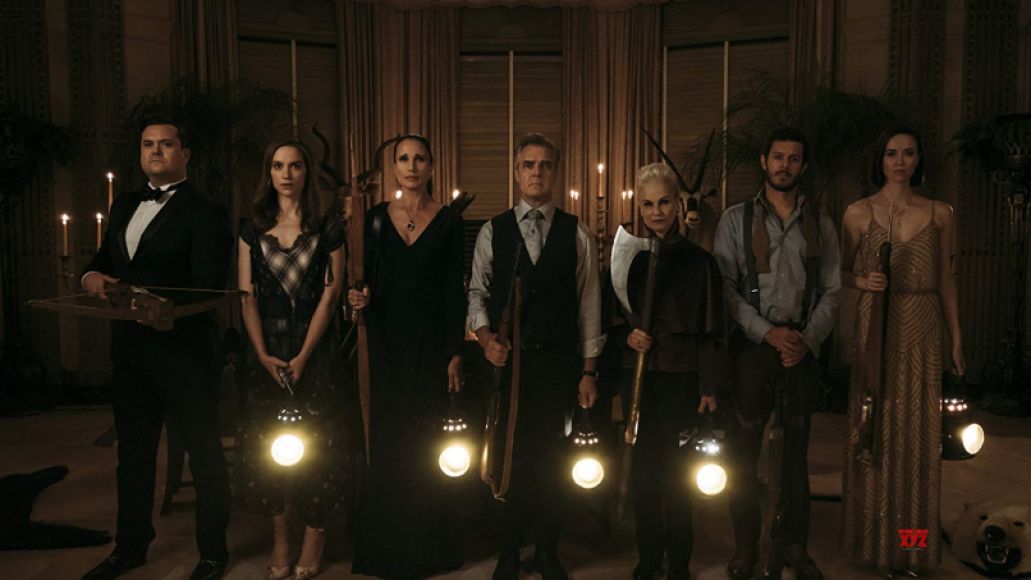 The Venue: The set pieces add to the fun in this hyper-violent horror comedy. The Le Domas mansion and its surrounding property feels every bit apropos of its blueblood owners, but with sly details that wink to the game playing aesthetic. Look no further than the Le Domas game room, where the festivities began, that’s lush with various taxidermy trophies and weaponry. It’s an overt warning that also doubles as world building.

From the expansive servants’ corridors behind the wood-paneled, antique-laden floors of the mansion to the massive goat-filled stables at the edge of the property, Bettinelli-Olpin and Gillett keep things exciting with one set piece after another, all of which offer keen insight into this twisted world. Altogether, it creates a dark palette that adds to the suspense, suggesting that danger can be lurking anywhere for poor Grace.

Till Death Do They Part: With a game of life or death on the line, viewers should expect things to get violent. Extremely violent. As the narrative barrels toward the finale, the family grows more and more desperate with all bets off in their hunt. When it comes to its lead protagonist, however, that violence is read as unnerving tension; after all, we care about what happens to Grace. When it comes to the Le Domases, however, the blood and gore is dialed up to almost slapstick levels of humor. This is satire at its least subtle and it’s addicting to consume.

The Verdict: Ready or Not skewers classism and the one-percent with deranged humor and a contagious concept. Clever mythos and well-crafted chills with an expertly-paced narrative makes for a deliciously entertaining, late summer crowd-pleaser. Make no mistake, there’s zero subtlety with its class commentary and how unabashedly over the top it’s willing to go. Because of this, the sheer volume of blood and violence alone might be off-putting to some, no matter how intentionally campy it appears to be. However, for those who relish their horror comedies — especially those unchecked and with an anything-goes-attitude –they’ll fall head over heels for this stuff.

Film Review: Ready or Not Is the Horror Comedy of 2019