Update: Slayer’s sponsorship of the car has been pulled due to “reactionary concerns.”

Slayer will set out on the last leg of their final tour this fall, and to commemorate the occasion, the band has teamed up with Rick Ware Racing to be the primary sponsor for the No. 54 car at this upcoming weekend’s NASCAR race.

The “Slayer” car will be speeding around the track at the Bass Pro Shops NRA Night Race as part of the Monster Energy NASCAR Cup Series on Saturday, August 17th, in Tennessee. Check out a mock up of the car below, complete with the band’s logo on both sides and the hood of the car.

“NASCAR racing and Slayer have a lot in common”, guitarist Kerry King remarked in a press release. “Both are extremely fast, intense, and aggressive. I can think of nothing more rad than seeing the Slayer logo on Rick’s car with JJ [Yeley] behind the wheel. I’m sure disciples of everyone involved will be completely stoked on the bond between these two fierce entities!”

NASCAR Cup Series veteran JJ Yeley will drive the “Slayer” Chevrolet during the race at Bristol Motor Speedway, one of NASCAR’s most notable tracks. “Being able to showcase the legacy that Slayer has created over the past 40 years is a true honor,” said Yeley.

Slayer themselves will wrap up their final tour with an appearance at Riot Fest in Chicago on September 13th, followed by a string of dates across Latin America before a monthlong trek through the United States in November. See the band’s full list of remaining shows. 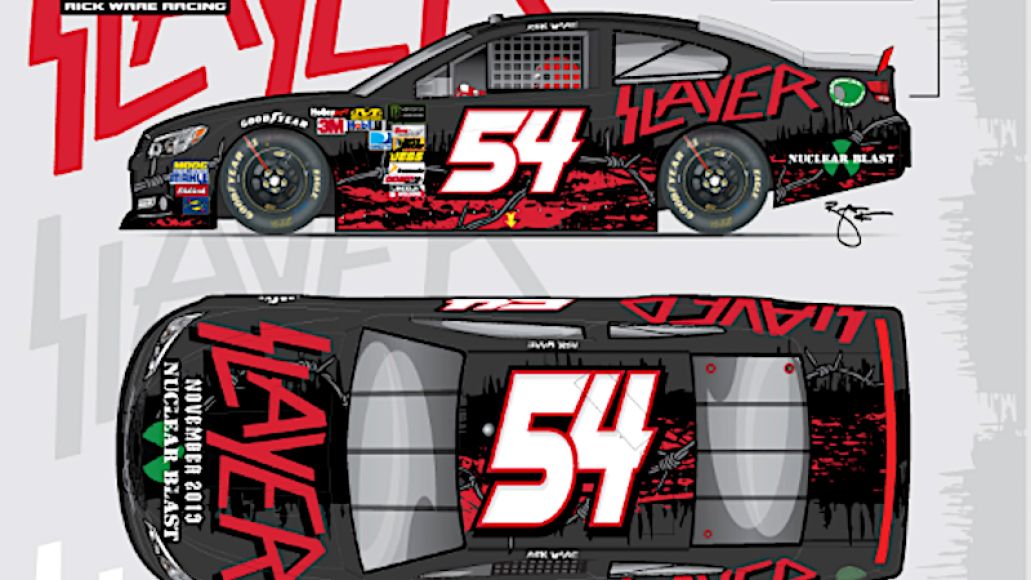 Slayer's iconic logo will cover No. 54 car at NASCAR race ahead of final tour leg