“You’re traveling through another history, a history not only of sight and sound but of mind; a journey into a wondrous land whose boundaries are that of imagination. That’s the signpost up ahead — your next stop, Alternate History X.”

This week marks the 20th anniversary of the premiere of Freaks and Geeks, the ultimate short-lived cult TV show. As a chronicle of teenage suburban misery in the early 1980s, Paul Feig’s program only lasted 18 episodes, but it still casts a tremendously long shadow. Not only did its intelligent, adept mixture of comedy and drama presage the kinds of prestigious, high-toned shows that would come to dominate the next two decades — but the show’s cast was absolutely stacked.

Between Feig and cast members like Seth Rogen, James Franco, Linda Cardellini, and Busy Phillips, Freaks and Geeks has had an undeniable impact on pop culture in the 19 years since it went off the air. Measuring that impact can be a little bit tricky, so instead, I decided to measure its hypothetical absence: How would pop culture be different if Freaks and Geeks had never existed?

For the purposes of a clean experiment, I’m imagining a kind of localized Y2K rapture that snaps creator Paul Feig and the show’s primary teenage cast members out of existence starting in 1999. With that in mind, let’s start at the least impactful cast member and work our way up to the top. And If you disagree with anything contained in this article, I’m sorry, but I don’t make the rules. This is science. 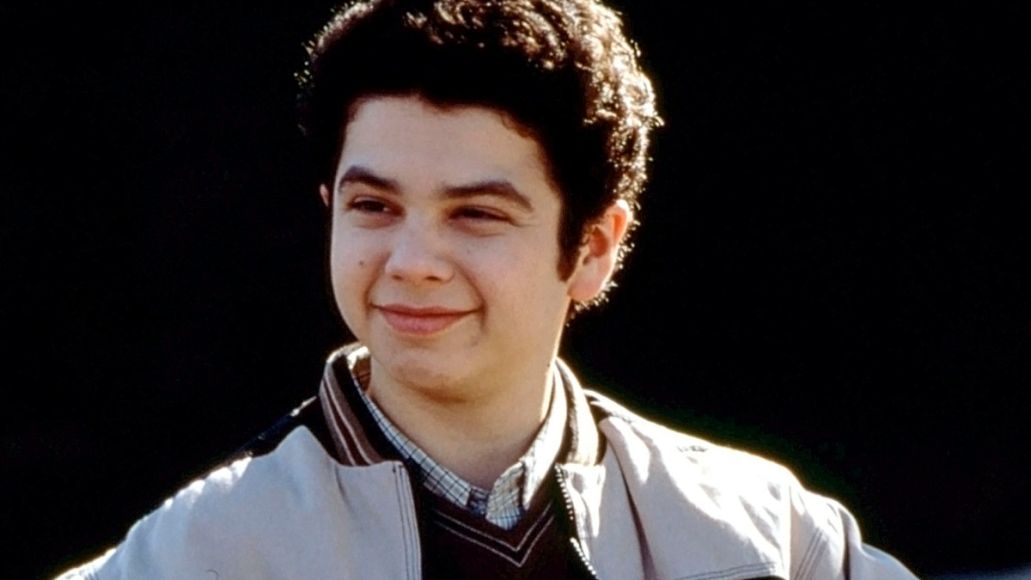 Of all the Freaks and Geeks cast members, Sam Levine has had the least impactful post-show career. Don’t get me wrong, he has become a grade-A “that guy” actor, popping up steadily in shows and movies to the tune of 120 total IMDB credits, but it might be most accurate to describe Levine’s low-grade level of fame “the Drunk History zone” — a show that he has appeared on three times.

The problem for Levine is that he’s totally replaceable, so his disappearance from the pop-cultural landscape wouldn’t actually alter the trajectory of any films or TV shows. Still, I posit that it would have a slightly positive effect for one other actor in particular: David Krumholtz aka Charlie from Numb3s aka Joseph Gordon Levitt’s friend/co-conspirator in 10 Things I Hate About You aka Mr Universe from Serenity. As another Jewish, wise-cracking “that guy,” Krumholtz would be in a perfect position to fill in many of Levine’s roles were he off the map.

What We Lose: Nothing, but David Krumholtz makes out like a bandit. 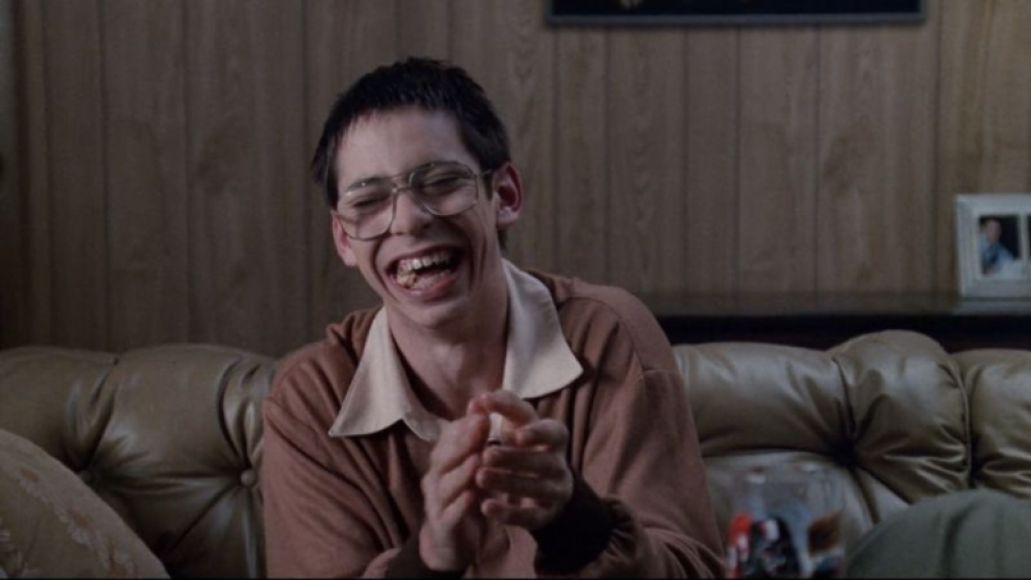 Sadly, like Levine, wiping Starr off the face of the earth (via some sort of … “Starr-Wipe”) wouldn’t cause too many ripples … unless you truly believe in the delicate power of ensembles. Silicon Valley and Party Down are both shows with absolutely loaded casts and their charms often lie in the intricate, back-and-forth interplay between co-stars.

Would ripping Starr out from either show mean that the show would no longer exist? Probably not … but it could also subtly alter cast chemistry so that neither show ascended to their current heights — or in Party Down’s case, its ironclad cult status. Without Starr, maybe Silicon Valley has a solid run but calls it quits after five seasons, or even four.

What We Lose: 2-3 seasons of Silicon Valley, assorted cherished memories of Party Down. 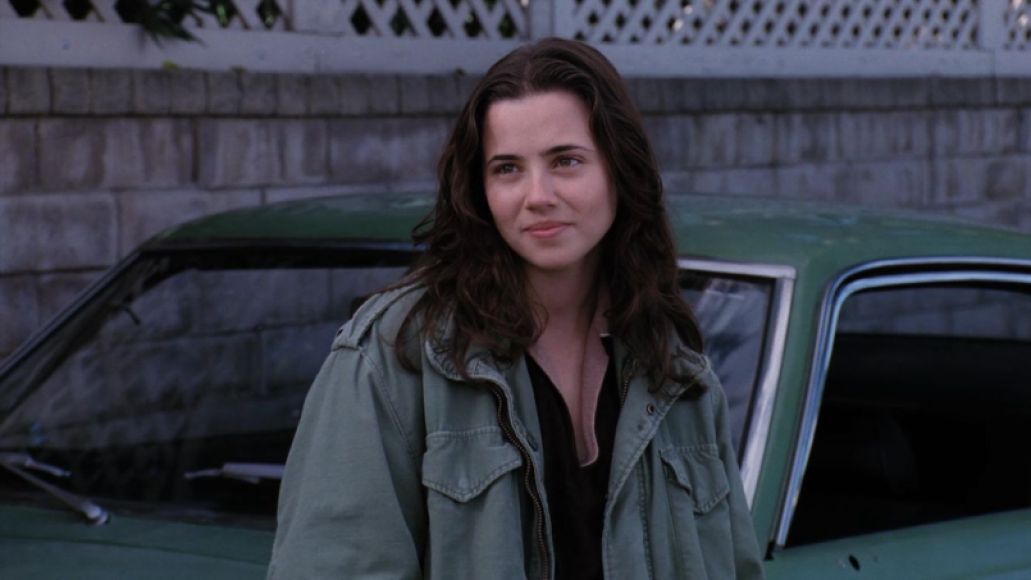 Following her performance as one of TV’s greatest surly teens, Linda Cardellini has embarked on the classic TV actor career: She can score headlining roles on the small screen, but is mostly reduced to smaller roles in the multiplex. Cardellini’s biggest film roles came as Velma in 2002’s Scooby Doo and 2004’s Scooby-Doo: Monsters Unleashed (neither of which features the Harlem Globetrotters, making them decidedly not canon). If you remember that she also played Hawkeye’s wife in the Avengers films, please seek help. You’re in too deep.

On TV, however, Cardellini co-starred in Bloodline as Meg Rayburn and, most recently, as Jude Hale in the delightful, black-hearted Netflix show Dead to Me. So if she had vanished in 1999, it’s safe to say that Dead to Me is off the table. And you know what? Let’s kill off Bloodline too — and then spend a long time freaking out about it on or near a boat, as the show would have wanted. But here’s the sticky bit … ER.

From 2003 to 2009, Cardellini co-starred on the long-running medical drama as nurse Sam Taggart. If there was ever a show that functioned as remorseless, actor-proof machine it was … well, okay, it was Law & Order … followed by literally every successful daytime soap opera, but ER is totally in the mix! The show had George Clooney and then lost George Clooney and then ran for another 10 damn seasons! It would be kind of absurd to say that without Linda freaking Cardellini you wouldn’t get the final 10 seasons ER… 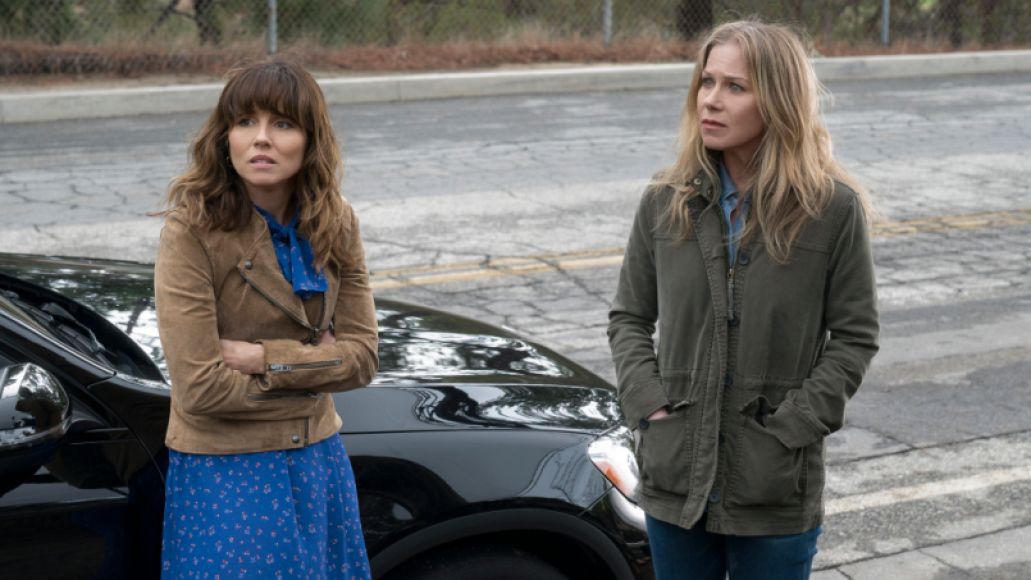 Linda Cardellini in Dead to Me, Netflix

…but then again, the butterfly effect is a helluva thing. Who am I to say that Cardellini wasn’t actually the secret linchpin that held the entire thing together. Let’s split the difference: Without Cardellini, the show stays on the air but things get … desperate … and then they get weird. Now, things on ER did, in real life, get a little weird towards the end. Let us not forget the ballad of Dr. Robert Romano, crushed to death by a falling helicopter.

But without Cardellini, what if they show took an even crazier turn into the supernatural? Psychic nurses wrenching spirits from the astral plane and jamming them back into flat-lining bodies, thirsty vampires stalking the blood storage units (aka that one episode of Are You Afraid of the Dark?), Lovecraftian death-cult members coming in because their skin got turned inside out during a ritual, the whole nine yards.

It’s a hypothetical fact that Linda Cardellini’s down-to-earth, no-nonsense aura was the only thing standing between ER and a much higher budget version of Garth Merenghi’s Dark Place. Remember, that show was created was by Michael Crichtion, who once wrote a novel about super-smart murder gorillas. Prove me wrong.

What We Lose: Dead to Me, Bloodline, ER-with-vampires 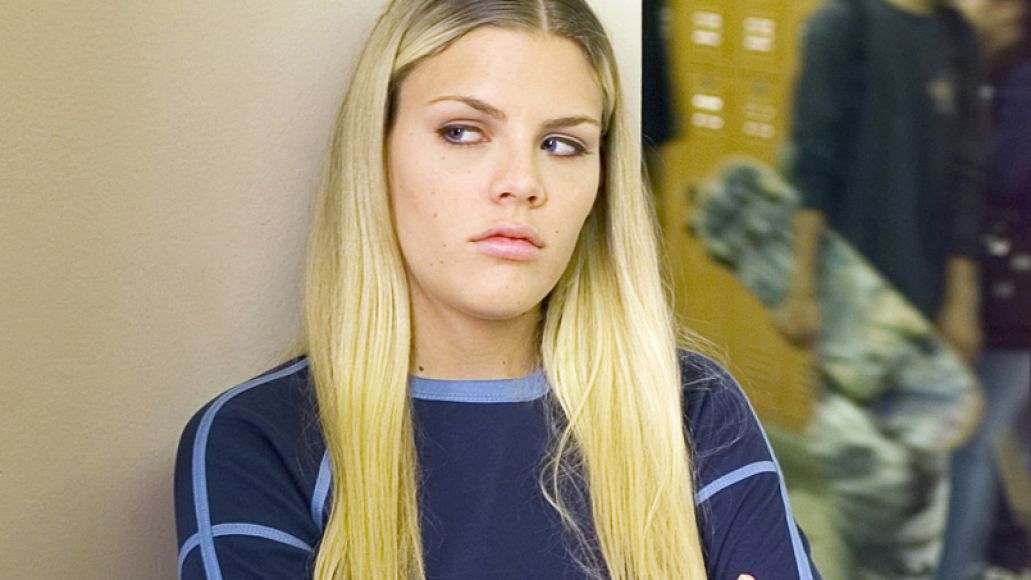 You could argue that Busy Philipps should be higher on this list, and I wouldn’t blame you. She ended up ranking in the bottom half because what we would lose without her is a bit more ephemeral. While Philipps has had a more than respectable career in television, often in supporting parts, she has been an absolutely A+ celebrity. She’s funny, witty, outspoken — and also deeply affecting in her advocacy for equality and women’s rights. Losing her as a celebrity would hurt far more than losing her 2005 show, Love, Inc.

But then there’s Cougar Town. I’m not going to argue that Cougar Town wouldn’t have happened without Philipps. For that, we’d have to be dusting Courtney Cox along with the entire cast of Friends. (Side note: This would have a much smaller effect on the pop-cultural landscape than dusting the cast of Freaks and Geeks. Think about it.) Similar to Martin Starr and Silicon Valley, though, I think not having Philipps in the cast would have dramatically affected that show’s boozy chemistry for the worse — like a glass of red wine getting watered down by ice cubes.

I’m calling it: Without Philipps, the show doesn’t last beyond two seasons. And for good measure, we’ll also say that it doesn’t develop that weird sister-show relationship with Community, losing us both Abed’s delightful cameo and the god-level Community episode “Critical Film Studies”.

What We Lose: Busy Phillips the celebrity, her short-lived talk show Busy Tonight, four seasons of Cougar Town, one episode of Community. 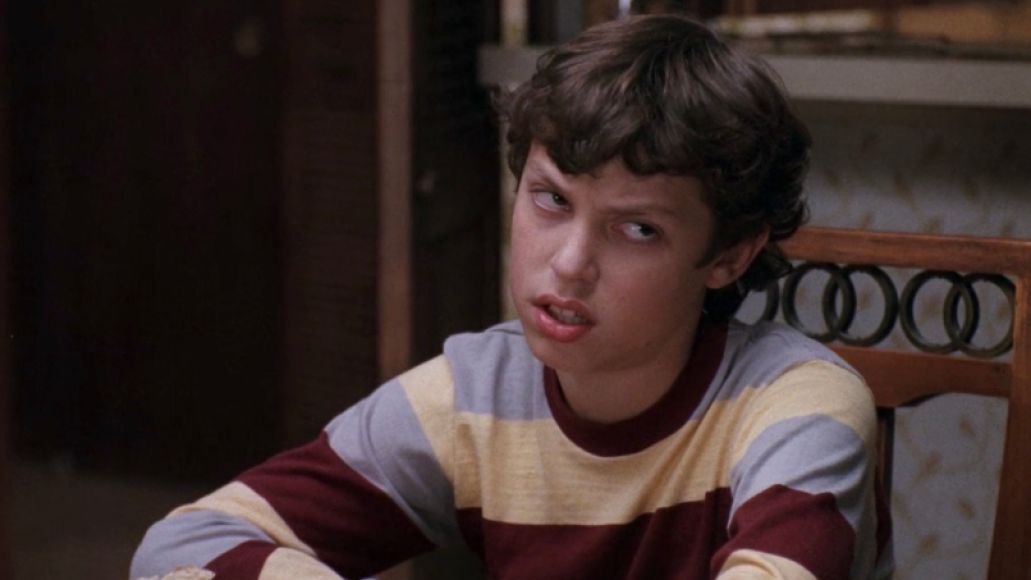 “Really?!” you’re saying to yourself, “Freaking Sweets is ranking higher than Linda Cardellini and Busy Phillips?!” Calm down, straw person, and let me explain. Yes, it’s true that John Francis Daley is best known post-Freaks and Geeks for the many years he spent glued to David Boreanaz’s side as the quirky FBI Agent Lance Sweets on Bones. (I apologize for referring to him as “quirky” — literally everyone on that show is “quirky.”) But here’s the thing you might not know about Daley: The biggest impact he’s made in the two decades since moving on from Sam Weir hasn’t been as an actor; it’s been as a writer and director.

Without Daley, the following films do not exist: Horrible Bosses, Horrible Bosses 2, The Incredible Burt Wonderstone, and the Ed Helms-starring reboot of Vacation. These are all films that Daley wrote or, in the case of Vacation, wrote and directed. (He also wrote Cloudy with a Chance of Meatballs 2, but I’m willing to concede that a sequel to the first film would have happened with or without him.) (He also didn’t actually write Horrible Bosses 2, but he gets a story credit, and, obviously, that sequel wouldn’t exist without the original.)

Now, with the possible exception of the first Horrible Bosses, I think it’s safe to say that few people would be broken up about none of these films existing. However, Daley also directed last year’s surprise sleeper hit Game Night. You remember that flick, right? It came out of nowhere and was surprisingly good! It was a solid, non-franchise-adjacent, adult-oriented comedy! While its reputation is slightly inflated due to the sheer novelty of this film a) existing, and b) being pretty dang good, Game Night would undoubtedly be missed.

And then there’s Spider-Man. You see, Daley co-wrote Spider-Man: Homecoming, but trying to figure out his level of responsibility for the finished product is pretty near impossible because Marvel is truly an entertainment-industrial complex unto itself. So long as Kevin Feige and Robert Downey Jr. are still there, these movies are pretty much turning out the same. And with Spider-Man: Homecoming, the same goes for Tom Holland.

And yet … that film managed to improve upon the basic Marvel formula in so many ways: Its neighborhood-level stakes, its complex and enjoyable villain, even its banter was at least a good 25% better than normal. Frankly speaking, the Peter-Vulture car scene is one of the best written MCU scenes, period. Given how the Hulk-like strength of Spider-Man: Homecoming’s script contributed to the finished product — underscored by the comparatively weaker, non-Daley credited script to Spider-Man: Far from Home — I’m willing to give Daley at least partial credit.

Let’s go with 20%. Without Freaks and Geeks’ John Francis Daley, Spider-Man: Homecoming would be 20% worse. If you walked out of that film with a bounce in your step, that bounce now has only 4/5ths of its previous elasticity. You feel like you’ve been deprived of … something. You just can’t tell what.

What We Lose: Game Night, Horrible Bosses 1 and 2, The Incredible Burt Wonderstone, Vacation, 20% of Spider-Man: Homecoming.

Where Would Pop Culture Be Without Freaks and Geeks?