Eddie Vedder covered the Daniel Johnston song “Walking the Cow” during his solo headlining performance at Ohana Music Festival on Saturday night. The three-day music festival is co-organized by Vedder, and routinely features a special set from the Pearl Jam frontman.

“Walking the Cow”, off the 1983 album Hi, How Are You, is one of Johnston’s most popular songs. It also happens to be a favorite of Vedder’s, as he frequently plays it at solo shows. In fact, his love for the track goes back several decades; Pearl Jam first covered the song in 1994 at a benefit show. Last night’s cover felt different, though, as it was the first time Vedder played it since Johnston’s passing earlier this month.

(Read: For Daniel Johnston, Art and Therapy Were One and the Same)

During his set, Vedder played numerous stripped-down Pearl Jam songs and covered tracks by The Beatles, Tom Petty, Neil Young, George Harrison, and Glen Hansard, but his Johnston cover stole the spotlight. Armed with an electric guitar, he played “Walking the Cow” solemnly, at one point getting audibly emotional. Before launching into it, Vedder gave some context about why he loves the song so much, including a vivid memory with Chris Cornell.

“There was a guy, a great, great songwriter, who we lost less than a month ago,” he said. “I know Glen Hansard and everyone from Kurt Cobain to Lana Del Rey, an endless list of musicians, who were inspired by this man. He lived in Austin, Texas as a kid and started making tapes. Then he put them in a store and made copies of the tapes and the tapes got around to musicians. Before you knew it, everybody was talking and sharing the genius of this young man. That was quite a while ago, I think in the mid- to late-80s. He made music until he recently passed. He had a tricky time, but out of that tricky time came some of the most poignant songs and vulnerable heart that I’ve ever heard.”

“I remember Chris Cornell and I listening to him,” he continued. “We were sitting in this little room in my house where there’s a fireplace and a small couch — it’s not even a couch, it’s like half a couch. I didn’t want to say love seat because it might sound a little weird. But we listened for two hours straight and that turned into four hours and that turned into six hours. We were laughing and crying and then smiling so hard that tears were squeezed out of our eyes. We looked at one another, and I’ll never forget, we said, ‘He is better than both of us.’ His name was Daniel Johnston.” Watch the whole thing go down below. 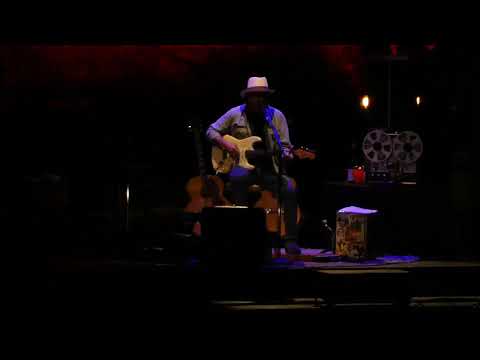 This year’s Ohana has been eventful so far. Vedder joined The Strokes onstage during their set to cover Pearl Jam’s “Hard to Imagine” as well as The Strokes’ original “Juicebox”. Between that surprise appearance and his tender Johnston cover last night, it’s a good time to be a Pearl Jam fan at the music festival.