The New Classic Rock: Heading into Pasadena Daydream, most wouldn’t expect to be bombarded with parallels to the Rolling Stones’ show that hit the Rose Bowl Stadium just over a week prior. But they were everywhere. The generational shift was impossible to miss in the crowd. While parents brought children of all ages — a girl around the age of 12 wearing a custom “Little Miss Post Punk” tee was a standout — it was the ocean of tour shirts that spoke to the history on display. Threadbare tees from the Head on the Door tour jostled for space fight alongside faded tops from the Bloodflowers run.

Akin to the feverish atmosphere around Stones shows, Cure concerts in America have taken on a reverent air, becoming fewer and further between. The last time they were in Los Angeles, they rolled out three-hour shows packed with obscurities and deep album tracks over four sold-out nights. The nostalgia factor is just as high, spanning a similar length of time. That was clearly evident in the age range of the crowd, where the number of kids was matched by those well into their golden years, adding a very Stones-like air to the proceedings. Even the eclectic lineup carried echoes of the many years the Stones have brought a diverse A-list of opening acts, ranging from Stevie Wonder to Prince to Guns ‘N Roses.

Even more to the point, The Stones’ first album arrived in 1964, while The Cure’s debut, Three Imaginary Boys, came along just 15 years later in 1979. So, upon closer inspection, a Cure show in 2019 essentially lines up with a Stones show circa 2004, which was when they were commanding stadiums amidst their greatest hits/40 Licks tour. Now, the Cure are following in the Stones footsteps by settling into their own legend and mythology, resulting in epic events like Pasadena Daydream, where they brought their fans and friends out for a last-summer-gasp in the park.

Pasadena, We Have Some Problems: Booking a late August outdoor festival in Southern California can be a particular form of cruelty. For Pasadena Daydream, the wide open expanse of land next to the Rose Bowl Stadium is not known for shade, With temperatures hovering precariously close to the century mark, the early arrivers were in for a long, hot day. Compounding the matter was overwhelmed entry point, causing fans to wait in that uncomfortable heat far too long just to get inside. It was not a pretty sight as fans lamented online about being stuck in line while the bands they came to see were already playing inside.

On the Bright Side: Those who endured the heat and made it inside early were rewarded with stellar opening sets from Emma Ruth Rundle and Kaelan Mikla. Both benefited by playing on the secondary “Willow” stage, a freestanding tent structure providing precious shade in the all-too-oppressive heat. Elsewhere, The Twilight Sad and Mogwai brought big sounds to the main stage, aka The Oaks, with Mogwai’s moody atmospherics particularly surreal under the relentless sun. A little later in the tent, Chelsea Wolfe and The Joy Formidable kept the energy high by commanding crowds that spilled well beyond the confines. A stroll through VIP turned up the likes of Green Day’s Mike Dimt, actress Christina Hendricks, and the Coachella impresario himself, Paul Tollett, surveying the scene down front.

Sacramento Represent: If the Deftones are on a bill in Southern California, the band’s faithful will show up. Such was the case at Pasadena Daydream, where Sacramento’s finest took on the sweltering mid-afternoon temperatures to charge through a set of fan favorites and deep cuts. Opening with two tracks from 1997’s Around the Fur, Chino Moreno and the gang made the most of their time onstage. Moreno, in particular, made it clear the honor that came with being asked to play the Cure’s curated festival: “I’m way happier to be here than you are.”

Where is My Time? Pixies are still making records. In fact, they’ve got one coming out in a couple of weeks called Beneath the Eyrie. That didn’t matter much to a large cross-section of the Pasadena Daydream crowd. For them, the Pixies stopped making music sometime in the early ’90s, back when the outfit initially called it quits. Given their catalogue of songs — from undeniable classics such as “Wave of Mutilation” and “Where is My Mind” to the frantic, whiz-bang energy of “Planet of Sound” — it’s understandable. Even so, the goodwill of their hits earned them plenty of space for new songs before closing with the one-two punch of “Debaser” and “Gigantic”, which bassist Paz Lenchantin handled admirably.

Kristen Hersh is Underrated: Anyone who went to Pasadena Daydream to see Throwing Muses were given a real treat. For starters, the band’s set time was more than ideal: the sun had already gone down and it was situated between the Pixies and the Cure, meaning there was more than enough space in the Willow area. By the time Kristen Hersh, David Narcizo and Bernard Georges took the stage, however, the space was packed with diehard fans hungry to see the groundbreaking outfit up close and personal. Hersh seemed flattered by the scene and, at times, even overwhelmed at the outpouring of love and affection. Although they leaned heavily on 1995’s University and dipped into 1989’s HunkPapa, it was 1991’s “Counting Backwards” that really charged up the Alternative Nation generation, who sang along to every single word. 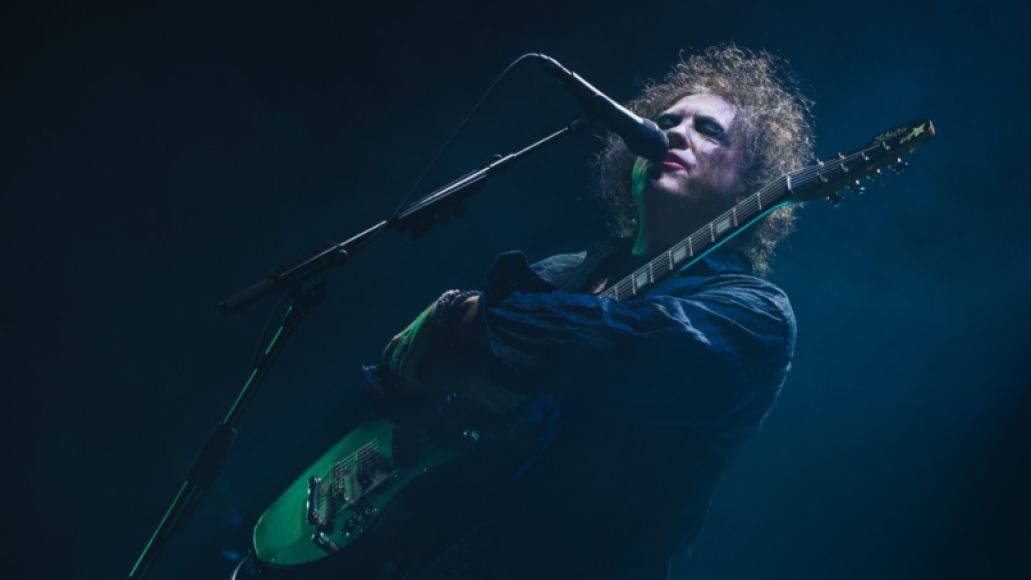 The Cure at Pasadena Daydream, photo by Debi Del Grande

In the Beginning, There was the Cure: At Pasadena Daydream, Robert Smith and company showed why they’re among the greatest rock bands of all-time. Emerging onto a smokey stage with Disintegration opener “Plainsong” and closing with their 1979 single “Boys Don’t Cry”, the English legends touched on all aspects of their vast discography through an epic 27-song set.

From “Shake Dog Shake” to “The Walk” to “The Caterpillar” to “Burn”, Smith revisited their post-punk building blocks as much as he indulged in their psychedelic pop. Just looking at the setlist is like gazing over a greatest hits box set, and it certainly felt like that, only Smith was wise enough to toss out surprise trinkets, such as the first-ever US performance of the song “Just One Kiss”.

Never one to display much emotion onstage, Smith did allow himself some smiles and even offered up some banter towards the end of the long day, telling the crowd, “It’s the best day of the summer.” It was also the giddiest, particularly during the encore, when Smith triumphantly turned the sweltering festival into a dance party with “Friday, I’m in Love”, “Close to Me”, “Why Can’t I Be You?”, and “Boys Don’t Cry”.

It was a performance both sublime and intense, with the tight cadre of ace players delving into the intricacies of the music with the dexterity of a jam band. With Simon Gallup storming the edge of the stage, band legend Roger O’Donnell on keyboards, drummer Jason Cooper pounding his kit, and guitar icon Reeves Gabrels dreaming up more atmosphere, the connections to the past were readily apparent. 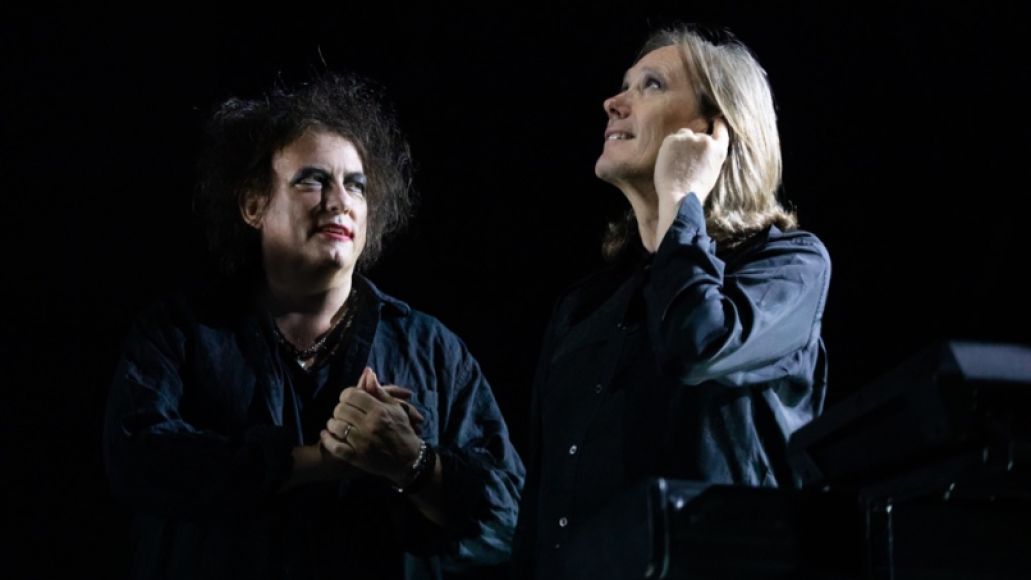 The Cure at Pasadena Daydream, photo by Debi Del Grande

Yet, like the Stones, there’s no reason the Cure can’t keep adding to those connections for another 15 years and beyond.