The Pitch: Set in 1927, the eponymous film adaption of the beloved six-season series, Downton Abbey, opens by tracing the path of a piece of Royal Mail, from (one assumes) some sort of mailroom at Buckingham Palace to the servant’s entrance at Downton Abbey. It bears the news that King George V and Queen Mary will arrive for a one-night stay in short order, and the residents of Downton—the Crawley family, their staff, and the village folk—are all of a dither. For Lady Mary (Michelle Dockery), the arrival means her estate-management duties grow even more strenuous, up to and including setting up folding chairs in the rain and casting a lot of side-eye at head butler Thomas (the invaluable Robert James-Collier)—even going so far as to call Mr. Carson (Jim Carter) out of retirement.

For Lady Edith (Laura Carmichael), it’s a royal wrench thrown into the middle of her hard-fought domestic bliss with Bertie Hexham (Harry Hadden-Paton). For Lady Violet (Maggie Smith, global treasure), it’s a chance to strong-arm cousin Maud Bagshaw (Imelda Staunton) into explaining precisely why she’s so wishy-washy on naming her heir, who should, in theory, be Lord Grantham (Hugh Bonneville). And for charming widower Tom Branson (Allen Leech), it’s a chance to meet—and make eyes at—Maud’s lady’s maid Lucy (Tuppence Middleton), who has a curiously close relationship with her mistress. They’re all pretty keyed up, as is Princess Mary (Kate Phillips)—but they’ve got nothing on Mr. Molesley (the wonderful Kevin Doyle), who knows in his heart that this chance to serve the royal family is the pinnacle of his life and career. So yes, chaos ensues. 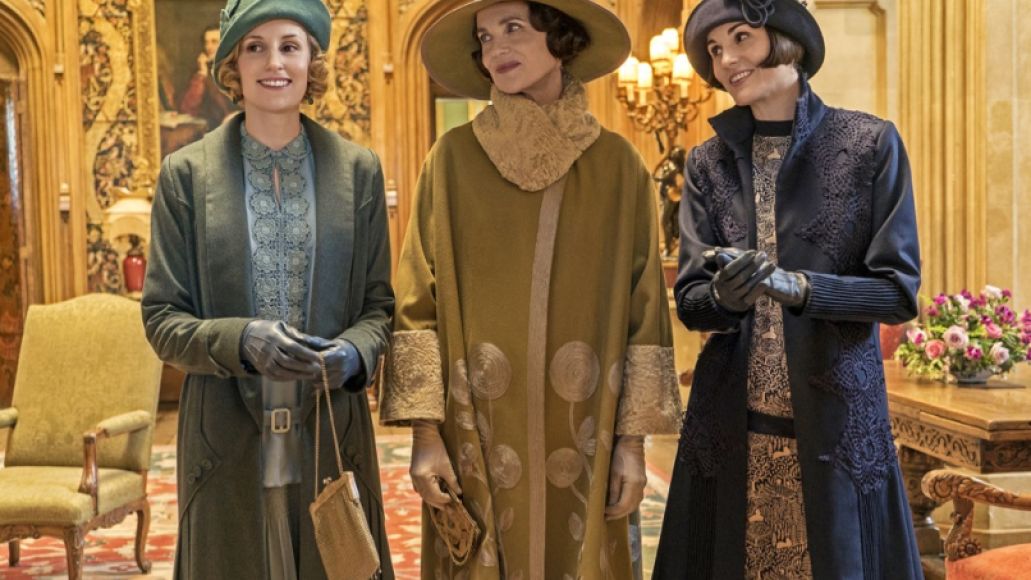 Quite A Bit of Plot, Innit? It is. Downton Abbey plays as though creator (and screenwriter) Julian Fellowes had a great season of television planned, one chock full of melodrama, romance, and a fair amount of silliness, and then took it all and crammed it into two hours. The result is a story that’s somehow simultaneously overstuffed but slight. Enjoyable, all the way through, and occasionally moving (if, and perhaps only, you’ve seen the series, but more on that later), but almost comically rushed.

Here is but one example: A dastardly, potentially world-shaking crime is foiled by a longtime, beloved resident of Downton, and it’s a subplot at best. There’s no time for anything more. Irishman and onetime rabble-rouser Tom Branson finds himself the subject of increased scrutiny, perhaps even suspicion, before the royal visit, but there’s no room for his emotional response to that. Life-changing revelations are simply announced, with little build-up or fanfare. Then, they all move along.

On the other hand, plenty of time is devoted to the machinations of visiting servants, silly schemes cooked up by the staff, a dramatic food-ordering mishap, a hot plumber, and (thank heavens) loads of one-liners for Maggie Smith. It’s a curious balance. Imagine a two-hour “previously on” sequence, only instead of reminding you of what happened before, it’s telling you what’s happening at the moment. Throw in some jokes and swooning camerawork, and you’ve got this movie. 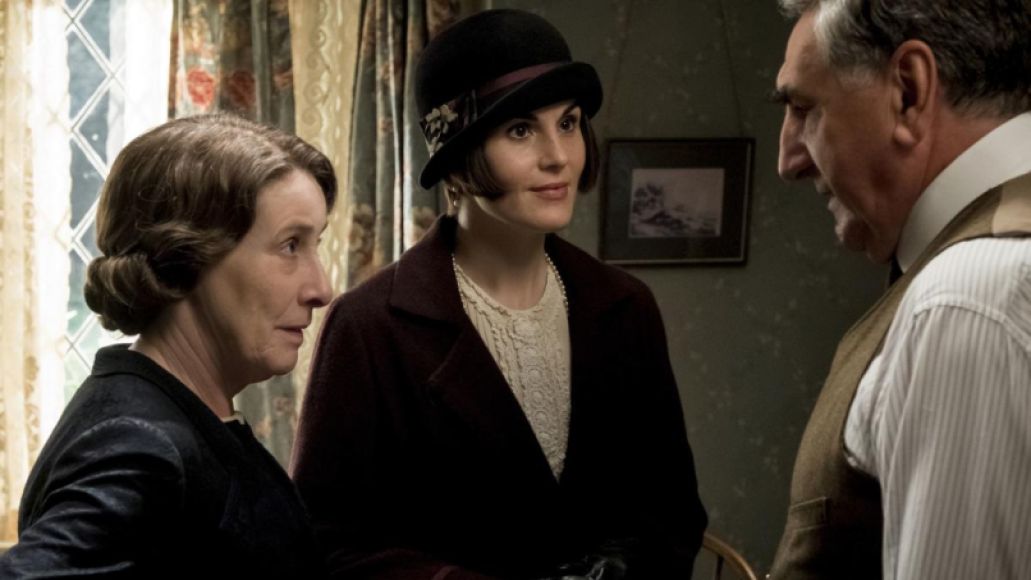 History, Darling: All that said, despite the rushed, sometimes underdeveloped nature of the storytelling, Downton Abbey doesn’t lack depth or subtlety. Such is the benefit of centering a film on characters with a shared history that goes back decades, captured in more than 50 hours of television, brought to life by great actors. When Edith and Mary greet each other, there’s no need to spell out the years of hurt and anger, the wounds they still have, and how hard-fought their current understanding must be. They simply greet each other, and Dockery and Carmichael do the work, silently—a tightening of the lips, eye contact perhaps a touch too fleeting. We see Thomas actually enjoying himself, and it’s all the sweeter because we know such joy comes after years and rage, isolation, and despair. When Staunton’s character confides in Isobel (Penelope Wilton) but declines to tell Violet the truth, assuming she won’t understand, Isobel’s sad smile alone reminds us that we’ve got proof to the contrary. The film is loaded with history, but it’s not fan service. (Well, mostly.) It’s something far richer: subtext, coupled with faith that the audience won’t have forgotten the Crawleys and company too quickly. As gambles go, that was a good one to make, and it greatly benefits the film. 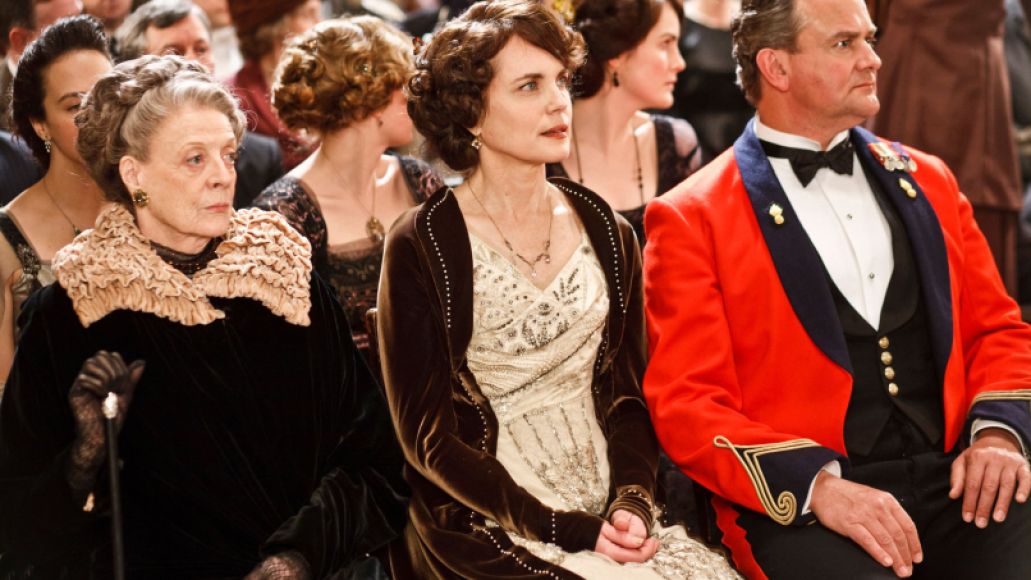 One Must Put on One’s Finery: As a television series, Downton Abbey had its ups and downs, but it always—always—looked like a million bucks. That, unsurprisingly, hasn’t changed. Director Michael Engler and cinematographer Ben Smithard capture everything—the impossibly green lawns, picturesque cottages, costume designer Anna Robbins’ elegant gowns, and the house, the house, my god, the house—with a gaze that’s reverent, even rapturous. At the end of that opening, mail-chasing sequence, the camera swoops up from the train wending through the countryside in a great hurry, as if it can’t wait for the view; once up in the air, it lingers, floating, as if the mere sight of the majestic Jacobethan house (the real-life Highclere Castle) keeps it suspended. It follows the staff from room to glorious room, twirling dizzily as if it wants to see how it feels to wear one of those long silk skirts. It’s the kind of affair seemingly destined for production and costume design awards, a wonderland of hand-painted wallpaper and unnecessary tiaras. It’s gorgeous. (It may also make you want to eat the rich, but your mileage may vary—and Downton the film, like Downton the series, draws a direct line from the house to the community.

Can You Watch This Thing Without Having Watched the Series?: Sure, especially if you like pretty dresses. But read a couple of summaries, and make sure to look at pictures of the characters, or you’ll be totally lost.

The Verdict: The strengths of the series are the strengths of the film. It looks great. It sounds great. If it could, it certainly would smell great (like rain, Earl Grey, green grass, and freshly baked bread.) And above all, it’s beautifully acted by a cast able to land both the punchlines and the punches. That it’s somehow less substantial than almost any single episode of the series boggles the mind, but it doesn’t much matter. Odds are, if you’re seeing this film, it’s because you want to go back to Downton Abbey, and if that’s what you want, then you’re in for a treat.

Where’s it Playing? The Abbey is open now.

Film Review: Downton Abbey Looks, Sounds, and Feels as Great as the Series