The Pitch: In 2013, a group of down-on-their-luck strippers and exotic dancers working out of New York’s hottest nightclub find an ingenious way to recover from the indignities of the Great Recession of 2008: butter up the unsuspecting Wall Street guys who frequent the club, spike their cocktail with a mix of ketamine and MDMA, and max out their credit cards before chucking them in a taxi.

For young single mother Dorothy/Destiny (Constance Wu), it’s a means to an end, a way to care for her family and recover from her economic uncertainty. For her charismatic best friend and ringleader Ramona (Jennifer Lopez), there’s more than a hint of Robin Hood retribution behind it all: “The world is a strip club. Some people fling the money, and everyone else is doing the dance.”

Together, the two turn their ‘fishing’ expeditions into a full-fledged business, outsourcing work to other girls and building a fortune off the backs of bilked hedge fund dopes. But like any risky endeavor, what comes up must come crashing down. 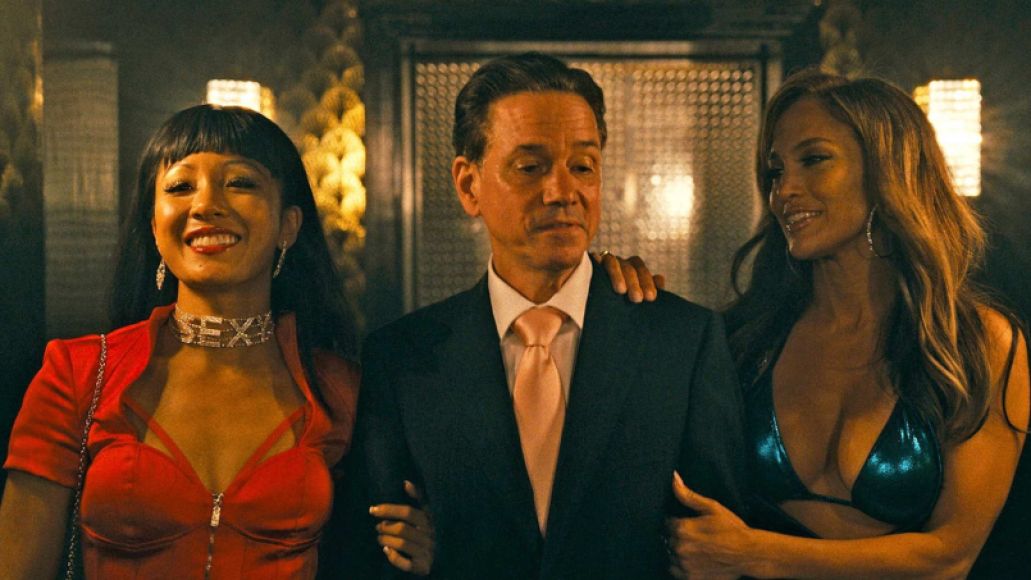 This Is a Story About Control: Lorene Scafaria’s film, adapted from the New York Magazine article “The Hustlers at Scores”, fits comfortably into a recent subgenre of stories I’ve come to call ‘recession cinema.’ Consider the likes of 99 Homes, The Wolf of Wall Street, Hell or High Water, et al. — films either directly or indirectly exploring the way the 2008 financial crash devastated working-class people, and the frustrating untouchability of the rich assholes who caused it. It’s in this spirit that Romana and Destiny’s scheme strikes a particularly addictive chord: Who doesn’t love the idea of seeing Wall Street douchebags get their just desserts, especially at the hands of the people who are most often affected by economic uncertainty (sex workers, especially women of color)?

Scafaria’s devil-may-care approach is a perverse delight to watch, swimming in the same lurid waters as Scorsese’s tales of unchecked greed and ambition. DP Todd Banhazl glides effortlessly between the neon-soaked bacchanal of the club to the pristine, white living room of an older Destiny as she recounts the story to a journalist (Julia Stiles) who yearns to dig to the core of Destiny’s mindset. Moment by moment, Hustlers is loads of fun, with long streaks of dark comedy ribboned throughout its tale of women playing a man’s game and finding success. 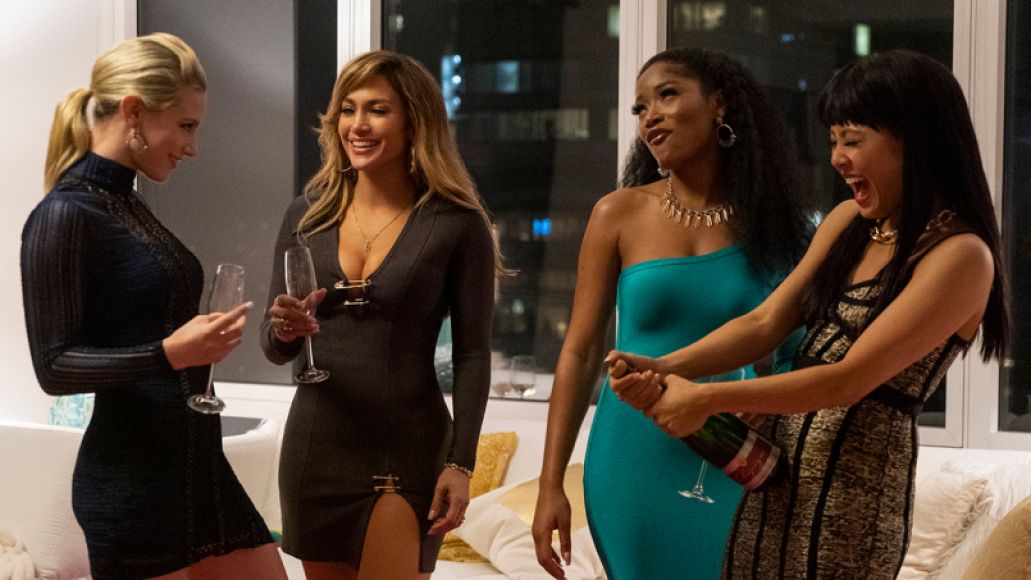 Hurt People Hurt People: Smartly, Scafaria’s script takes time to squeeze in some of the ethical complications of the girls’ plot, in classic Scorsesian fashion. While most of the ‘clients’ we see are smirking, gum-smacking finance bros who get off on degrading the dancers (“did your daddy abuse you?”), a lot of Ramona and Destiny’s marks end up being gormless, sad guys who just want a little attention. One mark, Doug (Steven Boyer) gets reeled in at the lowest possible moment in his life, and their grift takes an especially sad toll on him. What’s more, the constant dismissals from bystanders about their victims’ plight (“He went back three more times? Guess he musta liked it!”) puts a bittersweet stain on their steal-from-the-rich shenanigans. Yeah, these guys are douchebags; no, that doesn’t make the girls’ scheme any more ethical.

“Doesn’t Money Make You Horny?” But Hustlers is only intermittently interested in that angle, though it gives it a fair bit of real estate in the film’s more sober final act. Until then, though, it’s designed to be a vicariously thrilling good time, and it’s got the performances to match. As the lead, Wu gets the thankless task of acting as audience surrogate and morally compromised main character, but she modulates between those modes with aplomb. Most ‘telling the film to a third party’ framing devices fall flat, but Wu manages to liven up these exchanges with a careful hesitation, an unwillingness to do anything but sell her version of the story to the world. She’s sympathetic, to be sure — her scenes with her grandmother (Wai Ching Ho) are lovely, and she plays electrically off Lopez. But she’s also a pragmatist at heart, which leads her to take some ruthless steps to succeed. 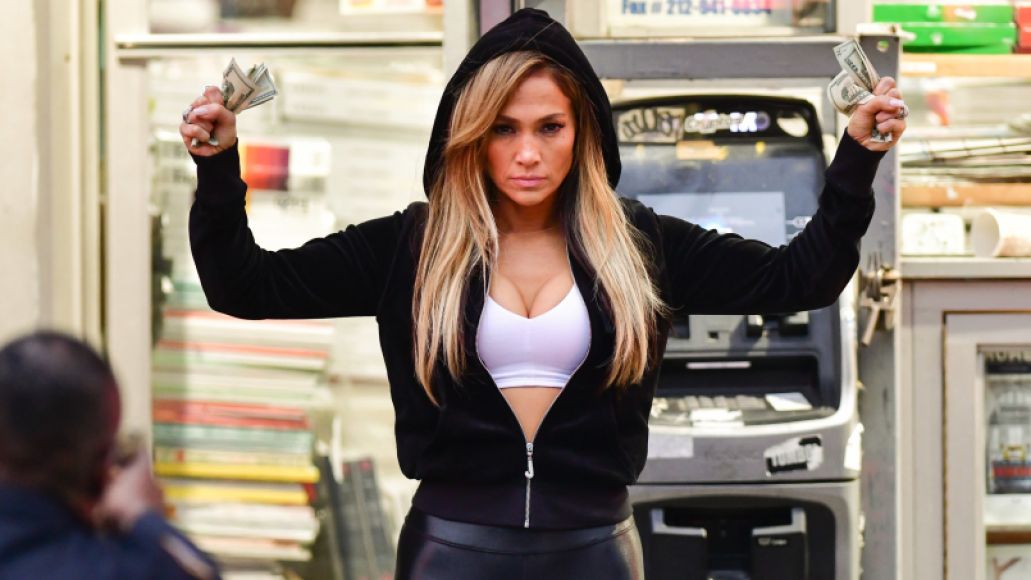 But we have to talk about Jennifer Lopez, making a full-fledged comeback to the big screen (after re-focusing on her music career and languishing in schlock like The Boy Next Door and the short-lived cop drama Shades of Blue) with her meatiest role since Out of Sight. From her first frame, she struts into the film like a hurricane in pumps, commanding every room she’s in whether filled with rubber-jawed men or awe-struck women. Perpetually decked in a blindingly extravagant fur coat or an array of dazzling dresses and accessories, Lopez’s costume game alone is worthy of mention. But as a performer, Lopez infuses Ramona with the kind of on-stage confidence that made her a pop star, and leverages it into a hauntingly complicated turn as a woman who refuses to let the sexist demands of the world define her destiny. She and Wu are most vivid and interesting when the film turns its eye to their complicated, toxic female friendship, even when that component of the story doesn’t get the focus it may deserve.

The Verdict: Not all of Hustlers works — many of its supporting players, especially Keke Palmer and Lili Reinhart respectively as Destiny and Ramona’s chief accomplices, get short shrift, and the reveal of Lizzo, Trace Lysette, and Cardi B’s roles as nothing more than spirited cameos feels like its own kind of con. But there’s something to be said for the exuberant glee of strong, confident women not just owning men’s spaces, but putting forth a distinctly female gaze on the kind of erotic thriller that all too often titillates men in the name of feminine power. Plus, if nothing else, we get to see Lopez command the screen as easily as Ramona does the stage, offering up a seductive awards-worthy performance that makes us remember why she became a movie star in the first place. If you’re gonna fight Wall Street, you might as well do it in the sexiest heels you can find.

Where’s It Playing? Hustlers slides down the pole and into theaters (and your wallets) September 13th. 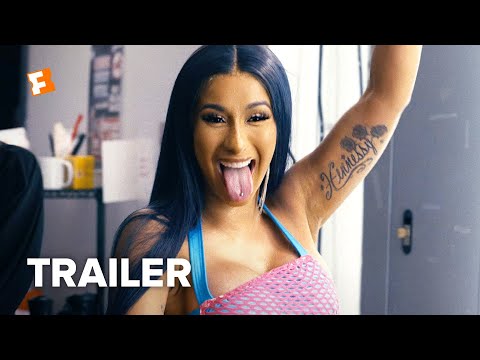