Setting the Stage: With their third album, Metal Galaxy, set to arrive next month, BABYMETAL have embarked on their first proper headlining tour of the United States. The Japanese band’s combination of J-pop and heavy metal has cast a wide net in terms of a following. Fans entering New York City’s Terminal 5 on Sunday night ranged from young women emulating the band’s style to 40-year-old metalheads who would fit right in at a Slayer concert. Adding to the theatrical vibe of the night, Swedish metallers Avatar would open the show with a vaudevillian set.

Taking the Stage: Wearing menacing masks that made them look like a cross between Slipknot’s Mick Thomson and the Nameless Ghouls from Ghost, the instrumental members of BABYMETAL’s band launched into “Megitsune” from 2014’s self-titled debut album. The band’s three Avengers, as they are called, then took the stage, with original members Su-metal and Moametal joined by a third mystery Avenger. Since Yu-metal left last year, the band has been employing various dancers to serve as the third Avenger (a Google search will turn up their identities for those who are curious).

From there, BABYMETAL performed the first of several Metal Galaxy tracks of the night, the high-energy “Elevator Girl”. The song shows the two extremes of the band’s musical spectrum, at times super poppy and at times as heavy as can be. Other Metal Galaxy songs performed throughout the night were “Distortion”, “Kagerou”, “PA PA YA!!”, “Shanti Shanti Shanti”, and “Starlight”.

What’s striking about a BABYMETAL show is the amount of preparation that must go into their concerts. Each and every song has its own unique dance choreography, meaning the three Avengers must spend hours upon hours rehearsing before setting out on the road.

The other thing that is quite extraordinary is that the mosh pit was absolutely insane. If you weren’t paying attention to the stage, and just looking at the fans on the floor of Terminal 5, you’d think you were at a Meshuggah or Lamb of God show.

While each member of the band is vital to the look and sound of BABYMETAL, lead singer Su-metal shines in the spotlight. Her singing has gotten stronger since the band started out nearly 10 years ago. Now 21 years old, she is a seasoned pro, delivering impressive vocals while dancing alongside the other two Avengers.

Outside of the Metal Galaxy songs, BABYMETAL also performed older favorites like “Gimme Chocolate!!”, “KARATE”, and the set-closing “Road to Resistance”.

Prior to BABYMETAL’s headlining performance, Avatar got the crowd going with a lively opening set. Looking like a circus ringleader, frontman Johannes Eckerström led the Swedish metal band through songs from albums Avatar Country, Hail the Apocalypse, and Black Waltz. The band earned a nice reception from the BABYMETAL fans, with Eckerström promising a longer set the next time Avatar rolls through New York City.

BABYMETAL’s fall U.S. tour continues through an October 16th show in Seattle, and includes their first-ever headlining arena show October 11th at The Forum in Los Angeles. The new album Metal Galaxy, arrives the same day as the L.A. concert. 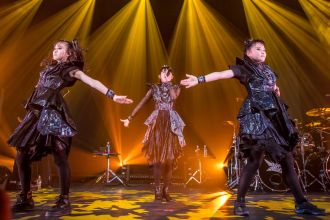