Pixies appeared as the musical guest on Late Show with Stephen Colbert on Wednesday night, having the nearly ironic task of performing after an appearance by Joe Bidden. Instead of getting cynically political, however, Black Francis and co. stuck to the script, performing their latest single, “Catfish Kate”.

The second teaser track off the alt-rock veterans’ forthcoming new album, Beneath the Eyrie, “Catfish Kate” plays out like The Decemberists wrote a Pixies song, or vice versa. The band delivered it like pure Pixies, however, which involved not a lot of action but an unimpeachable proficiency. Watch the replay below.

Beneath the Eyrie is out September 13th. After performing at The Cure’s Pasadena Daydream festival over the weekend, Pixies are gearing up to support the record with a European tour. North American dates are expected to be revealed in the near future, and you can get tickets to all the band’s upcoming gigs here. 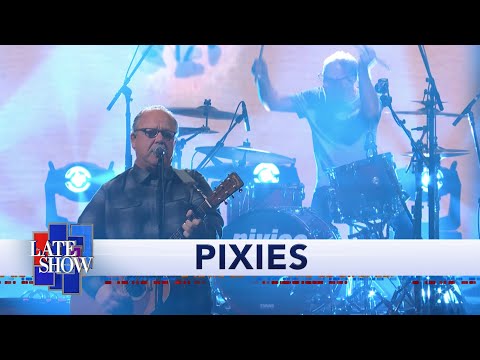