Beyond the Gates: It’s difficult not to compare last month’s Lollapalooza and this weekend’s Riot Fest. While the former operates on a far larger scale and runs an extra day, the two festivals take place only five miles apart (a mere hop away on I-290 West), both signal the dwindling days of summer in the city, and each one has become a Chicago institution.

But apart from similar technology in outdoor plumbing, the resemblances really end there. Lolla attendees skew younger and descend upon Grant Park from the suburbs in body stockings, basketball jerseys, and head bands, ready to partake of all a festival weekend in a major metropolis sans parents has to offer — as if a music festival were a micro-brewery sampler or a Netflix scroll. It’s become the go-to music event for an indecisive generation who have grown up with unlimited choices.

Riot Fest, celebrating its 15th year, couldn’t be more different. One look at the grimy legions of tattoo-calfed, potbellied, tallboy-nursing masses tells you all you need to know. These aren’t tourists out for a weekend stroll through Douglas Park. For them, Riot Fest isn’t about trying out reggaeton, taking selfies in the pit, or catching a glimpse of a celebrity during a set from the latest Top 40 pop sensation. These are festivalgoers who appreciate guitars, prefer songs performed in rapid-fire succession, and, more than anything, love hearing the anthems of their youth live for the hundredth time. It’s the reason that the hot dog and funnel cake line dwarfed the wait for crepes and vegan noodle bowls. These folks know what they want, and they aren’t about to change now. 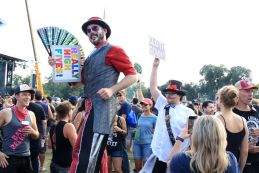 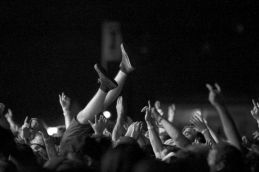 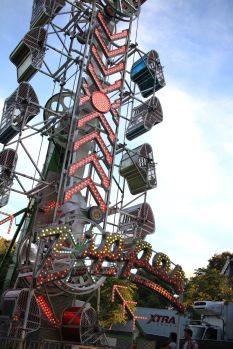 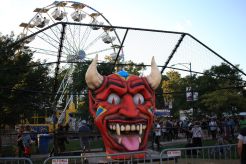 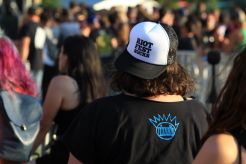 “This is Warped Tour for dads,” my fellow writer Samantha Lopez noted early on, an observation underscored by several graying men wearing Rancid and Descendents tees while pushing strollers across the grounds. (But a newborn wearing kiddie safety earmuffs, really?) They were grounds that bottlenecked, muddied, and proved too small at times (both to hold certain audiences and prevent terrible sound bleeds), with a stinging atmosphere that became eye-watering at some point mid-Saturday. But these motley, veteran festivalgoers weren’t going to let that stop them from a weekend that promised the opportunity to hear several classic albums played in their entirety, a last chance to bid farewell to an outfit of thrash metal pioneers who helped make so much of the music at Riot Fest possible in the first place, and, most importantly, three days of head banging rather than life’s headaches.

It’s with this mindset that we swarmed to Douglas Park this past weekend.

Best Bites: If you came to Riot Fest for fancy fare, you were either sadly disappointed or paid someone to smuggle it in for you. With a few exceptions, the booths and food trucks at Douglas Park this weekend catered to the carnival crowd (there was a Ferris wheel, after all) and those who had had three or four too many Lemmy cocktails (an Arnold Palmer with a kick). Cheesie’s Pub & Grub was there to serve up grilled cheese concoctions that typically get eaten around two a.m. on a liquid-filled stomach, and tents offered carnival staples like corn dogs, cheese fries, funnel cakes (delicious), and, for those wanting to clog a major artery or several, deep-fried Snickers bars and Twinkies. Hands down, the best fare of the festival goes to the good folks from El Asador for their mouth-watering burritos, tacos, and quesadillas. I’m not sure if one can fall in love with a burrito, but I came pretty damn close this weekend. –Matt Melis 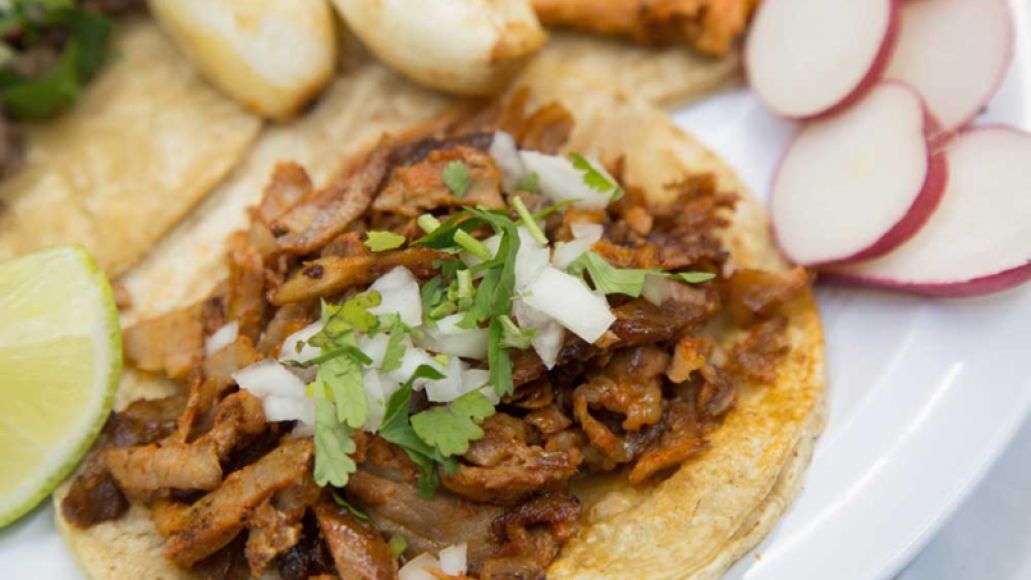 Festival Fashionista: Riot Fest is just Warped Tour for aging hardcore kids. So, with that comes a lot of Vans (who were even sponsors of the festival), Doc Martens, and hi-top Converse. It’s a phase nearly every one of us went through at some point in our youth, but to these folks, it’s the one they didn’t quite grow out of.

Where Lollapalooza is a fest for the bros and everything is glittery and pastel, Riot is for their counterpart, with a lot of black, stripes, fishnet, and leopard print. Except, you could tell this crowd wasn’t going out of their way or dropping a couple hundred on “festival wear.” These were just a few of the staple items in their closet. Okay, maybe they dusted off the special black mesh top for the occasion. Regardless, they looked sensible, they looked flawless, and they looked hardcore.

However, the real fashion winners of the weekend were those aging hardcore kids’ kids. Yeah, that’s right. Dad’s Warped Tour showcased some of the cutest hardcore babies, complete with miniature versions of the aforementioned shoes, little bandannas, and even tiny, spiked bracelets. Trust me when I say that nothing is cuter than a couple toddlers running around in little Vans while wearing Descendents t-shirts. –Samantha Lopez 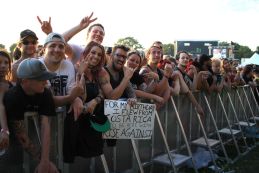 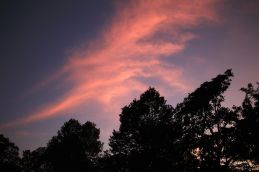 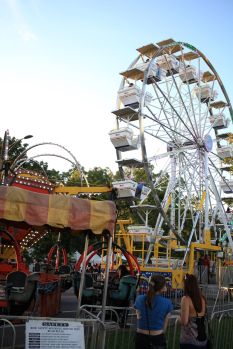 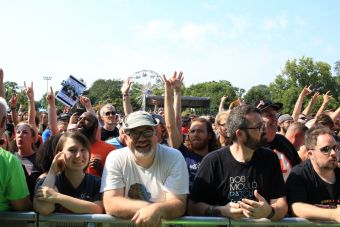 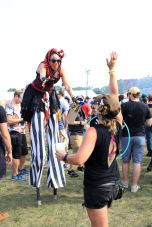 Douglas Park, We Have a Problem: Douglas Park is a pain in the ass to get to and leave from. Let’s set that problem aside for a moment. While the staff and grounds made Friday a comfortable evening, the park just wasn’t spacious enough to accommodate the larger crowds on Saturday and Sunday. Forget minor issues like bottlenecks, multiple sets at the Radicals and Rise Stages weren’t able to hold all those who wanted to see acts like Bloc Party, Wu-Tang Clan, or Taking Back Sunday. Sound quality was also an issue for much of the weekend (see: Blink-182), but the bleeds were excessively bad. Each night, the headlining Riot Stage absolutely drowned out Choice B at the nearby Rise Stage. Especially terrible was watching Bloc Party try to get a song or hook in edgewise against a Slayer performance that reigned down noise throughout the park. –Matt Melis 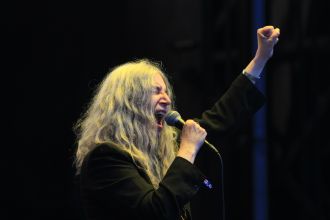 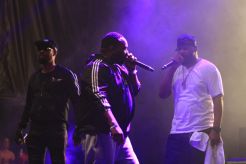 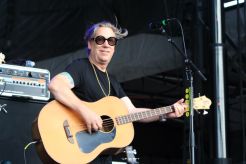 Bucket List Bingo: Some may call a lineup like this year’s safe, but it sure as hell offers younger fans — or Riot Fest first-timers — a chance to cross some major rock and roll items off their bucket lists. Nobody ever forgets the first time they hear “Blister in the Sun” (Violent Femmes), “Time Bomb” (Rancid), or “Gloria” (Patti Smith) from within a sea of singing thousands. There was the opportunity to hear classic albums from several bands like Ween, Blink-182, and Taking Back Sunday in full, not to mention the opening stretch of 36 Chambers (Wu-Tang Clan). Hell, just to find rare acts like Bikini Kill and Jawbreaker back on a stage, spot Scott Ian and Kerry King’s radical goatees, or witness Wayne Coyne’s hamster ball all make for must-sees over the course of a concertgoer’s lifetime. Just because you’ve seen it a dozen times doesn’t mean it’s any less awesome for the virgins. –Matt Melis 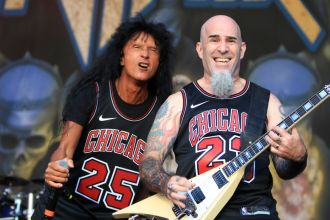 Nick Lowe and the Straightjackets at Riot Fest 2019, photo by Heather Kaplan 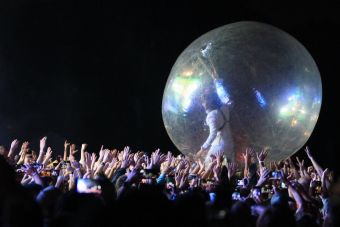 The Flaming Lips at Riot Fest 2019, photo by Heather Kaplan 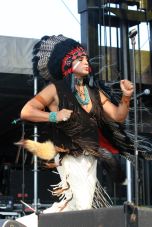 Spry Sexagenarians: If Lollapalooza now functions as a teenager’s My First Festival kit, and Pitchfork remains the refuge of our nation’s hippest twentysomethings, then Riot Fest is the natural domain of the graybeard. That’s not just an assessment of the crowd (although it certainly does skew the oldest of Chicago’s three major festivals): some of Sunday’s most energetic sets were performed by artists over 60. That includes two of the biggest crowds of the day for both the Village People and The B-52’s, whose farewell Chicago set prompted a shoulder-to-shoulder squeeze that extended almost all the way to Riot Fest’s iconic Ferris wheel.

While those acts used their sets to showcase their formidable catalog, others reminded those assembled that they’re still cranking out new stuff: Nick Lowe continued his surf-twang reinvention with Los Straightjackets during a criminally short 40-minute set early in the day, and Guided by Voices sprinkled in choice cuts from 2019’s Zeppelin Over China and Warp and Woof amidst a greatest-hits set that even included a reworked arrangement for “She Wants to Know”, which appeared on their 1986 debut, Forever Since Breakfast EP. At 61, Pollard maintained the festival’s highest song-per-hour rate, blowing through 21 hits in 55 minutes with the type of energy that inspired the band’s upcoming 100-song New Year’s Eve show in Los Angeles this winter. Guess we finally know what “endurance like the Liberty Bell” means. –Tyler Clark 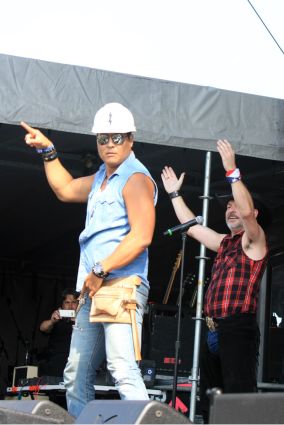 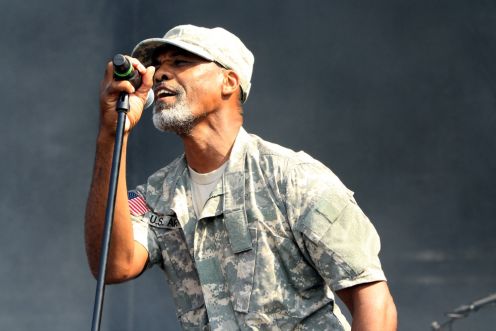 Disco Demolition: In July, Chicago marked the 40th anniversary of Disco Demolition Night, the infamous Chicago White Sox promotion turned riot that found local DJ Steve Dahl detonating some innocent vinyl while the city’s meatheads stormed the field around him. Pitched as a good-natured prank that got out of hand, the stunt has also come to represent the misguided rockist case against disco and dance music, as well as the undertones of racism and homophobia that accompanied scenes of white teens destroying art often made by and for the LGBTQA community and people of color.

With all this in mind, the Village People’s appearance at Riot Fest felt less like a novelty booking and more like evidence that times have changed for the better. Group co-founder Victor Willis made the most of the opportunity; flanked by a new generation of construction worker et. al., Willis ran through hits from “Macho Man” to “Y.M.C.A.” and drew one of the biggest crowds of the early afternoon in the process. Watching a park full of punks bop along to “In the Navy” felt a little like an olive branch and a lot like further proof that the punk ethos is at its best when it’s at its most inclusive. –Tyler Clark