Wata is one third of Boris, a genre-bending Japanese experimental metal group that has been consistently putting out their own brand of unique sludgy droning records since 1996. She is also one of the best guitarists of her era. Her unmistakable tone, relentless pursuit of the unexplored, genre defying flexibility, and pure shredability place her at the top of the guitar-playing world both in raw skill and innovation. While her unassuming figure and quiet demeanor serve as the antithesis of her playing style, her presence onstage is nothing short of huge.

The torrential waves of piercing noise and heavy riffs she has created over her three-decade career have served as the cornerstones of drone metal, sludge metal, and doom metal — and have ushered the genre forward from acts like Earth and the Melvins. In an era that lacks a universal bonafide guitar hero, no better candidate for the past 20 years of metal exists than Wata. The most perplexing thing setting Wata apart from her peers like High on Fire’s Matt Pike or Gojira’s Joe Duplantier is that the world hardly knows anything about her.

It’s clear that Wata is uncomfortable with such lofty claims. A self described “quiet child, and still the same way,” the girl from Hiroshima was pushed into playing the piano as a child. She’s quick to point out that her piano practice as a youth was “not voluntary,” and that she never really connected with the instrument. Although her parents pushed her into the piano, they never would have supported a career as a musician. “They didn’t particularly support it (at that time). My parents seemed to have thought that I was doing this as a hobby, and it was more like, ‘How long will you keep doing this for?’” Ironically, Wata’s brother is also in the music world, and has worked as the tour manager for B’z, the best-selling Japanese band of all time.

Wata grew up during the height of Japan’s visual kei movement, a style of heavy metal similar to glam-rock in America and popularized by bands like X-Japan and Dead End. While she does not see many parallels between the band and visual kei from a sound perspective, Wata definitely connects the band’s visuals to that era and understands the impact a unique look can create. “I used to listen to them often when I was a teen. I still go see Morrie-san (of Dead End) live, but the ‘genre’ such as visual kei does not matter, I’m more drawn to the artist’s strengths as humans. Of course, visuals are included in the elements when structuring sound. The public opinion could have been different on Boris if I hadn’t used a black Les Paul Custom [guitar] and an Orange [amp].”

Wata did not pick up a guitar until she was 16 years old, but the connection was immediate. Although she practiced frequently, she did not play in a band until she moved to Tokyo for college and joined a cover band with her friends playing indie and hard rock. “It was just fun getting to perform,” says Wata of her early band experience. Her seemingly endless well of creativity remained untapped until she met Atsuo (drums, vocals) and Takeshi (guitar, bass, vocals) and formed Boris in 1996, with the bandmembers being drawn together by a love of the Melvins and Pink Floyd. The floodgates opened quickly. Boris are one of the most prolific artists of their time and are now closing in on 100 releases since their formation.

Part of the mysterious aura Wata emanates whether she is onstage or not is due to her reserved personality. In just about any interview Boris has given since their inception, Atsuo and Takeshi do the vast majority of the talking. Wata’s answers tend to be brief and sporadic unless she is asked a question directly. For Wata’s disciples across the globe, it makes getting to know their guitar idol rather difficult. With the exception of a fantastic piece on her approach to making music and her favorite gear in She Shreds magazine, the woman tearing through some of the greatest solos in metal’s past 20 years has remained opaque in an era where a language barrier is no longer the significant detriment it once was due to social media. Following the band on various social media platforms for a little while will teach you Wata is a big fan of video games, Pokémon, and anything guitar nerd, but not much else.

In trying to uncover the woman behind the guitar, it seems like Wata is not all that different from what she presents nearly every night onstage. Although she refused to answer any questions about her family in order to preserve her privacy, she is unashamed in admitting to being shy. “(During interviews) it takes me a bit to come up with words, so even if I attend interviews, the conversation progresses and I get behind. Socializing is not my forte.” Using music as a vital way of communicating is as close to a worthless cliché as exists in music, but for Wata the premise seems appropriate. Her responses become much longer when discussing her process and musicianship than any questions relating to her personality or interests outside music and the conversation opens up much more when discussing her frequent collaborators outside Boris. The band has released numerous collaborative albums with artists like Sunn 0))), Ian Astbury, and Merzbow. When asked if such frequent collaborations are a challenge, Wata simply views them as learning experiences, “There isn’t anything (that I would call) a challenge. I just enjoy playing music with those who we have an opportunity to connect with. Each person (Boris collaborates with) has originality to their sound. Everyone has something I don’t have, and I’m able to learn from these experiences.

Her attitude toward collaboration reflects a larger attribute that has kept Boris relevant for so long — Wata relentlessly pursues evolution. One of the reasons why she is a one of the best living guitar players in the world is because she can mold her distinct tone into so many different playing styles. She credits her creativity to the band stating, “In general, (Atsuo and Takeshi) create the big frame, so it feels like dancing and swimming on top of it. The pedals are slightly different from time to time, it’s like surfing. Since various waves come, those may sound like various styles.” Before the band had a few interviews posted on YouTube, it was easy to be a long time Boris supporter without having ever heard Wata’s voice until the band released Rainbow in 2006, where Wata sung for the first time. Although she “still doesn’t feel comfortable” singing, her willingness to step up as a vocalist for the band shows that even 20 years into her career, Wata absolutely refused to stay stagnant. Even though she was not so sure of herself as a singer, she jumped at the opportunity to try something new. “The verses (I write and sing) don’t have messages. They depict landscapes or scenes, so maybe it’s abstract but easy to relate. It may sound like sounds with emotion because the voice is treated like an instrument when recording.” For an artist that has constantly reinvented herself, when asked if anything challenges her anymore she only mentioned, “It could be to continue on.”

Wata and Boris recently released their best record this decade, the double album LφVE & EVφL, via Third Man Records. The group just wrapped up another successful North American tour celebrating reissues of their classic records Feedbacker and Akuma No Uta, while previewing tracks off LφVE & EVφL. When discussing what new territory the band have embarked on with the new record, Wata is abstract. “It’s like Boris’ map expanded again and now it’s three dimensional? It could be a connection between the messy chaotic sound and melody that sounds like music.” Listening to the record makes this answer much clearer. The album is droning, sprawling, dynamic, and calculated all at once. Like much of the band’s classic material, it traverses a wide range of sounds yet remains unified by an ominous general atmosphere that can be created only by Wata’s thick fuzzy plodding style. Long time followers of the band know to expect the unexpected, so in that regard Boris have delivered again.

Wata will never advocate for her own place in metal history, so it’s about time others picked up the slack. When discussing her legacy she quaintly states, “It’s not something I’ve thought of. It hasn’t hit me that I’ve been (influential), but I’m extremely happy being told they like my guitar playing style.” Boris recently performed at Chicago’s Lincoln Hall near the end of their tour. When the band took the stage, Wata’s behavior was typical: stoic, silent, and concentrated. The moment Wata turned off the fuzz for a cleaner tone, she briefly approached the mic to sing one track. There were audible cheers from the crowd, a sign they were relishing this sure to be brief moment of hearing Wata’s voice. Her singing sounded soft and her voice had the occasional tremble. As soon as the crowd let Wata soothe them with her clean tone, measured guitar playing, and faint vocal passages she pummeled the sold-out 500 person capacity room with a heavy sludge riff that surged the crowd into a frenzy. The juxtaposition between Wata’s voice and the roar of her guitar may be the easiest vehicle to understand who Wata really is. There was nothing she was hiding or leaving unexplored. Wata is simultaneously the quietest and loudest person in just about every room she enters, and the crowd showered the stage with cheers no matter what side she was choosing to show. 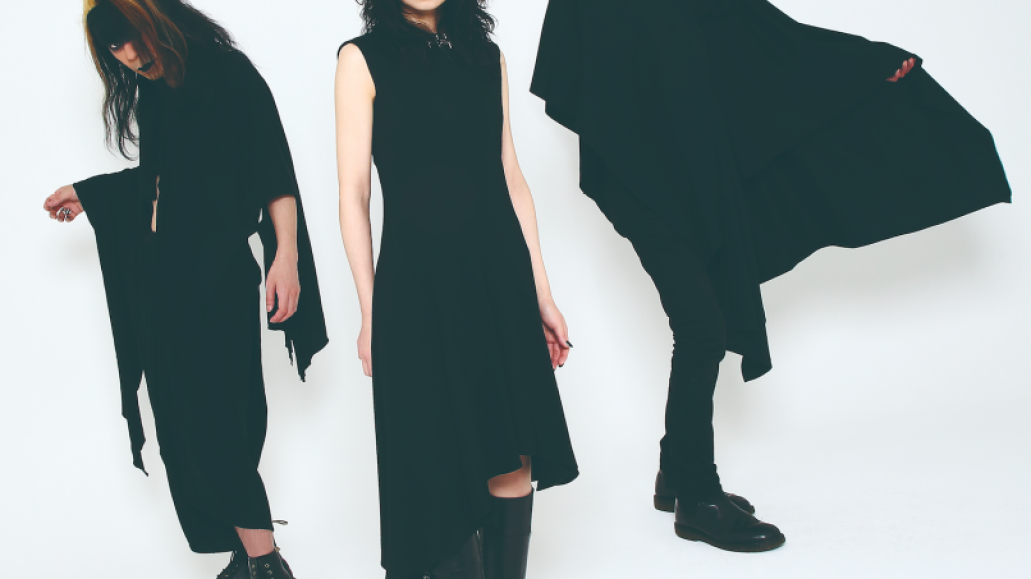 Our thanks to Boris guitarist Wata for taking the time to speak with us. See the band’s upcoming tour dates, and pick up the latest Boris album, LφVE & EVφL.

Boris Guitarist Wata Is as Quiet as She Is Loud ...